Last year, Brittany and I used BCA Float 36 airbag backpacks. We liked them, quite a bit in fact, but we also liked the improvements we saw with this year’s Float 32, so we decided to upgrade. For our review of the 36, as well as quite a bit of info on why we’re using airbags and believe that they are an important safety device that everyone who backcountry skis should consider, click HERE.

Here’s the way I look at airbags. If I took a test in school and got a 99%, I’d be pretty pleased with myself. However, if I ski 50 days in the backcountry every year, and my avalanche decisions are correct 99% of the time, I’ll get caught in a slide every other year. Yes, this is way too simplistic, but the fact remains that if you’re out there a lot, you might just make a mistake, assuming you’re human. If that happens, it seems to me that stacking the odds in your favor as best you can with an airbag makes sense.

Last year’s Float 36 weighed in at just under 8 pounds. While it carried the weight well, it was still noticeably heavy when you picked it up. This year’s Float 32 has a reported weight of 6.4 pounds, which makes it almost a pound and a half lighter than similar sized offerings from ABS (and other ABS-based packs like Dakine and TNF) and Mystery Ranch. The Mammut RAS 30L is just a hair heavier. BCA dropped the weight in part by streamlining everything and making a very simple pack. For instance, last year’s pack had a back panel access- which I like, but the weight of this year’s pack is noticeably less, which I like too. I guess it depends on your outlook for which approach is better.

With that said, I love how streamlined many parts of this pack are. Check out the avie gear compartment- the first word that comes to mind is “clean”: 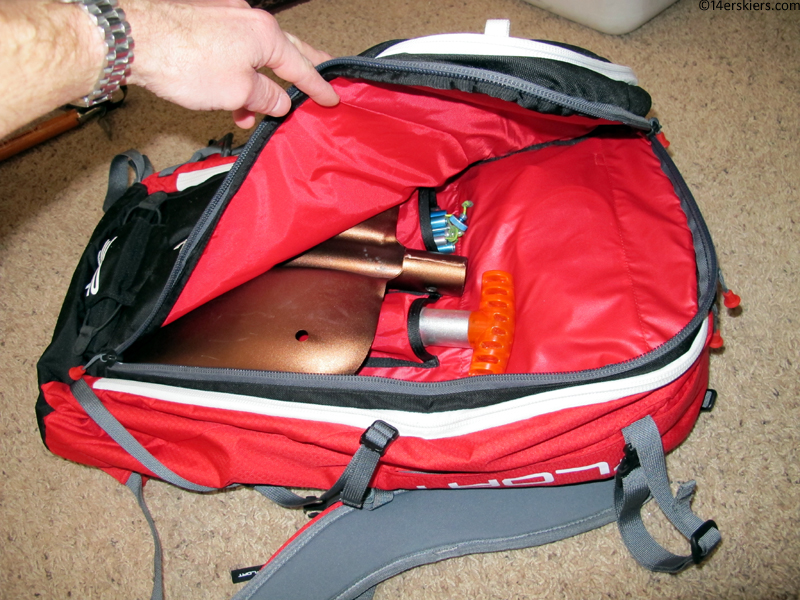 Similarly, the canister and associated parts of the airbag itself are tucked cleanly away, but not in an entirely separate compartment like the 36, which wasted space and added weight. 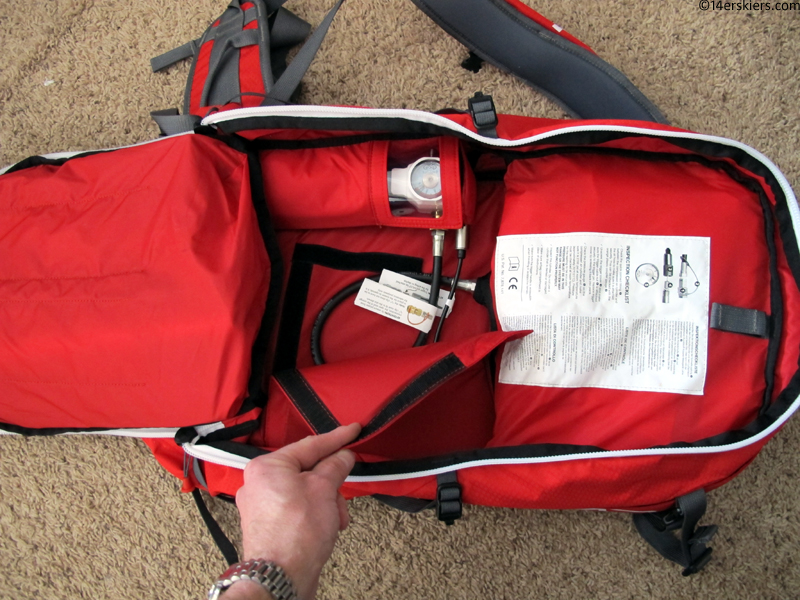 On to some of the nice amenities. The ice axe attachment is quite simply the nicest I’ve ever seen. By a lot. Check it out: 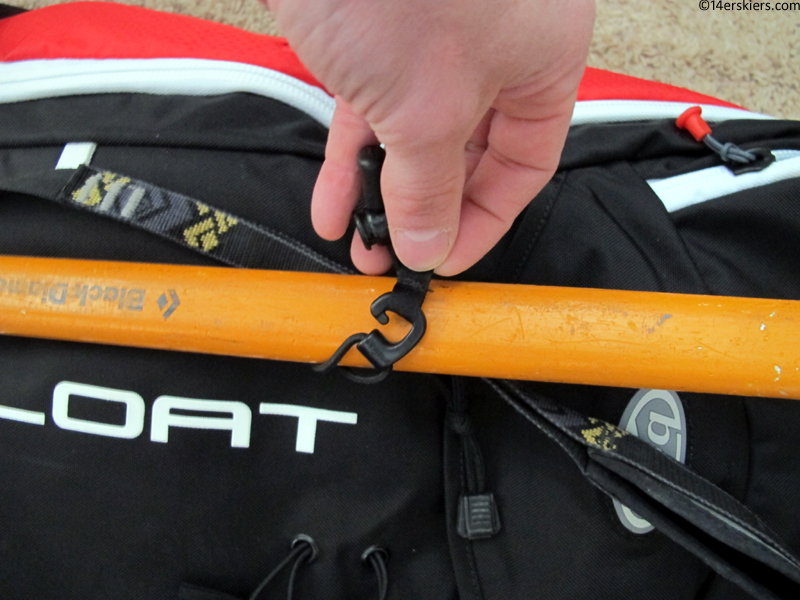 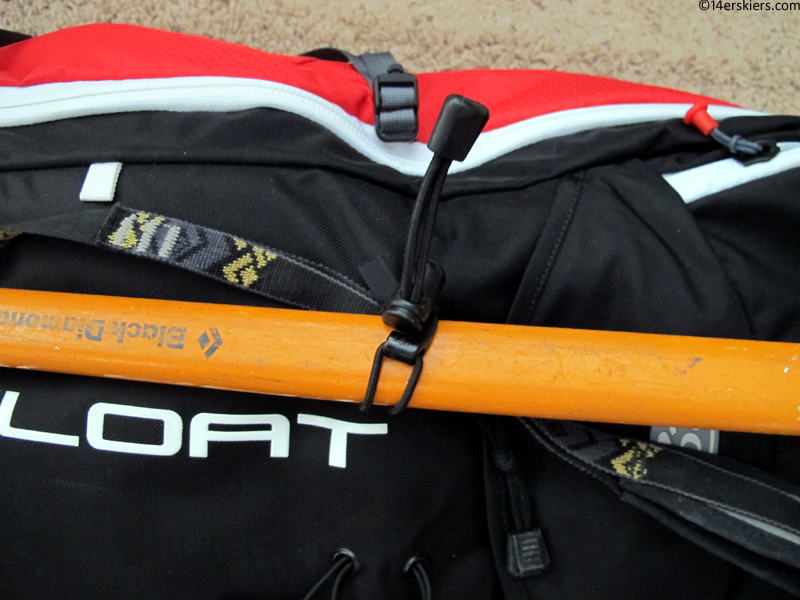 The helmet attachment is improved this year, utilizing the same clips as the ice axe attachment. Easy to do even with gloves on. 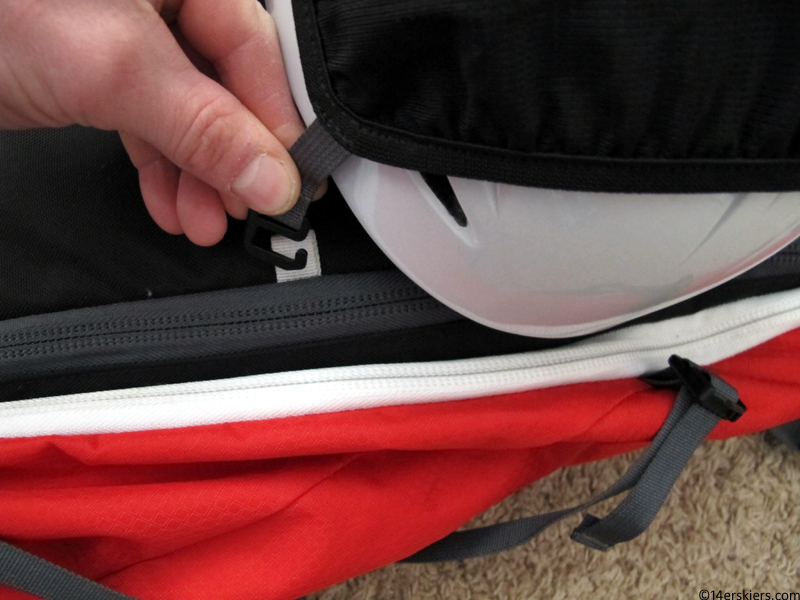 Last year, the skis could be attached vertically or diagonally, but this year it’s pretty much diagonal only. There are side compression straps, too, which helps keep the skis from flopping around when the pack is somewhat empty. 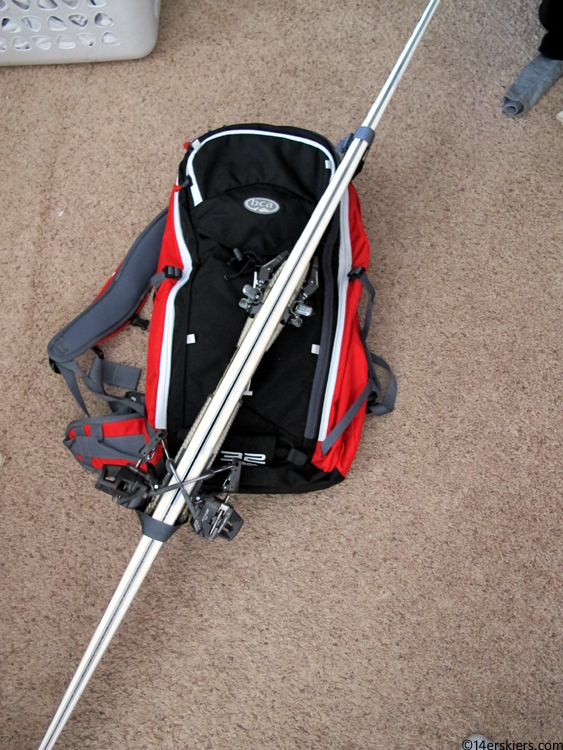 The first time I tried to use the ski attachment, however, I broke it. (The strap should double back through the buckle, but that part is gone). 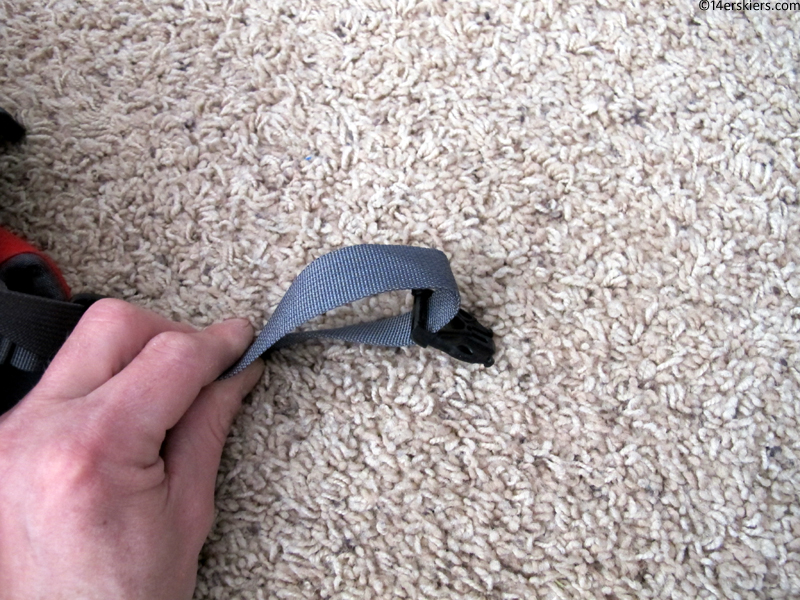 Granted, I put some force into it, but nobody wants the strap loose so their skis are flopping around. What bugs me more is that every manufacturer, whether BCA or anyone else, has to have their own slightly different buckles. It used to be that when something like this broke, you just walked into your local store and asked for a 3/4″ or 1″ Fastex buckle and you were on your way. Or better yet, you just had it in your repair kit. Now you have to call and get the part. Luckily, Mark Peterson at Function Before Fashion was able to rig something up for me before I took off to Canada. Speaking of which, if you’re wondering about traveling with an airbag pack, here’s our experiences from last season.

The goggle pocket is similar to last year, and fleece lined- but with a full pack it feels really tight and I’m a little worried I could break a goggle lens when the pack is stuffed to the limit. 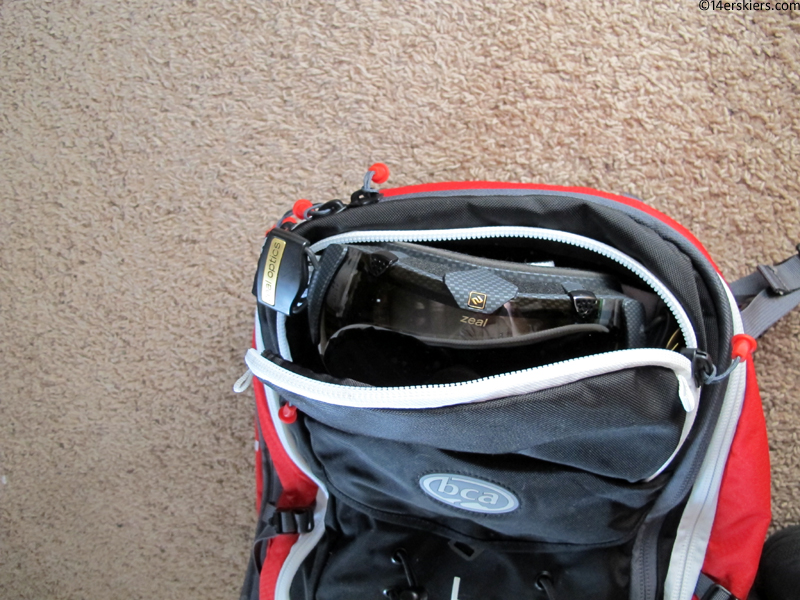 Speaking of packed, just what can you put in this pack? Well, on this tour

in the Coast Mountains of BC, I asked a lot out of the pack and it came through with flying colors. In addition to all the “normal” items one would have in a pack like food, water, extra layers, and avie gear, I added a 30m rando rope, crampons, harness, and ice axes. The Float 32 carried it all like a champ. It would take some planning, but I bet I could even do an overnight hut trip if I worked on packing it just right.

This year’s pack straps are adjustable at both the top and bottom of the pack, which makes it easy to adjust for a range of torso sizes, and the trigger or water hose can be moved to either side depending on your preference. Slick. Nicer still, the airbag and cylinder can be removed if you’d like to use the pack when the avie danger is low, or interchange the components with the smaller Float 22 for shorter tours. 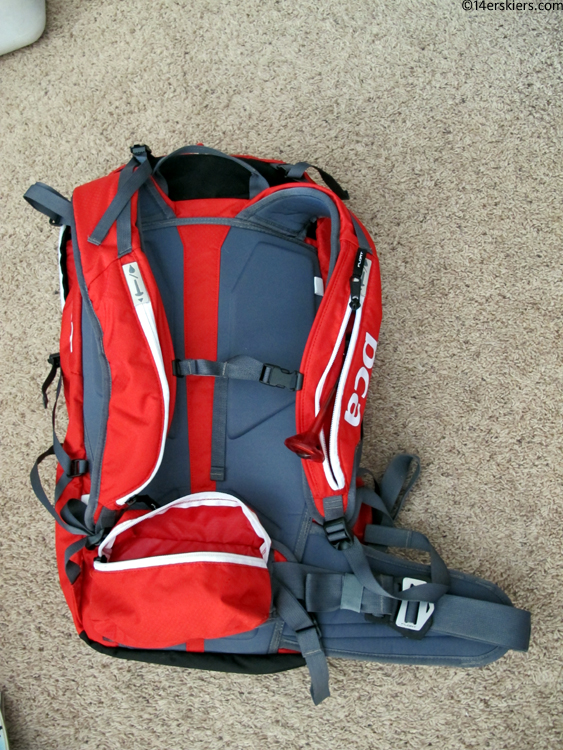 In summary, BCA took a pretty good pack in the 36 and made a great one in the 32. Could it be better? Of course. It could be even lighter and cheaper, and I do miss having a hip pocket on both sides like the 36. I’d love it even more if it were a top-loader, too, although that seems tough to do with BCA’s airbag system. But at the end of the day, I like this pack a lot. It carries well, it’s functional, and I’ll even admit I like the colors. I hope I never have to use it.

When Frank and I debated if we should throw down the money to invest in upgraded BCA airbag packs this year, it didn’t take me long to say yes. In fact, I insisted on it. The improvements in the pack were too much to ignore. Frank has mentioned most of them, but here’s the ones that made the new Float 32 an easy choice:
* Much better diagonal ski carry system. With the old pack the skis flopped around, especially when the pack wasn’t full. I often carried an extra ski strap just to try to cinch the skis down a little better on the pack. The new ski carry system on the Float 32 is “flop-free”.
* The pull trigger can be moved. Furthermore, it’s installed on the left side, making it easier for right-handers to grab that pull cord when they need it most.
* A pound and a half lighter – and noticeable while skinning.
* Better use of the pack space available.
* Separate compartment for avy tools.
* Compatible with hydration systems. In the Float 36, a small hole had to be cut to let the water hose through. In the Float 36, the hose can run through either shoulder, opposite of where the pull cord is located. The only fluky thing, is that the bladder sits in the main part of the pack along with the rest of your gear, with no pouch for separation. I chose to wrap my bladder in a light stuff sack to protect it just a little. One problem- when a full bladder is hanging on the velcro tab inside the pack, it will open up the airbag zipper, at which point you have to fully open the airbag zipper and re-zip it. It’s not ideal and you may want to just put the bladder inside the pack with no attachment at all.

What I miss:
* The Float 36 had 2 large hip pockets. The Float 32 only has one. I like having both – one for the camera, the other for food. Now, the food sits in the goggle pocket, and is sometimes a pain to get to while skinning.
* The Float 36 had back panel access at the bottom of the pack, which was great for accessing those tough to reach items. I miss it. But, I’ll take the weight savings over the access.

What stayed the same:
* The Float 36 carried heavy weight very well. It was always distributed properly on my back. The Float 32 keeps this same capability.
* The overall design of the pack stayed the same, with some tweaks in features, which we have mentioned above.

Overall:
BCA listened to user feedback and improved their pack. If you haven’t purchased an airbag pack yet, the Float is a fantastic and affordable option. Furthermore, the Float has and will continue to save lives…. maybe even yours.