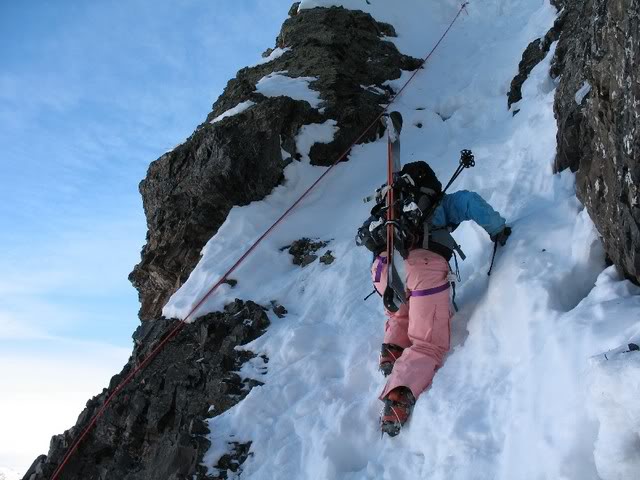 Today marks the anniversary of one of my very best ski days ever. Unfortunately, I was too busy to actually post a memorable TR. Later in the season, when life was less hectic, I was able to sit down and recount my favorite ski day. But, I shared this story with very few people. Since today is the anniversary, I have been reminiscing about this experience last year. It’s time to share it now. I’ve included the story below, along with pictures beneath it.

Wow, do I wish we had snow like we did last year!

All that I could hear was the “tink-tink” of my crampons on the ice and the sound of my heavy breath, both muffled by the ear covers on my helmet. Before me was blue ice and behind me the mountains were glowing pristine white. It was me in pink, against the blue and white, with my skis on my back, as I rappelled down the ice fall.

I shouted, “Pete, where are you?” I could hear the sound of his voice in the crisp air, but what he said I could not comprehend. But that didn’t matter. I knew Pete was below me somewhere and I just had to find him.

I looked below me for any sight of Pete in his orange puffy jacket. But there was no orange, only blue and white. I looked back toward the ice to continue my rappel and as my head turned I suddenly felt myself drop four feet. My stomach churned and my hands clung tight to the rope. But, I stopped. The anchor was stable. The rope had simply put too much tension on the side of a tiny pine tree and had jumped to the other side of the tree. I remembered watching the tree suffer as Pete began his rappel, and wondered if the rope would ever give it reprieve from bending sideways and rubbing away its bark. I guess this time the rope decided to give the tree some relief.

I continued my rappel. The blue and the white blurred together in my eyes. Then I heard a voice beside me. It was Pete, perched on a ledge. He was not at the bottom of the ice fall, but rather beside it on a cliff. I released the rope from my harness. It was Frank’s turn now. We shouted for him to begin his rappel. I clung to the snow on the cliff’s ledge as tight as an Eagle holds it’s prey, wondering how we were going to get down to the bottom of the ice fall.

“So, what’s the plan?” I asked Pete. He pointed up and to our left at a tree. “Once Frank gets down, I’ll climb up there and set up another anchor for us to rappel the rest of the way.”

My mind wandered as we waited for Frank to arrive. The night before, Frank and I were at a birthday party when Pete called. When the conversation ended Frank said, “Remember that ice-fall chute I was pointing out today when we skied Purple Palace? We’re going to ski that.”

That’s how we ended up on the snow-covered Slate River Road in the morning, sledding up to the basin beside Cascade Mountain. The skin up the backside of the mountain was easy, but the rappel was adventurous: two 60 meter rappels, one having a very severe double fall line. What we do to seek out good ski lines.

Two hours after beginning our first rappel we were finally ready to ski. And what a ski it was! The snow was grippy Styrofoam, perfect for setting an edge and making aggressive turns. I turned to Frank with a big smile on my face, “I am totally digging this right now! Happy Birthday!”
“I couldn’t ask for a better way to spend my birthday!” Frank said. Some people have a party on their birthday, some people eat cake. Frank skis a line which requires two full-rope length rappels to access. This was his birthday present wrapped in a perfect package.

We rendezvoused at the bottom of the couloir. Pete, Frank, and I looked back at the line in awe, all with blissful smiles on our faces. The blue and the white glistened like diamonds. Cascade couloir was our jewel. It was the perfect day and the perfect line– the delight that all backcountry skiers are searching for. As we turned toward the valley I soaked in the sparkle of the blue and the white one last time. I couldn’t ask for a better November day in Crested Butte.

Me climbing up to the second rappel.