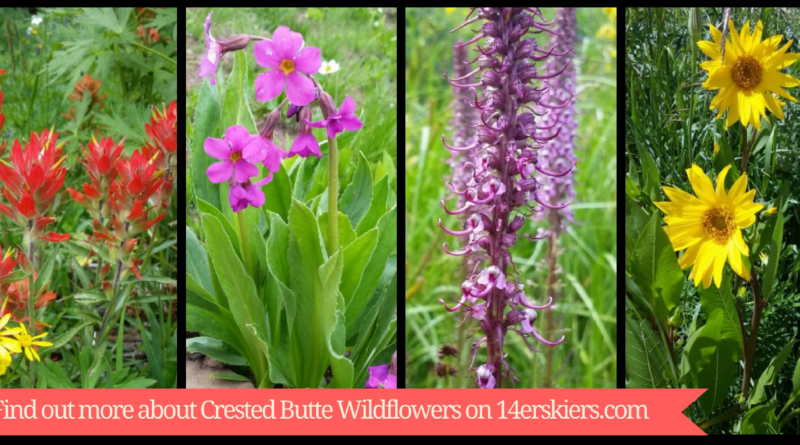 Crested Butte is often called the Wildflower Capital of the world. After years of living and enjoying this area, I can say that this statement is quite true. I’ve traveled all over the world and all over the state of Colorado. I honestly have yet to find a place that tops the wildflowers that we have here in Crested Butte.

As part of the celebration of beauty, we have been posting pictures of Crested Butte wildflowers every Wednesday during the wildflower season, which is typically June through August. You can search for these on Facebook, Instagram, and Twitter under the hashtag #wildflowerwednesday. You can also find them below. At this time, the collection below is only a small representation of the wildflowers in Crested Butte. We are still continuously updating our wildflower posts on social media as well as this page. So, please check back regularly.

The Crested Butte wildflowers below are generally organized by color. Note that each thumbnail image below can be enlarged by clicking on it. To return to the normal screen, simply click again on the enlarged photo. 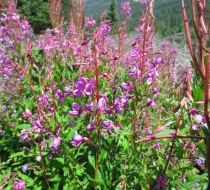 Fireweed or Chamerion angustifolim typically signifies the end of summer. Other common names are willoherb, cottonweed, and blooming Sally. It's flowers bloom on the lower part of the flower and as it ages it blooms higher up the flower. It is said that summer ends when the last flowers bloom at the top. Fireweed is often found on terrain disturbed by events like avalanches, landslides, and burn areas. 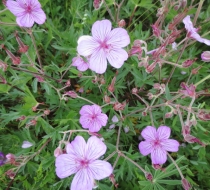 Pink Geranium typically grow in more sunny, open, sagebrush regions. They grow throughout the summer and are different from their cousins, the white germanium, which prefers to harbor in shaded forest. 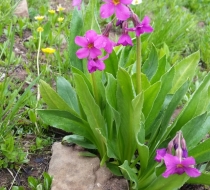 Named after Charles Parry, a 19th-century botanist, this bright pink flower decorates the alpine and subalpine areas near streams and marshes. Parry's Primose is typically not found until mid-to-late summer but it is the tallest of the primrose family and can grow up to 18-inches high! 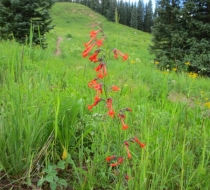 Also called Fairy Trumpets or Skyrockets, Scarlet Gilia (Ipomopsis aggregata) is actually part of the Phlox Family. Due to it's bright red color, many people often call this "paintbrush", but it looks nothing like a brush that would paint anything. The flowers, in fact, look like little red trumpets. They are typcially found in drier grassy slopes and meadows in montane environments from June through August. 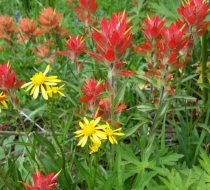 Scarlet paintbrush or Castilleja miniata, can often be found in alpine meadows and montane forests alongside sulphur paintbrush. In fact, the two can even hybridize. Compared to some of the other paintbrush varieties, scarlet paintbrush can tolerate a little drier and rockier conditions. 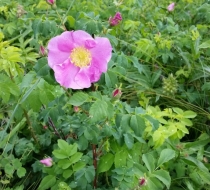 The wild rose (Rosa woodsii) have beautifully deep pink petals and prickly stems with thorns. They tend to grow in subalpine environments from June into the beginning of August. 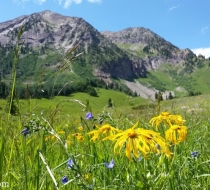 Sneezeweed, also called Swamp Sunflower or Helen's flower, tends to grow in mountain meadows that are a bit more moist. It's dried flowers are sometimes used in snuff, hence the more common name. The flowers of Sneezeweed tend to be very droopy and dark yellow - almost orange in color. 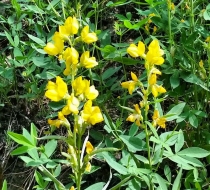 The scientific name for Golden Banner is Thermopsis montana. It is a member of the pea family, so sometimes it is referred to as "yellow pea". The three-cluster parted leaves are the best identifier to distinguish this plant from other similar ones. Golden Banner grows quickly after snow melt and tends to grow under aspen trees. They tend to grow in large colonies and prefer cool, moist forests. 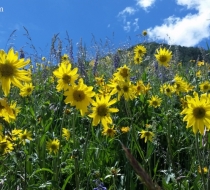 Aspen Sunflowers are abundant in Crested Butte beginning in late June and into the beginning of August. Their flowerheads have the unique trait of almost always facing east toward the rising sun. Often confused with Mule's Ears, which tend to grow in the same areas, Aspen Sunflowers tend to be a paler yellow, grow taller, have smaller leaves, and have smaller flowerheads. 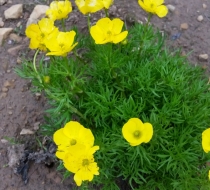 Alpine Buttercup, Ranunculus adoneus, is most commonly found in alpine areas shortly after or during snowmelt. It is pollinated by flies instead of bees. Since flies are more hardy in colder climates than their bee counterparts, these alpine buttercups tend to be plentiful in the alpine areas of Colorado. 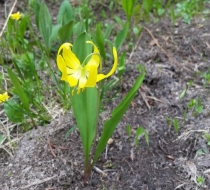 Glacier Lily (Erythronium grandiflorum) is a species of plants in the lily family commonly found in the mountains of western North America It is known by several common names, including yellow avalanche lily, glacier lily, and dogtooth fawn lily. These edible flowers can have leaves that grown up to 20 cm and stalks reaching as high as 30 cm. 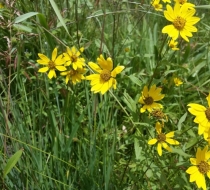 Showy Goldeneye is the smallest yellow sunflower and tends to bloom in August. These flowers tend to grow fairly low to the ground and have about 20-30 flowerheads per plant. These are often found in the same fields with fleabane. 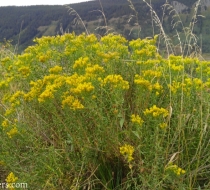 Common Rabbitbrush, or Ericameria nauseosus, often blooms in early fall. It often cohabitates with sagebrush. The Latin description incorrectly leads people to believe that rabbitbrush has a bad odor. But, smell it yourself. We think it smells pretty nice :) 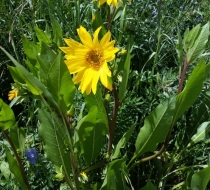 Mules Ears (Wyethia amplexicaulus), part of the Aster Family, are named after their leaves which resemble the shape of a mule's ear. They tend to have large flower heads, about 5" in length. Typically found in meadows and grassy slopes, Mule's Ears are often confused with Aspen Sunflowers. But, they tend to be a bit darker yellow, shorter, and have larger flower heads than Aspen Sunflowers. 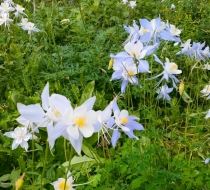 Blue Columbine are the state flower of Colorado and it is unlawful to pluck a columbine in this state. The blue represents the bright Colorado sky, the yellow represtents gold ore, and the while represents snow. The Latin word "columba" means dove because the flower petals hold a dove-shape at certain angles. 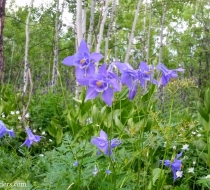 Purple Columbine is another variety that is more rare in Crested Butte. Nectar can be found at the base of the spurs of columbine, attracting pollinators like butterflies, bees, and hummingbirds. 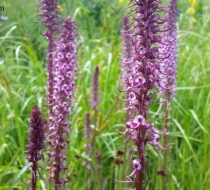 Elephantella groenlandica is also commonly called Elephant Heads or Elephant Flower. The heads are tiny, but delicate and beautiful. They are usually found in montane to alpine zones near water, like near streams or wet meadows! 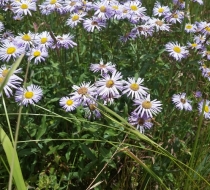 Fleabane is a member of the sunflower family and is named for its ability to ward off fleas. They are often confused with asters, as they really do look nearly identical. Fleabane tends to grow in late June or July through August, whereas asters typically grow more in the late summer months of August and September. Another way to distinguish fleabanes from asters is to look at the phyllaries on the underside of the flower. Fleabanes tend to have one or two neat rows of phyllaries, whereas asters will have overlapping rows like shingles. 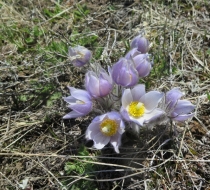 This lavender-colored flower was once called "wild crocus" by pioneers, but it is actually a member of the buttercup family. Pasque flowers are some of the first wildflowers to appear in the spring, and they often appear in foothills meadows with sagebrush. They tend to grow 6 to 8 inches tall and can be found in various hues from bright red and deep purple 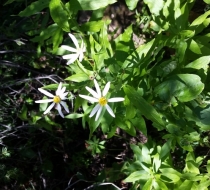 Wood aster typically grows in clumps that are up to 2.5 feet tall and has small but abundant white flowers that aspan about 1 inch across. It prefers shade and slightly drier conditions. 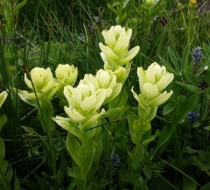 This cream-colored flower is perhaps misnamed as it is named after the yellow color present with sulphur. Most often found in mountain meadows and forests, this is commonly found along with scarlet paintbrush. In contrast to some other paintbrush varieties, Sulphur Paintbrush has hairless leaves and bracts. 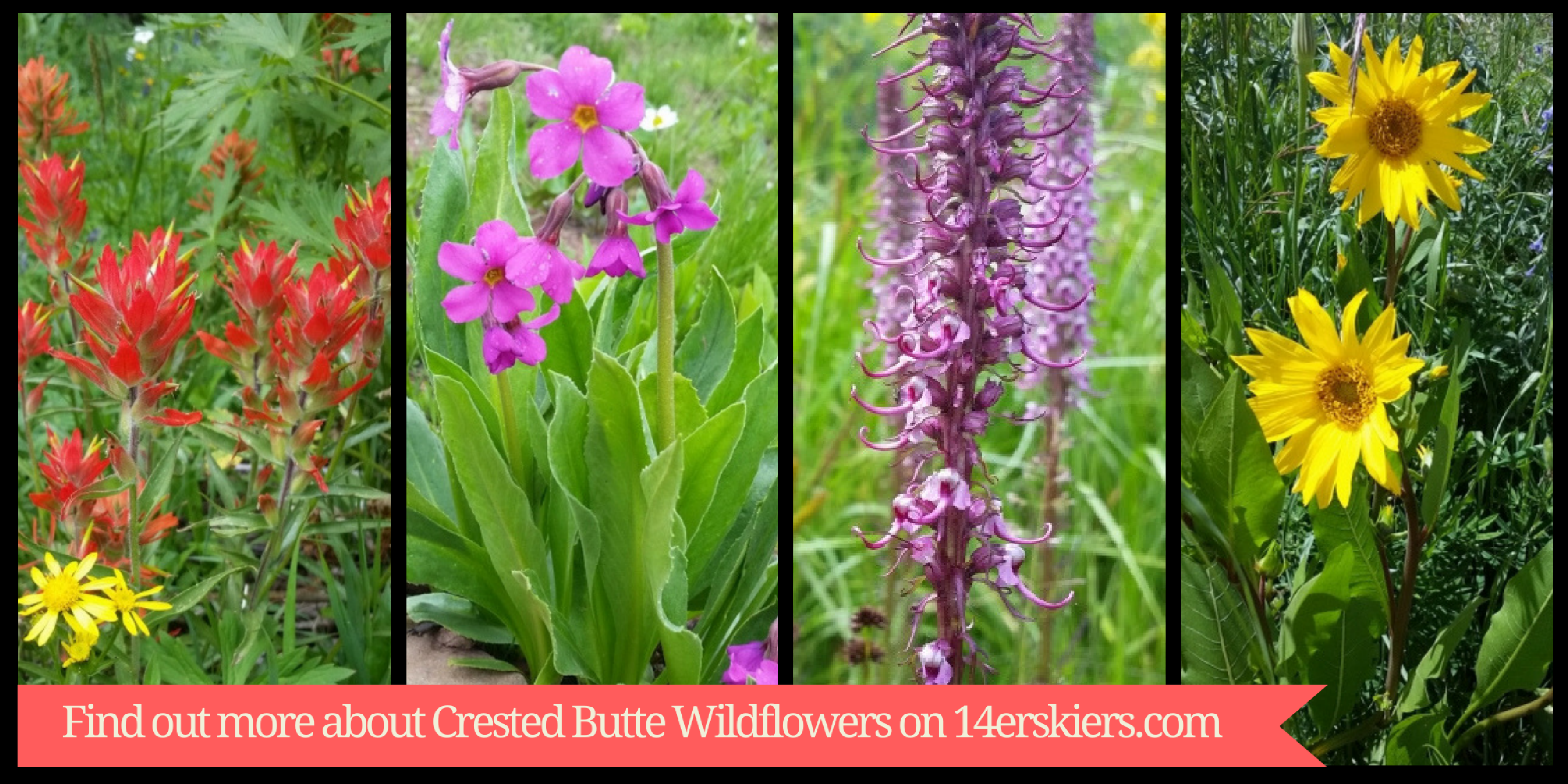 Article Name
Crested Butte Wildflowers
Description
Find out more about Crested Butte wildflowers and see for yourself why this area is called the Wildflower Capital of the world!
Author
Brittany Walker Konsella