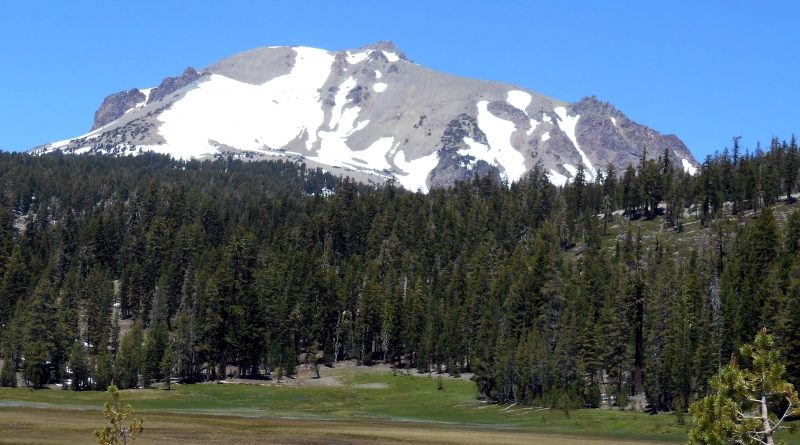 After a day’s stop in Salt Lake City to visit friends, I continued on my voyage. Lassen Peak was to be the first ski. I was meeting my friend Pam who was coming from a family visit in the bay area. We had plans to meet at a campground near the southeast entrance of Lassen. 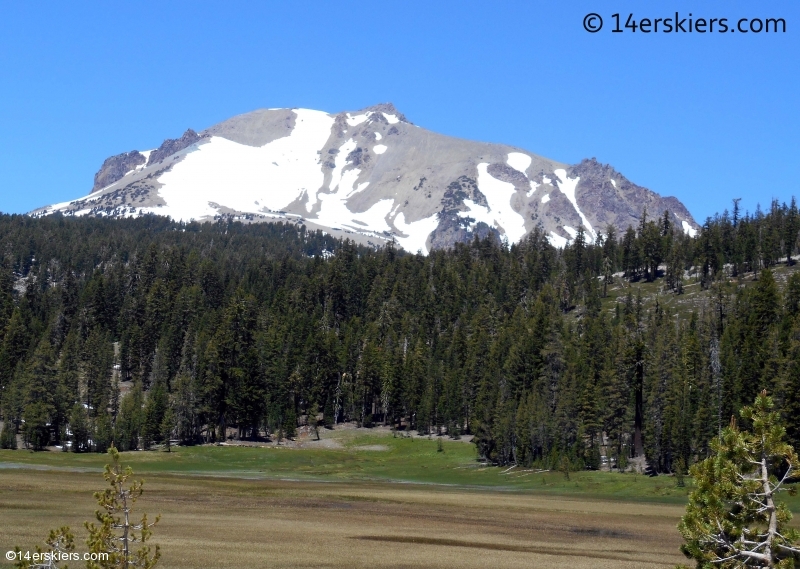 I took a brief stop at the Great Salt Lake Desert to admire the salt flats.

It was around that time that I noticed I had dust particles inside my lens. Not outside, but inside. Granted, I was using my secondary camera, which was my backup for my primary camera. Perhaps it was fortuitous that I dropped the camera only a couple of hours later, bringing this fine piece of technology to it’s final death. After a quick stop in Reno to pick up a new camera, I was on my way again.

Nevada can be beautiful in places.

But, the wind blew horrendously across I-80. I spent an hour driving through a dust storm, eventually to find its source:

This 2×2 mile area was creating a dust storm that trailed for about 100 miles.

That night, Pam and I camped in the beautiful California forest. Home for the next couple of weeks: 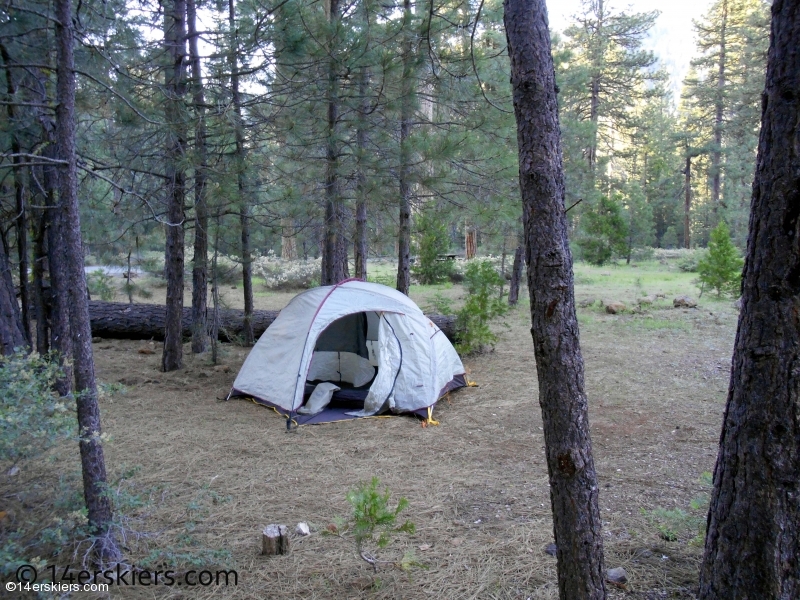 Lassen Peak is popular among tourists, but it still stands in the shadow of Mount St. Helens. The St. Helens eruption of 1980 was recent enough for most people to remember. And many forget that Lassen had its own series of eruptions from 1914 to 1917. These eruptions were historically photographed by B.F. Loomis:

That being said, Lassen Peak is being loved to death. Last year, Kim and I tried to ski Lassen, only to find that it was actually “closed” due to trail reconstruction. This year Pam and I hoped to beat the closure of the peak which typically happens after snowmelt. Information on this peak closure was hard to find and inconsistent – even speaking from one ranger to the next. A ranger Pam spoke with on the phone said the closure didn’t really apply to skiers if they stayed on the snow. Yet, another ranger who emailed us after we had skied Lassen said that it was closed to all travelers.

I am not sure if our ski was actually “legal”. There was a trail crew arriving as we were packing up from the ski. We did ski it long before the trail crew arrived. In my mind, the park service needs to have a more clear message for skiers about the actual closure of the peak. We were not the only people skiing it that day.

Lassen peak receives epic amounts of snow and is noted for often having snow depths around 20 to 25 feet. However, this year, with California’s drought, that was not the case. As we approached Lassen in the morning from the south, we wondered where all the snow was. 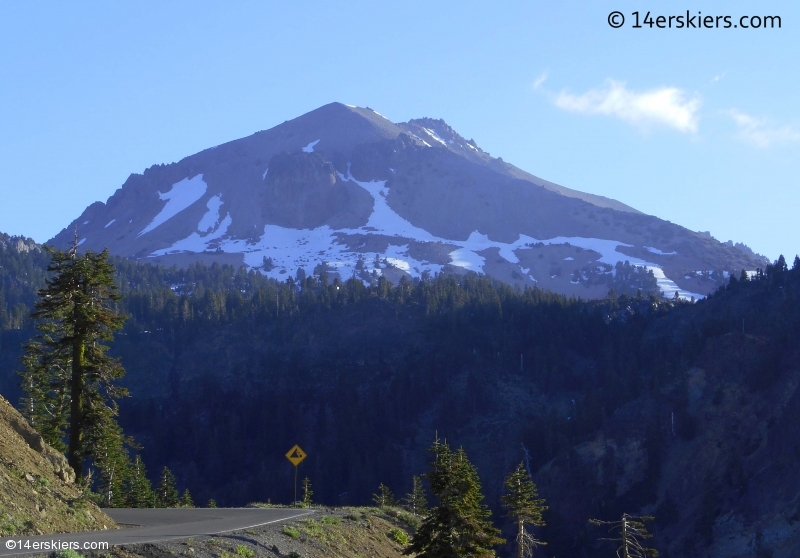 We drove around to the southeast to take another look. Ah, there’s some snow after all! 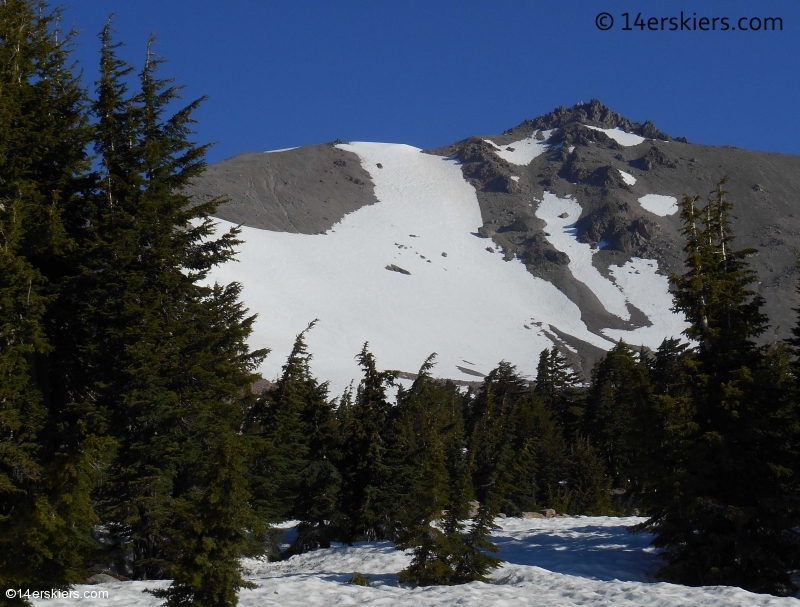 From the trailhead parking lot, Lassen is an easy climb. We found ourselves up at the summit in no time. The summit crater: 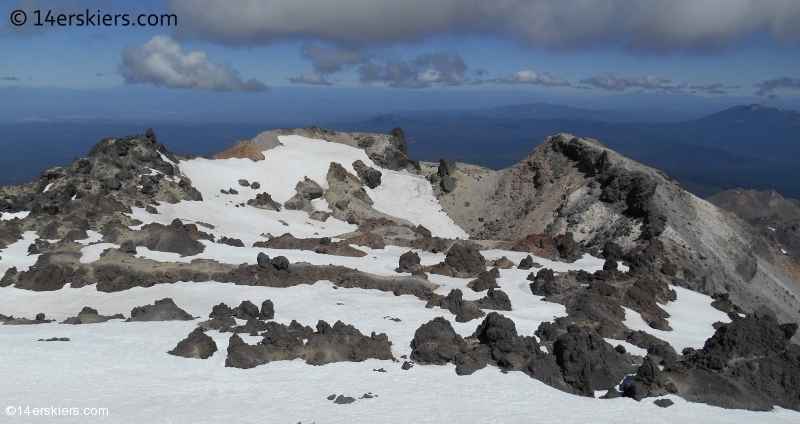 Pam on the summit block. 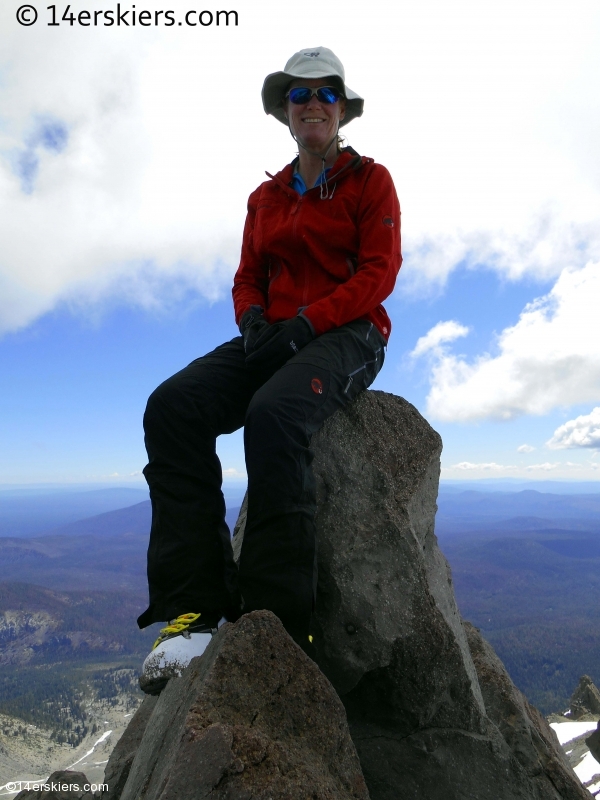 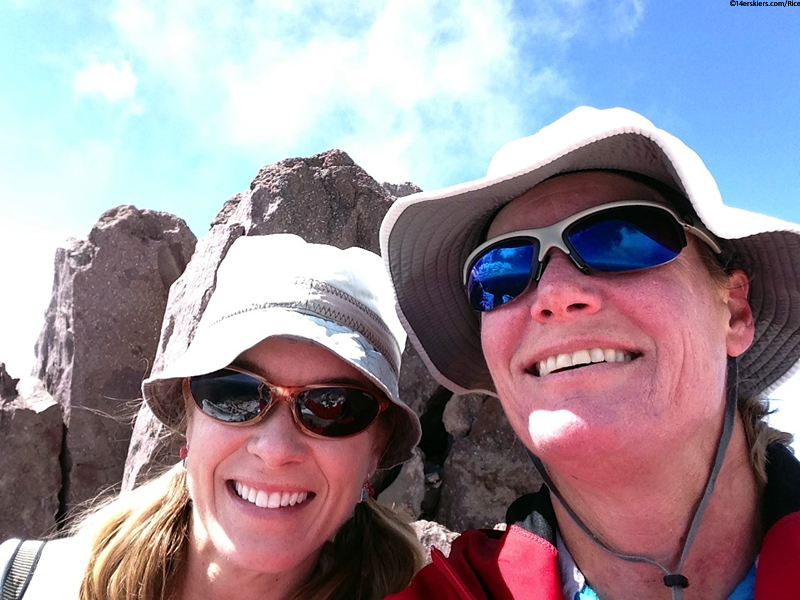 Our original plan was to ski the north side, then climb back up and descend the SE side. Pam looking down the north face. 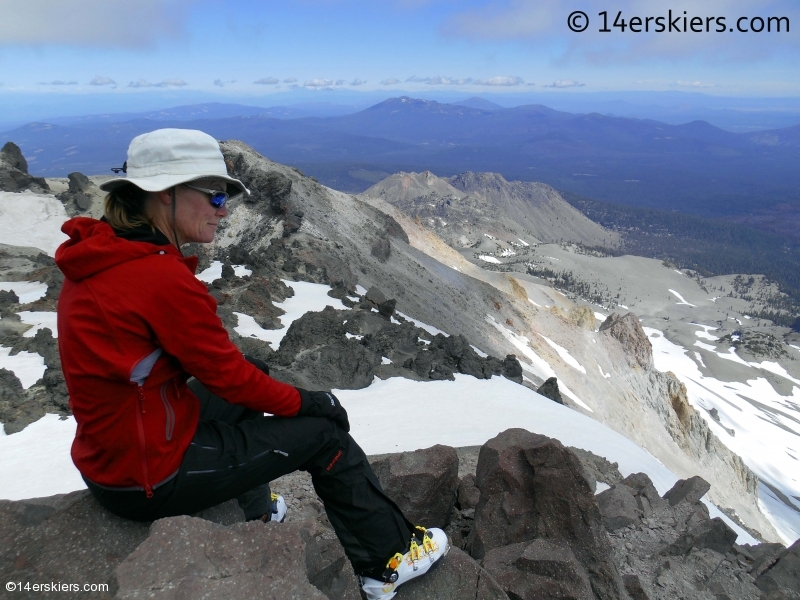 The north face looked skiable, certainly. But, it didn’t look fantastic. Knowing that conditions were definitely sub-par, we decided to save the north face for a better year and save our energy for Shasta the next day.

Looking down the north face. The dirtiness of the snow and the runnels half-way down does not show: 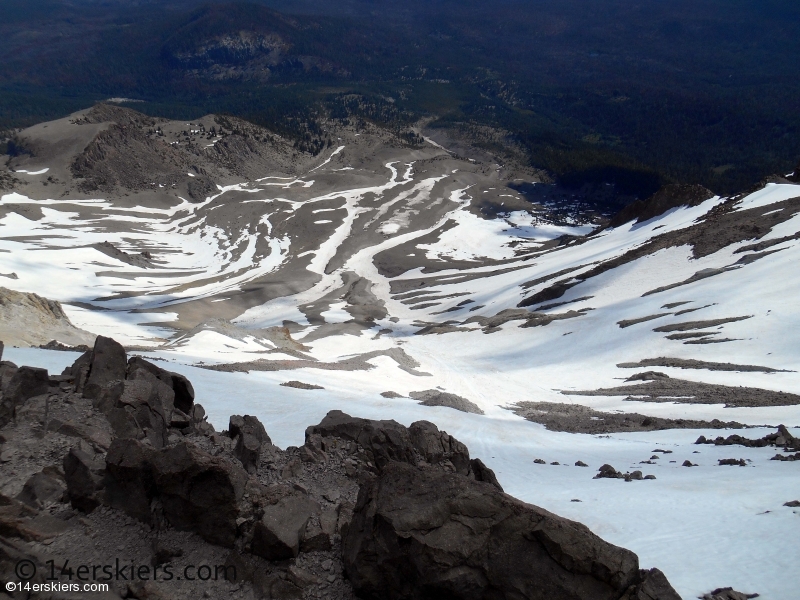 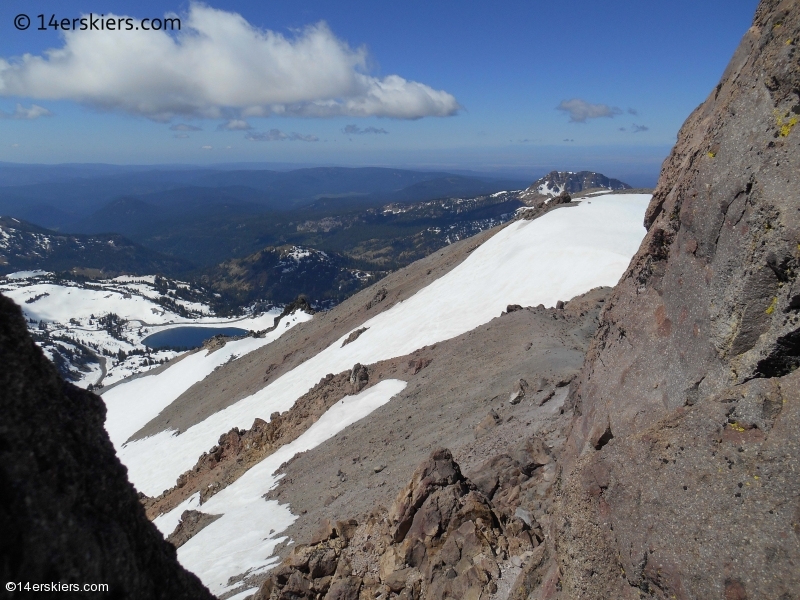 Shasta, peaking in and out of clouds. 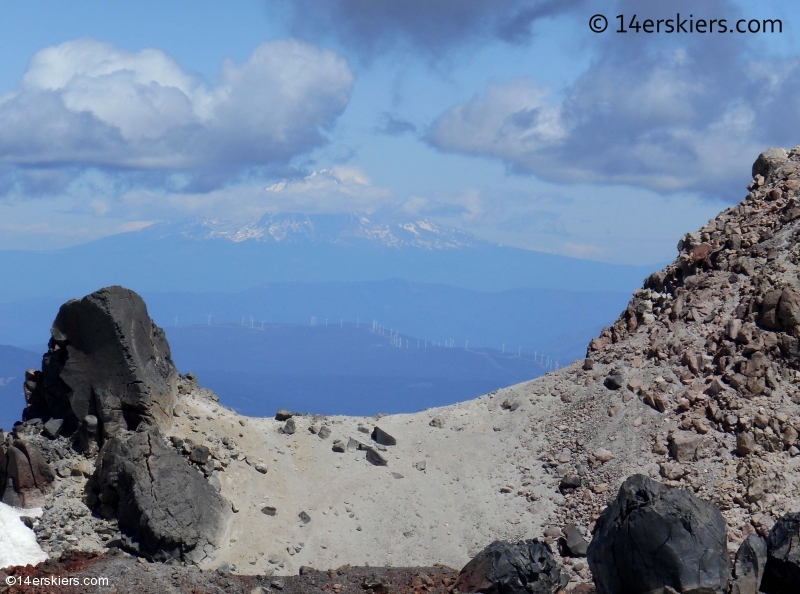 The ski down the southeast was actually pretty good. Pam. 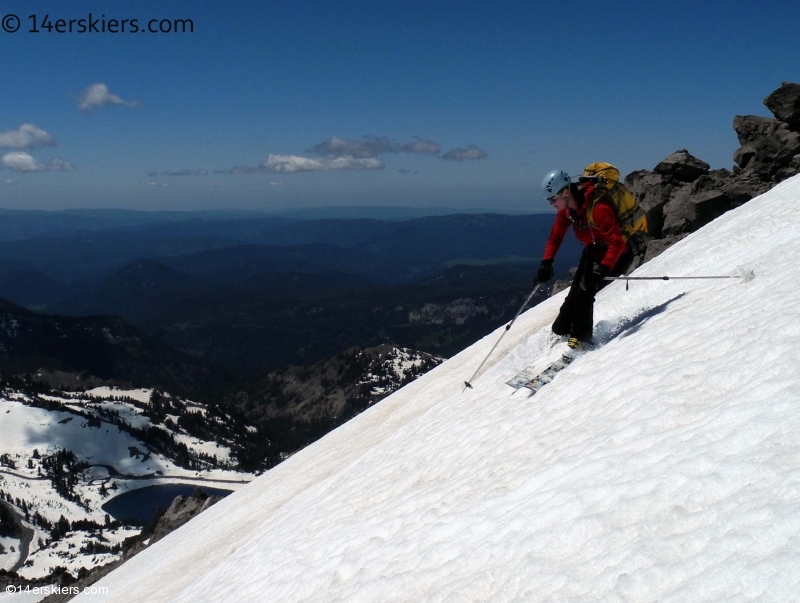 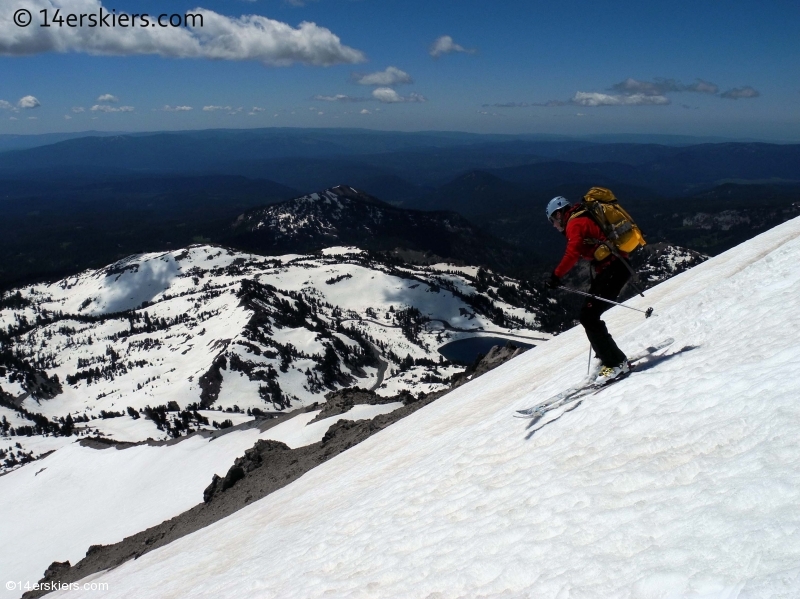 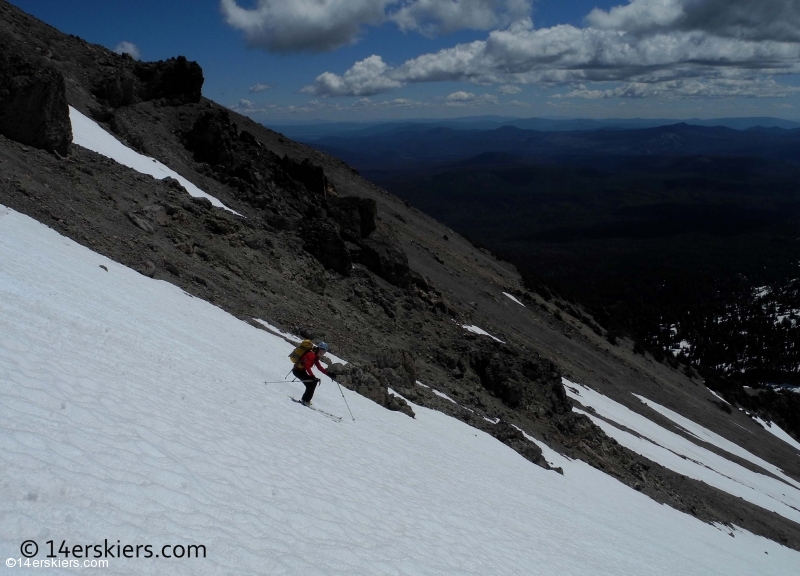 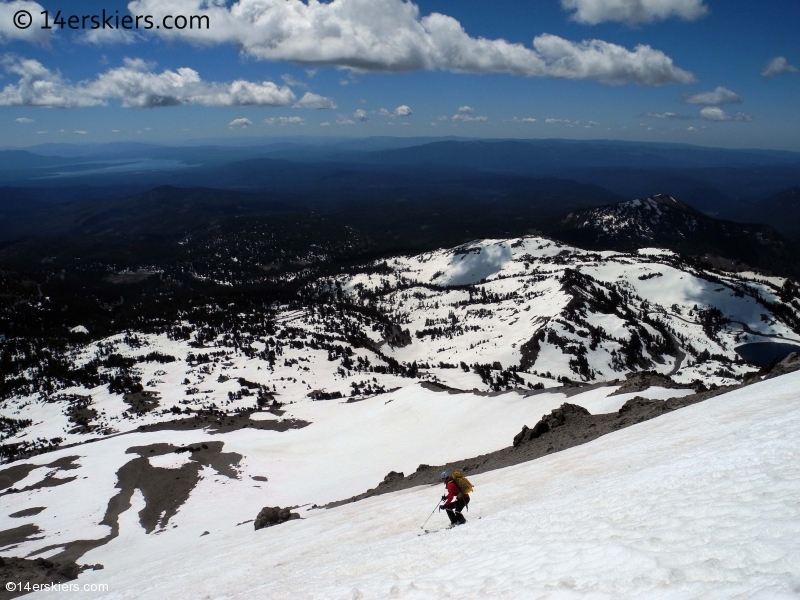 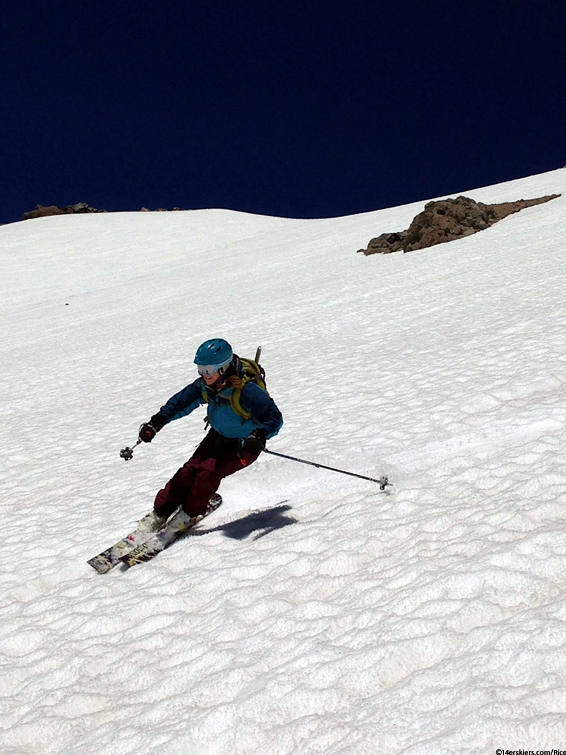 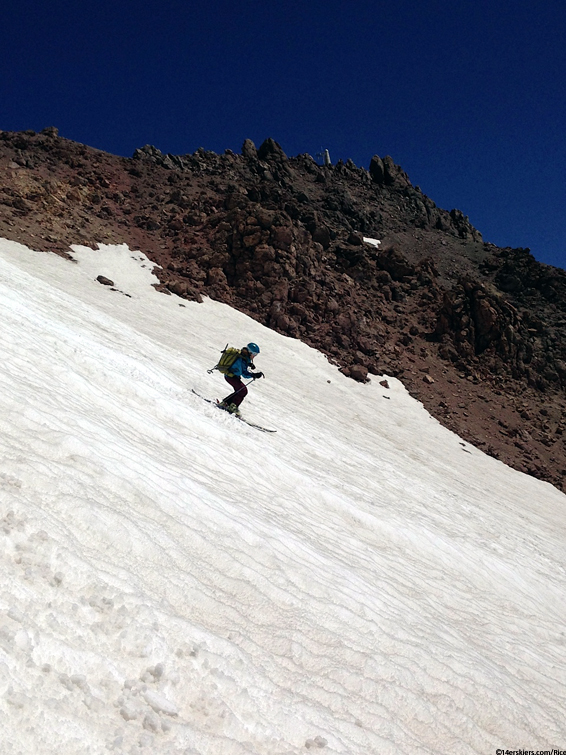 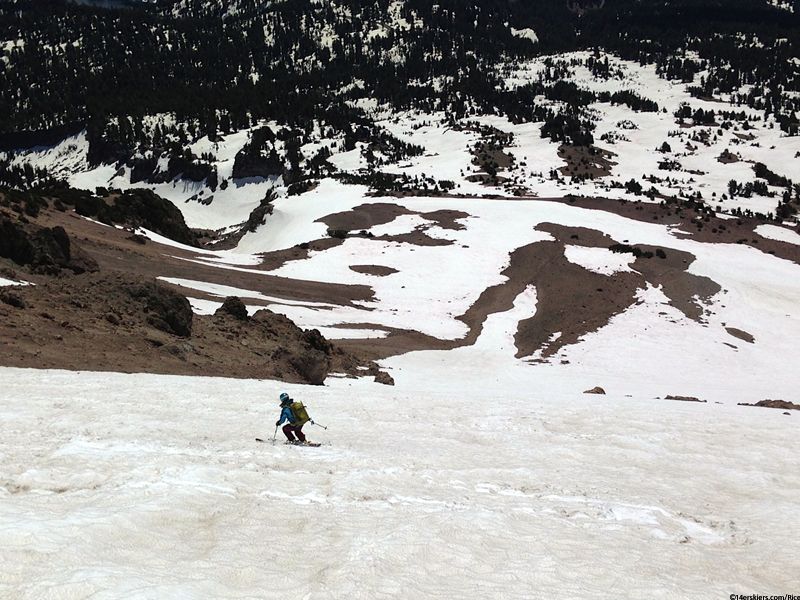 In fact, we were able to ski about 2000 feet down and wrap around on snow all the way to the parking lot. 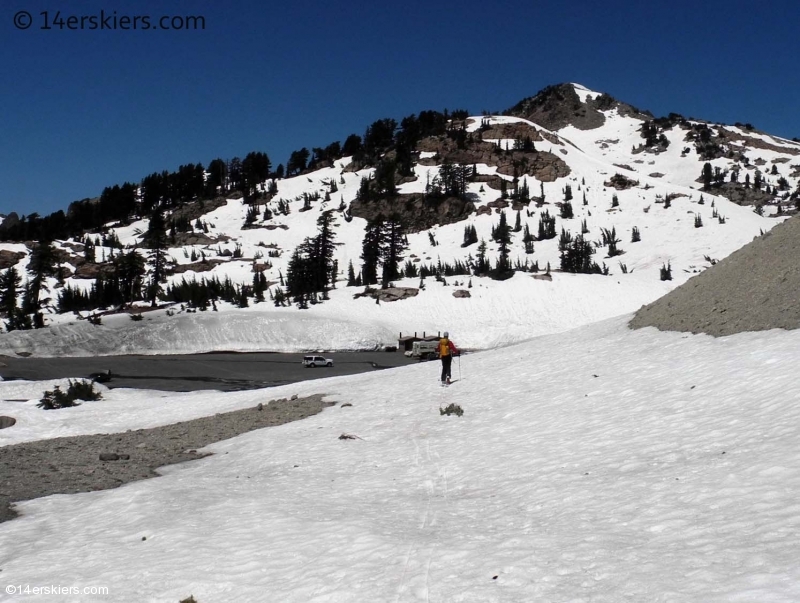 On the way out of the park, we stopped to take another look at Lassen’s north face. Can’t wait to ski this all the way to the road in a better year! 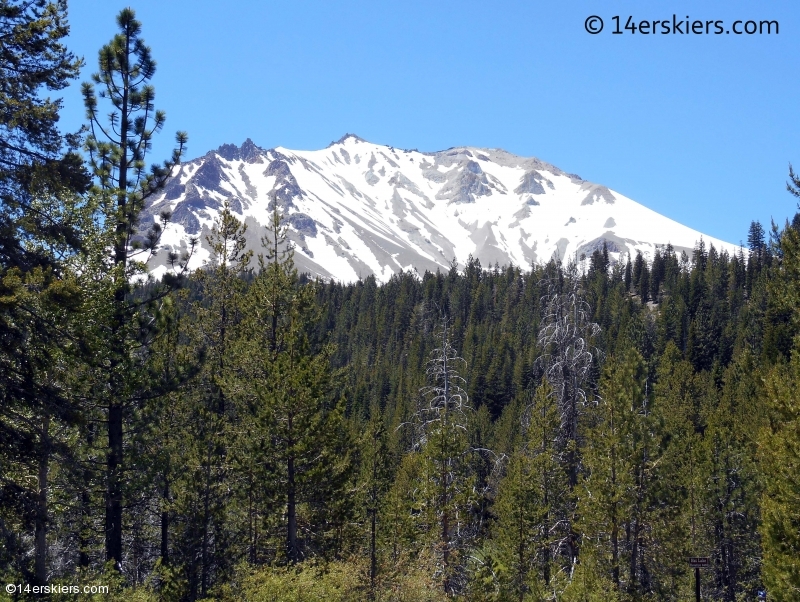 Although we didn’t ski the north face, we still enjoyed turns on the SE face. Lassen was a short but sweet success and a great way to start off our trip. Next stop, Shasta!