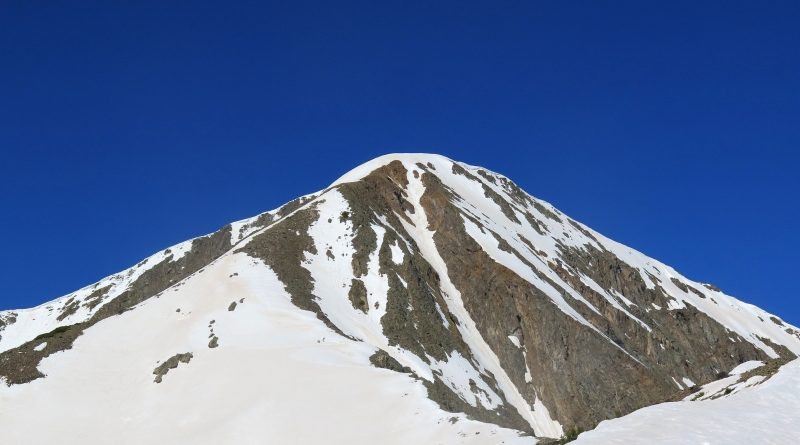 After Brittany returned from her successful trip to Washington which included a descent of Mount Rainier via the Fuhrer Finger route, she was keen to keep skiing. We skied Baldy near Crested Butte and found disappointing conditions more reminiscent of 4th of July skiing than late May, which is typically some of the best skiing we find. I wasn’t feeling as bad about my lack of skiing in her absence after skiing Baldy. Still, areas to our North had a more average winter, so we packed up and skied Drift Peak on the 25th and Savage Peak on the 26th.

Our day on Savage Peak started poorly. We Brittany and I were joined by Natalie and Jay) should have just taken the trail, but thought we’d save time on the road- this lead to a cold crossing for most of us, and an extra cold crossing for Jay who took a little slip and subsequently lost his pole basket as well. Eventually we started making better time although the trail was certainly in its in-between stage- too much snow for easy walking, and not enough to just put the skins on until close to treeline. Given how much sun the Northeastern facing Savage couloir was already getting, not to mention the rockfall danger, we decided to take the ridge route. The view of the couloir from the ridge was impressive: 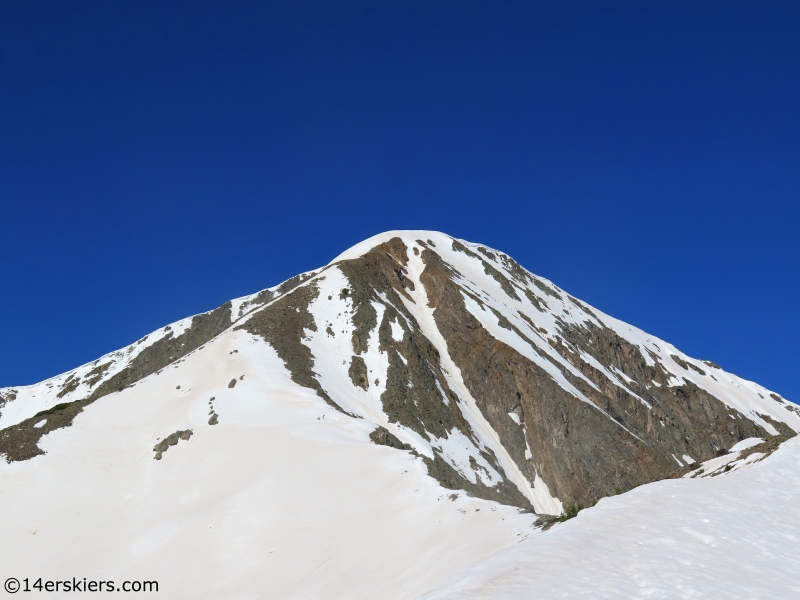 From this angle, the couloir practically looked vertical, not to mention it had a giant runnel running down the middle. We continued towards the summit, though no one was quite certain they would actually ski it. The good news on the ridge was that I found a Black Diamond basket sitting on the rocks on the ridge, which I promptly gave to Jay- an exact match to the one he lost, though it did have a few marmot tooth marks on it. The summit had great views, especially since I had never been on a summit in this area. We were surprisingly close to the Roaring Fork Valley, Ruedi Reservoir, and Red Table Mountain where we did a long adventure bike ride back in 2016. 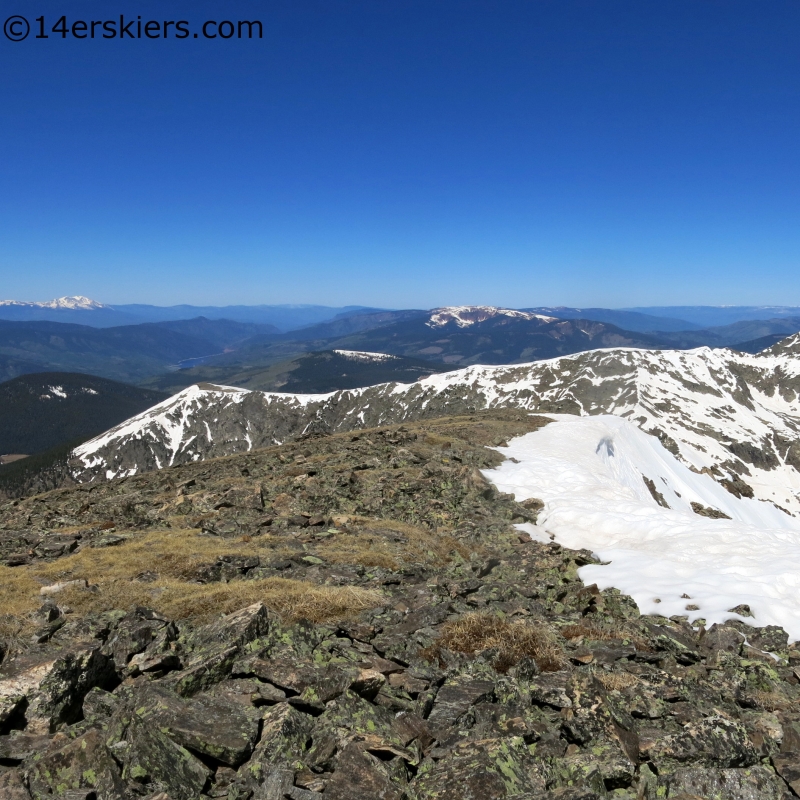 The Bells and Pyramid even looked OK from this distance: 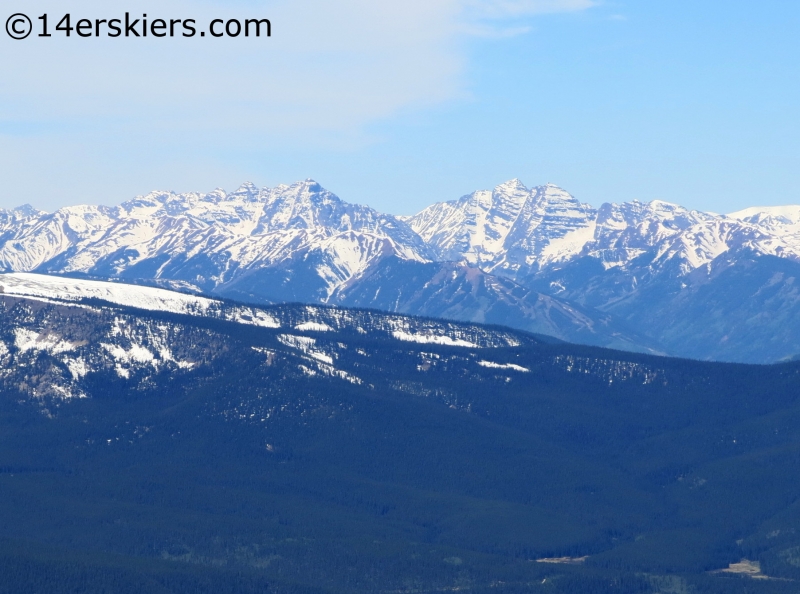 Once we got to the couloir, it didn’t look quite a bad as it looked from a distance. Jay dropped in: 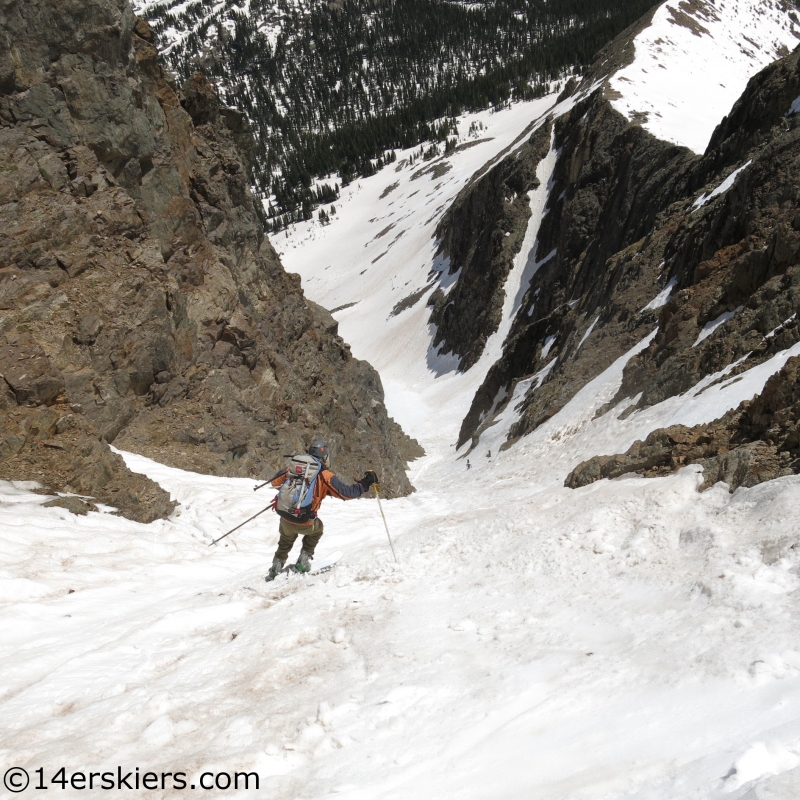 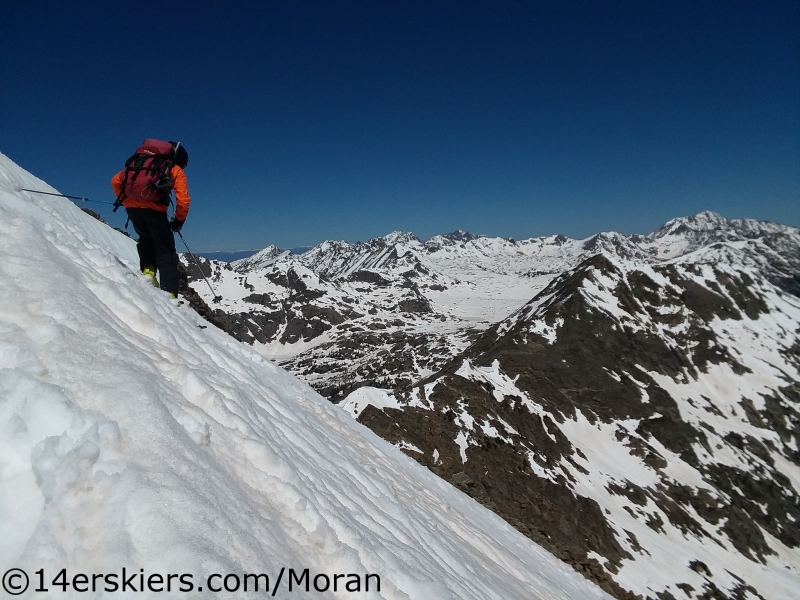 Can you spot the skiers, as well as 2 snowboarders climbing the line: 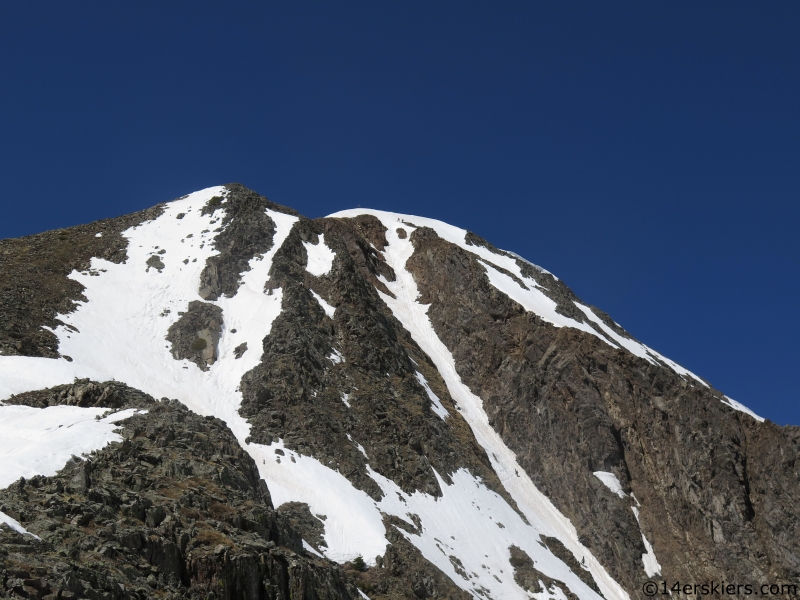 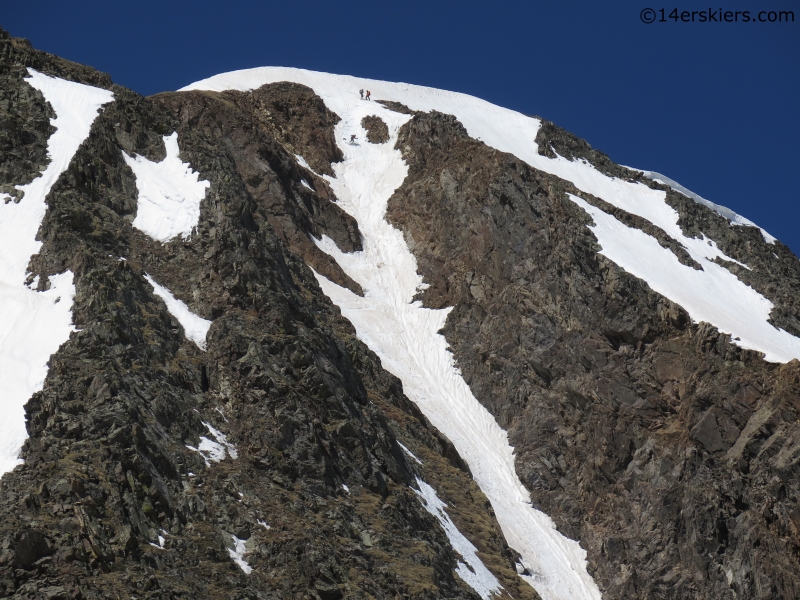 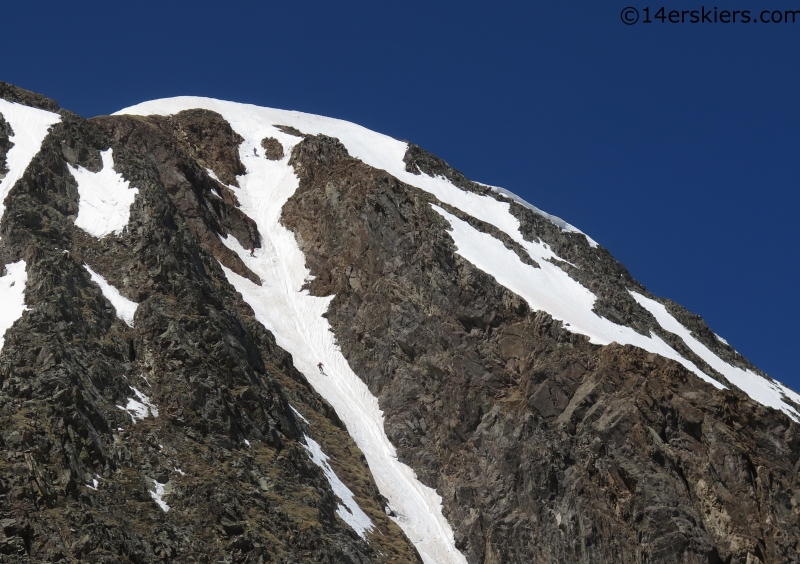 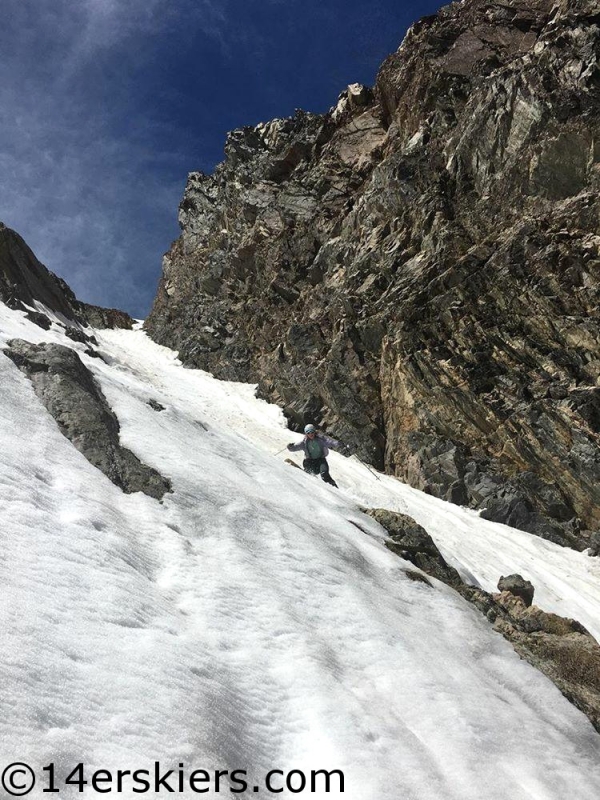 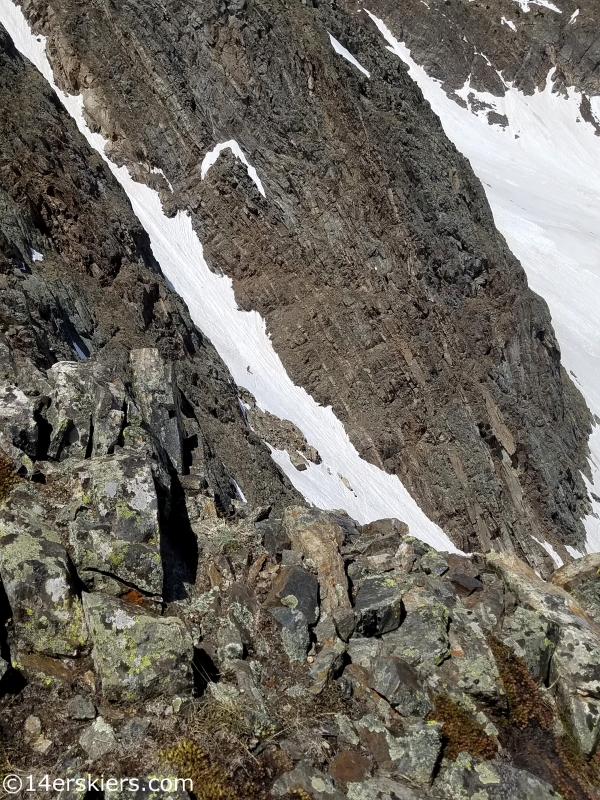 Conditions in the couloir weren’t great, but I’ve skied worse. It wasn’t just the runnnel- there were also plenty of rocks embedded in the snow, making me glad we didn’t climb the couloir. The line itself was certainly aesthetic, as was the entire Homestake valley (which has lots of good campsites). Finding this line in good condition is probably a tall order unless you access via snowmobile far earlier in the season, I think we got it in pretty standard conditions. Nevertheless, it’s still a line you’ll want to put on your list. 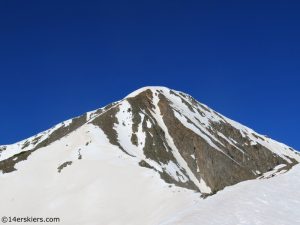 Article Name
Savage Peak | Savage Couloir | 5.26.18
Description
Trip Report from the Savage Couloir on Savage Peak, located in the Sawatch range of Colorado and accessed from the Homestake road between Minturn and Leadville.
Author
Frank Konsella 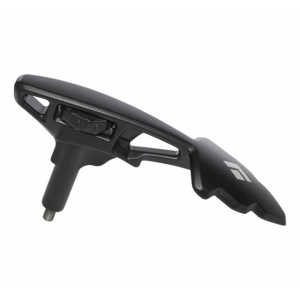