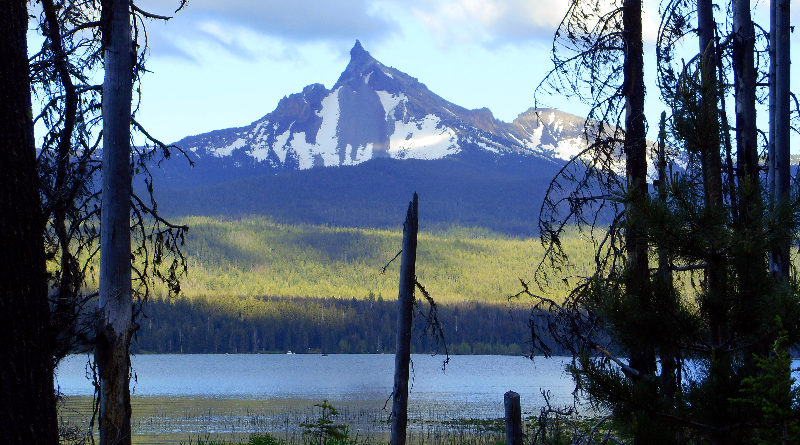 Mount Thielsen is one of the most distinguishable peaks in Oregon. Standing only at 9,182 feet, this volcanic peak is certainly not the tallest of the volcanoes. But, it’s craggy summit beckons climbers as much as it attracts lightning. It is said that Mount Thielsen is struck by lightning more than any other peak in the Cascades. Hence, it has become known as the “lightning rod of the Cascades”. And we just had to go there 🙂 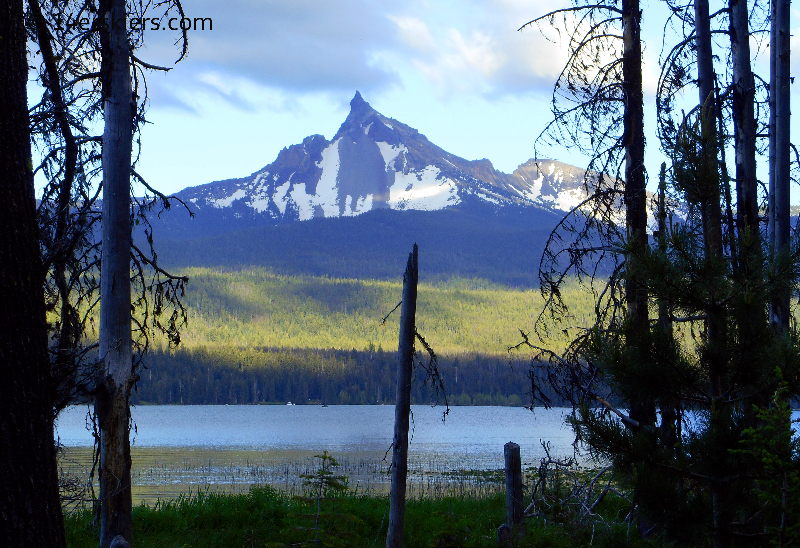 After South Sister, Pam and I were still trying to dodge the somewhat dicey weather to the north by heading south…. while staying north enough to have good skiing conditions. Thielsen caught our eye, being one of the taller peaks in the southern part of Oregon. Still, we were not impressed with the snow coverage as we caught a first glimpse of the northwest face. 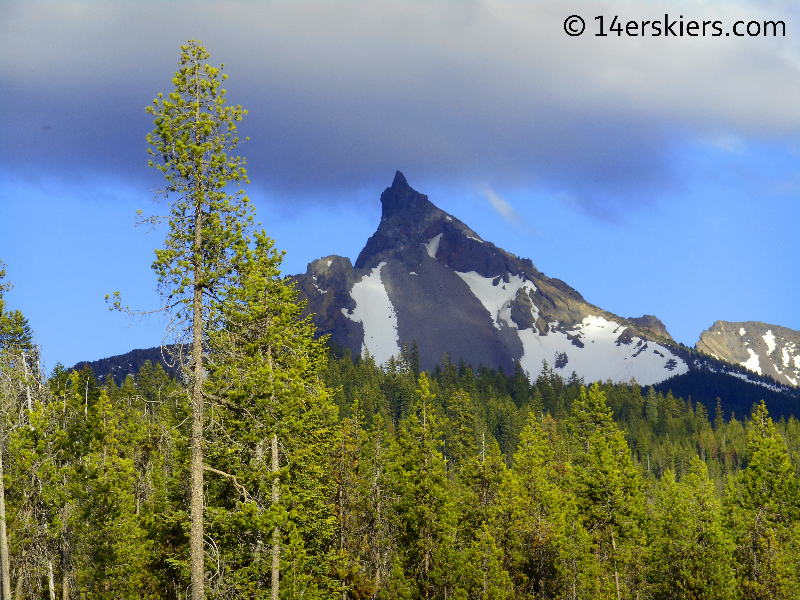 Bailey, standing across the way at 8363 feet, seemed much more appealing. 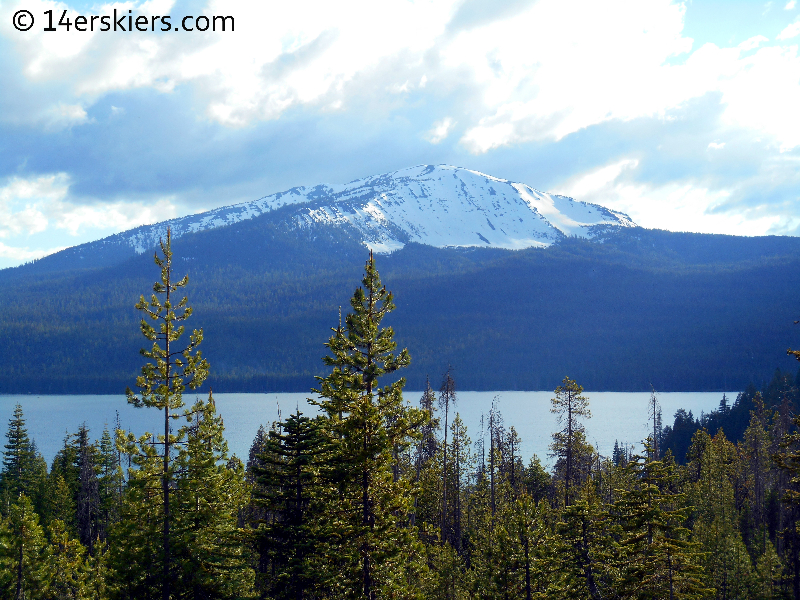 But, something about Thielsen lured us. We decided to go for it anyway, knowing that the snow-coverage would be sub-par. We camped that night at Diamond Lake and woke at first light to prepare for our day on Thielsen.

We began at the Mount Thielsen trailhead. After two miles (which our guidebook called “a long mile”, we encountered two signs and a fork in the trail. Our guidebook said to turn left onto the Spruce Ridge Trail (not shown in the sign below). 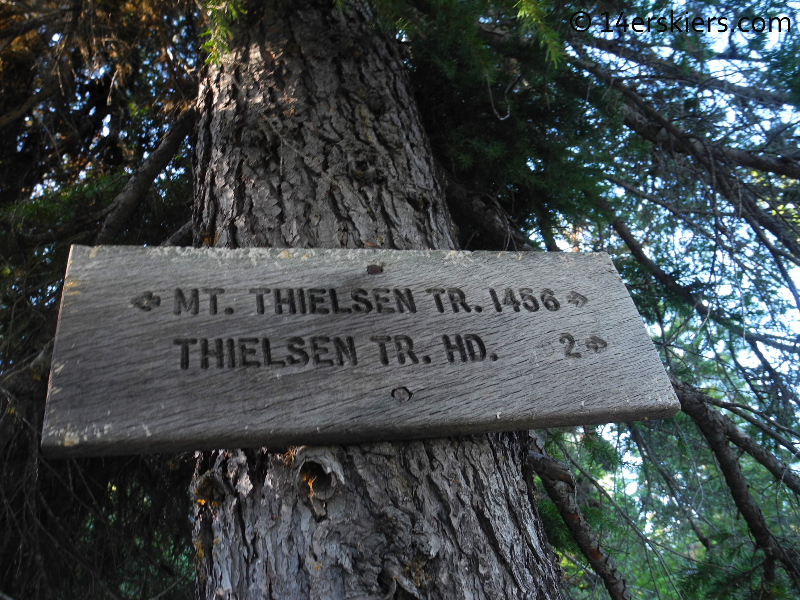 We did so, but quickly felt as though we were going in the wrong direction, though it was difficult to tell in the thick trees of the Pacific Northwest forest with trees three times as tall as what we have in Colorado. Still, we followed the guidebook’s directions, hoping the trail was trying to wrap us around more to the north. But, after about a mile and a half, I busted out the compass and compared it with the topo map, only to confirm that we were indeed going away from, and not toward, Mount Thielsen. We returned to the original intersection and continued following the “Mount Thielsen trail” to a ridgeline where it intersected with the Pacific Crest Trail. 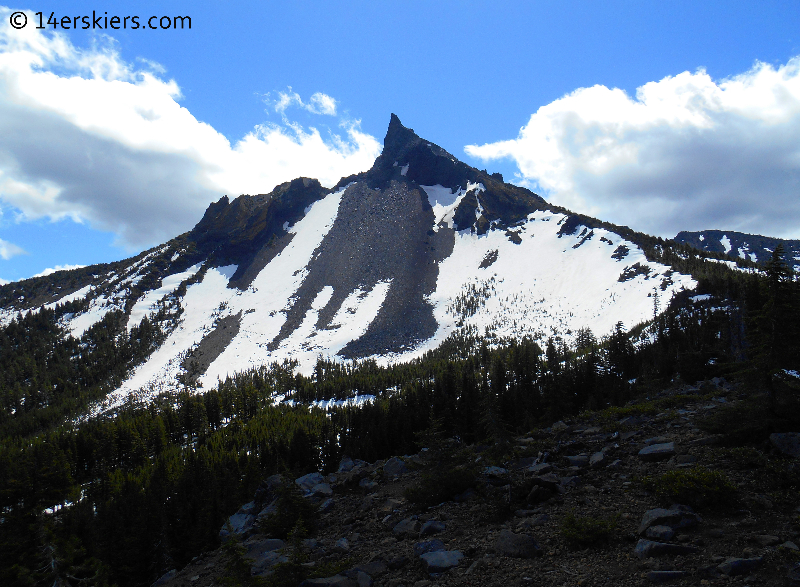 Thielsen is basically not skiable from the summit, especially in a year like this. Because of this, Pam and I decided not to actually summit the peak, but to go for the actual ski line, which was the one to the left of the rocky clearing in the picture above. Until the ridge, we had not encountered enough snow to warrant putting on skis and we were happy to find the northwest bowl full of snow. From the ridge, we skied down into the bowl and worked our way left to the bottom of our line. From there, we began the bootpack up to the top of the snow. 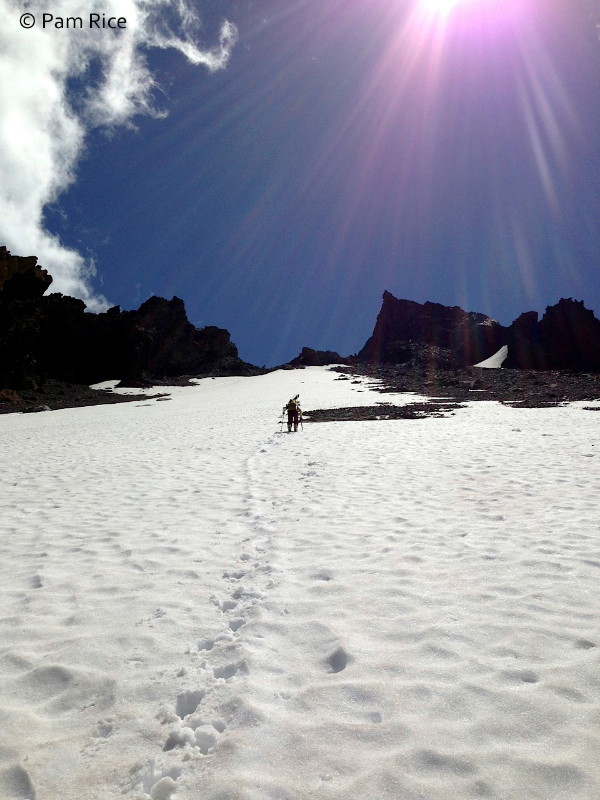 We enjoyed views along the way, including admiring the fields of white on Diamond Peak. 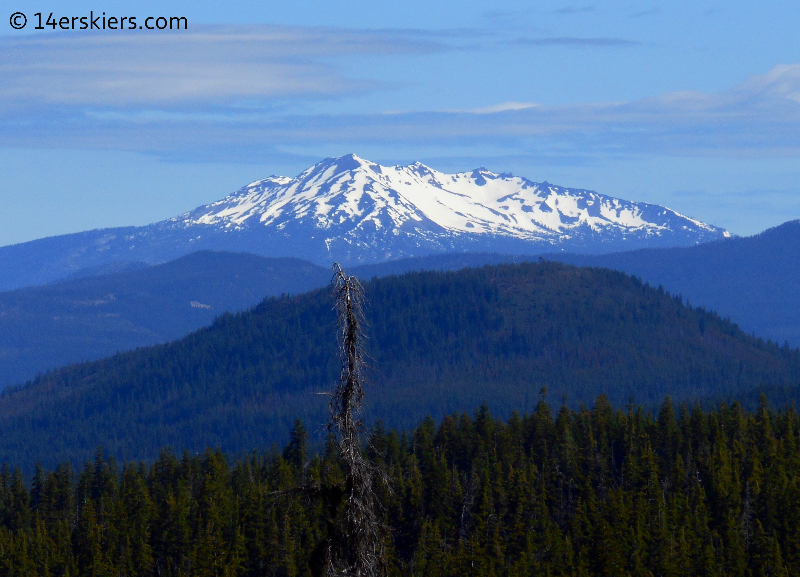 As is true of just about everything it the Pacific Northwest, the climb was a lot longer than it looked. Gradually, I felt myself slowing. My legs simply didn’t want to go. I was bonking hard and decided to take a food break. Meanwhile, Pam took over trail-breaking duties. 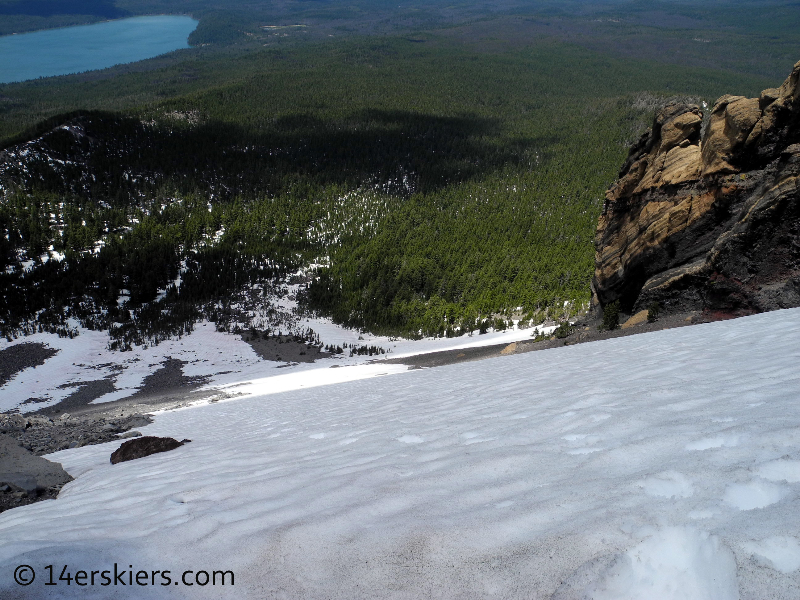 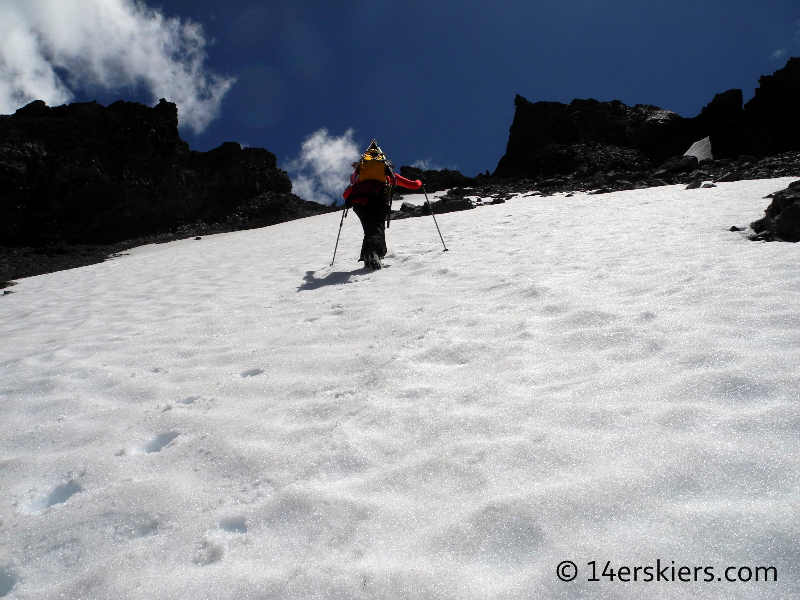 As I ate, I began to notice that Thielsen was chock full of colorful rock. 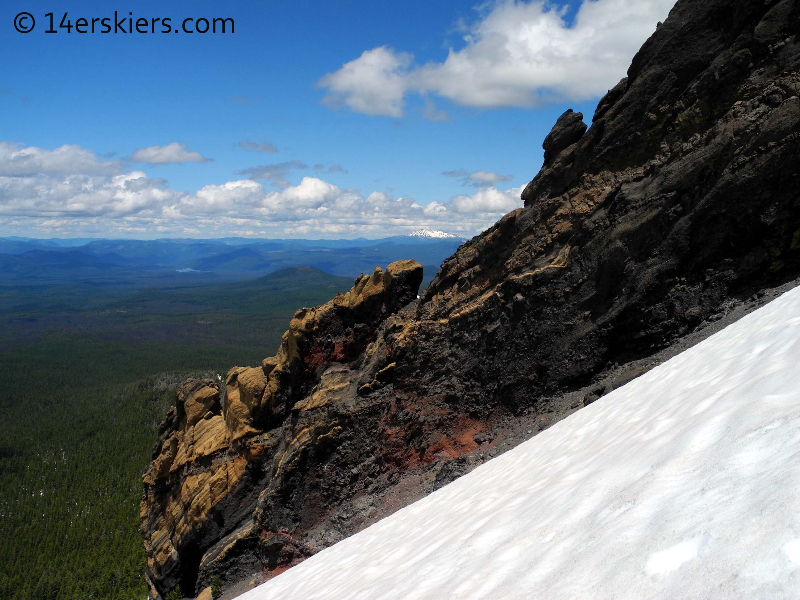 As we reached the top of the snowfield, Pam and I discussed climbing further to a notch just below the summit. But, rotten rock prevented us. 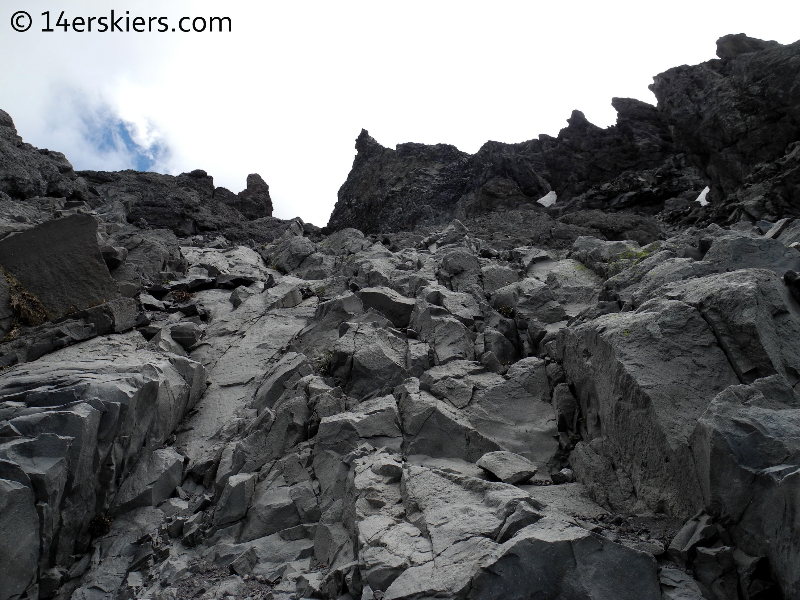 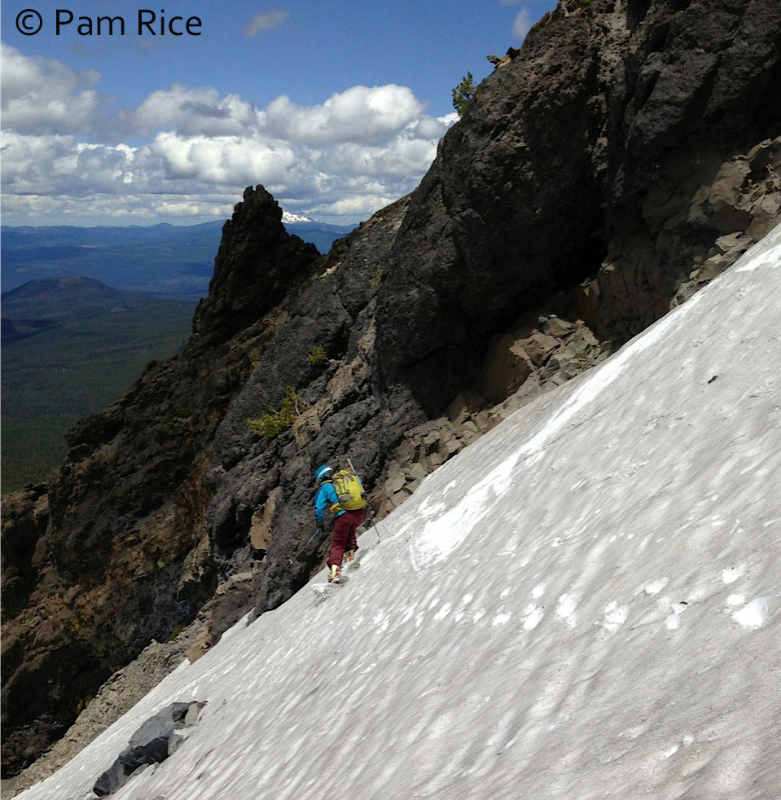 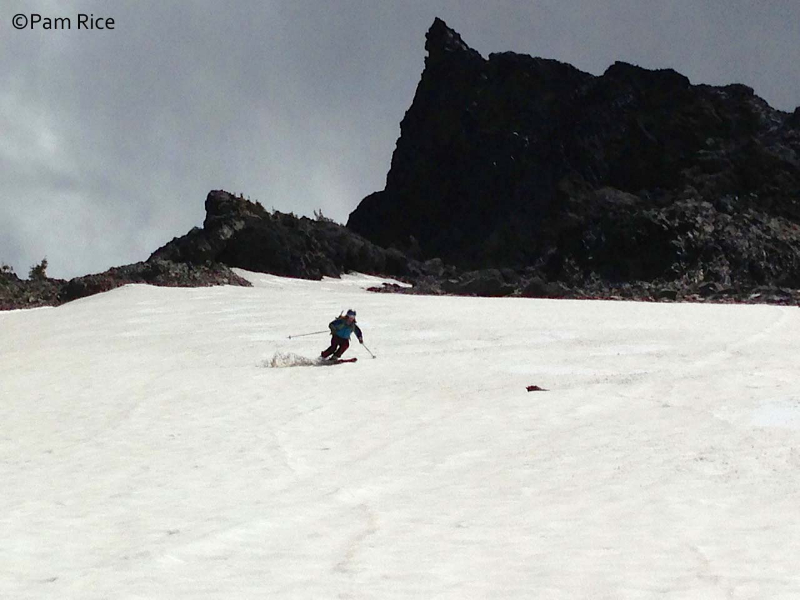 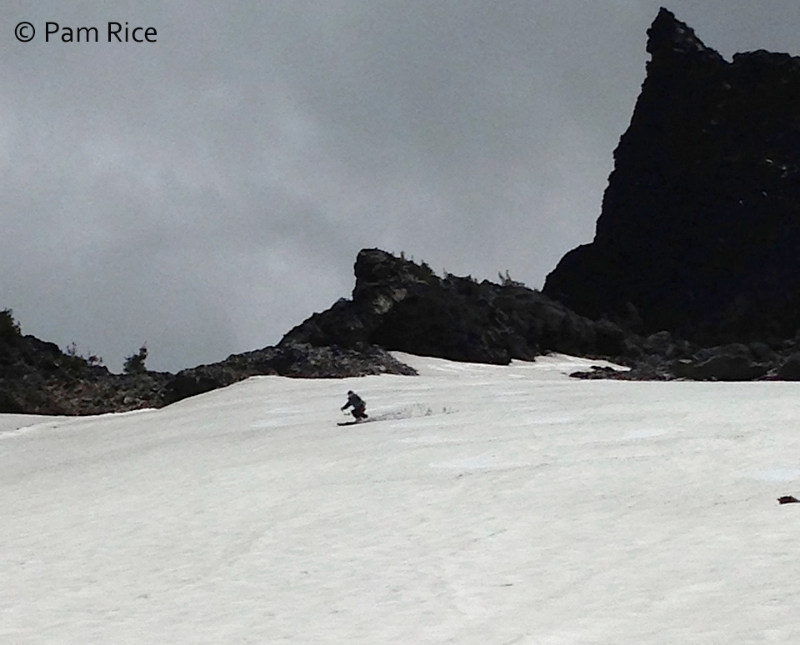 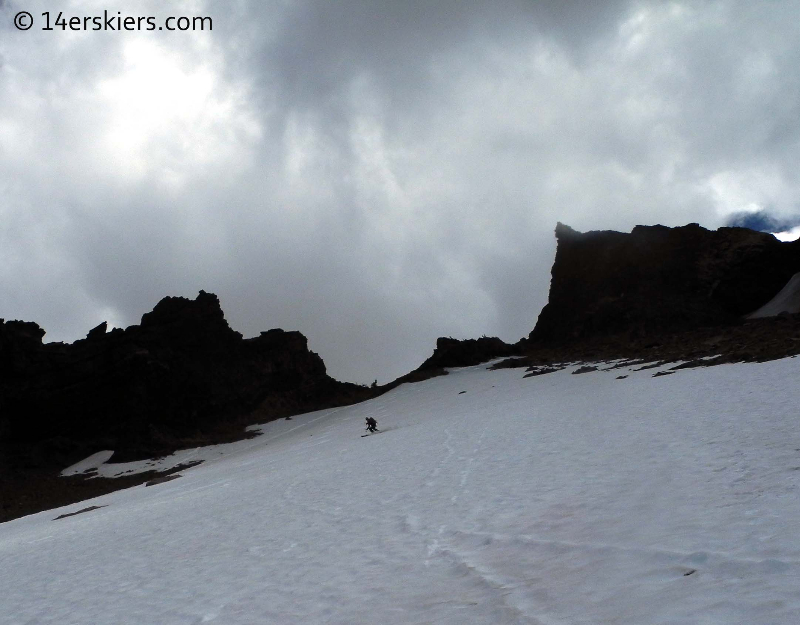 The line was an enjoyable consistently steep pitch all the way to the bottom. Pam. 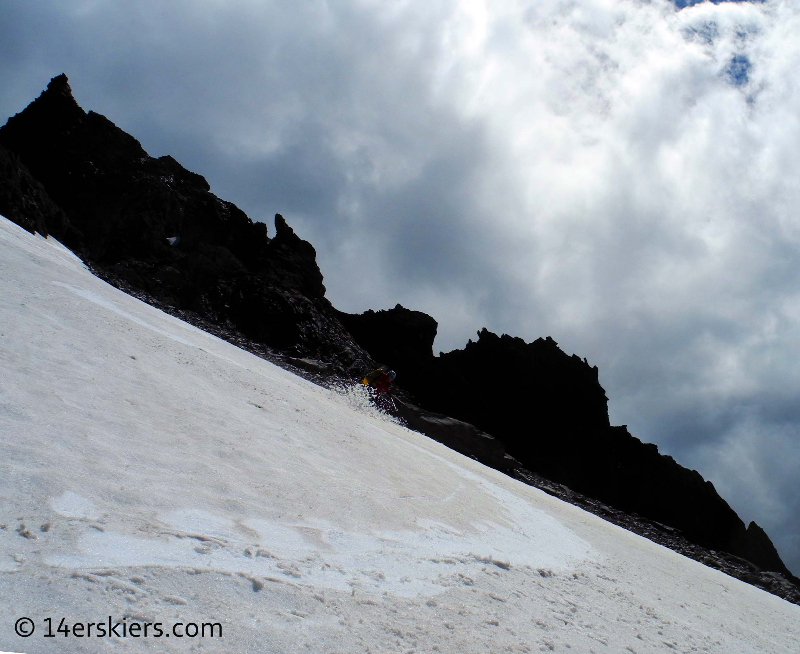 Pam with Diamond Lake and Bailey behind. 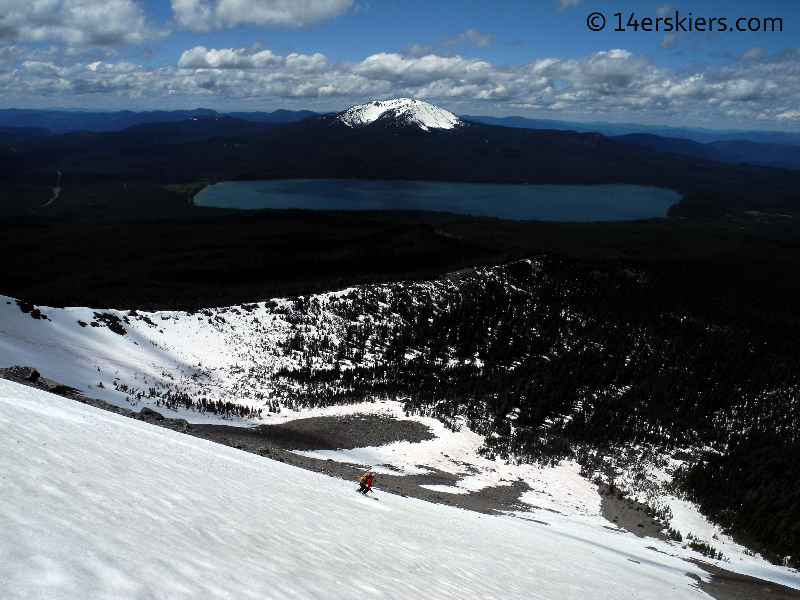 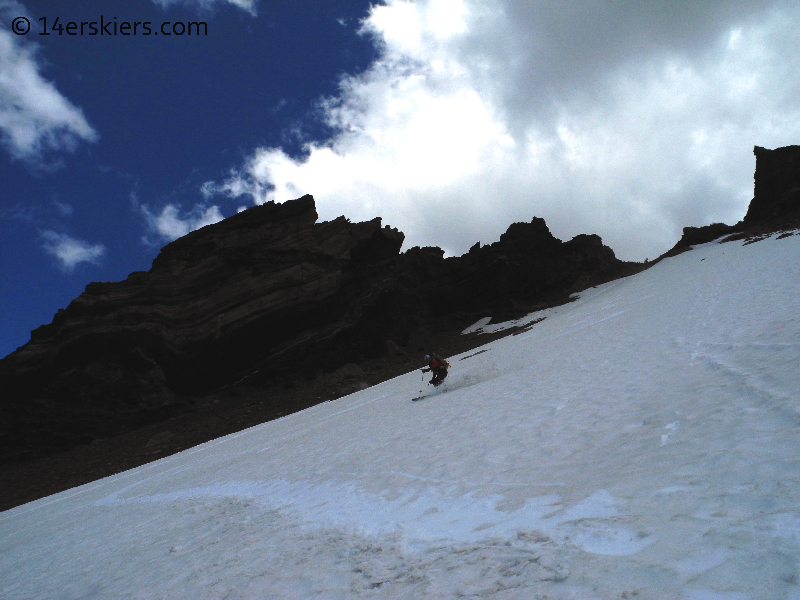 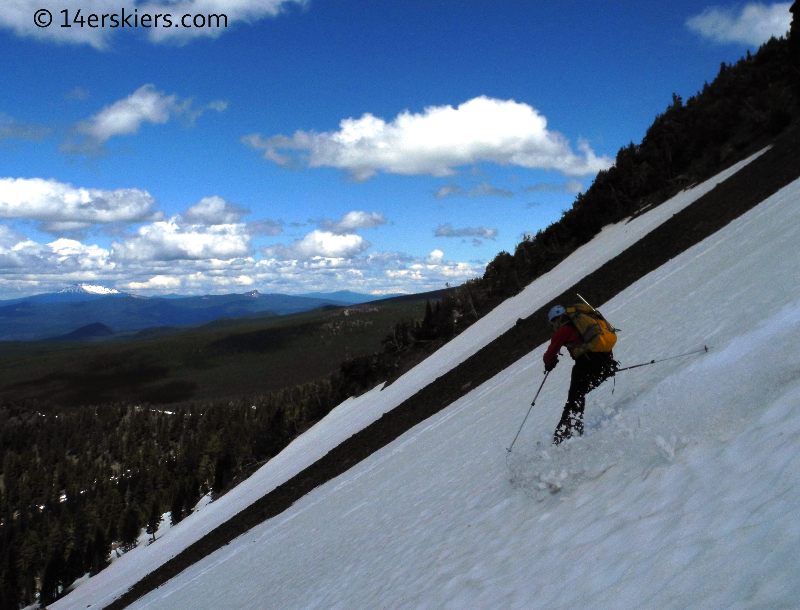 Though a bit on the shorter side in terms of vert, the run was high quality the entire way. At the bottom, happy 🙂 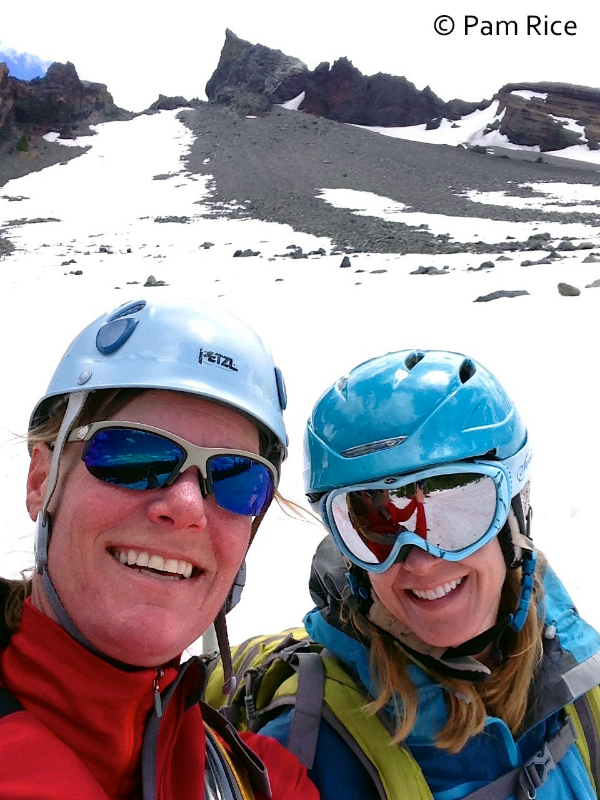 Despite the 3-mile detour at the beginning of our day, we still enjoyed the ski. Despite looking thin, Thielsen actually skied surprisingly well and we had some of the best skiing of our trip on this line.

What was next, we weren’t sure. The front that had been hovering off the northern coast was pushing it’s way south. The weather would be our determinant!