Ahh, springtime. April and May are far and away our favorite ski months here at 14erskiers, but that said, they can also be a frustrating time, especially here in Crested Butte. Eventually, the name of the game becomes access, and while our wintertime access here is quite good, at least with a snowmobile, Crested Butte leaves something to be desired at this time of year. If Gunnison county was aggressive with their plows, the way San Juan counties are aggressive with dirt/4wd roads like Yankee boy, Cinnamon Pass, and Engineer Pass, we’d be set. Instead, Gunnison county lets most of the roads melt out, often behind closed gates. Slate river is a perfect example- a group of trees just past the winter closure hold snow, making it impossible to drive unless it gets plowed, which it never does. Yet right after the trees, the road goes out into the open and is frequently dry, making all the great peaks one could access from the road very difficult to get to, whether by snowmobile, bike, hike, or driving. The good news is that Gothic road was recently plowed and should open soon, so we should have better access in the near future, assuming the overnight temperatures start cooperating.

I wonder what would happen if Gunnison County were to open Schofield Pass early- say around the same time as Ouray County opens Yankee Boy- in April. Would skiers and climbers flock to the area the way they do in the San Juans? I’d like to think so, but then again Crested Butte is a bike town with precious little affinity for skiing, so an open Schofield Pass would probably only see bike tracks rather than ski tracks.

In any case, Pete Sowar, Brittany, and I hoped that last week’s snow would make Slate River accessible one last time, so that’s where we headed. Alas, we were wrong and we decided not to subject our snowmobiles to what appeared to be miles of dirt road. We quickly came up with a plan B and headed towards the Kebler Pass trailhead for a quick tour on the North bowl of Peeler. It wasn’t quite the steep skiing that we were hoping to do, but it’s still a great tour in a spectacular basin. Access to our first run wasn’t exactly what anyone would call difficult, as you can see based off where we parked the sleds: 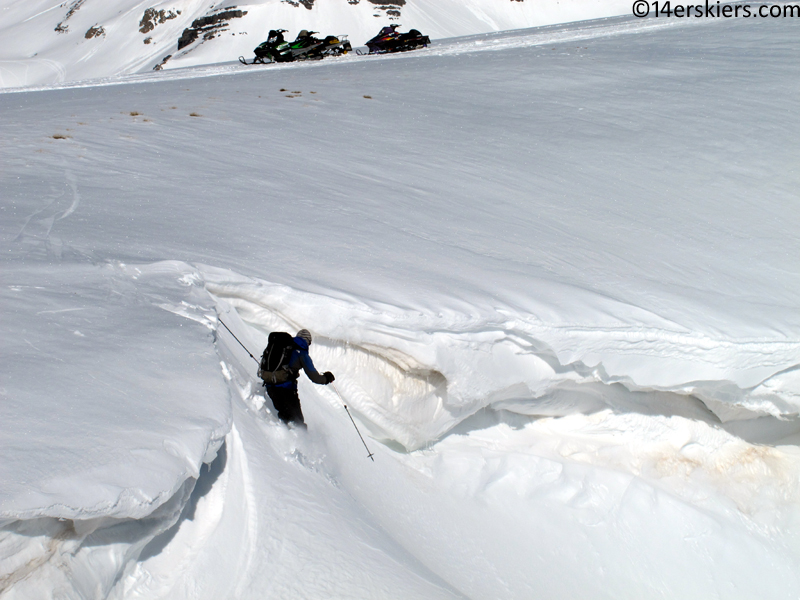 I needed to get a better look at my landing: 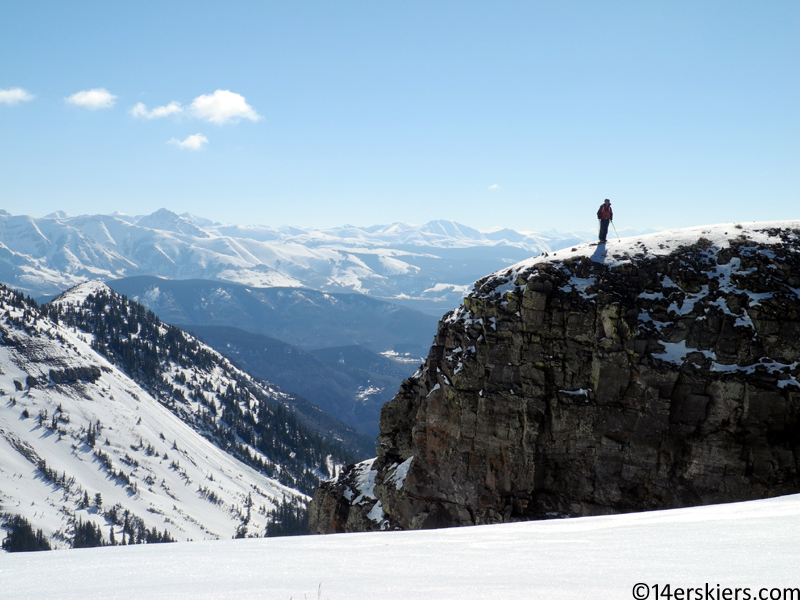 It was a big cliff, but I totally stuck it, you can see my bombhole at the end of the arrow: 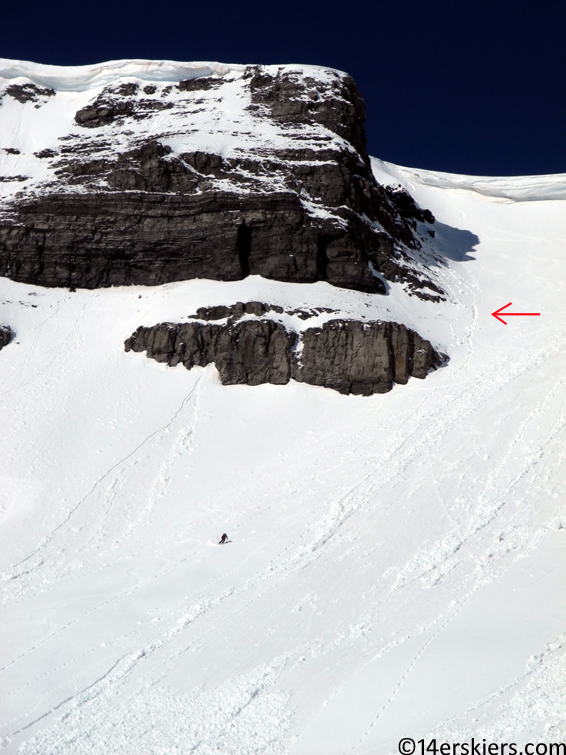 OK, I’m not sure why I thought that was funny, but thanks for the indulgence. I did get a nice angle from the cliff of Brittany: 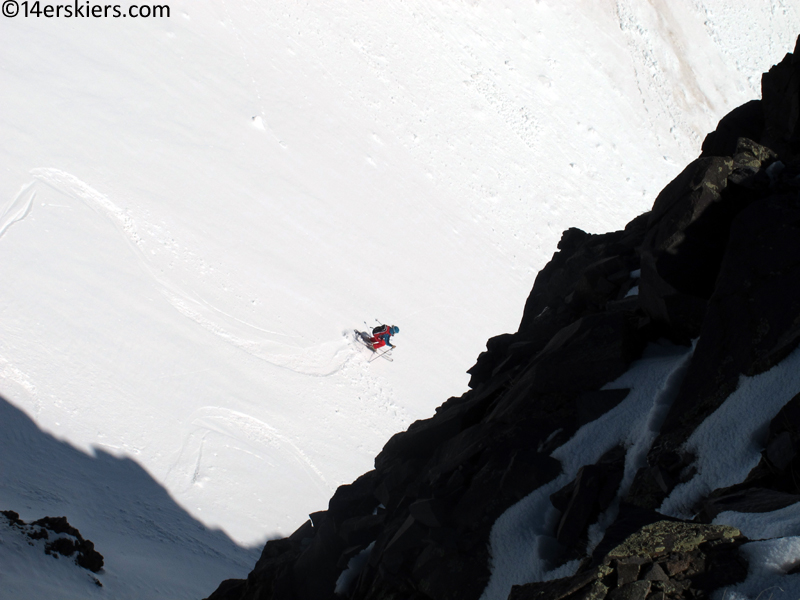 Peeler basin was the sight of a number of massive slides over the past couple of months, and we could see a number of them, both new and old. It’s actually pretty typical for this area for cornice failures to initiate large slides. 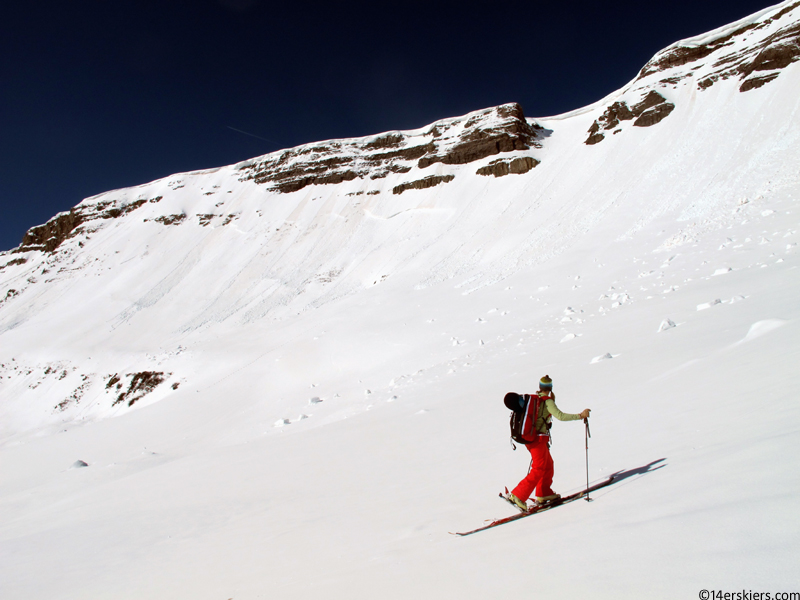 We quickly found ourselves on the north facing terrain of Peeler itself. It looks smaller than it is- it’s actually well over 2,000′ down to the valley. Pete: 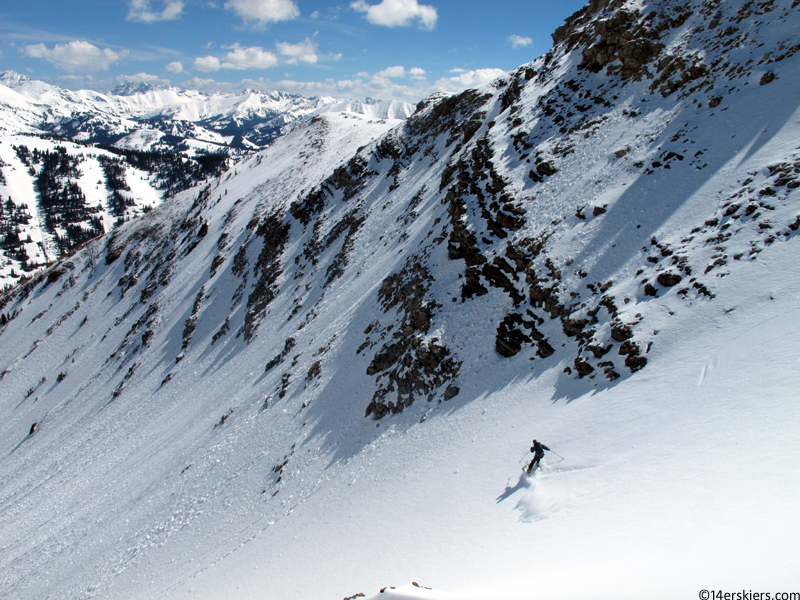 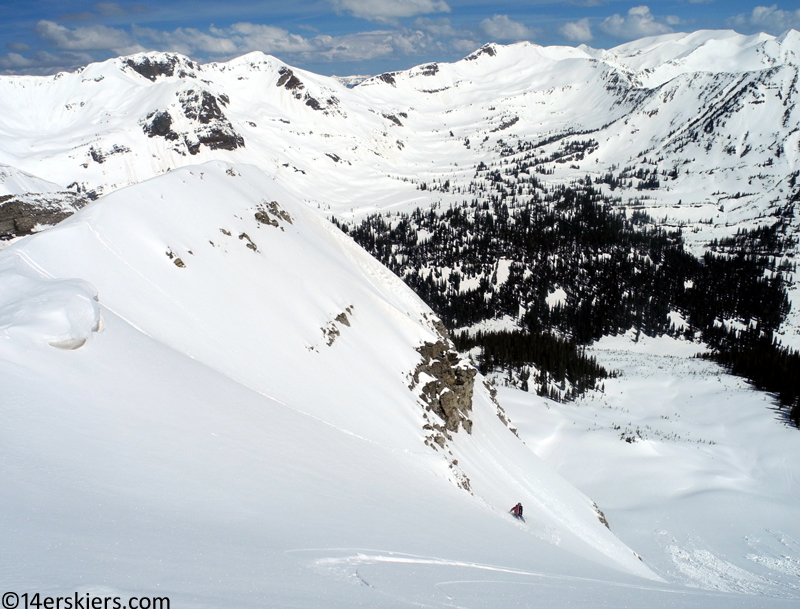 We had some powder up top, but also some corn in varying degrees of readiness. Brittany: 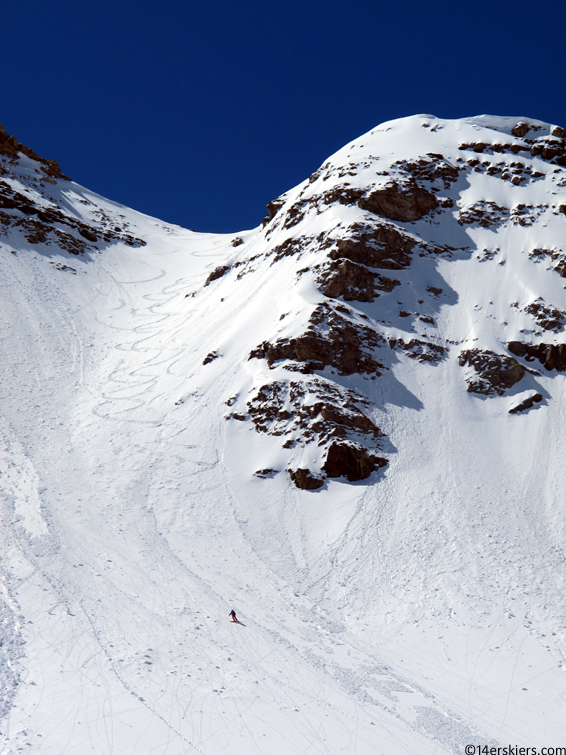 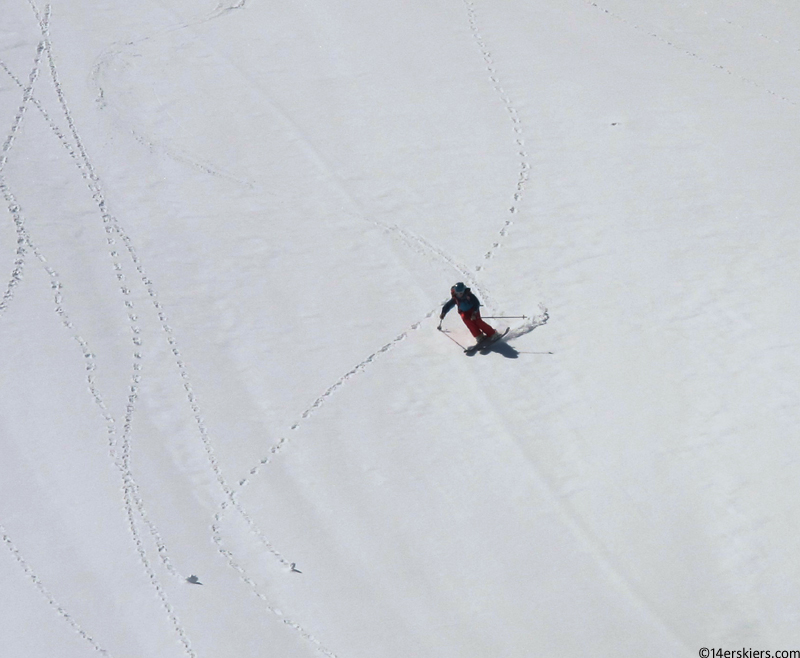 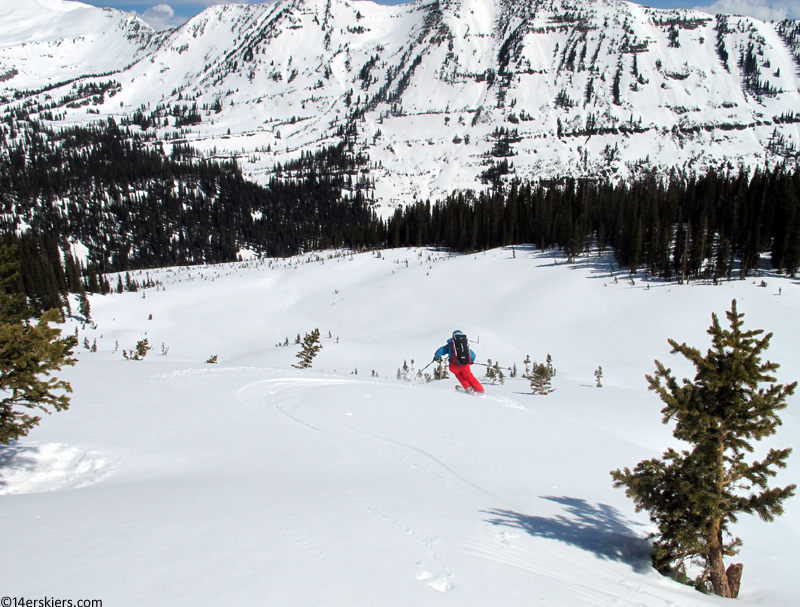 The view of Purple Peak from here is pretty spectacular and gives a good view of the S- and C- couloirs: 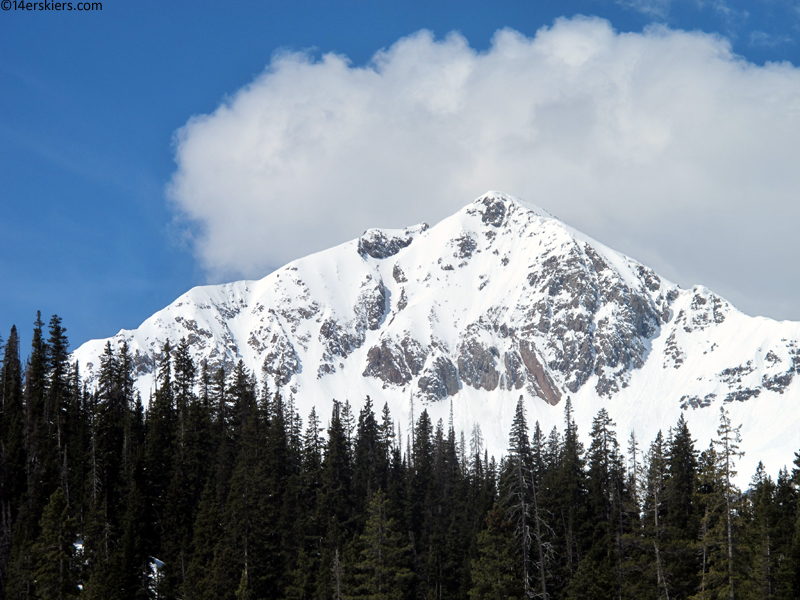 Things were already warming up and we had to carefully pick our way back up to Scarp’s ridge. From there, a bit more skinning and skiing led us back to our sleds. Brittany approves: 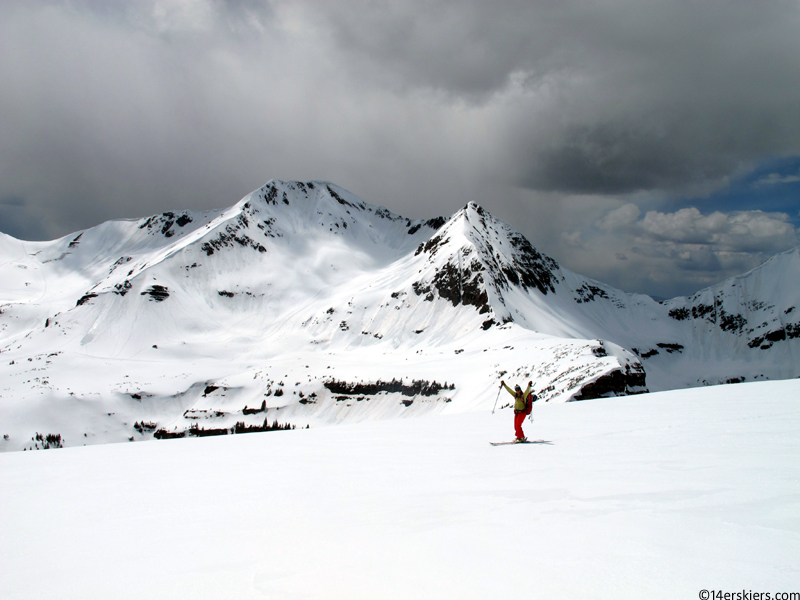 It wasn’t exactly what we had in mind, but it worked out well and neither Brittany nor I had actually skied that part of Peeler, so we definitely made some lemonade out of the lemons we were given down at the Slate River trailhead.

We’re glad to have a new affiliate at 14erskiers, Bent Gate, from my hometown of Golden, CO. Check them out: