Brittany’s Intro: It was a mental battle more than it was a physical battle to ski the T3 chute. How do you prepare yourself for the hardest line you will have skied so far that year in the wake of so much tragedy? Five deaths, from an avalanche, the day before we are going to ski T3. The largest skier/snowboard triggered tragedy in Colorado. No, we didn’t know any of them. But, it doesn’t matter. Five deaths. From skiing and snowboarding in the backcountry. Five people who knew their stuff about backcountry skiing. And yet, here we were, going to ski a line that we had all been eying for years.

My sleep was restless and I awoke in a cold sweat after dreams of avalanches. The whole slope slid out on me in my dream. It was all gone. The snow, the trees, the rocks, we were all one. I tried to channel my thoughts in a more positive direction. I thought of puppies and kitties, the ocean and sailing…. I thought of anything that I could to take my mind off of skiing. But, my life revolves around skiing. And all thoughts eventually spiraled back to the one thing I was trying to get my brain to avoid. I went through pictures of the T3 line in my head. I thought about us skiing it – and skiing it safely. I knew in my heart that the line was a good choice for us to ski that day. And I knew I had to follow that feeling. Finally, my brain agreed with my heart. The battle was over and my alarm buzzed me awake. It was time to ski this thing. 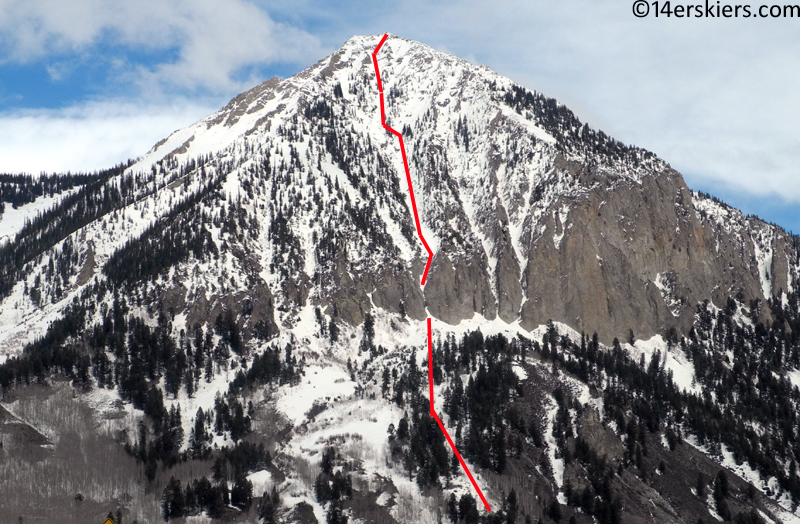 Crested Butte towers over the town of the same name and will draw the eyes of any skier in the same way a flame draws a moth. All winter, every winter, I gaze up at the face and wonder if it’s ready for me to lay some turns on it. But it’s a tough one. While the summit is easy to reach from the other side, it’s part of the ski area- one with a closed boundary. Meanwhile it’s a windward face in an area that receives mediocre snowfall, at a low elevation, with a lot of dark rock that heats up in the afternoon sun. Additionally, climbing this side is fairly difficult on questionable rock, though we’ve have made it up a ways on a couple of occasions- most recently in ’09.

Last year, as well as this year, the West face was never really on our radar because, well, it never really snowed. But a funny thing happened about the time the lifts stopped turning- it started snowing. The snow that fell was wet and dense, filling in steep faces instead of just sloughing off like dry CO powder likes to do. The face quickly filled in, and then almost as quickly it had turns on it- and they weren’t ours. Chris Miller and friends beat us to the punch, which was perhaps a little bit of a bummer in some ways, but on the other hand what’s the saying- “Never look a fresh rappel station in the mouth”. Or something like that.

Regardless, we awoke Sunday morning to bluebird skies, a fresh coat of white, and easy access on the now-closed ski area. 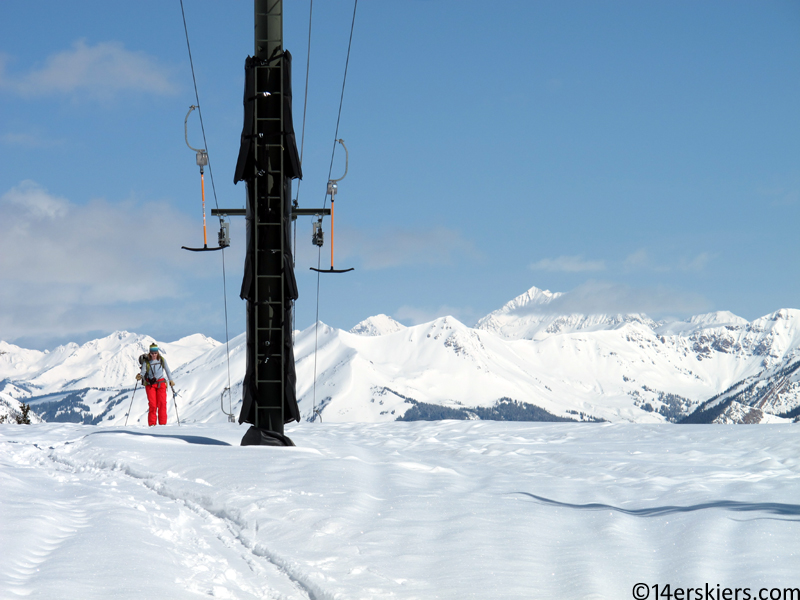 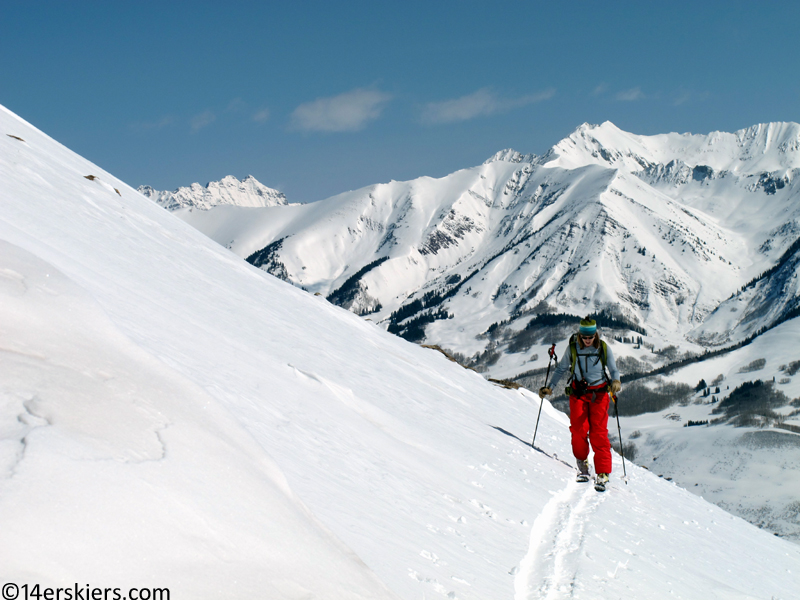 We quickly found ourselves on the summit, gearing up for a descent straight into town roughly 3,250′ below. John Jasper: 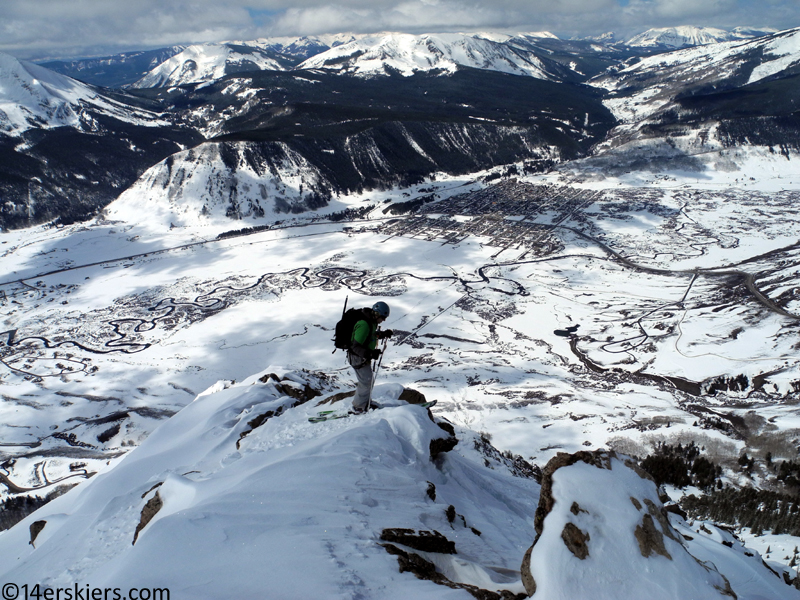 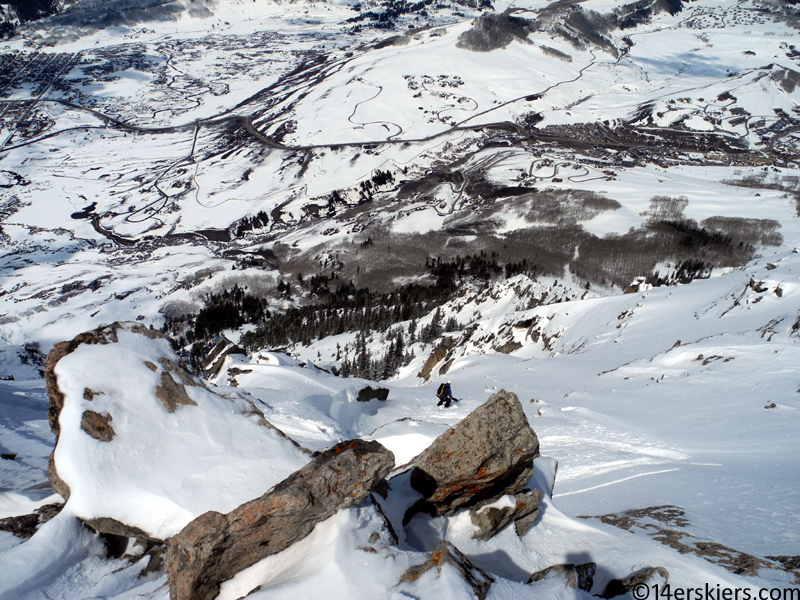 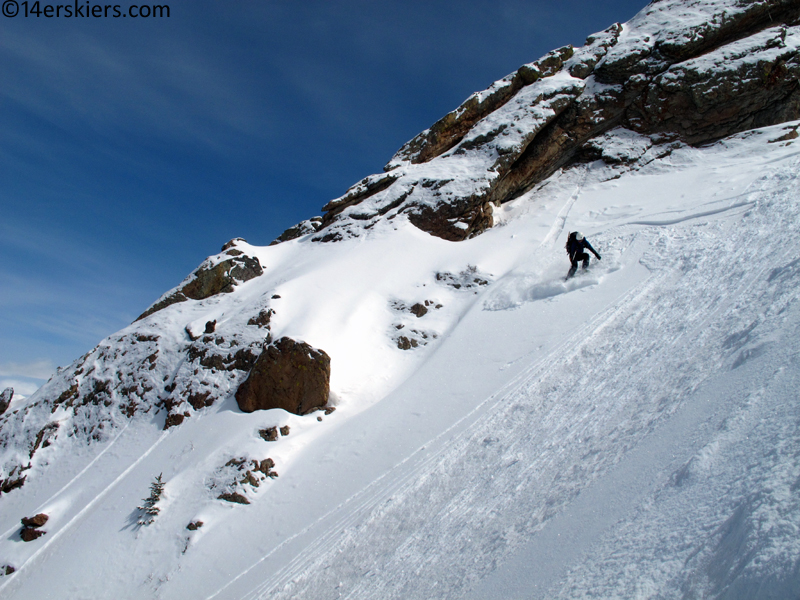 Conditions were variable, but in general the 2-3″ of new snow made for some pretty good skiing. Brittany makes her way down with Jasper negotiating some rocks above. 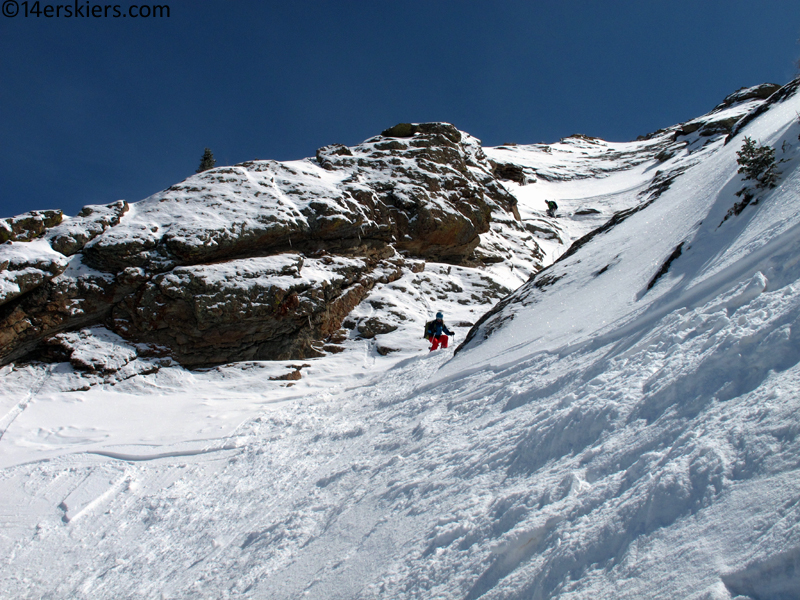 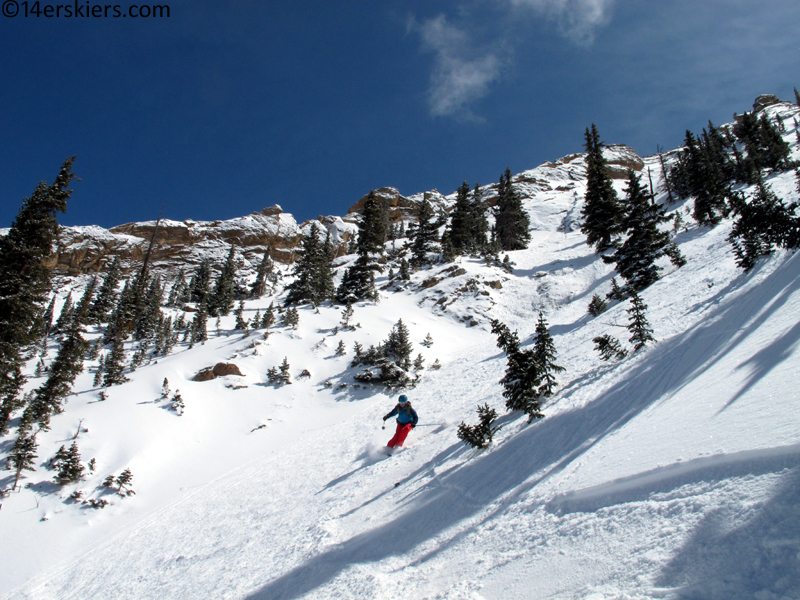 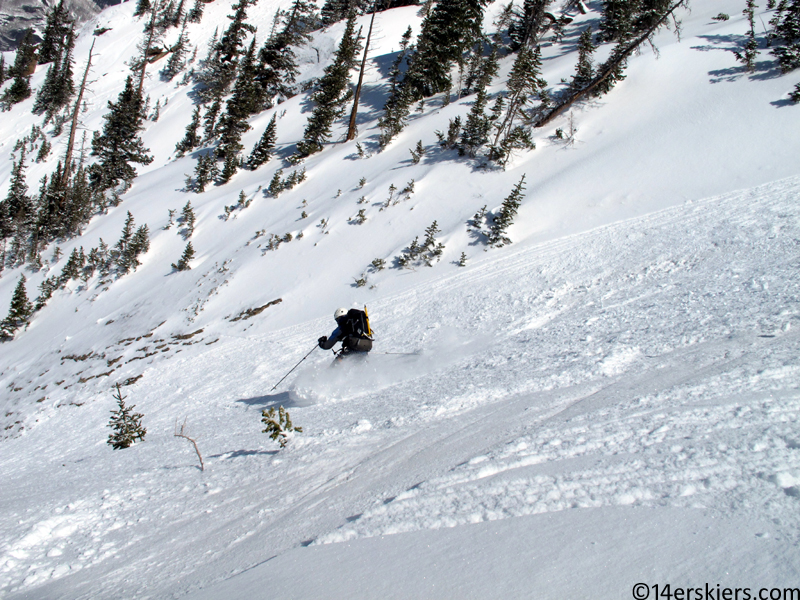 Jasper, with Whetstone behind: 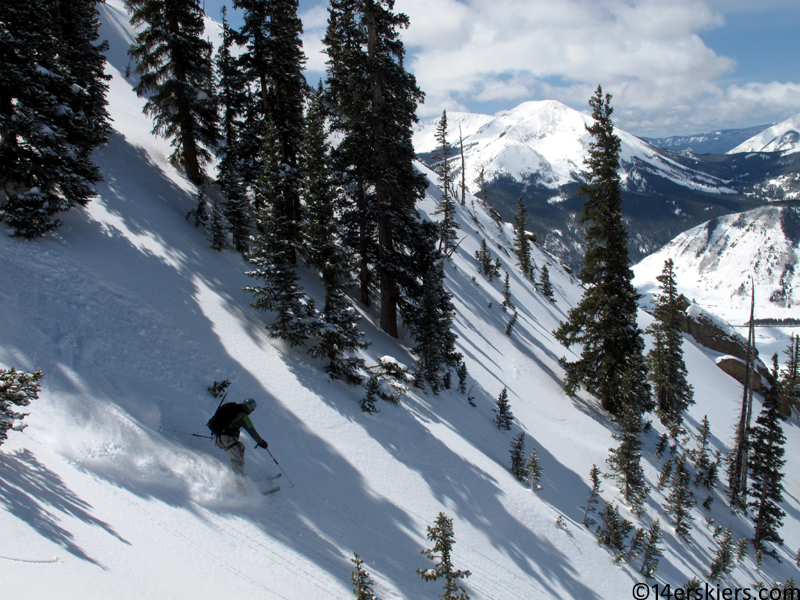 A couple of me: 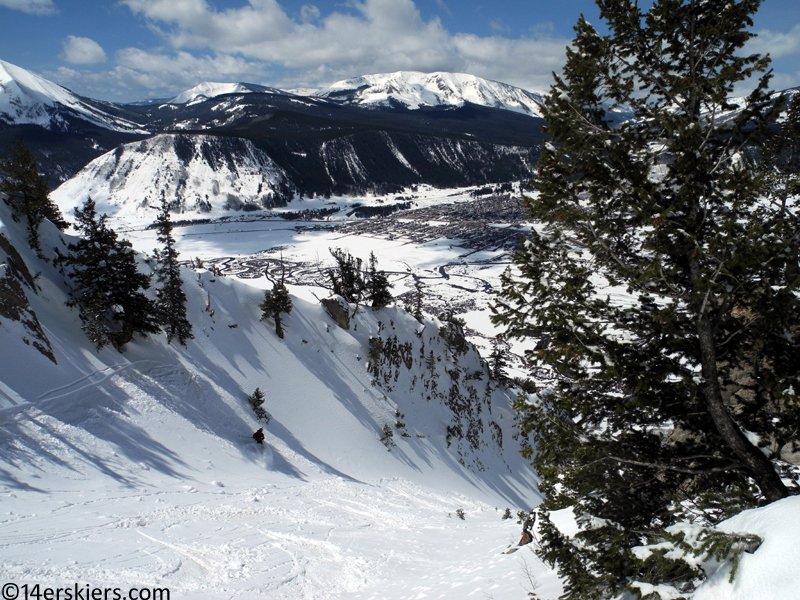 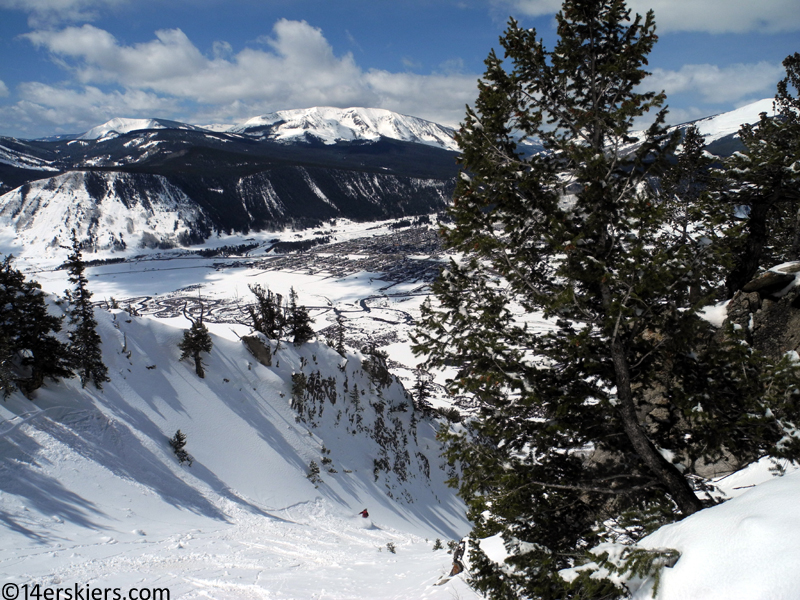 Perhaps this report has too many photos, but it was simply an incredibly aesthetic place on a splitter day, so we had a lot of nice photos. Brittany: 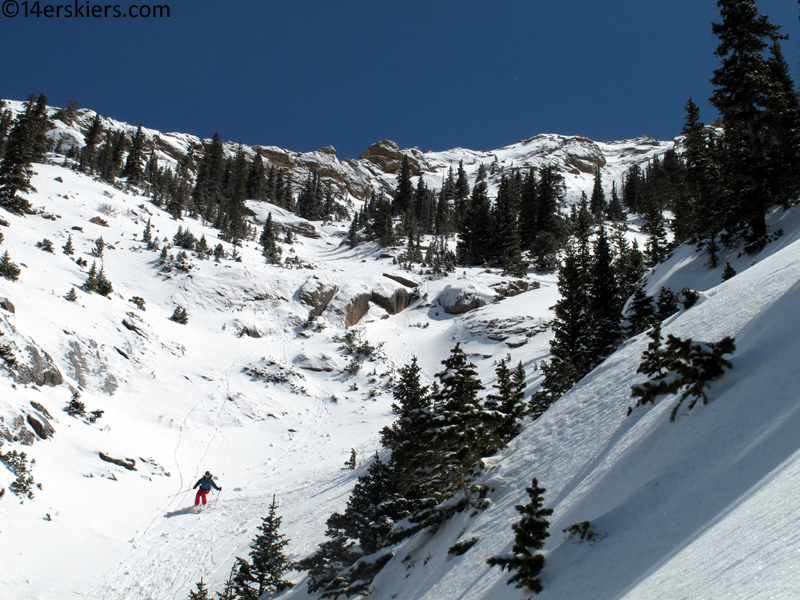 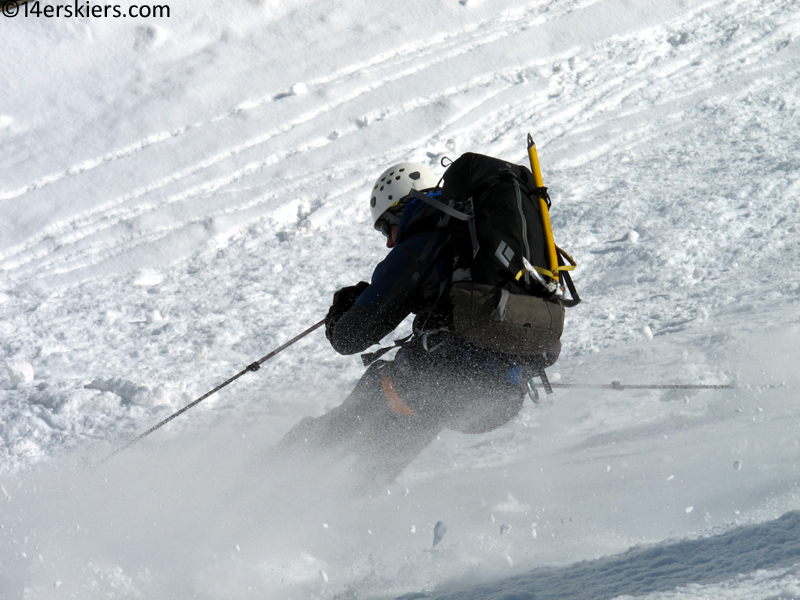 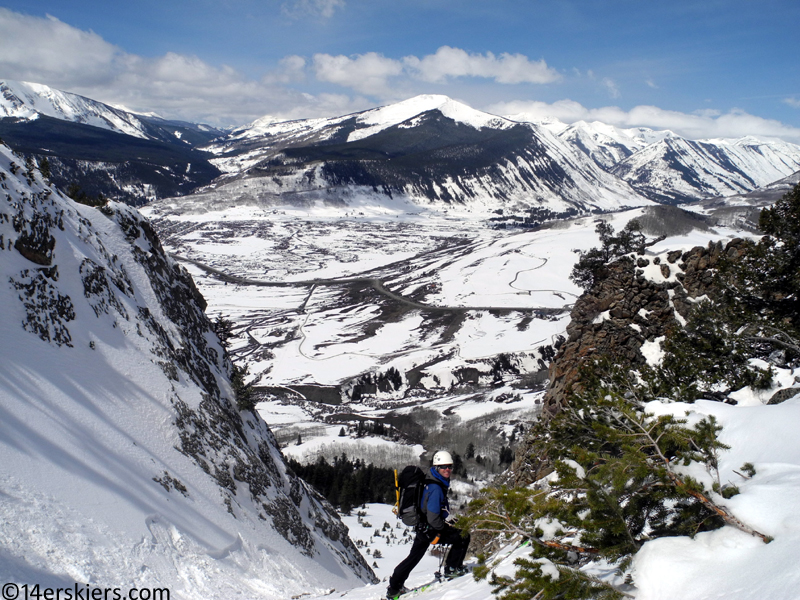 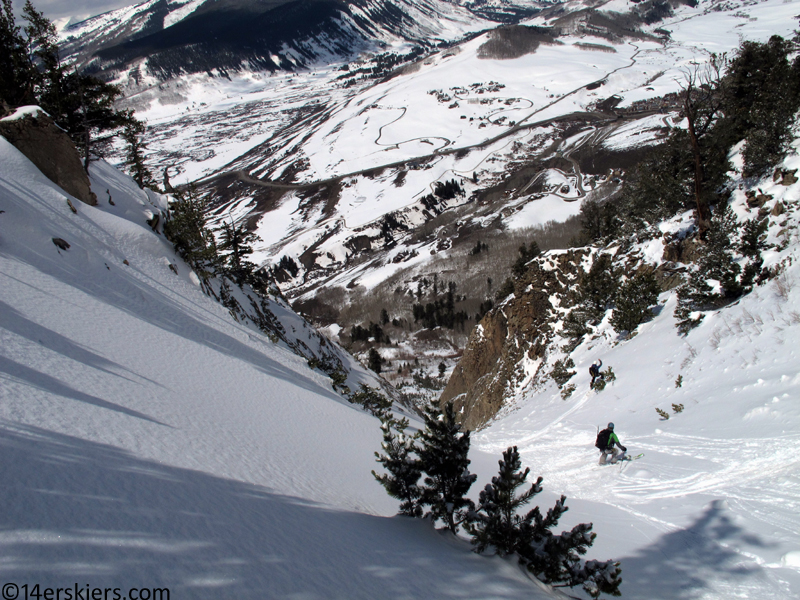 Eventually we hit the slight dogleg and the couloir got a little narrower, a little steeper, and the feeling of exposure slowly started to ramp up. Here, John Jasper makes the final few turns to the rap station: 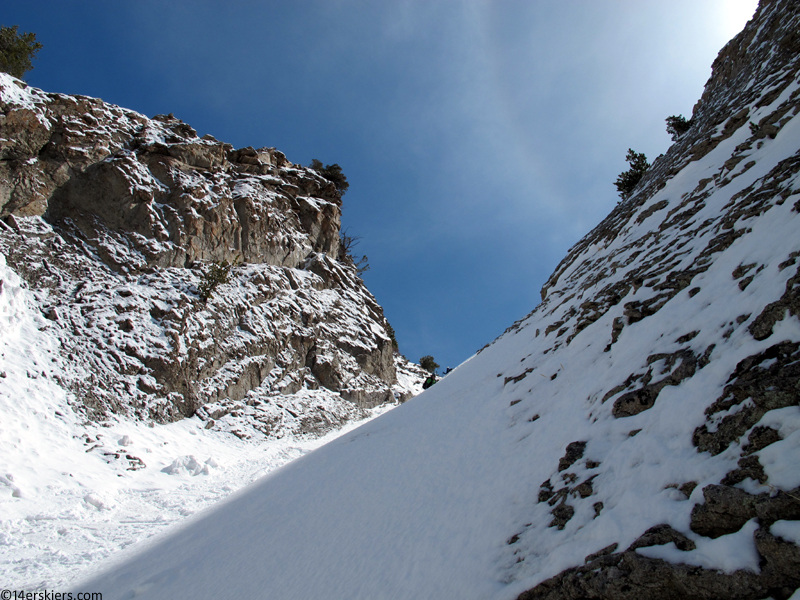 Pete and Jasper, waiting for me to set the ropes up: 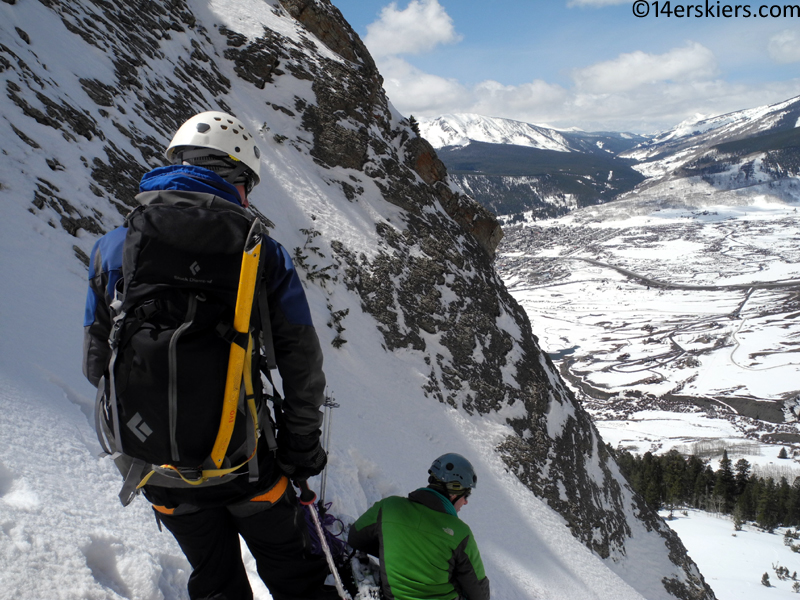 The rappel starts off with steep and narrow snow before the actual cliff. When I’ve stared at this route in the past, I’ve contemplated whether or not it could just be skied. It’s doable- but the stars would really have to align. It’s roughly a 50′ blind straightline with a slight directional change, narrows down to 2-3′ wide, to the 25′ cliff, and there is a giant boulder right where you’d want to shut your speed down. 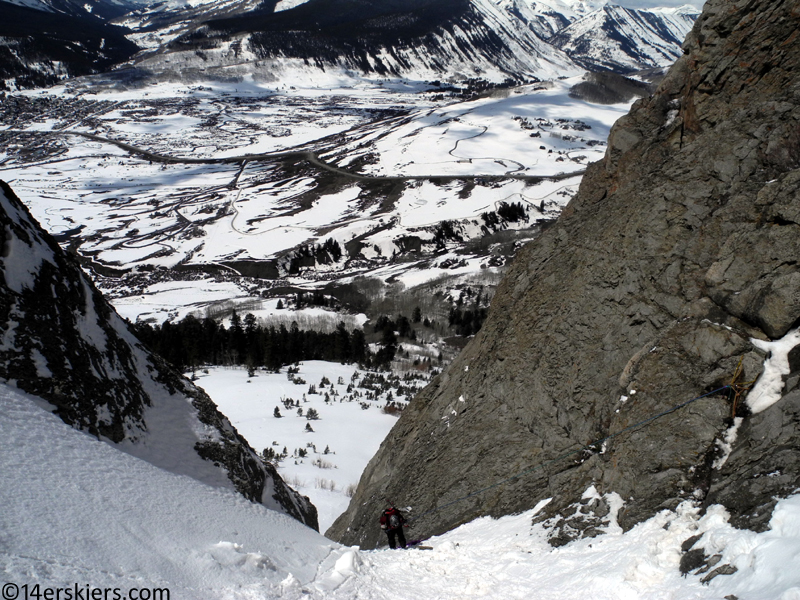 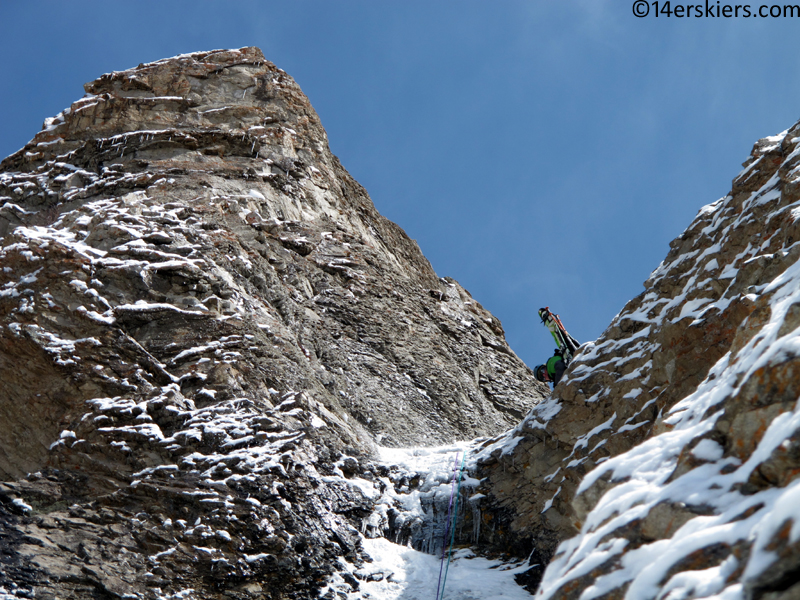 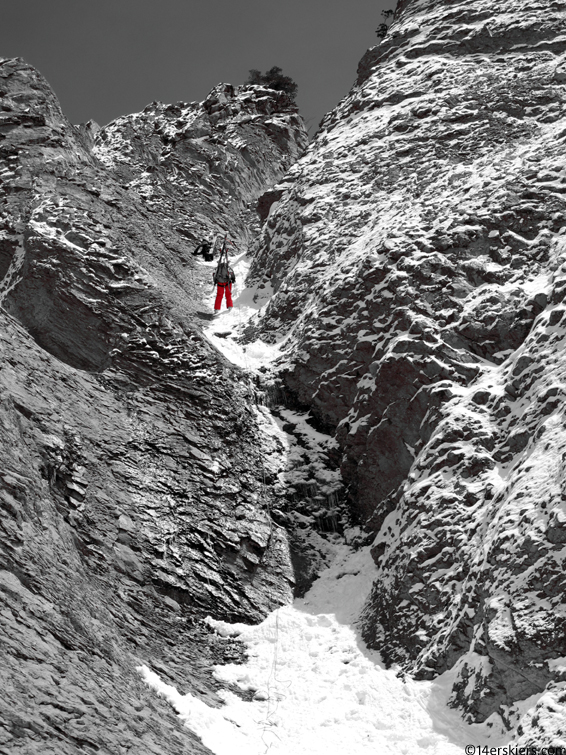 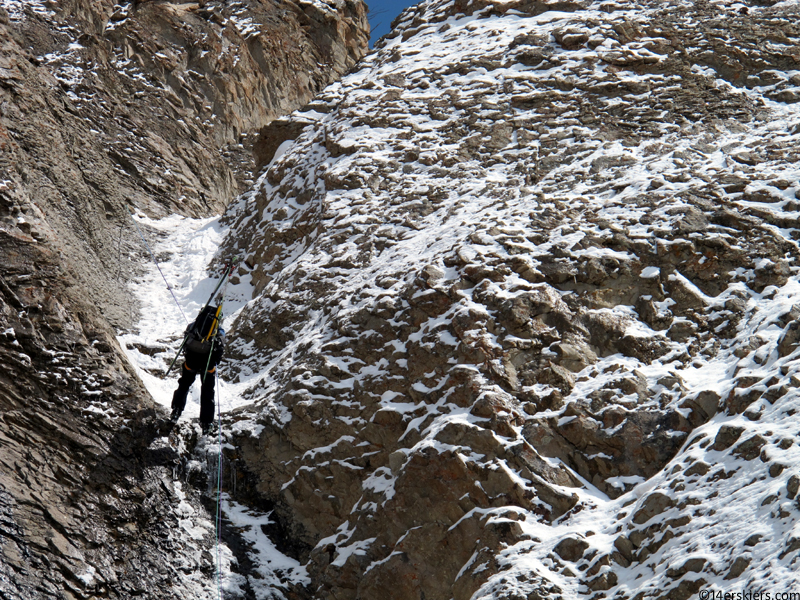 We coiled the ropes and started skiing to town: 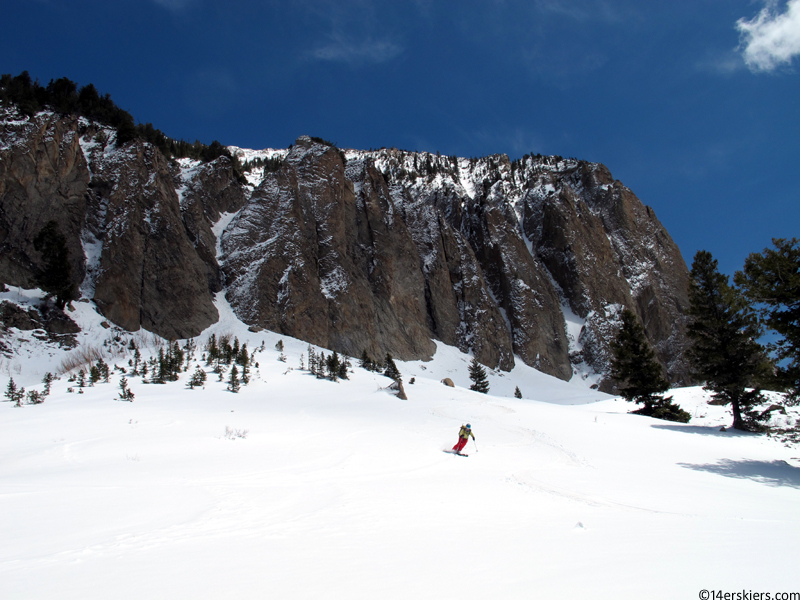 As fate would have it, I answered a phone call from our friend John Wirsing on our way up the mountain. John’s front door is about as perfectly situated as any in town when it comes to the West face, so when he asked what I was up to, I said “look out your front door in an hour or so. And more importantly, if you have any beers you can stick in a snowbank, that would be pretty rad.” It was, indeed, pretty rad: 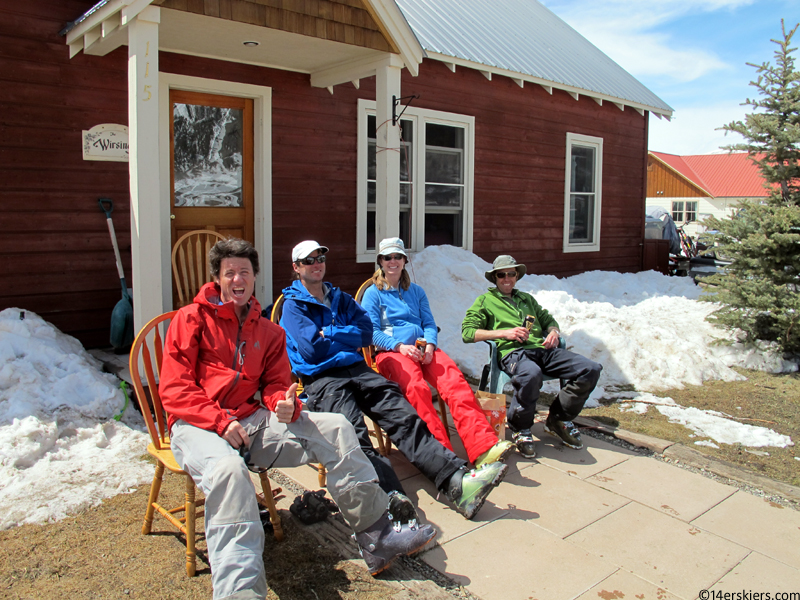