Let’s start this post off on a good note, with Rob’s helmetcam footage from 12/30:

Obviously, it was good and we went straight back to the same spot the following day. My snowmobile was really running poorly and stalled a couple of times so I put it back on the trailer and decided to ride Brittany’s sled, at least down the road to Pittsburg. Unfortunately, I forgot to do something very important as I started off down the road, as I would soon discover. Since I haven’t ridden Brittany’s sled very often, I didn’t realize that it wasn’t running normally, and kept going down the road. Soon enough I started to smell and then see smoke coming out of the hood, so I hit the kill switch and lifted the hood to find… flames! I started scooping snow up and throwing it on the flames, which only made the flames go higher, now 2 feet high. I kept throwing the snow on the snowmobile, wondering if it was time to start running away. Tom was behind me and had accidentally driven off the road, so he didn’t know what was going on, while Rob, Trevor, and Sydney were up ahead, also with no idea of what I was dealing with. Just as I thought the snowmobile might be a goner, the flames went out under the mounds of snow I had piled on it.

As I sat on the snow waiting for Tom to catch up, I tried to figure out what had happened. The fire was centered around the brake rotor, which was odd, I thought. My first thought was that the brake was iced over from the day before, but then I came to the sad realization that it was my fault. My snowmobile doesn’t have a “parking brake” for lack of a better word. Brittany’s sled does. Long story short, I never thought to undo the brake, and drove it like that. The disc got red-hot, burned a hole through the oil reservoir, and started it on fire.

Tom caught up and since there really wasn’t anything to do at that point, we tandemed up to make some turns before dealing with the dead snowmobile. I’m not sure how many times I’ve not enjoyed powder skiing, but skiing after ruining Brittany’s sled is probably the only time. Beautiful day, though:

This might be one of my favorite scenic shots ever: 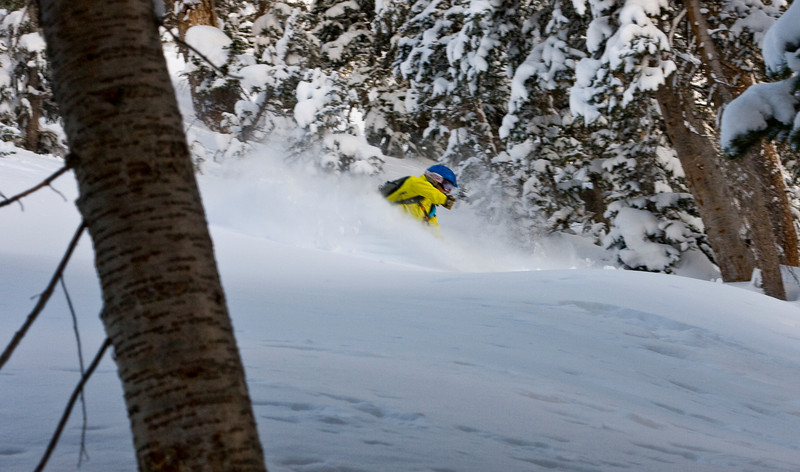 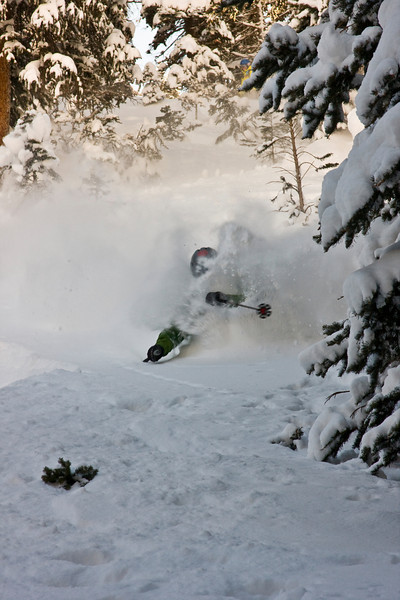 We tried towing the snowmobile out after skiing, but the brakes were welded together, so we couldn’t do it. So Trevor, Tom and I headed out on New Year’s day, armed with a plastic kid’s sled. We stuck that under the track, bungeed it down, and we were out of there before I even had a chance to take a photo. It was amazingly easy, thanks to the help of my friends. I rode the dead snowmobile, and couldn’t see a thing as the spray came up off of Tom’s sled. It was actually pretty entertaining. With any luck, the old Cougar only needs a new brake and a new oil reservoir. It could definitely be worse, that’s for sure.