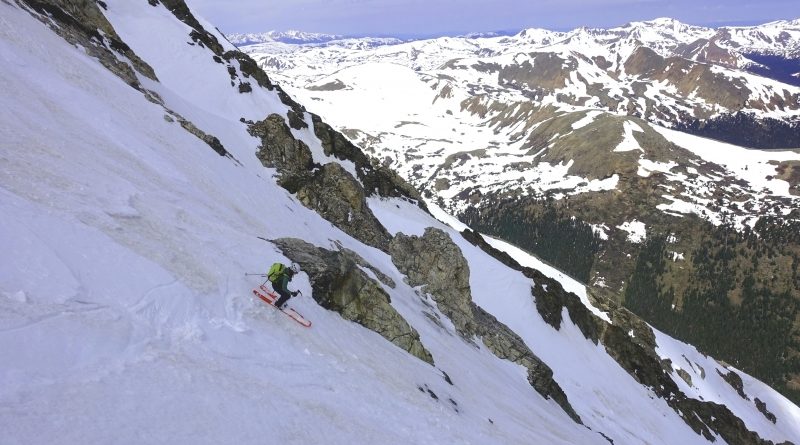 Looking for a late season line to ski? The Emperor Couloir on Torreys Peak is not only a classic, it holds snow late into the season. In fact, many routes near Torreys, especially in the Stevens Gulch basin, are great late into the year. But, with the plethora of snow we had this winter and spring, late season skiing this year has been exceptionally good. The Emperor Couloir is no exception.

Ranked the 11th highest summit in Colorado, Torreys Peak stands at 14,272 feet along with his nearby brother, Grays Peak (14,279). Being some of the most eastern of the fourteeners, these two peaks are easily noticeable from a distance. Torreys Peak has many ski lines on it. Perhaps the most known is the east-facing Dead Dog Couloir, which is one of the shortest lines. But the Tuning Forks and Emperor Couloir, which drop into Grizzly Gulch, offer 3000 vertical feet of fantastic skiing.

Torreys was the second fourteener that I skied during my fourteener skiing project. I skied it back in 2006 and was lucky to have descended the luscious Emperor Couloir. You can catch a glimpse of this iconic line for just a couple of seconds as you travel down I-70. This line is respectably steep, aesthetic, long, and fun. It has all the makings that a classic ski route should have. Yet, Dead Dog seems to get more love. But I love the Emperor much better.

We found snow levels in the valley to be almost identical to what we’d encountered while skiing nearby Mount Edwards at the end of May just last year… Such a difference in seasons. Speaking of Edwards, it was stacked… Much better coverage that when we skied it last May!

Up Stevens Gulch we went….

At the start, we met a solo skier who had intended to ski Dead Dog. He was behind us on the approach and we watched him standing at the base of the route, seeming to contemplate whether to actually climb it or not. Some significant rock fall in Dead Dog was a sign and the guy turned around and high tailed it back to the trailhead. If you ski Dead Dog, I recommend reaching the summit via the summer route to avoid rock fall like this. Torreys Peak and the Dead Dog Couloir on just right of the summit.

The ridge west of Mount Edwards.

Eventually we made our way to the saddle between Grays and Torreys and followed the ridge to the top.

Natalie and I at the summit.

Clouds had kept temperatures relatively cool so when we reached the summit, we knew we weren’t in a rush. After some time up there, we descended The Emperor Couloir. Snow the previous weekend had left a nice fresh surface for us at higher elevations. Natalie.

The lower half of the line was not as in good of shape as the top. Winds had blasted dust from nearby rocks onto the line. Still, it actually skied pretty well despite the local dusting. Natalie.

And then the end of the line…

As you can see, the end of The Emperor was indeed a giant slide path from earlier in the season. We took our skis off to cross the rocks on the right side and then skied the rest of the way down on dirty snow and through mangled trees until the crossing of Grizzly Creek. Then it looked like this. Do you see me making my way through the debris? Yeah, it’s a “Where’s Waldo?” sort of thing….

The Emperor slide path blocked the Grizzly Gulch road from any further travel up the valley. A trip to Grizzly Gulch means admiring the fabulous Grizzly Couloir.

We followed the Grizzly Gulch Road back to our car. One last shot of The Emperor on Torreys Peak.

So, if you’re looking for a late season line to ski, The Emperor is one. But Tuning Forks, Grays Peak, and Mount Edwards are also going to hold for a bit. So, get on it and keep skiing!

Summary
Article Name
Late Season Lines - The Emperor Couloir on Torreys (26 June 2019)
Description
The Emporer Couloir on Torreys Peak is respectably steep, aesthetic, long, and fun. It has all the makings that a classic ski route should have.
Author
Brittany Walker Konsella