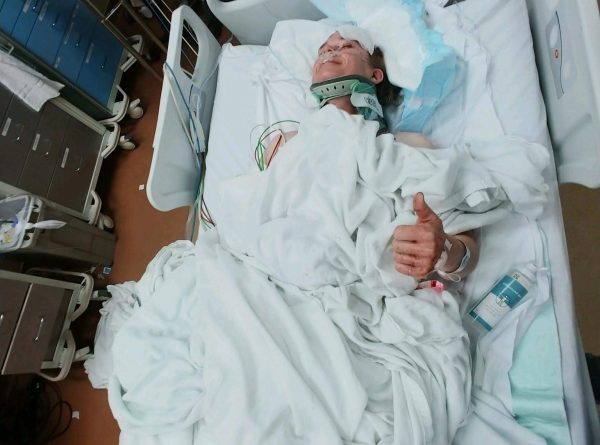 On July 6th, Frank and I left Crested Butte in the dark hours of the morning, driving toward Fairplay, with the intention of skiing a peak near that area. We didn’t know that tragedy would strike, so much that we wouldn’t make our way back to Crested Butte for two and a half weeks – and our lives would be forever changed.

When we arrived at the trailhead, we were discussing some options and I wanted to get a map that was in the back of my Subaru Forester. I was driving, parked the car on the dirt lot, and walked to the back open the trunk. The car was parked on an incline, and as I pulled on the hatch, the car began rolling backwards. I stumbled and the next thing I knew, I was under the car.

I was pinned down by my face as the tire rolled over my neck. I don’t have a clear memory of what happened next, other than I remember being thrashed around and moved by the car. All I know is that I wanted it to stop. I was helpless.

When the car was no longer over me, I started screaming. I didn’t know what else to do. Blood gushed profusely from my head. I held my hands to my head and blood ran all over them. Then I twisted and looked at my legs. My left thigh was mangled – it didn’t even look like a leg.

Thankfully Frank had been in the passenger seat of my Forester and he was eventually able to get the car to stop. Had he not, the car would have rolled off the edge of the road, likely injuring him too, and making the car undriveable. Frank ran toward me, reacting to the blood streaming from my head. I told him not to worry about my head so much because my femur was broken….

I wasn’t in pain. But I was beginning to realize the severity of the situation.

“What do you want me to do?” he asked. “I’m going to go into shock,” I said. “We need to get me into the back of the car and get help as soon as possible.”

Frank could not lift me himself. But, the Universe has an uncanny way of giving you the things you need when you need them most because just then, two people drove up to the trailhead and they helped Frank get me into the back of our car.

We didn’t have cell service there. As Frank began to drive down the bumpy dirt road, the pain began to set in in my neck. I began to realize there was a potential spine injury. At that point, Frank reached for our Garmin InReach and activated the SOS button. Expletives happened with nearly every bump as pain radiated from my neck. Frank help his phone in one hand, dialing 911 over and over. And finally he got someone.

A few miles later, an ambulance met us on the road, and a helicopter was seen landed in the distance. As the emergency medical personnel began to tend to me, the shivers started happening. “I’m going into shock,” I said. “Broken femur, neck, head,” I kept saying as I felt scissors on each leg, cutting my ski pants off. They cut off my shirt too and transferred me to the ambulance.

After a very short ride in the ambulance, they transferred me again to the helicopter. The nurse explained it was a 20 minute ride to Denver. To me, it felt like eternity.

I’ve never liked hospitals. But, when I arrived there, I was so thankful. I was still alert. I knew what was going on. I could answer details of the accident, tell them what day it was, and anything they wanted to know. They finally were able to get a good IV into me (my veins are pretty terrible for needles) and get me some of the pain medication I needed. A kind PA stitched up a large laceration in my forehead, which was deep enough to the the bone beneath. They also rushed me pretty swiftly into a full body CT scan to see exactly what was wrong with me. The also ended up doing an MRI of my head.

The exact order of events is somewhat scattered in my head now. But, somewhere in the mix, Frank arrived to the hospital. My friend Susan had been visiting the Denver area too and also came. I made it a point to try to remember the name of every nurse and doctor that talked to me to make sure my brain was working still. And I learned that the hospital I was at was St. Anthony’s – the best in the state for trauma incidents.

The scans revealed that I indeed had a broken femur (but nothing else on the leg was broken), that I had a broken neck, and a broken sternum. Yep, that’s right. A broken neck. I had numbness in my hands and arms, which aligned with spinal damage at the points where the vertebrae were broken. They did some tests on my function and decided I was still “neurologically intact.”

But there was still one more thing wrong with me. I had an occluded vertebral artery. Basically, that means that an artery that feeds my brain with blood was more or less squished, like a pinched straw. Because of this occlusion, a blood clot had formed, which presented a risk of stroke. As days progressed, we realized that the first 72 hours of this blood clot are the most dangerous and for this reason they were wanting to push surgery on my spine and femur off for as long as possible, and put me on blood thinners to treat the blood clot.

In the ER, they also put me under to reset my femur and put a pin in my tibia for traction. This means they basically had my leg connected to a pulley coming from the pin in my tibia, weighted with 15 lbs of sandbags. It was going to help keep my bone in place and minimize my pain.

I knew I had a long stretch of surgeries and hospital time and recovery ahead. But, just how much – that wasn’t clear. And even though the extent of my injuries was very severe, I was glad that it wasn’t even worse. So many other things could have gone wrong. I was feeling unlucky lucky, and happy to be alive. To be honest though, there was never a point during this incident that I stopped believing that I would make it through this. I sometimes wonder if that helped me pull through.