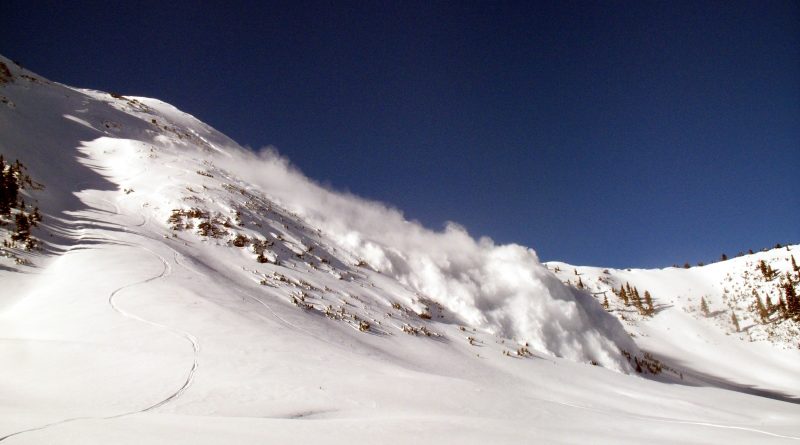 “Dumb things” is probably a little bit of a strong statement for what I hope these blog posts will be. Perhaps “Avalanche mistakes I’ve made and the lessons I’ve learned from them” would have been a more appropriate title, but missing the eye-catching alliterative aspects of this one. Part 1 can be found here, and part 2 is here.

It is my hope that these posts will at the very least offer something to the reader to learn from, since near misses are less talked about…

This incident took place in early December, 2010. As some of you may recall, 2010-11 was a good winter in Colorado, especially in the north. We were having a good start in Crested Butte, too, and we had skied some fairly aggressive lines in November since the snow was stacking up fairly quickly. One thing that comes up often in accident analysis is that small things can add up to the big thing. That certainly came into play here. On one of our tours, skier 3 (I’m just calling them skier 2 and 3 in case they don’t really want to be mentioned) blew up his snowmobile.

For those of you that aren’t familiar with the Crested Butte backcountry, we’re a bit of an anomaly in Colorado. While the area close to town and the ski area receive snowfall that’s average for the state, the backcountry receives twice as much, usually in the 5-600″ range. Combined with less wind than areas closer to the divide, our deep backcountry can act more like an intermountain zone than continental. But you need a snowmobile to access it easily.

So when we were making plans to ski, we were limited by 3’s dead snowmobile. Instead of skiing an area that had already received 130+”, we’d ski an area with closer to 60″. 2 said the plan was to ski Mount Emmons (near the town of Crested Butte), probably on the shield. I remember saying “no way”, but the conversation turned to just taking a look and maybe skiing Redwell bowl or Red Lady bowl, either of which I’d be more likely to feel comfortable with. I didn’t like the “let’s just take a look” method of route planning then, and I like it even less now. There are routes that you should be able to eliminate from your home as being unsafe for the conditions. But when you’re out there, standing on top of those routes, you can begin justifying them if they look good. that was the case here, since we ended up on the shield.

We got to the top of Emmons and Redwell looked bad, with rocks jutting up here and there. Red Lady looked ok, and it already had 20 or so tracks already in it. But the Shield looked nice. And that’s when all those mental games started. If we just slide across that little bench (which really wasn’t much of a bench at all), and then get in that little tube, it will be fine. Sure, there was a recent remote trigger just a mile away, but that was a few days ago, and that was east facing and we’re skiing more north. Before I knew it, we were heading towards the shield. We’ve all made excuses and justifications to ski something, but you have to guard against it. Unfortunately, human nature is to do otherwise.

Between the 3 of us, we had over 50 years of local backcountry experience. None of us had been in a big scary slide in the local backcountry, despite skiing more than our fair share of days. I often look back and imagine one of my less experienced partners being with us that day. If that partner had said “the Shield looks good, because of A, B, and C”, I doubt we would have skied the Shield. I trust 2 and 3’s opinions in a way that I wouldn’t trust just about anyone else’s. (For those of you keeping track of all the heuristic traps we fell for, this one would be the expert halo, and the one that hit us the hardest.)

I still wasn’t feeling great about our terrain choice when I dropped first, but like I said, my partner’s confidence had overwhelmed my own reservations. The skiing was OK- some rippled powder and the occasional wind hardened section. But I also felt some very punchy and hollow snow. It was bad and I knew it. Halfway down I turned on the jets and barely made turns to the bottom. 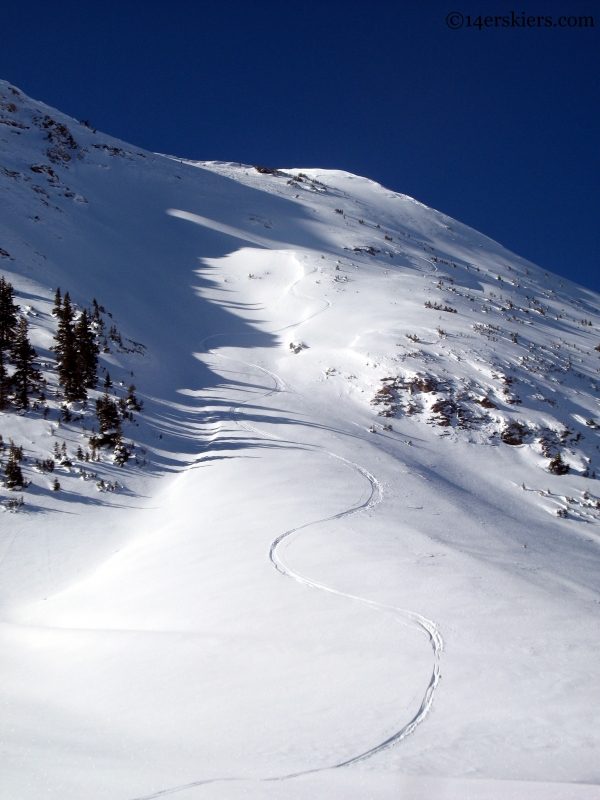 There is one piece of gear that can prevent a slide (if you don’t call your brain a piece of gear). Obviously, it isn’t a beacon or an airbag. It’s a radio. We didn’t have radios on this day, but if we had, I would have told 2 and 3 NOT to ski that slope. I knew I just got away with one, and I was holding my breath as my partners skied down. Even today, I don’t ski with radios nearly enough. Most of my partners don’t have them, or the battery ends up being dead, or they don’t want the weight, or something. But I think radios are well worth using…

2 made it down just fine. I was in the middle of saying to 2, “Did you feel the snow…” when the avalanche started on 3. He was gone in a half second and I never caught a glimpse of him as the slide roared down. I was already zoomed in and looking through the viewfinder, so I just kept shooting photos as I tried in vain to spot him. 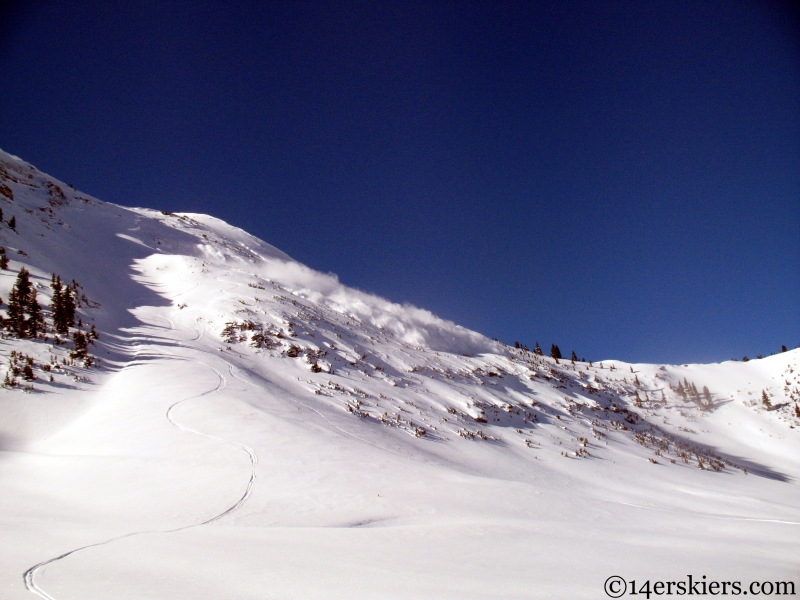 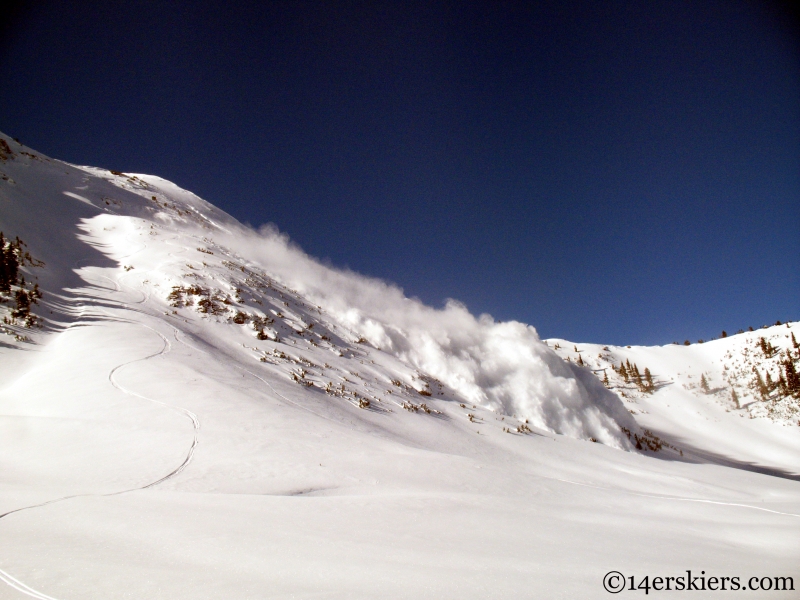 2 and I were in a safe zone (at least we were skiing one at a time and stopped in a safe place!), on the other side of a roll from the runout so we couldn’t see much. We had one thing going for us- the apron was big and wide with no terrain traps. So as I crested the roll, I saw one of the greatest things I’ve ever seen: 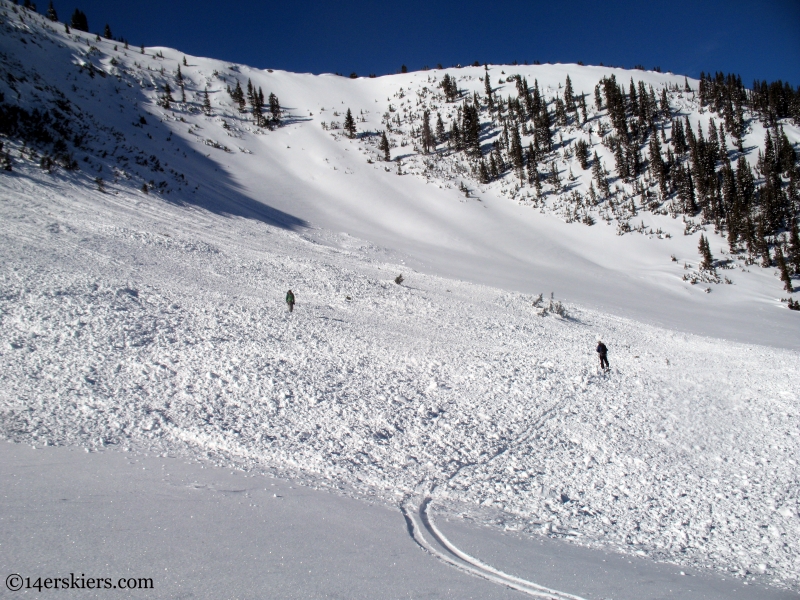 3 is on the left, having just stood up and shaken the snow off himself. One ski was gone, though he found it the following summer, along with his hat, glasses, and one pole. We adjusted our gear so 3 would have skis and poles, since he was beat up. 2 and I took turns with one ski and 2 poles for a couple thousand feet to the valley floor. We were still using Fritschi Freerides back then, which was a big plus- I’m not sure we would have been able to adjust tech bindings enough to fit the different boot sizes.

In hindsight, we made a bunch of mistakes- that’s pretty clear. But we weren’t blind to it- in fact we kept the conversations going even if we came to the wrong conclusion. 2 and 3 are convinced that if we had just traversed into the tube, which was our intended route, we would have been OK. And that’s probably true- 90% of the tube stayed intact. For me, that’s probably too fine of a line to mess with. I didn’t want to do that because it would have meant a slow traverse in a potential start zone. I wanted to ski diagonally towards the tube as quickly as I could, but instead, the terrain pulled all of us farther left than we ever intended.

Anyway, stay safe, watch those heuristic traps, and live to ski another day. Don’t forget to practice- I played with my probe the other day and realized it was in need of an upgrade. If I’ve convinced you to buy a set of radios, like BCA’s, check them out: 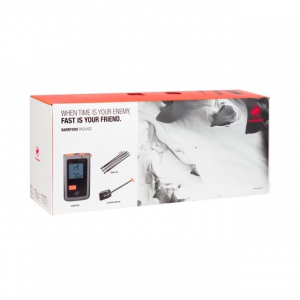 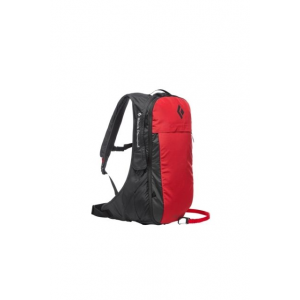