Approaching Memorial Day weekend in Colorado, the weather kept looking worse and worse, eventually culminating in a Winter Storm Watch for our area. Since we’re looking to ski alpine lines at this time of the year, a snowstorm wasn’t exactly what we were looking for and we started exploring other options. The Tetons had been on our short list all year, and while the overnight lows weren’t as cold as we would have liked, we decided to give it a chance and made the long trek northward. Tired from the long drive, we were looking for routes that weren’t too long, and after talking with our friend Hans and seeing the cover of “The Black Book”, we decided that the Hourglass (or West Hourglass if you prefer) on Nez Perce was the route for us (spot the 3 skiers): 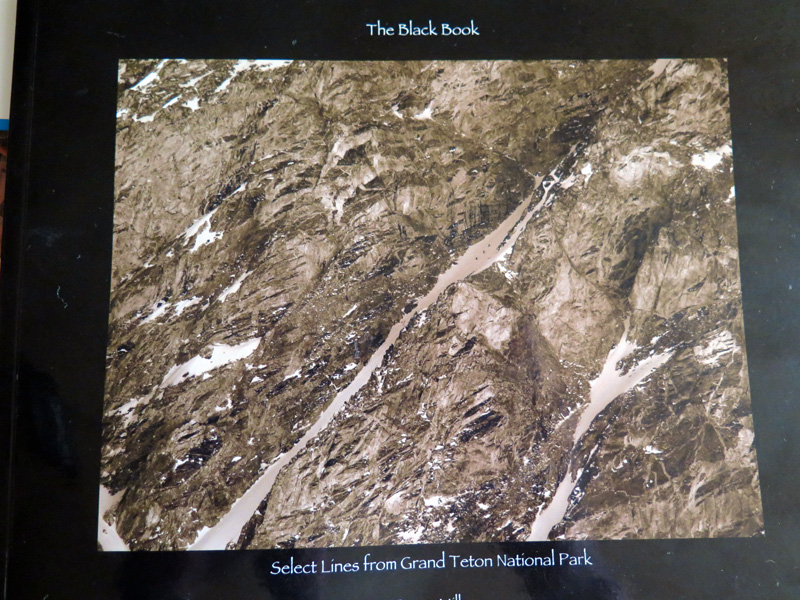 The approach to this route is the same approach used to access Grand and Middle Tetons, but unlike other trips to this valley, we chose to approach via Burnt Wagon Gulch. Pick your poison- the tedious sidehilling of the Lupine Meadows trail, the equally tedious morraines of the Bradley/Taggart route, or the more direct Burnt Wagon route- none of the routes to upper Garnet canyon are particularly fun. Overall, we were on snow for most of this route, so it wasn’t bad. Early morning light from the trailhead- Nez Perce is on the left. 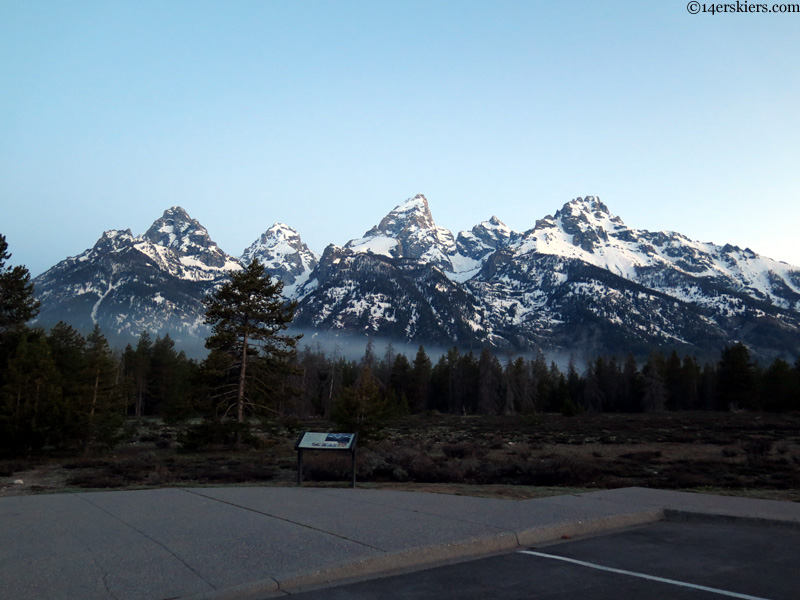 Once exiting the woods, you’re in an amazing location filled with possibilities. 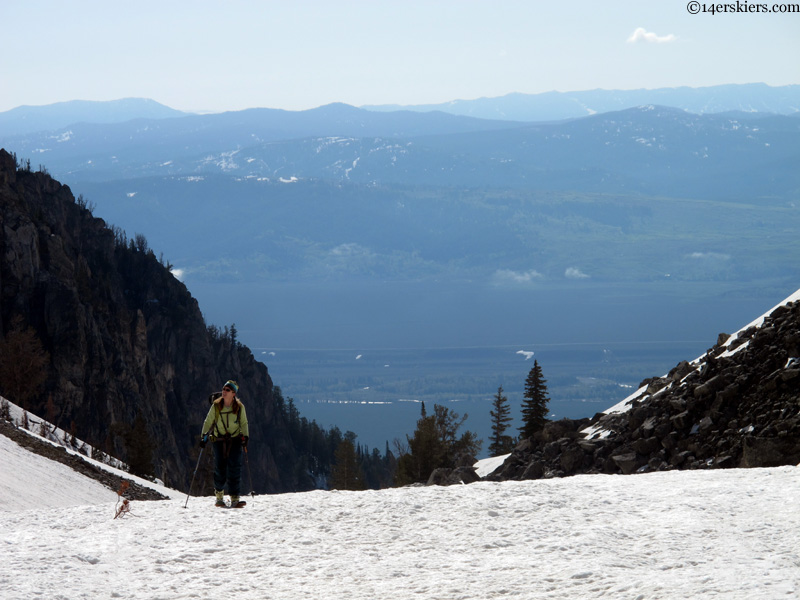 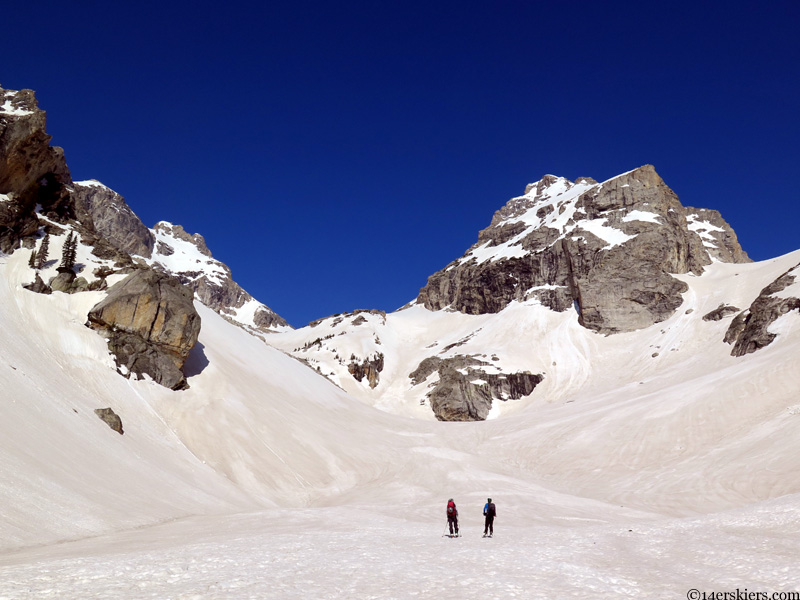 The West Hourglass couloir doesn’t look like much, all things considered, from the bottom, with much of the route hiding. As often happens in ranges with more vertical relief than the norm here in Colorado, what looked like a quick climb ended up being far longer than I expected- a little over 2,500′ in fact. 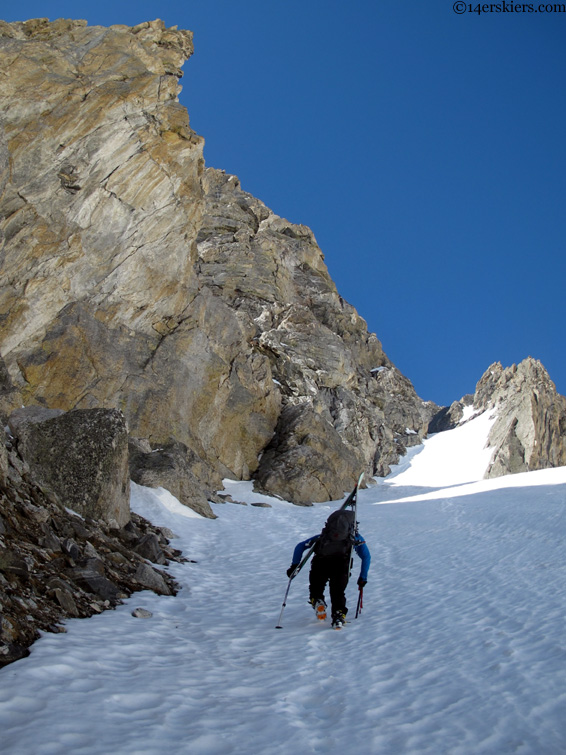 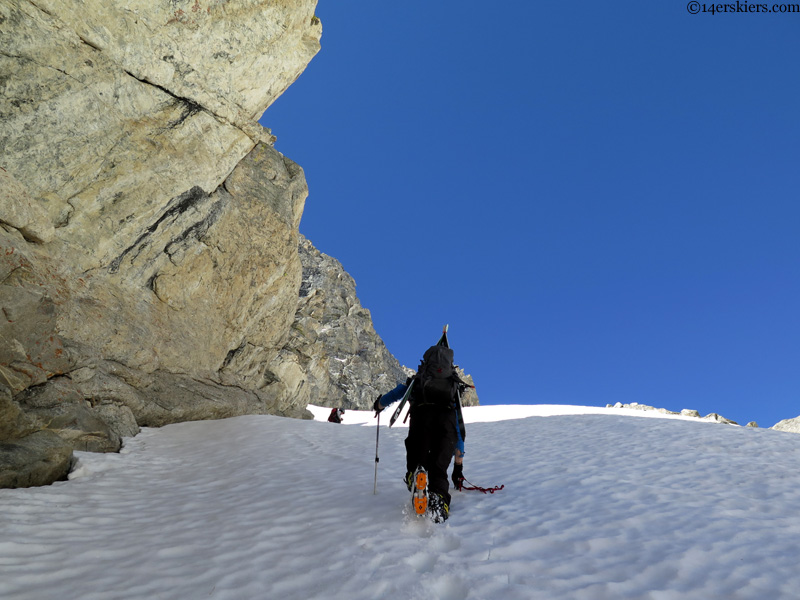 From the top of the couloir, we were greeted with great views of the surrounding peaks. Cloudveil Dome and South Teton: 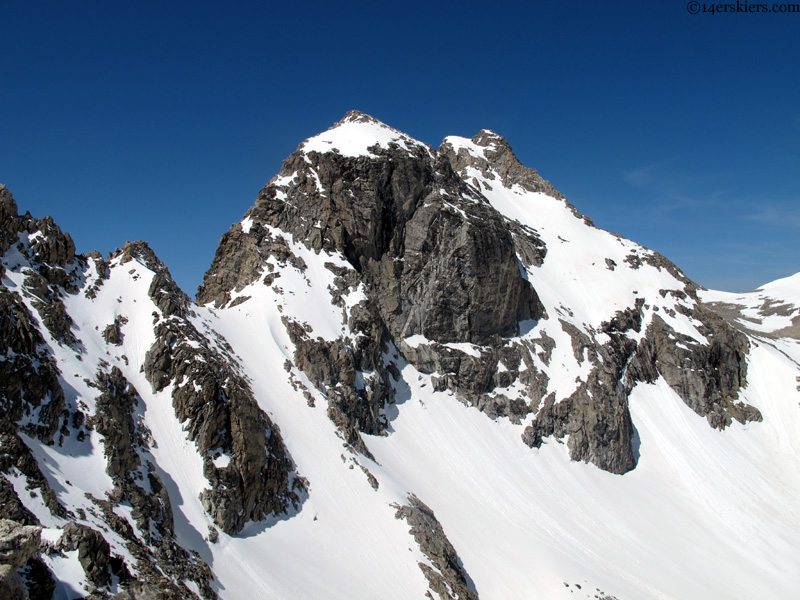 Great views of the Middle, with the Choinard and Ellingwood couloirs: 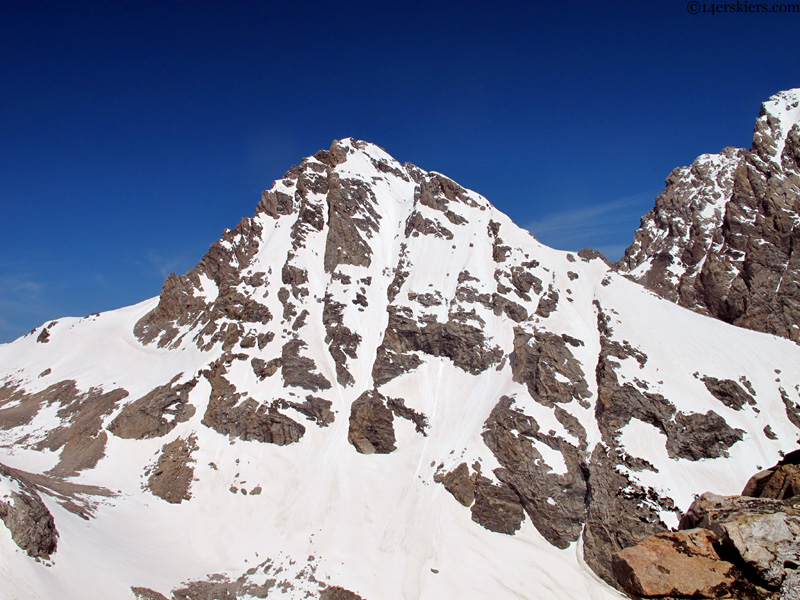 The route to the summit is a 4th class scramble which we skipped, especially in light of the warming temps and mediocre overnight freeze. 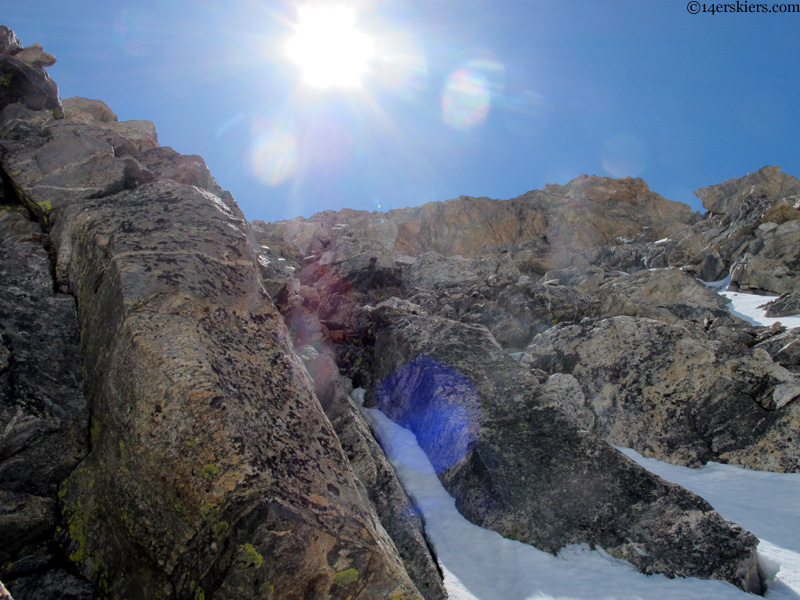 We also had a great view of the Grand. The Otterbody route is very visible, as is the top of the Ford. 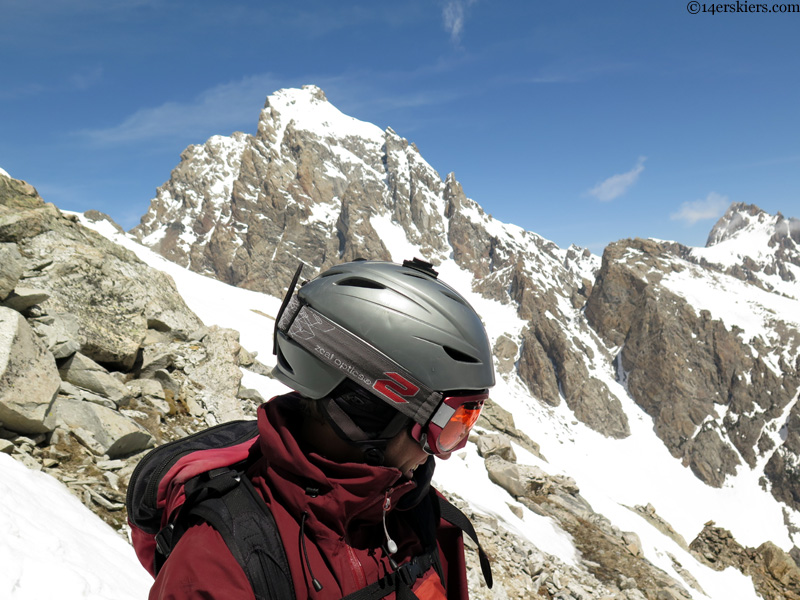 Conditions were all over the place- frozen in the shade, and a bit past its prime in the sun. Overall, this was still a great route, considered a classic in the Tetons. Brittany: 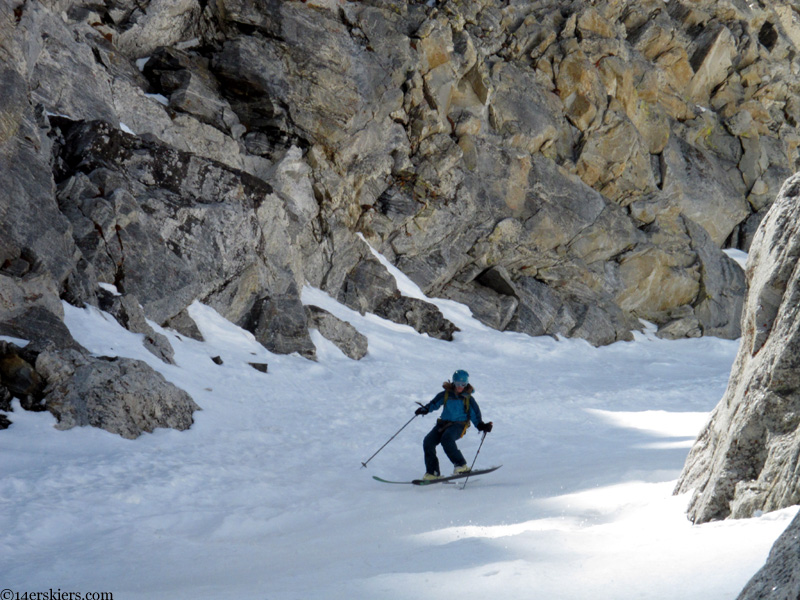 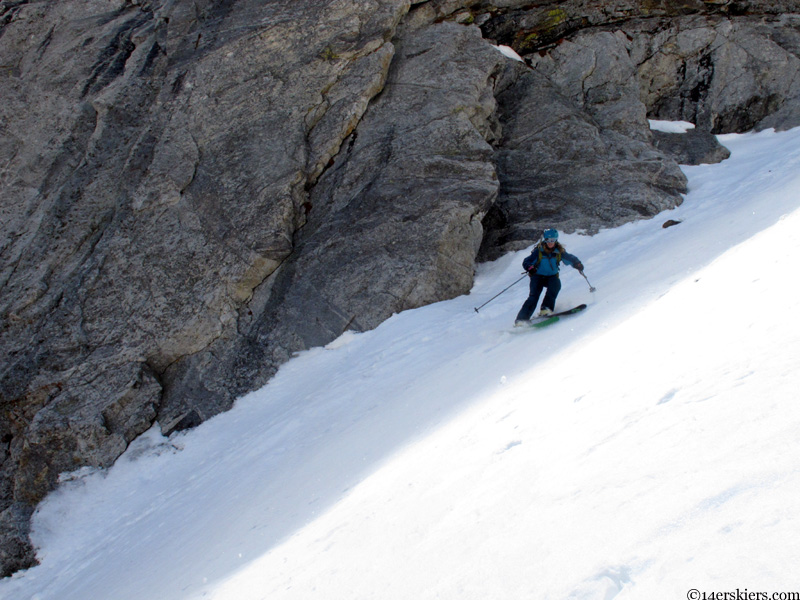 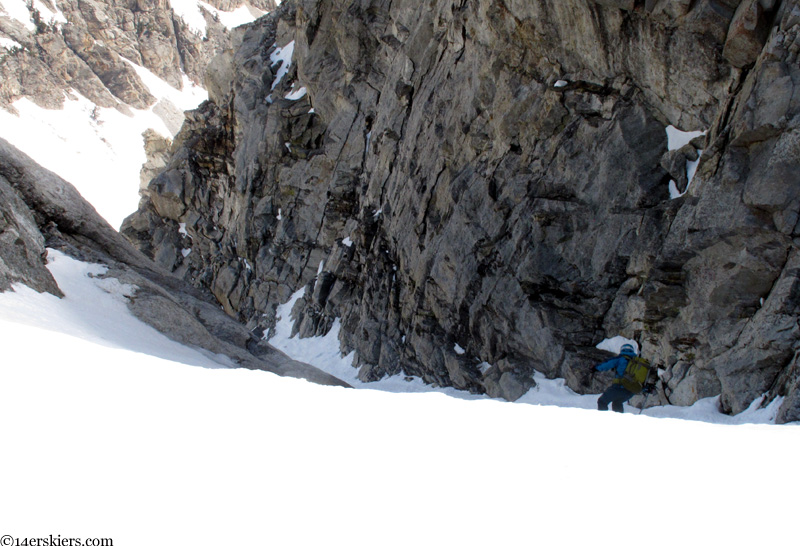 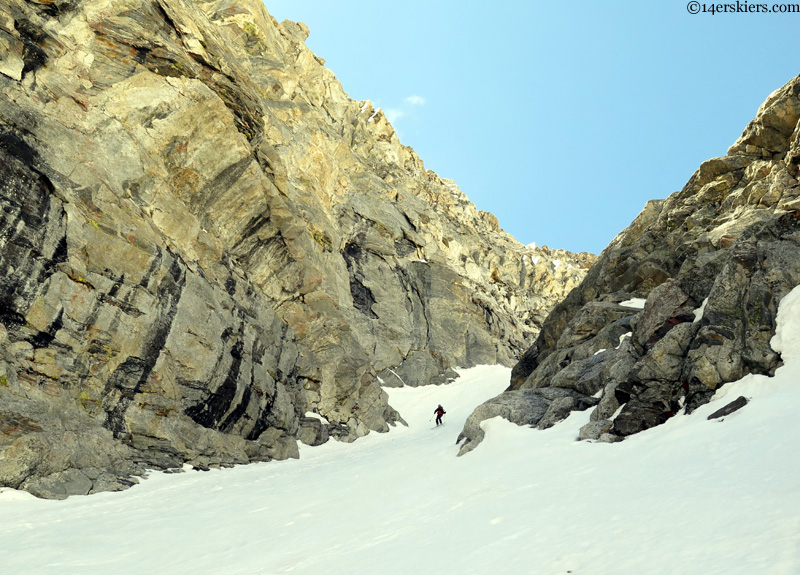 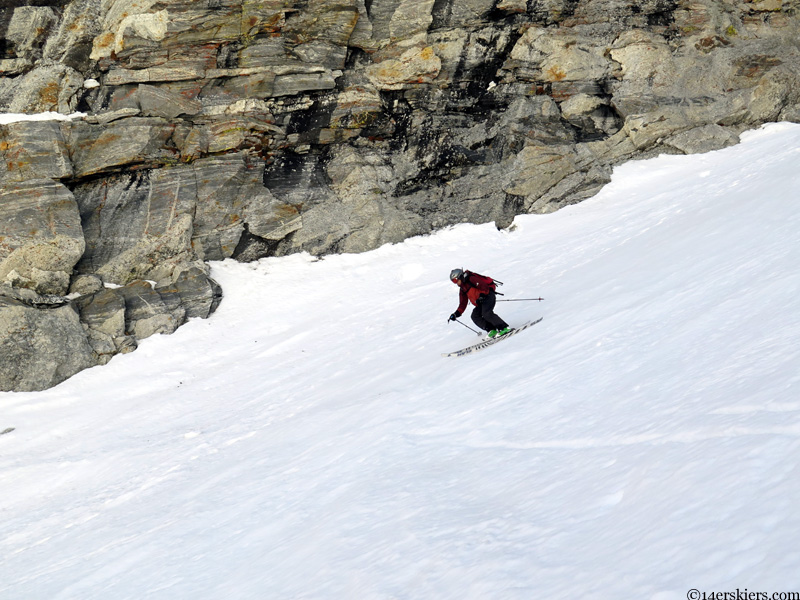 Hans had climbed halfway up the couloir with us, when he had decided to stop and ski down. Amazingly, it must have been a premonition, as on of the heel pins on his Plum bindings had sheared off. He waited for us in the valley far below. Did I mention this is a 2,500′ line? 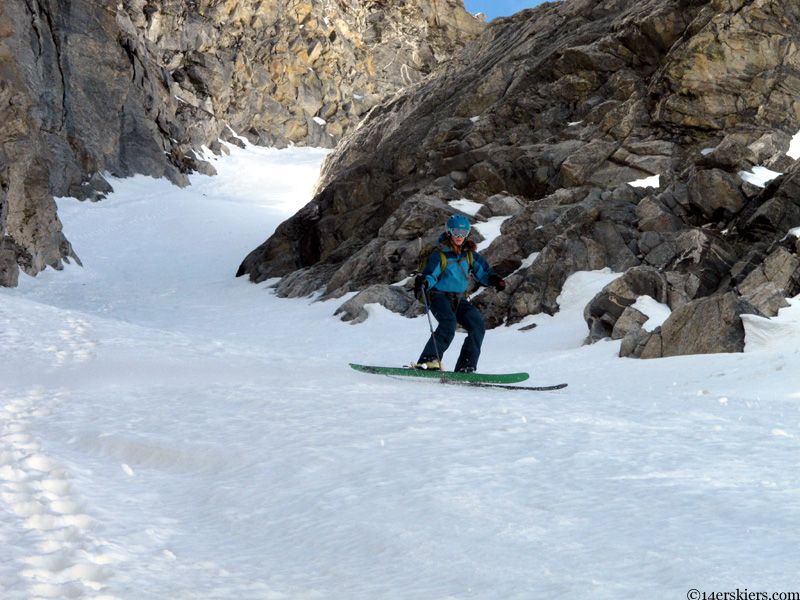 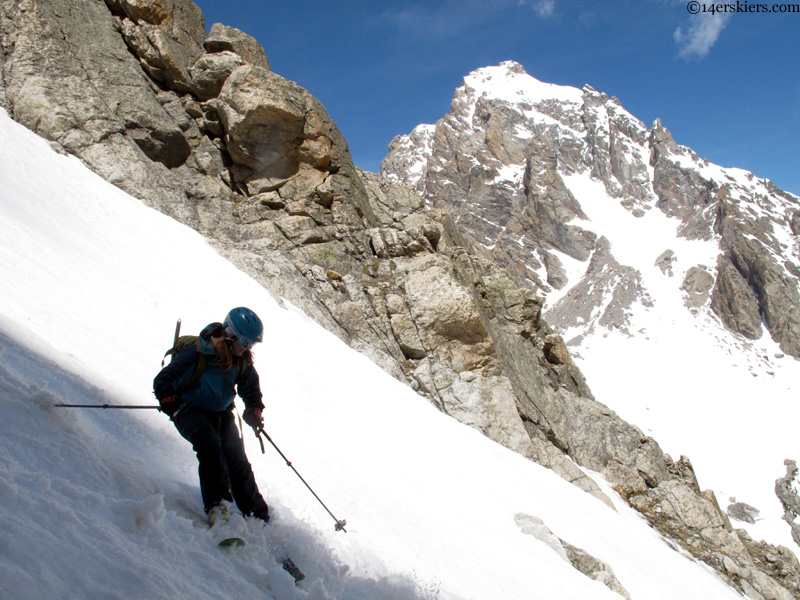 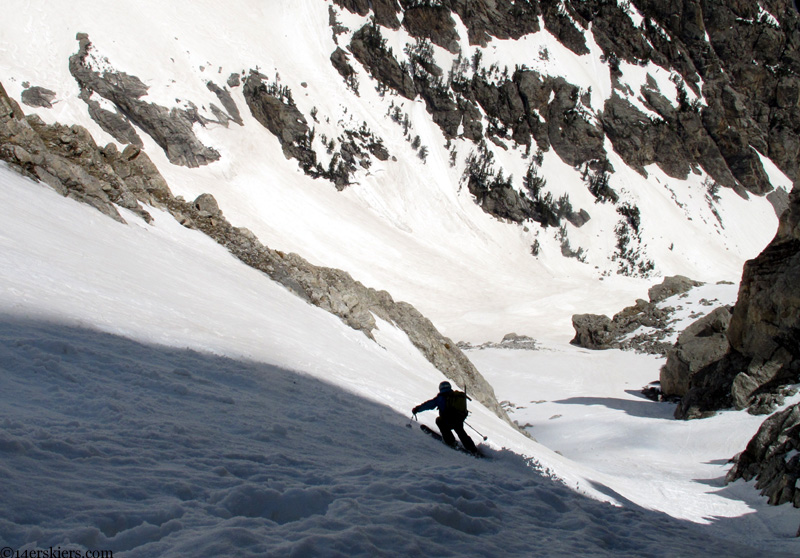 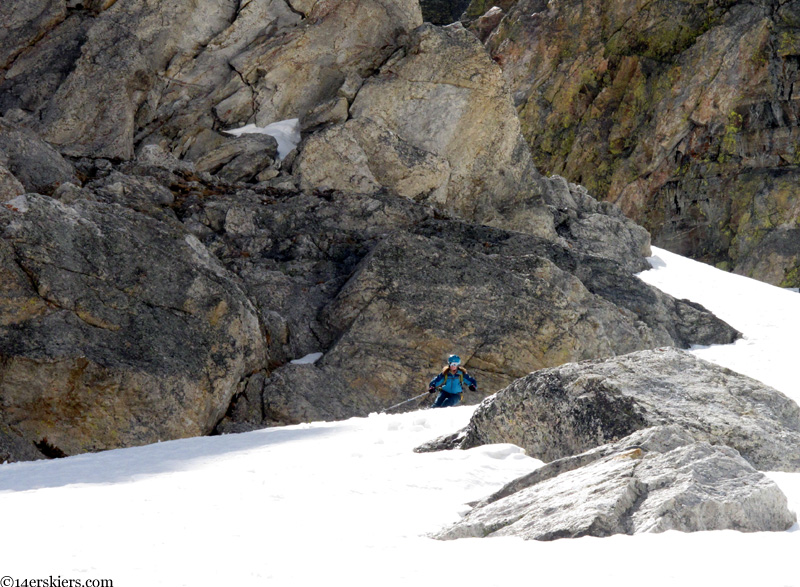 Great skiing even low on the route: 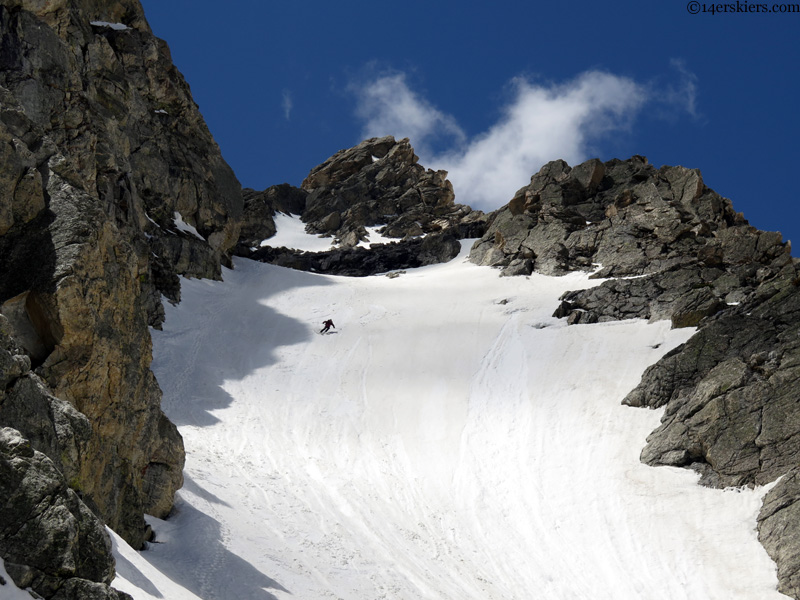 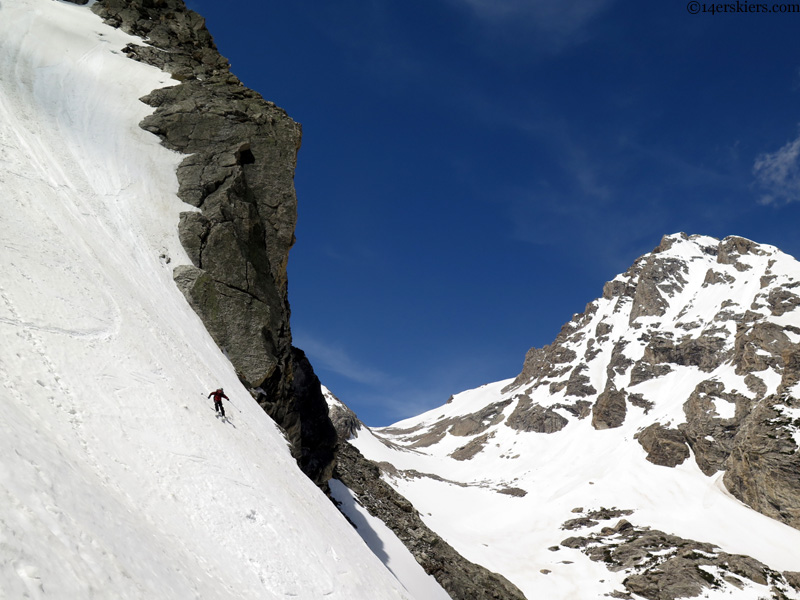 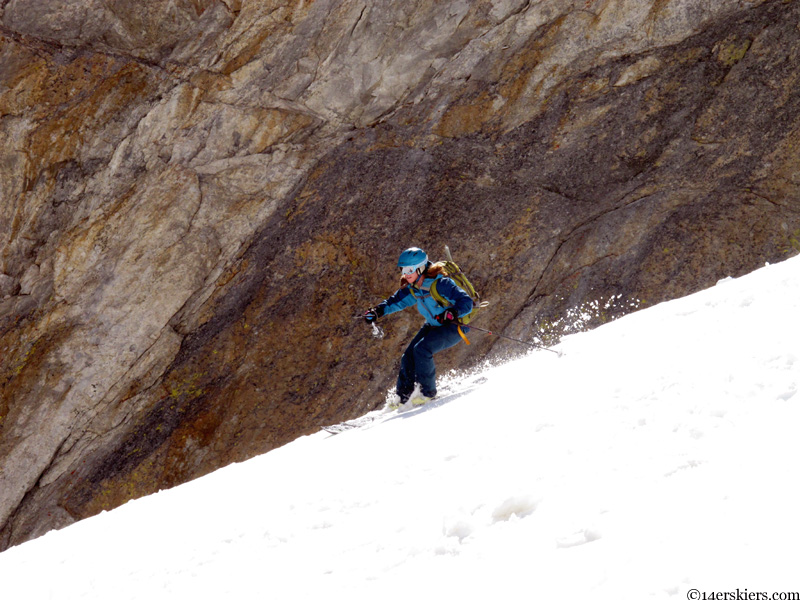 We were able to ski most of the way to the valley floor, far below (it’s close to 5,000′ from the trailhead to the top of the line). 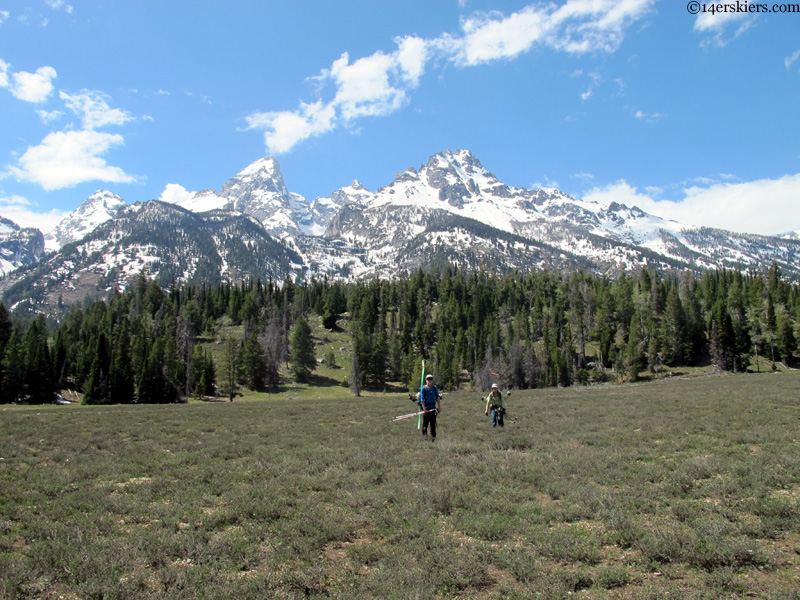 It’s easy to see why this is considered a classic line in a range filled with classic lines. The beautiful rock walls, the location in the midst of the big prizes of the Tetons, and the deceptively long length made for a great day. It also let us know the conditions we were dealing with- light freezes (at best) for 10 days. While the mostly North facing Hourglass route was fairing well, we could see the damage on other routes we had in mind, like the Ellingwood couloir, which had a big runnel in it. And that was on top of the fact that wet slides were booming off all the sunny slopes around us. We headed to Hans house sondering just what the next day was going to have in store for us…