Our final day at the Sheepshead Cabin dawned clear and windy after a few measly snowflakes fell the day before. Despite our enthusiasm for the cabin and the terrain that can be accessed by it, the conditions were not matching that enthusiasm. Like the conditions we left behind in Crested Butte, the snow could be described as “transitional”, “variable”, or just plain “crappy” depending on your point of view. Despite the wind that created the conditions, we could still see the occasional protected patch of “rippled” powder that is so often what you’re looking for after a wind event. We came to ski, and we were going to find some good alpine skiing somewhere. Or at least ski something aesthetic while trying: 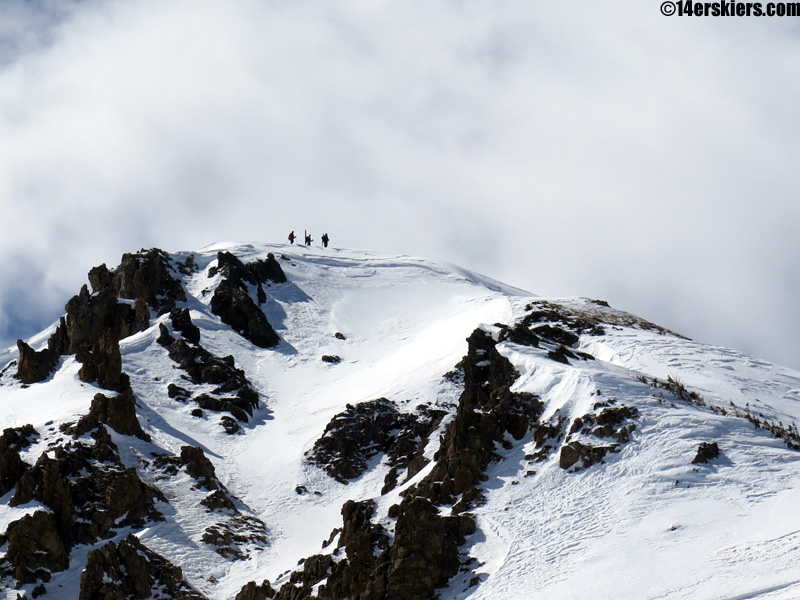 And while we were at it, we were going to keep looking at all the great terrain surrounding us. Pam and Brittany: 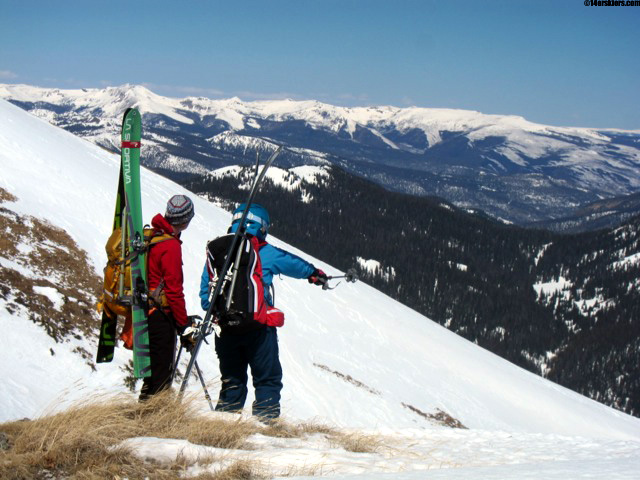 Pam, Brittany and Susan headed out to a peak and found quite a bit of that perfect aspect that still had soft snow.

The last avalanche cycle hit this area hard, and we saw a lot of crowns that were only beginning to fill back in: 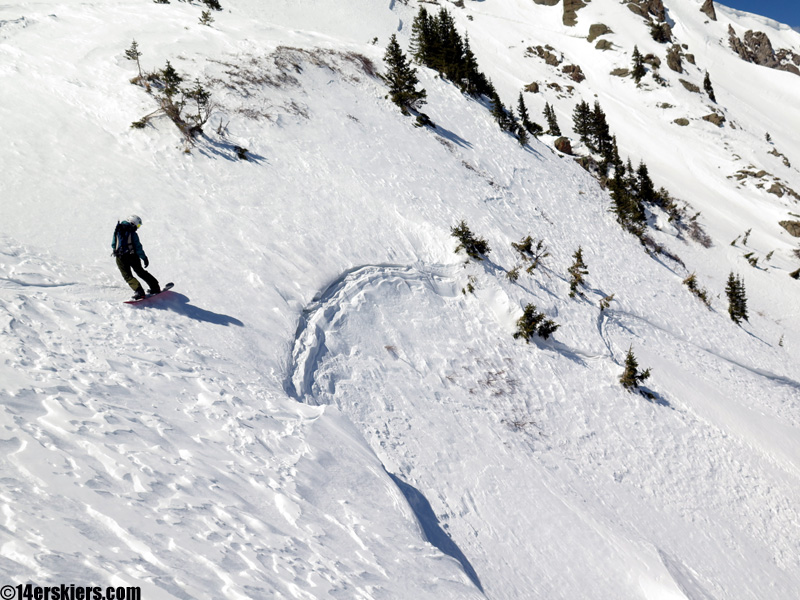 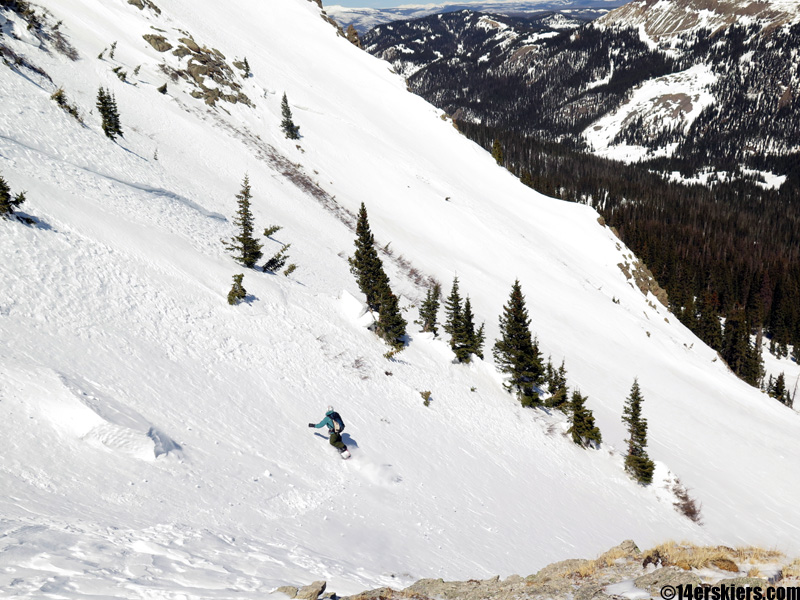 Susan finding the “rippled snow” I was talking about: 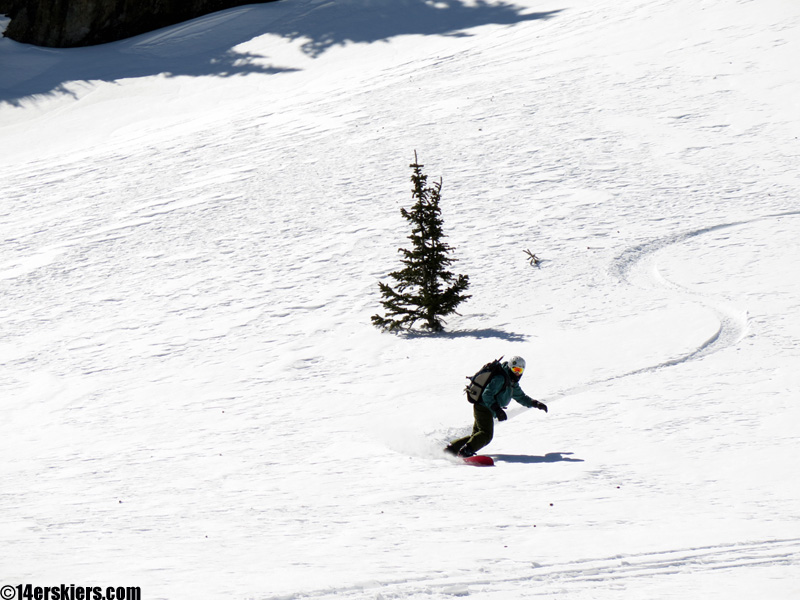 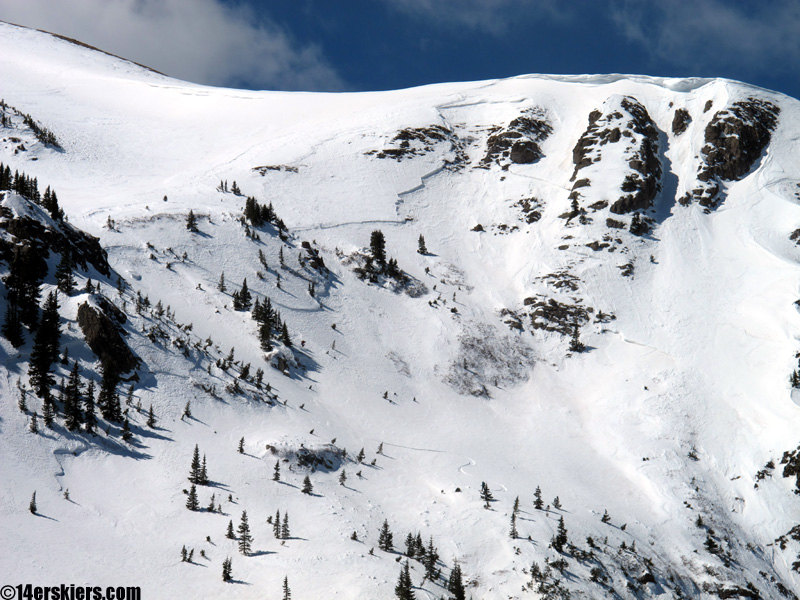 Meanwhile, Chris, Ben F, Ben M, and I went for the aesthetic chute we looked at the previous day. Ben: 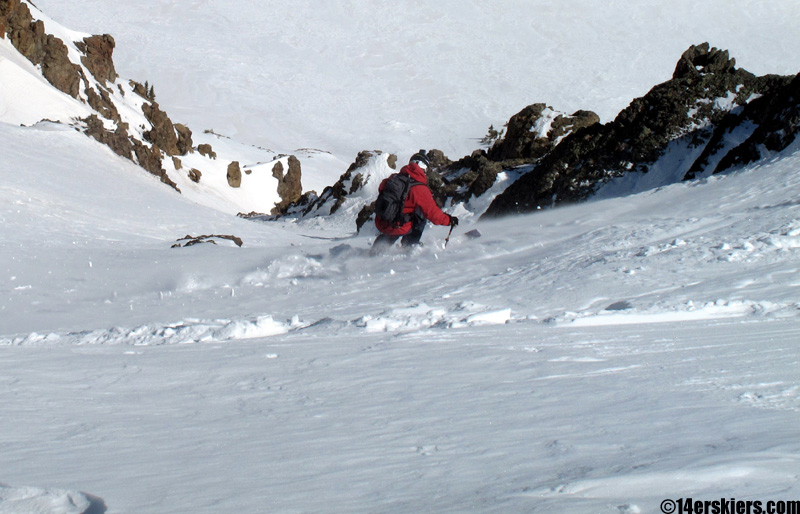 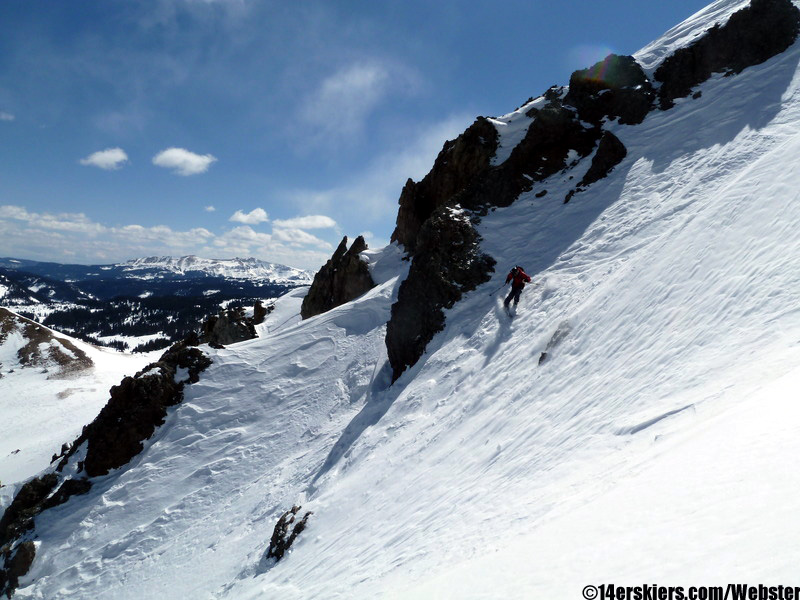 The apron was surprisingly good: 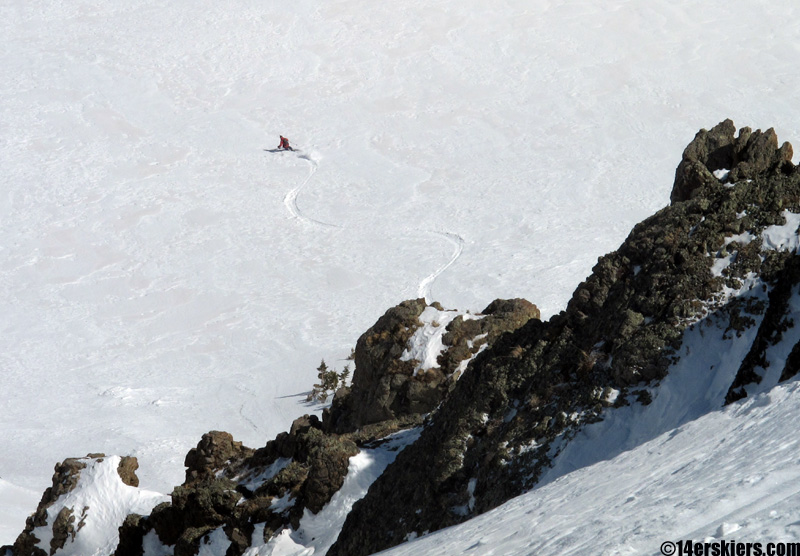 Apparently this raven followed me down my run. I like ravens. 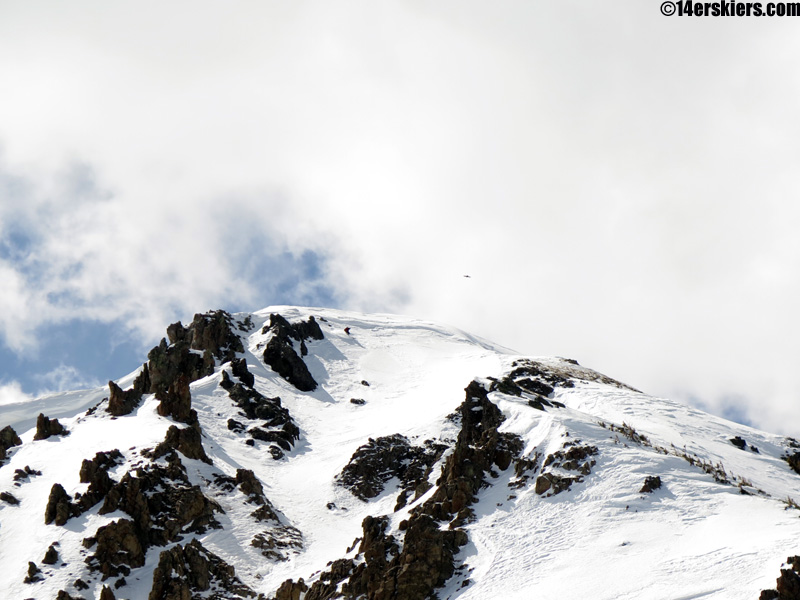 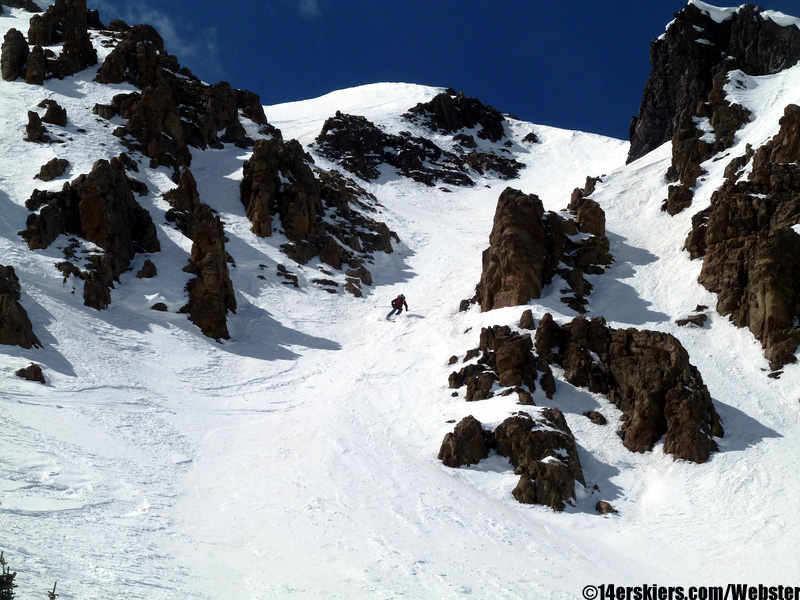 The skiing was better than we expected, so we decided to delay our departure and take another run, with the two groups switching runs. This is a remote area, so it shouldn’t be surprising that we saw an endangered species on our second run. Homo Telepithicus had long been thought to be extinct until they began reappearing in mountain areas in the 1970’s. In recent years, however, sightings have been increasingly rare as the more robust Homo Randoniens wins the survival of the fittest. Here is the rare Homo Telepithicus we spotted: 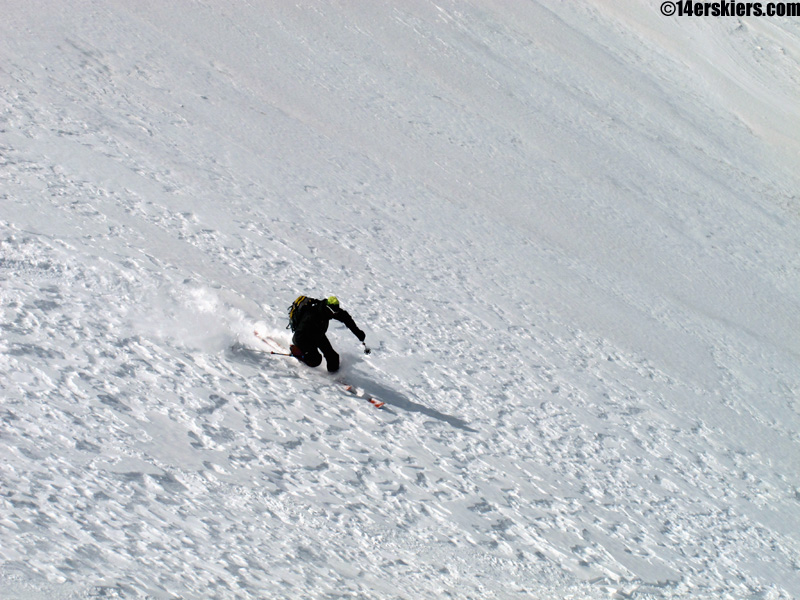 Meanwhile, we continued to a narrow chute which looked promising and indeed had the best snow of the day: 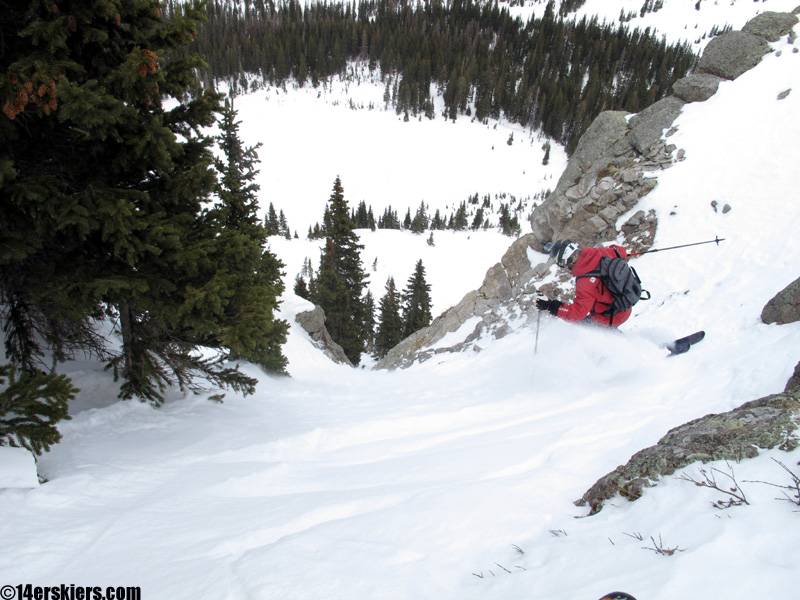 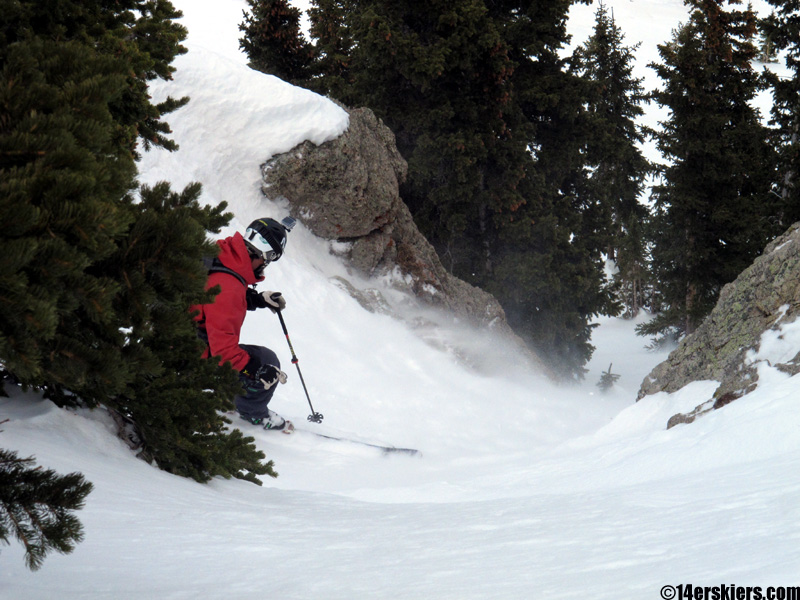 Susan dropping into her second run: 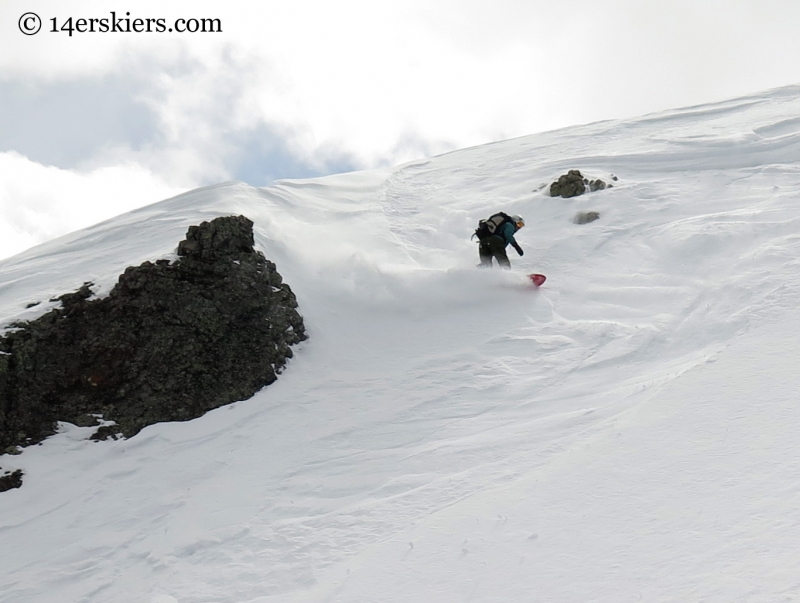 So many line variations above Brittany: 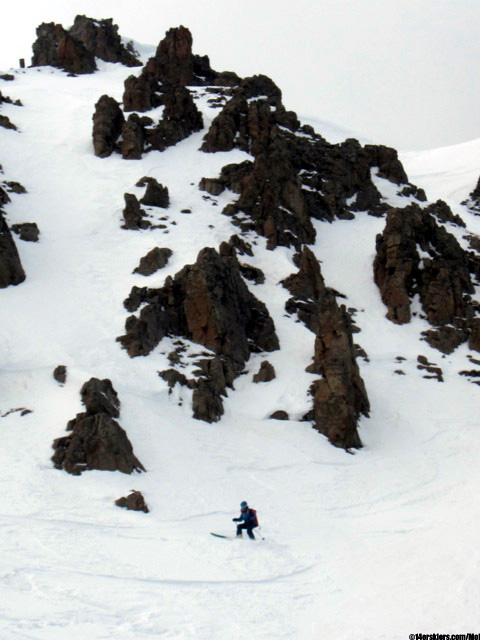 The real measure of how good a ski destination is can be seen in the context of the conditions. When we booked this trip, we fully expected to find some good stable powder skiing, or at least some corn skiing. We found neither, and yet I think everyone would happily go back. Why? The potential is plain to see- we just came up short when we rolled the weather dice. We’ll be back- if not to this cabin, at least to this area- it’s too good not to.