Since moving to Crested Butte roughly 20 years ago, I’ve looked up at the backside of Crested Butte and wondered about the skiing potential. The most obvious line is the Country Club Couloir, aka Skyland couloir, but before last weekend, I hadn’t skied it yet. Unlike the more straightforward (but still difficult to navigate) Buckhorn Couloir, the CCC is often done with a little bit of ropework. South facing and in the low snow zone that the ski area sits in, the line needs at least an average year. After the past two rough years, this year has been relatively deep, and the CCC was definitely in. 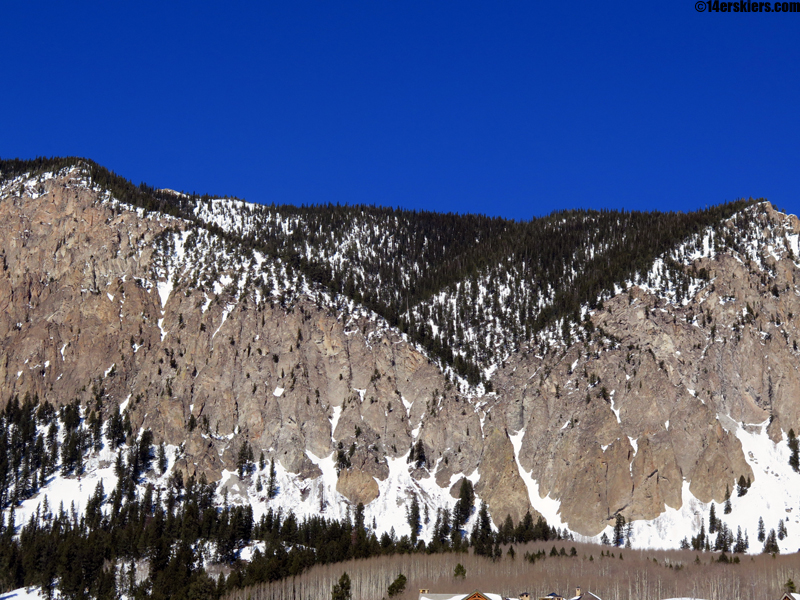 While the top of this line is the ski area, CBMR’s closed boundary meant that we would be ascending from Brush Creek. It’s worth it though- from the views to the rock formations to the giant old trees, this is a special part of the valley. 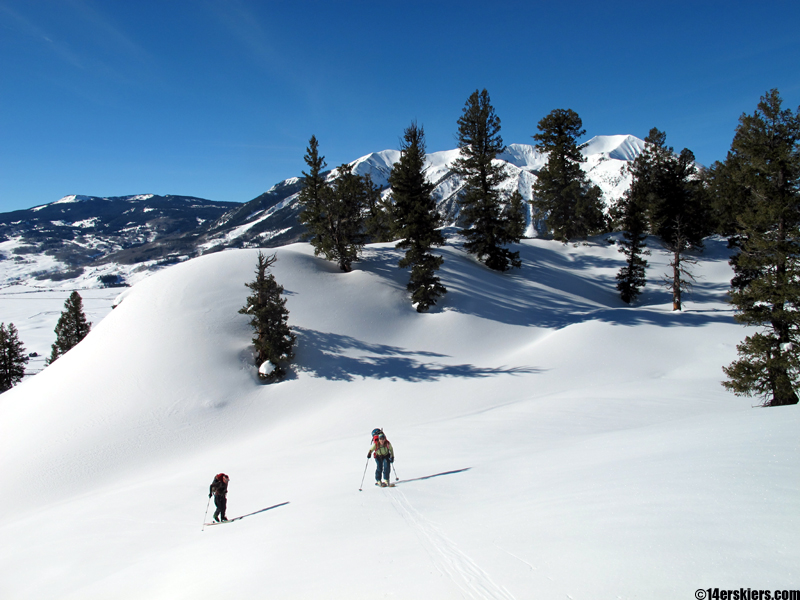 We stopped short of the ski area boundary, watching skiers ascend the peak while we ate our lunch and changed over. 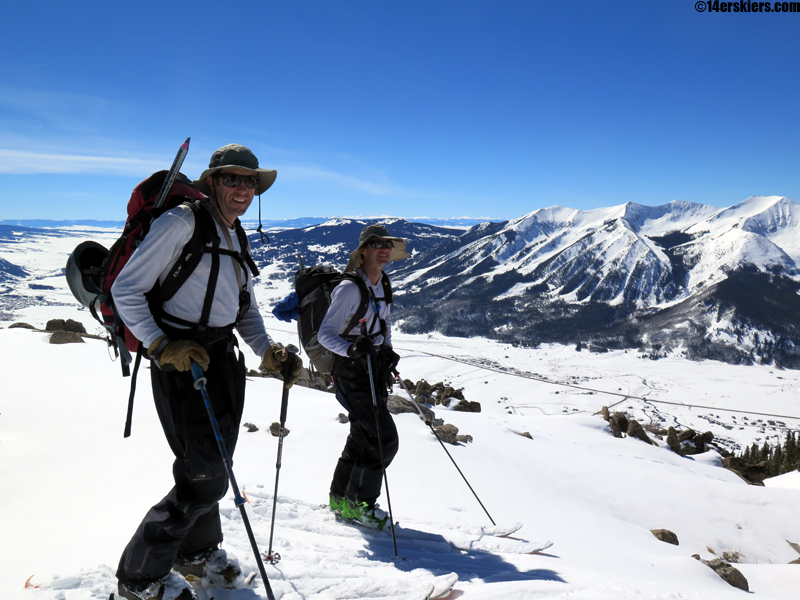 The turns off the top were incredibly fun. If this pitch faced North, it would be one of my favorites. As it was, we still had nice corn snow. Pete: 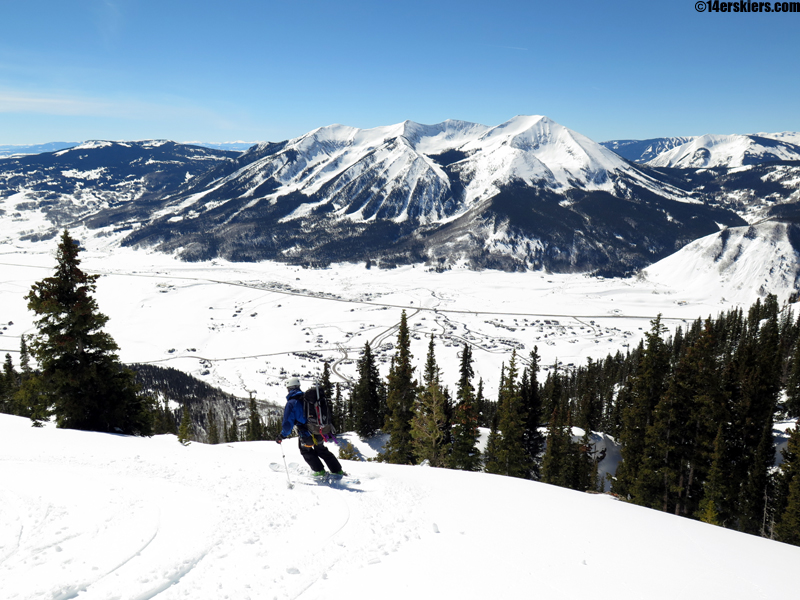 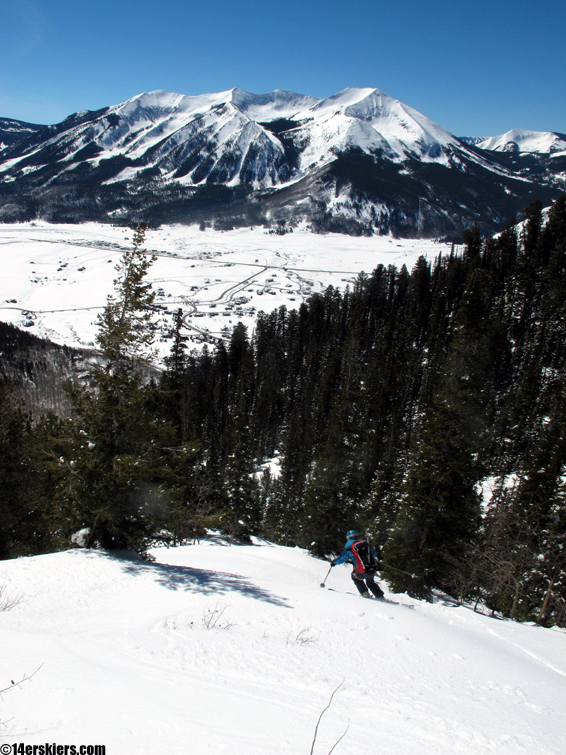 Pete. The lower we got, the more our route took us into gullies, which we did our best to avoid. 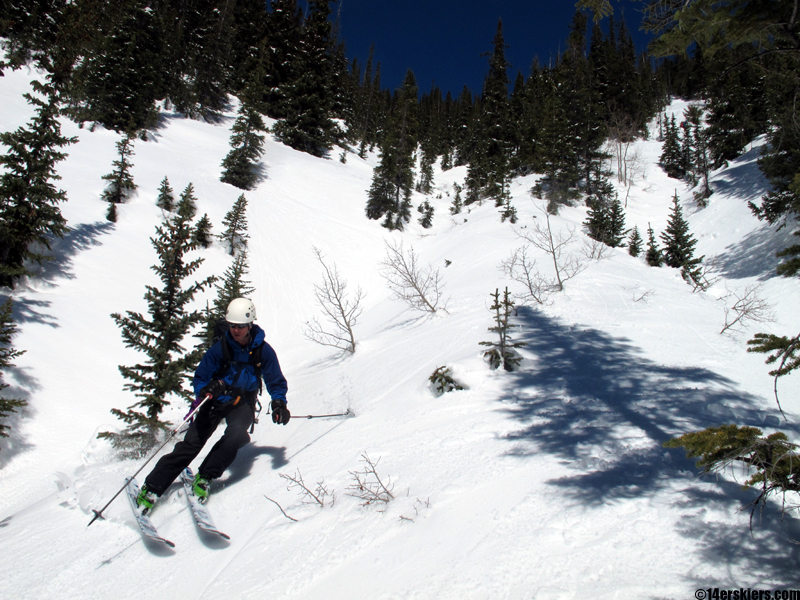 All of a sudden, the easy gladed skiing ends and you see this: 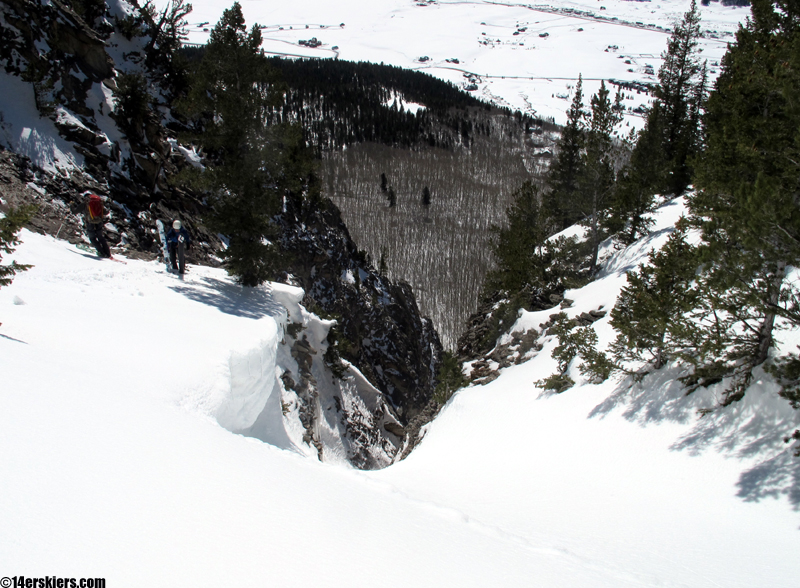 It’s a really cool spot to be, and you can really feel the power of the couloir below. The rap is straighforward, thanks to the perfectly positioned tree. Pete: 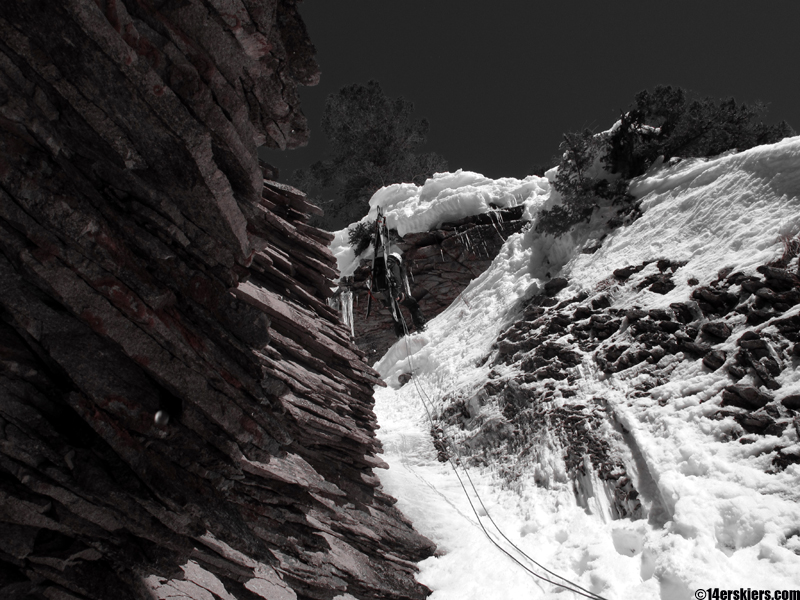 In a big snow year, with difficult skiing, you might not need a rope. With crampons and an axe, the downclimb would also be easy. Josh Macak, clearly enjoying his vacation: 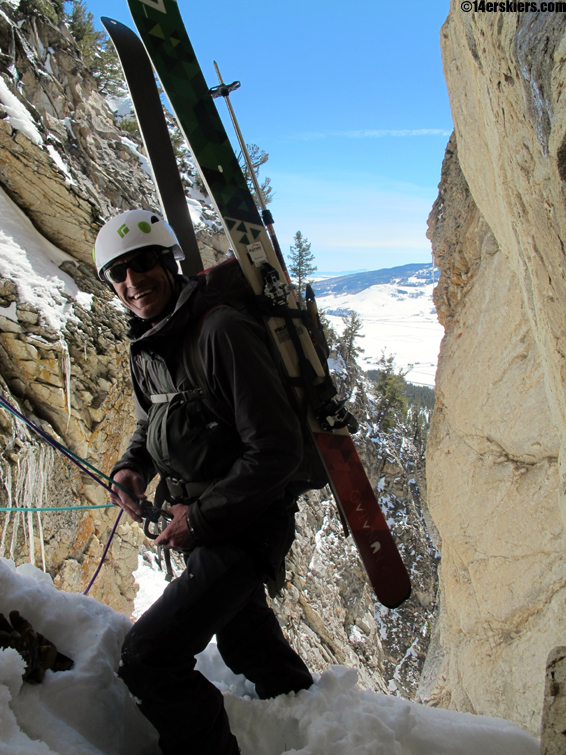 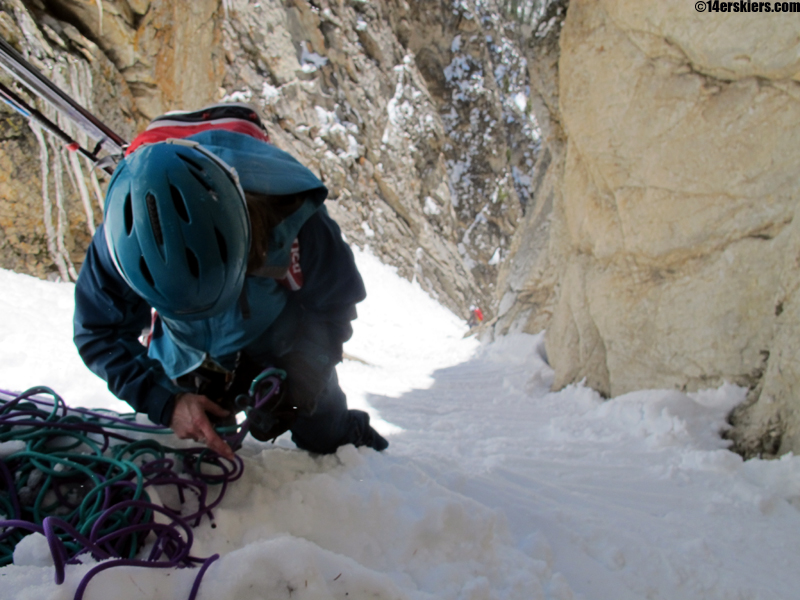 Josh skied down the couloir, scoping out the rest of the route and yelled “It goes!”. Upon further review, he decided maybe not, and we skied a very short pitch. Pete: 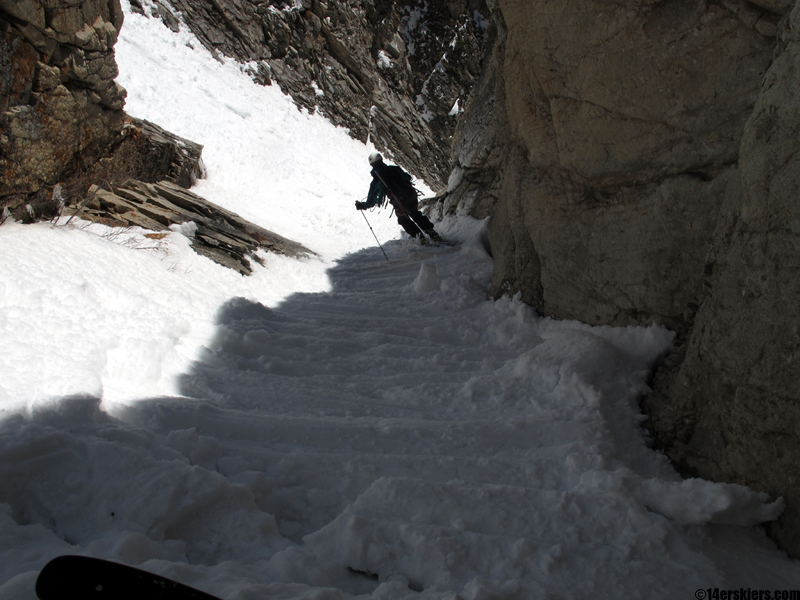 Our friend Jarrett had been this way recently, and we found his Piton for rap number two. Brittany: 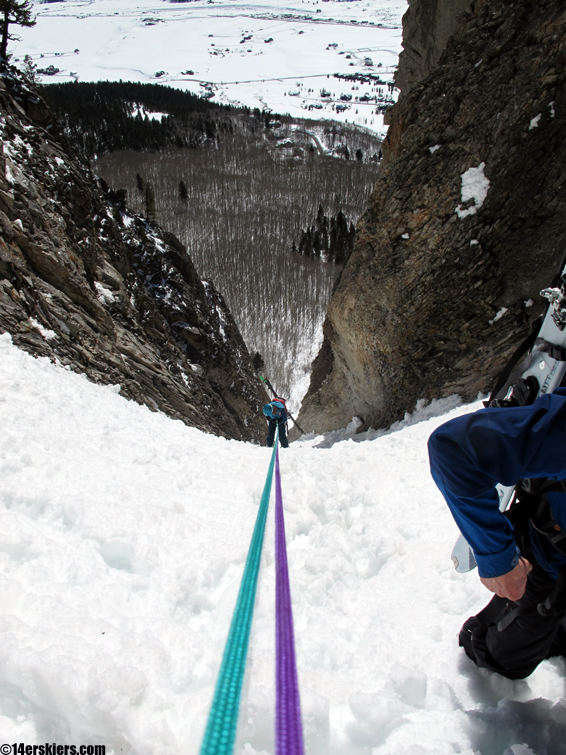 Again, the couloir was oh-so-close to being skiable, but a 15 foot narrow section with a bit of ice made it a dicey proposition, especially since the “speed-scrubbing” zone wasn’t exactly huge. Even after this rap, the couloir again narrowed to pretty much exactly 180cm, though we skied through that one. Pete: 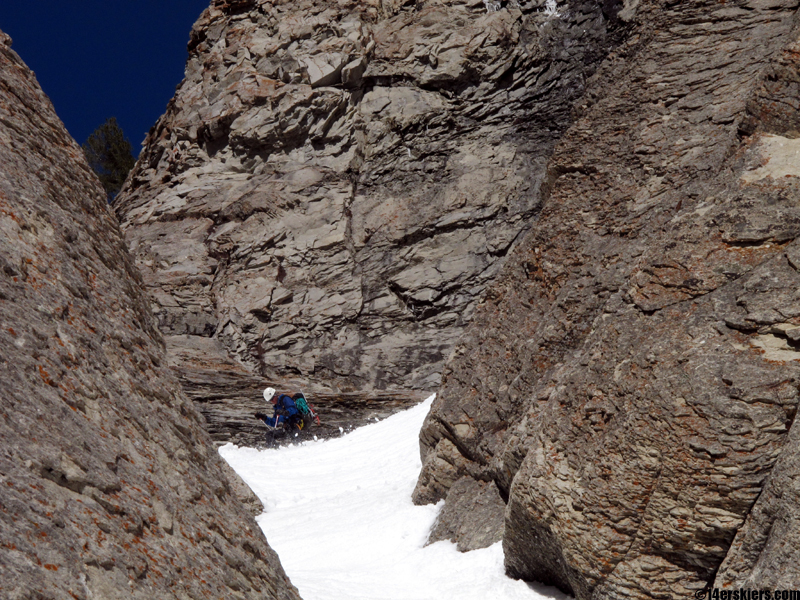 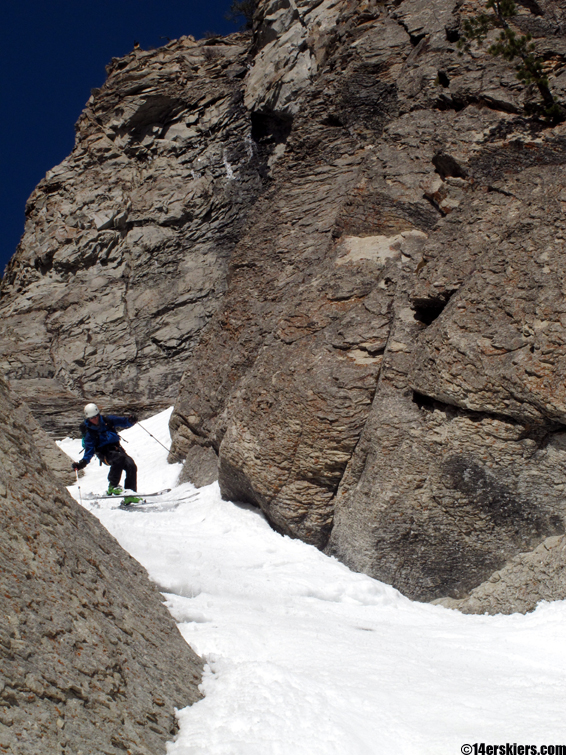 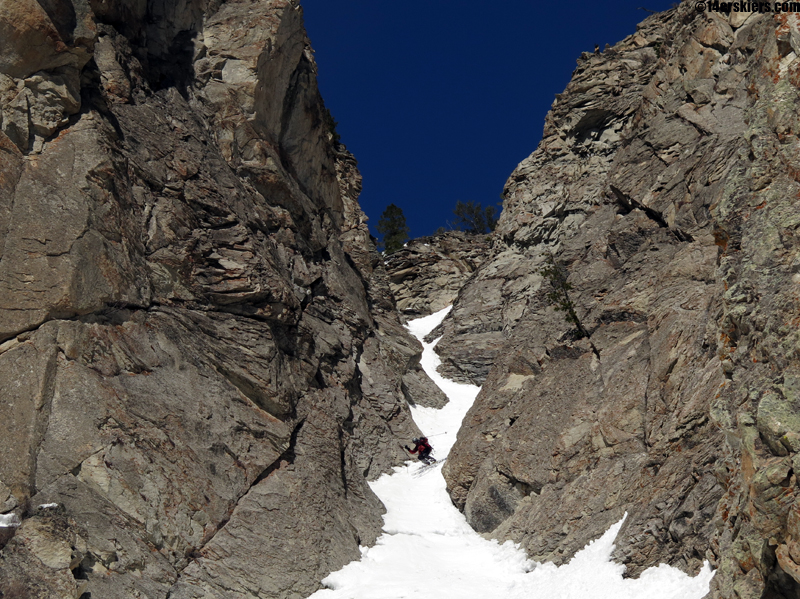 Once through, there was nothing left to do but “Warren-Miller” the rest: 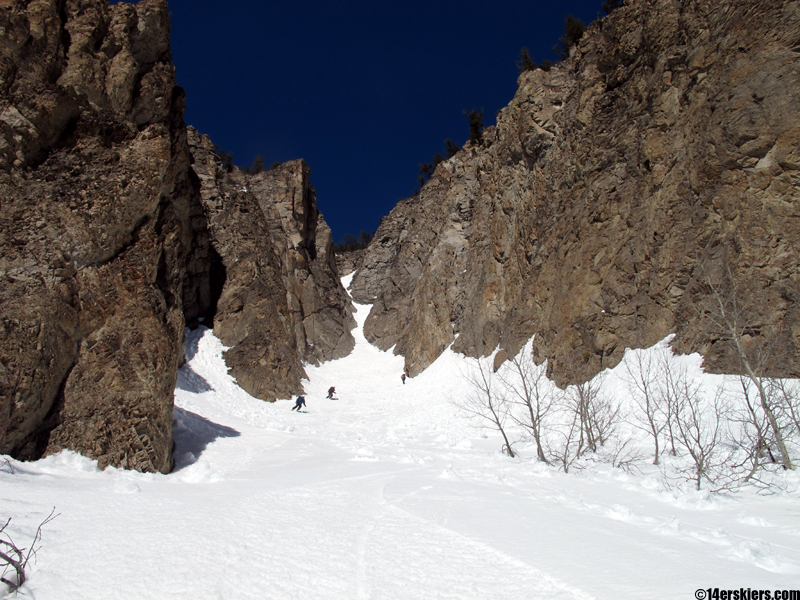 All in all, a great ski on a great mountain. From the amazing terrain of Crested Butte Mountain Resort, to the Terminator chutes, the the routes on the South side like this one and the East facing terrain of 4th and 5th bowls (also accessible from Brush Creek), Crested Butte has a lot to offer, especially if you’re willing to work for the backcountry options.