Of all the ski trips I’ve taken, this is the most memorable one, and the one I most want to do again. Don’t get me wrong, skiing in the summer in South America is great, and the word gluttony comes to mind when talking about Alaska. But only in Europe does history, culture, and big (and I mean really big) mountains come together in a perfect way. Plus, back in ’01 the dollar was strong and Europe was downright cheap. 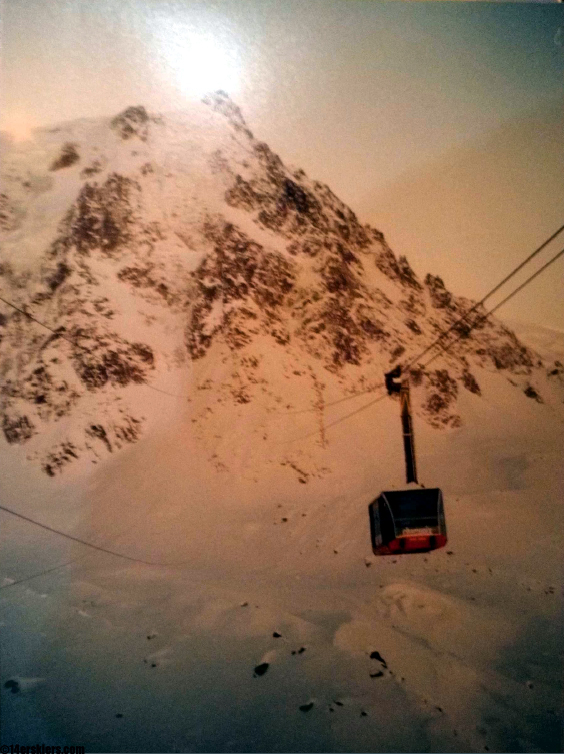 I don’t have great photos from this trip. For one thing, my camera was lost or stolen at some point on the train from Geneva to Chamonix. For another, this was in the days of film when you never got as many shots as you really wanted.

I arrived in Paris, the only place I could fly with the vouchers I had received when I got bumped from a flight at Christmastime. I was meeting friends in Cham, but I was traveling solo, with the extent of my French vocabulary summed up as “Parlez vous Francais?” So I wandered around de Gaulle trying to find out how one might get from Paris to Chamonix. Being Europe, it’s not so hard, of course, you just need to find the subway and then the right train station. Somehow I got bunked with five boys around the age of 12, and they never did get what I meant when I said “Parlez vous Jetlag?”, but I made it anyway.

One of the first runs was the Cosmique couloir. It was a good snow year, and when people talk about rappelling into the Cosmique, I’m confused because we were able to step over a couple of rocks and ski thigh-deep snow to the valley below, nearly a 10,000′ descent. Then we ate French bread and drank cheap French wine and life was good. 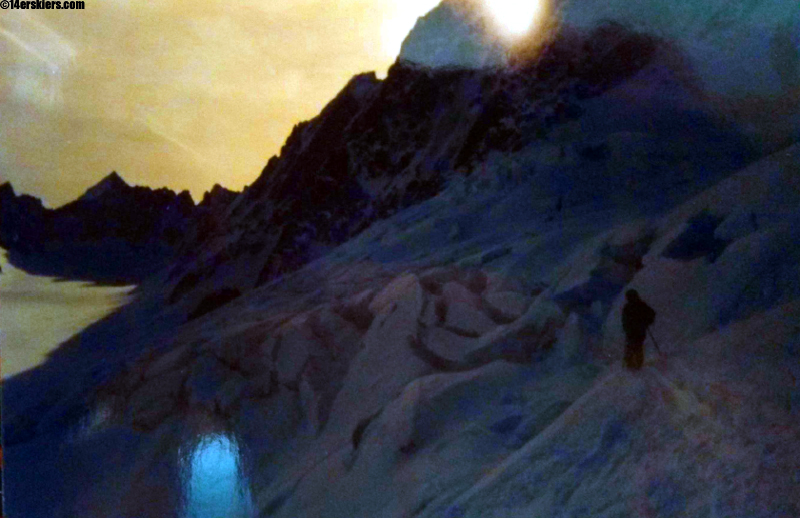 Catching the train again in Vallorcine, outside Le Tour: 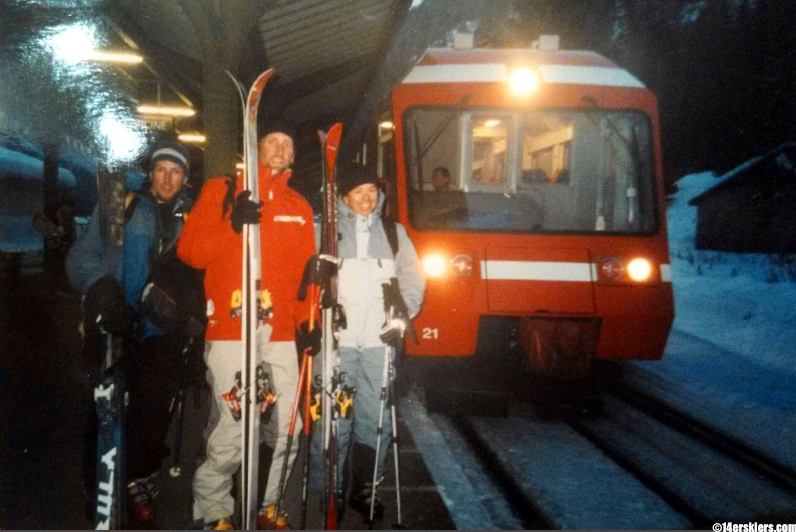 Brittany says I look like I was in high school in the photo above. My friends Jay and Alison left after a week or so, but I decided that I needed a month in Europe to make it worth my while. Luckily I ran into my friend Kirsty from Rossland, BC the very next day, and she had made some new friends as well. So we toured up the col du Chardonnay: 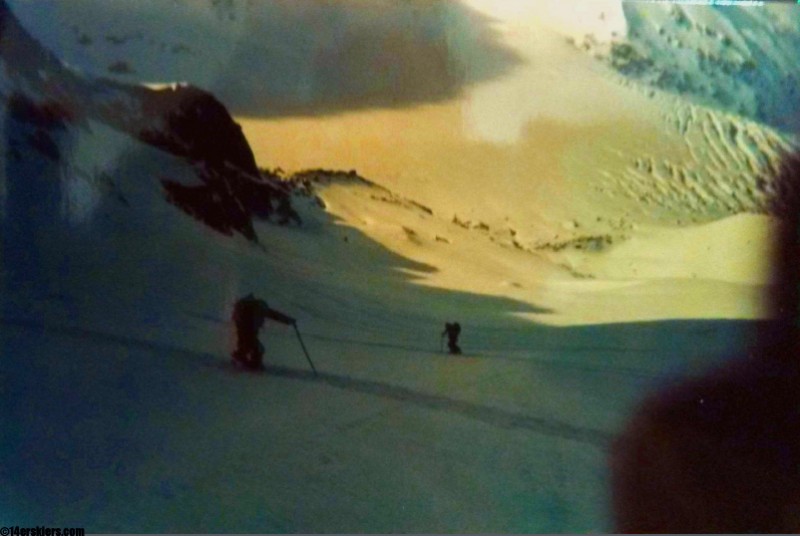 And we skied to Italy (Courmayeur): 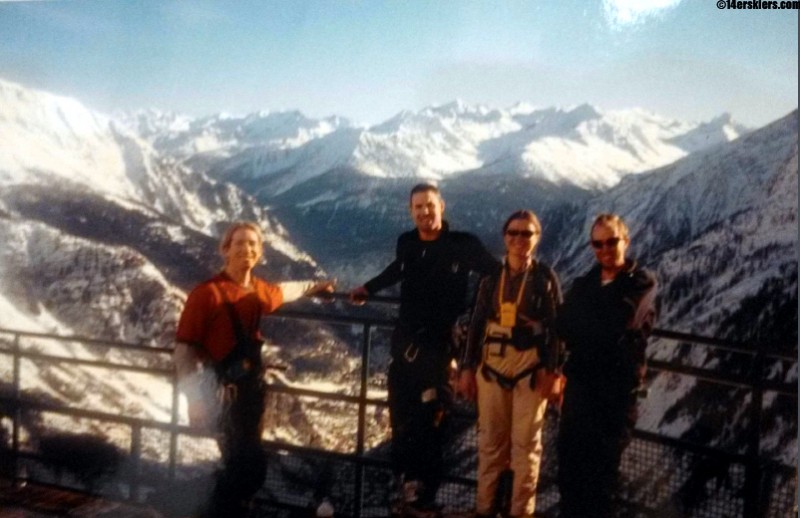 It was good; I skied a lot of the things I really wanted to ski, made a lot of lasting friendships, and experienced Europe for the first time. On the last day, Kirsty and I got a chance to ski Rectiligne, a steep, straight, and narrow run accessed from Grand Montets that we’d been ogling the whole time we were there. 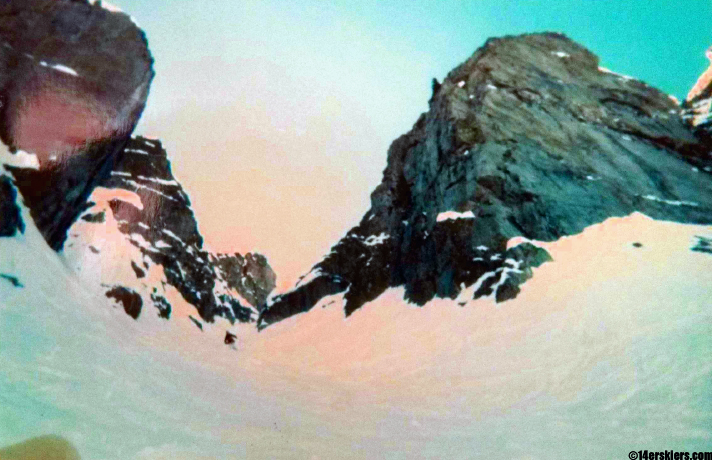 It took until this final run to finally make a mistake in a place where mistakes are easily made and the price of making mistakes can be severe. We were skiing in the sunshine, but with this kind of vertical relief, things change. We skied into a dense cloudbank and were relying on ski tracks in a place where that isn’t a good idea. Suddenly, the tracks were gone and we were in the midst of large and intimidating seracs. We went back up 50′ or so and discovered our error. One of those Seracs had given way, so the exit of Rectiligne was buried under chunks of blue ice. We hurried through and finished our run, luck was on our side that day.

Like I said, I want to go back, if not Chamonix at least Europe in general. Perhaps La Grave, or Austria, or the Dolomites. But I need to get back to Europe one of these days. I ask our readers: What’s your favorite ski trip? Where do you want to go next? If you are heading to Chamonix, you’ll need to gear up first: