Ski reviews are silly. Ok, now that I have that off my chest and have your attention, let me explain. There are just too many variables to take reviews too seriously without a big giant grain of salt. What variables am I speaking of? Well, here’s a start:

To understand this or any other review, I think it’s important to understand the reviewer and what they’re looking for. So, here’s a quick synopsis of me and my skiing taste and style. I started skiing when I was only 3, then I raced, and then I got into IFSA big-mountain comps when I moved to Crested Butte, with a couple fo years up in Canada as well (Rossland and Pemberton). Point is, I have a lot of miles under my feet, and a pretty big bag of tricks when it comes to changing my ski style to suit conditions or the ski I’m on.

These days, I enjoy backcountry skiing more than resort skiing, although all of these skis were of course skied at a resort. That might make you think that this review would be based on lightweight skis, but I find the emphasis on weight to be a sad development in the ski world. To me, lightweight skis are like a strung-out junkie, jumpy and twittery and scared of anything that crosses their path because they haven’t eaten in days and they’re emaciated and could use a few extra pounds. If you’re wondering how many grams per square inch a ski has- well, there are other websites for that. I’ll happily take a few extra minutes to get to the top, so long as I have a ski I’ll enjoy on the descent. To each their own, though, and if I was training for something like the Elk Mountain Grand Traverse, weight might be more important to me. The skis that I love can carve with ease but release the tail with equal aplomb, are very damp and stable, and have longer radius sidecuts.

My typical test run had a little bit of everything- fast groomers, sun-warmed chopped up powder, moguls (I made an effort to ski them both short and long- radius), I could find a pow turn here and there, and even a couple of steep turns at the bottom. Here are the skis I tried, in the order I tried them:

Rossignol Squad 7
190cm
145/120/126
29.5M
I had long assumed that this ski was right up my alley, and from the very first turn, I felt right at home on this ski. Going fast and laying this ski over on the groomer was a joy, but so was slowing down and letting the tail break away in the bumps. They may appear heavy, but I thought they skied light. Unfortunately that isn’t necessarily a complement, because the light tips were easily deflectable and the ski as a whole wasn’t damp at all. So in the end, I liked this ski but didn’t end up loving it. Finding a pair from last year, with a more robust tip, at a deep discount, would be a great way to go. 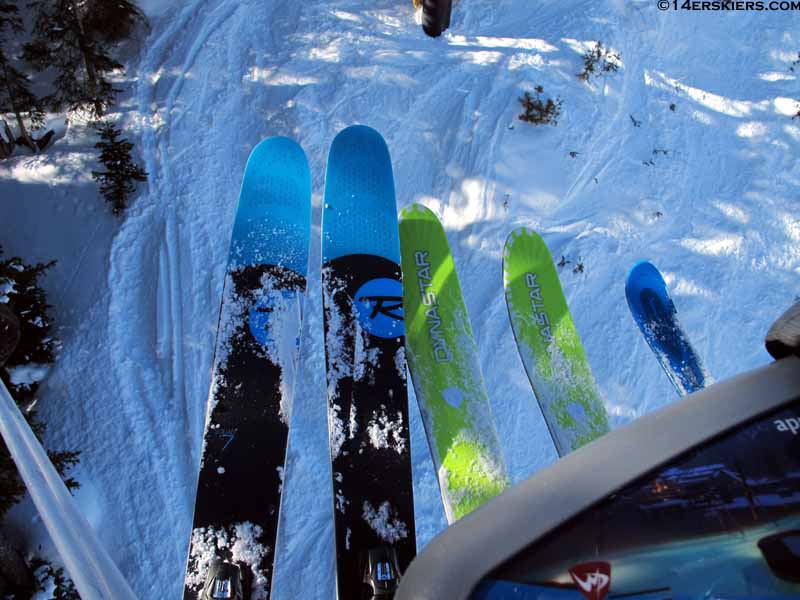 Dynastar Cham High Mountain 107
190cm
137/107/122
22M
When Dynastar unveiled the Cham ski, it was another one that I was instantly attracted to. The flat, straight tail, medium sidecut, and traditional construction all said that this was a ski I’d like. I decided to try the lighter “Mountain” model rather than the regular one in the hopes that it would be a tad more forgiving, since Dynastars are often unforgiving. Unlike the Rossi, I never felt confident on this ski- in fact, I never even carved a high-speed GS turn because i was so frightened of this skis’s hooky nature. The “sweet spot” (the point of balance where the ski is most comfortable turning) on this ski isn’t forward or centered- it’s way in the back, perhaps due to the extremely stiff tail. This ski has its fans, but I’ve spoken with several other people who had the same hooky-tail-backseat-sweet spot syndrome that I felt. In short, this was my least favorite ski of the day. 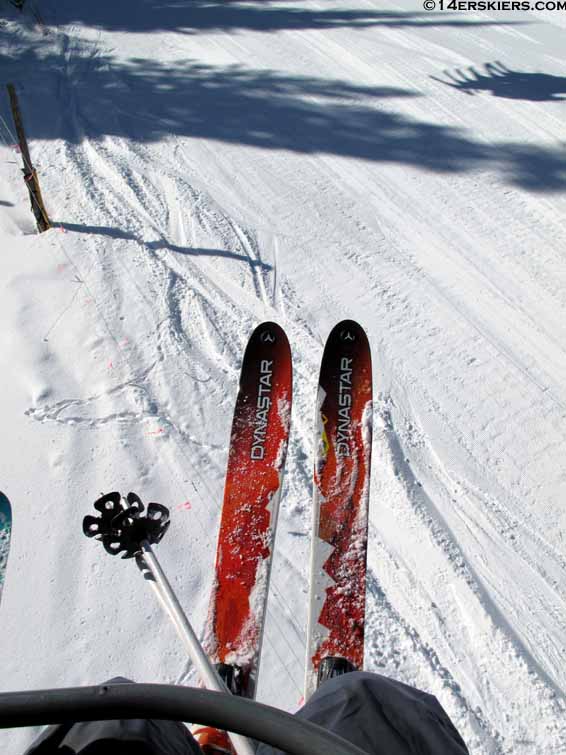 Black Diamond Zealot
180cm
135/110/123
27M
My past experiences with BD skis has been lukewarm at best. I had one of the first Verdict models, and I started calling that ski the Rotini, since I’m pretty sure that if someone grabbed the tip and another one grabbed the tail, you could twist the ski into a helix that would make Watson and Crick proud. This seemed to be a common complaint for BD skis. Next year, however, BD skis will be made in their new Chinese factory and while I have no love for China, it’s undeniable that their skis are much improved. It was stable when it was skied fast, it was still fun when it was slow, it was stable and damp- favorite ski of the day. 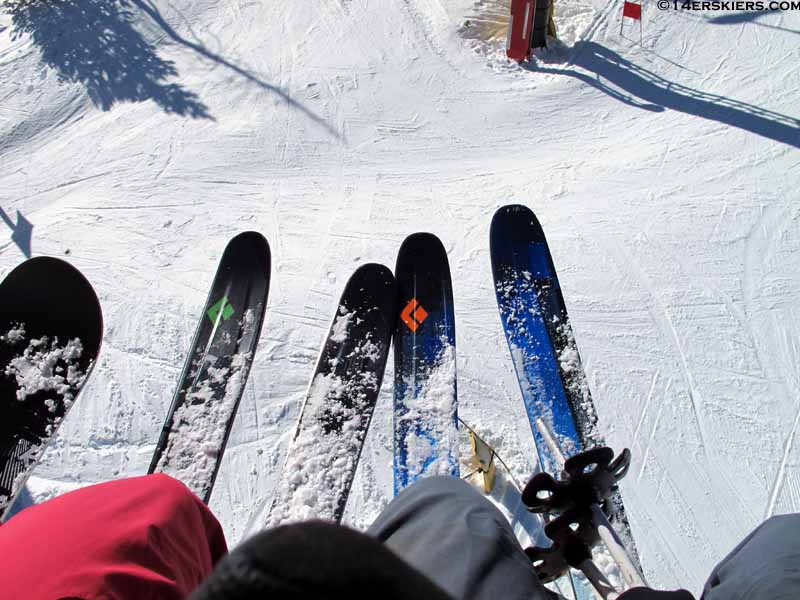 Black Diamond Megawatt
180cm
150/125/131
35M
First off, read what I wrote above regarding BD skis and their new construction. Now, keep in mind that I wasn’t skiing the Megawatt in its intended conditions (powder). Now digest this: I loved this ski. People have this crazy notion that you can’t carve on a ski this big, but you know what?- this ski flat-out rails. In what little unskied snow I could scrounge up- the ski felt as nice as you might expect. 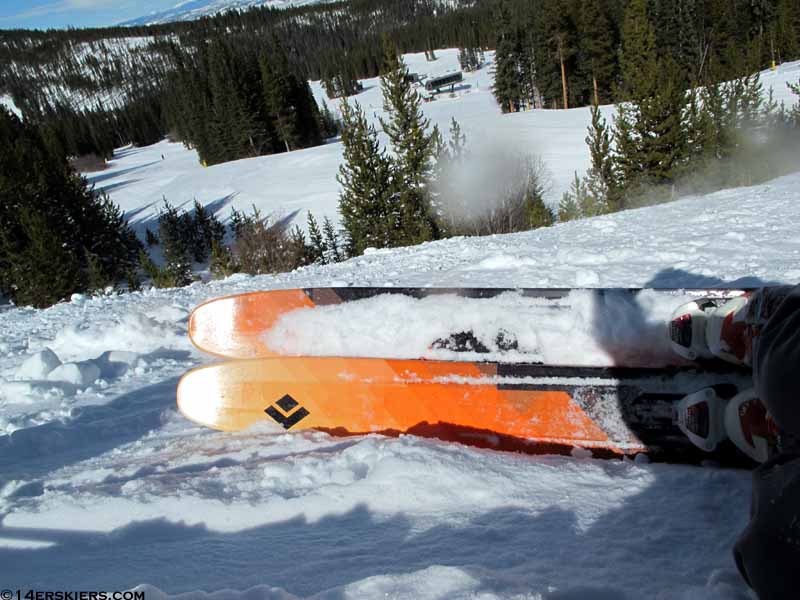 4FRNT Hoji
187cm
130/112/121
30M
This ski was one of the most radically different skis than those I’m used to that I skied on test day, with pronounced reverse camber. Mostly, I skied it because there is a bit of a buzz about the ski. Or is it just a buzz about its namesake, Eric “Hoji” Hjorleifson? This ski took longer than most to figure out- but it was surprisingly fun to carve 9though twitchy) and did well in the bumps- as long as the speeds were slow. Trying to GS through bumps, on the other hand, was downright scary. What this ski really wanted to do, though, was hop and jump around- it was extremely poppy. If you’re old like me, you may remember the game Q*bert, which is probably the best description of the ski I could give. In the end, it wasn’t my cup of tea, but I could see how someone looking for a lively and poppy ski could enjoy it. 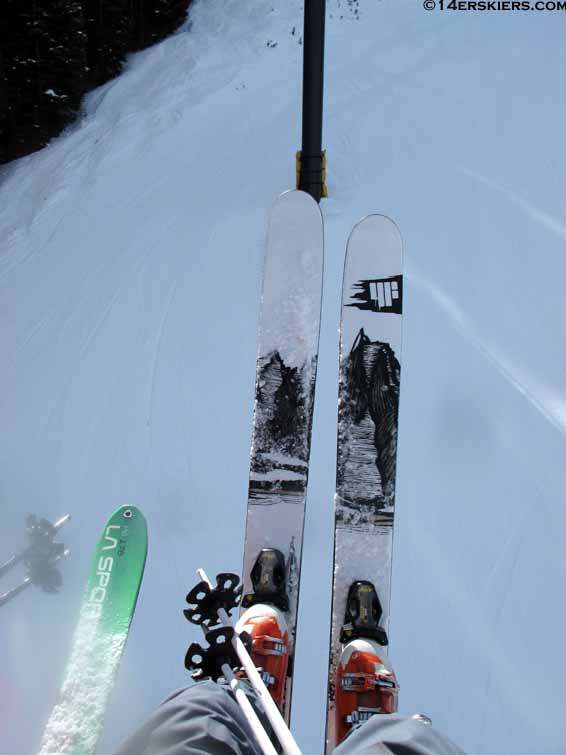 Kastle FX104
184cm
133/104/123
26M
As I mentioned in the opening paragraphs, there are several factors that can skew a ski review, and the tune is one of them. If I was grading the Kastle, I’d have to give it an “I” for Incomplete. I’m not one to talk about half degrees of bevel at the ski shop, but I still know a bad tune when I see it. This ski desperately needed a de-tune at the tip and tail, and felt downright railed. So I hated it, but perhaps with a decent tune, I’d change my… tune. 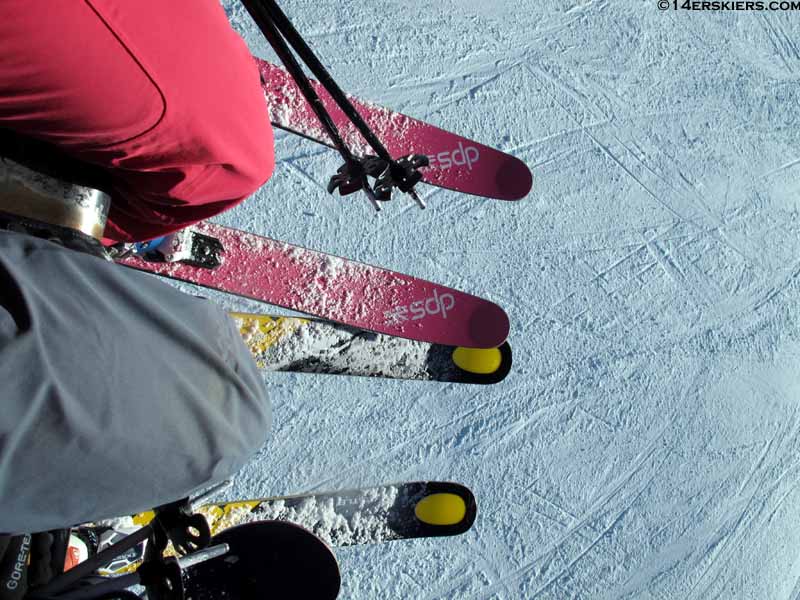 Faction Candide 3.0
183cm
142/112/132
25M
Like the Hoji, I checked this ski out (with a flat camber underfoot and reverse at the tip and tail) with a mind to expand my horizons from my usual suspects. Much like the Hoji, the ski was playful and poppy- but those aren’t adjectives I give to skis I like. On the groomer, even an old Spatula inspires more confidence than the 3.0. All of that said, this is the one ski that I never adjusted my style enough to “figure out”. It’s the one ski I wouldn’t mind taking out for a full day so I could give a more thorough review. 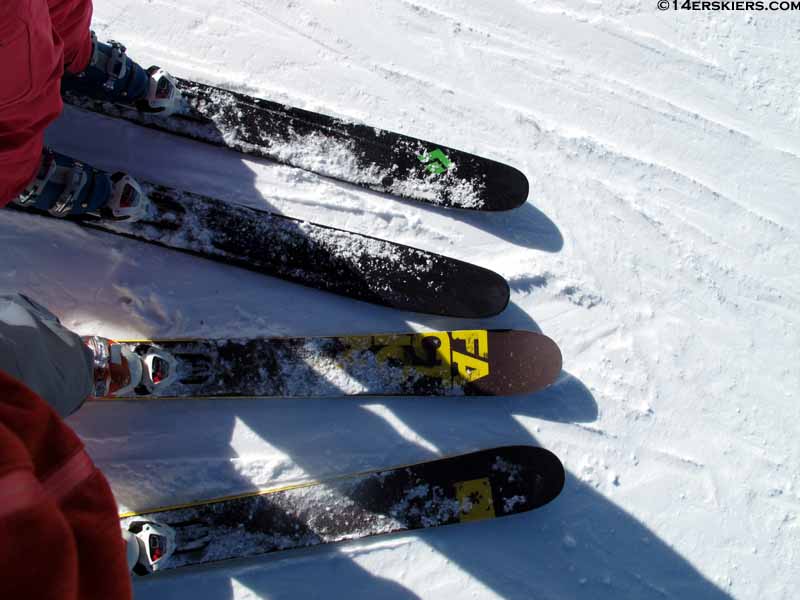 Blizzard Scout
185cm
134/108/122
27M
The Scout is more or less the popular Cochise ski, minus the metal, making it both lighter for the backcountry and/or potentially better for lighter skiers. I really wanted to ski this ski, but I also really wanted to ski on Scarpa’s new Freedom boot (review coming soon). What this means is that I was skiing the Scout not only on an unfamiliar boot, but also on Dynafit bindings, which due to their lack of elasticity will make for a tough ski experience in-bounds. I mention all this because it was hard to differentiate the feedback I was getting from the ski vs. the binding vs. the boot. Still, this is a ski I think I would be happy to have in the quiver. Though it didn’t excel at anything as far as I could tell, it didn’t have any glaring weaknesses, either. It would be another great ski to spend more time on- with my own gear. 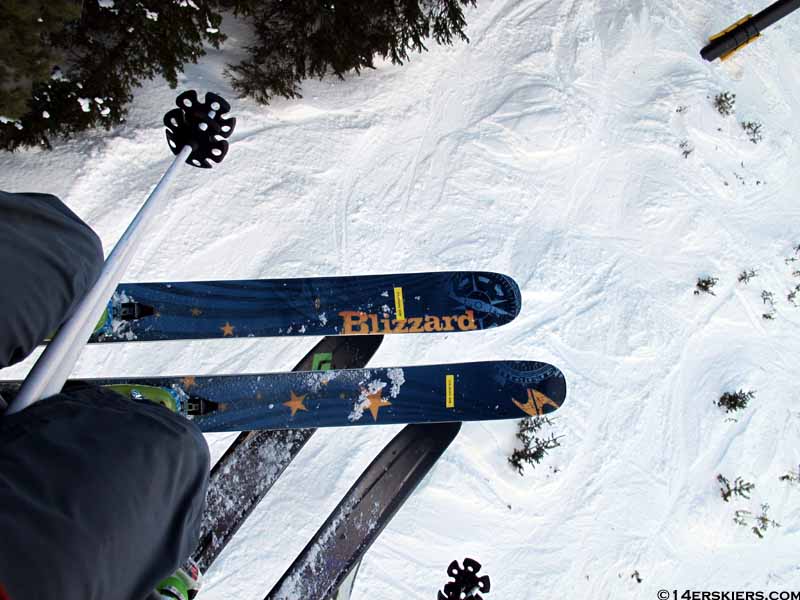 Brittany’s take on the skis she tested can be found HERE.
Please note that not all of the following links are for 2013/14 models: