At the trailhead for Garnet Canyon after our ski descent of the Middle Teton, I told Jordan and Andy that I was probably done skiing for the year unless I took a trip up to Rainier or somewhere else other than Colorado, since the dust layer had pretty much killed my ski enthusiasm. But when I got back, the mountains actually looked white again, the result of some small snowstorms that came through over the Memorial day weekend. It looked like it could actually be decent skiing, and a few trip reports on the internet made it look pretty good, too. With lows forecast in the upper 20’s Saturday night and hopefully a window of good weather Sunday morning, I pulled Ice Mountain out of my memory banks as a good objective.

Sitting just 49′ shy of the magical 14,000′ mark, Ice mountain is the highest peak in the center of the “Three Apostles”, a rugged group of peaks in the middle of the otherwise mostly boring Sawatch Range. (This photo and other small photos Tom Runcie) 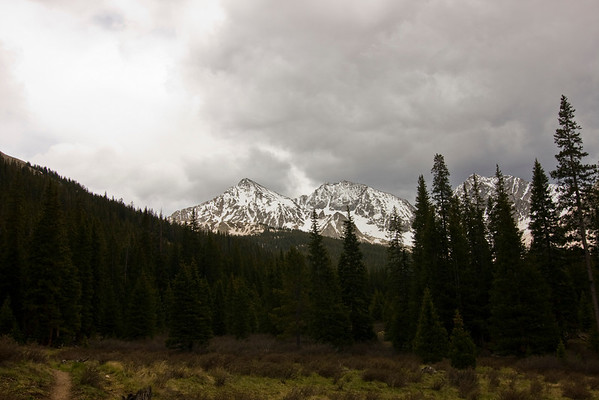 Tom and I left Crested Butte at 4am for the drive over Cottonwood Pass and reached the trailhead a little later than we wanted to, but were still hiking by 7:15am. It had been a while since I had seen this much frost, so we knew we had gotten the freeze we were hoping for. A surprising number of tracks made their way through the snow patches and downed timber towards the base of the Apostles, which made our morning much easier. This icy log was the crux of the approach: 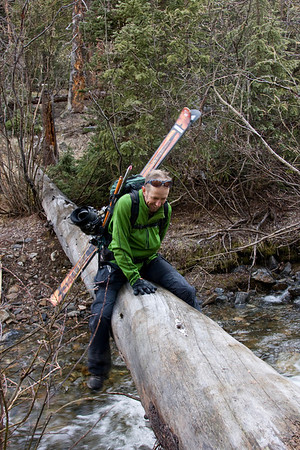 We saw a group high in the basin about to enter the couloir, and followed tracks right through the tiny couloir that makes its’ way through the lower cliff band in the lower right of this photo.

Some people have claimed that this couloir reaches 65degrees near the top (I’d say maybe 50, with most of it at 45), and others have called this couloir one of the most dangerous routes in CO due to rockfall. The snow apron at the bottom of the couloir had virtually no rocks on it, and we only saw one rock falling down during our climb, so perhaps the warnings are a bit exaggerated. Tom on the fun climb:

We topped out the couloir and then made the short and easy scramble to the summit. Clouds had been gathering and there was some rain over Taylor Park:

There was enough snow to ski right off the summit through a few rocks and over to the top of the couloir. The refrigerator couloir, high and North facing, was in great shape for the last day of May. New snow had covered the dusty snow, and it hadn’t slid so the surface was nice and smooth. Our timing, around 11:30, was perfect and this route yielded some of the best corn of the year. 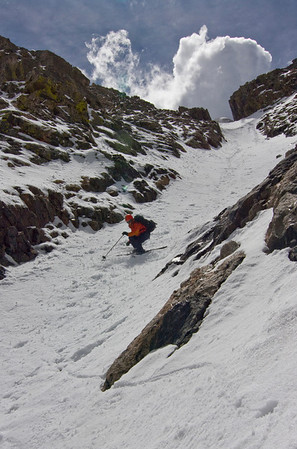 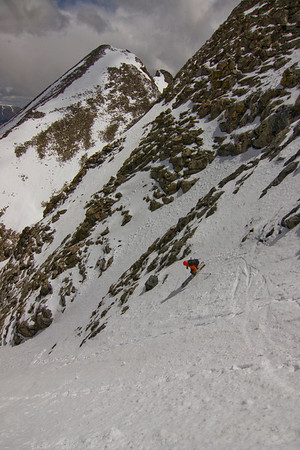 West Apostle did its’ best to mimic a Teton peak, making me imagine someone linking all the little snow patches on this face via a series of rappels, as they like to do in the Tetons.

The tiny exit couloir was fun and interesting as well, with some slimy little moves to negotiate a couple of sections that were too narrow for skis.

All that was left now was to race the ever-building clouds back to the trailhead, while still pausing to look back at the peaks:

The rain started to come down hard about 5 minutes after we reached the truck. Looks like our timing was perfect all day long. On our way back over Cottonwood, we drove through 3-4″ of new snow, so Ice and the other high peaks in this area might be skiing very well for the next few days at least. It looks like the season isn’t quite done afterall, dust or no dust.