Brittany’s spring break was last week, and with the Colorado snowpack currently pegged at 39% of average and the Gunnison Basin at 47%, it was pretty clear we should go somewhere that got a little more snow. The Tetons didn’t exactly get hammered with snow this season either, but it was still the best and closest destination for us to eke out at least a few worthwhile descents this spring. Josh Macak was in town and equally keen on a road trip, and meanwhile Jordan White and Anton Sponar headed up from Aspen as well.

The weather forecast wasn’t perfect later in the week, so we decided to jump right into things and go after the big objective- The Grand. Jordan and I had already tried the Grand back in 2009, but in the end we wandered around in thick fog and sleet in upper Garnet canyon before mistakenly summiting Middle Teton. A midnight alarm clock had us leaving the Bradley/Taggart trailhead around 1am, where there was just barely enough snow to skin right from the trailhead.

After a long drive and only a little sleep, with thoughts of a big climb weighing on our minds, we all retreated into our own heads and zombie-walked through the rolling terrain to the base of Garnet canyon. I’m sure many of you reading this know exactly what I’m talking about when it comes to these surreal dark’o’clock experiences. It looks a bit like this: 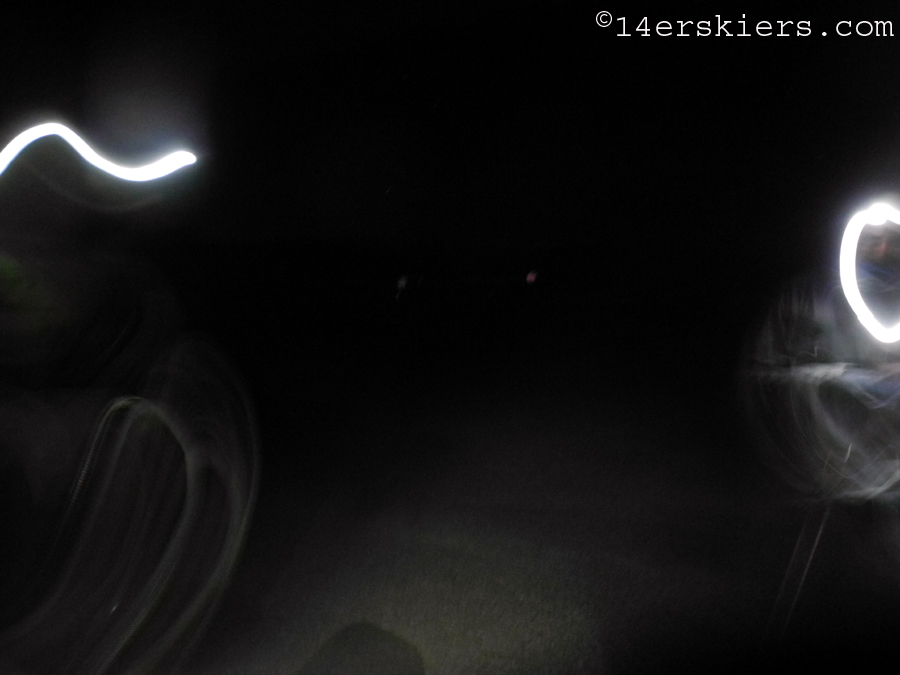 It was still dark when we made the turn into the N fork of Garnet canyon, the turn which Jordan and I had missed the last time around. Finally we started to gain some easy elevation and the sun bathed the Middle Teton in an orange glow. 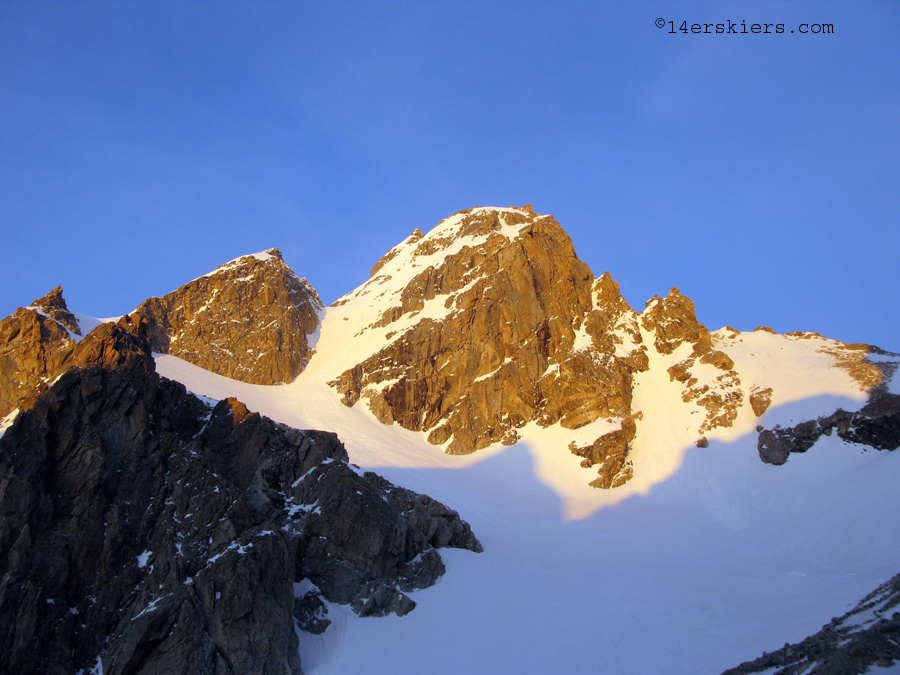 It was about this time that I realized we had once again been overeager and missed the Teepe glacier. Thankfully we hadn’t wasted much time and we made an ascending traverse up to the Teepe through the moraine. 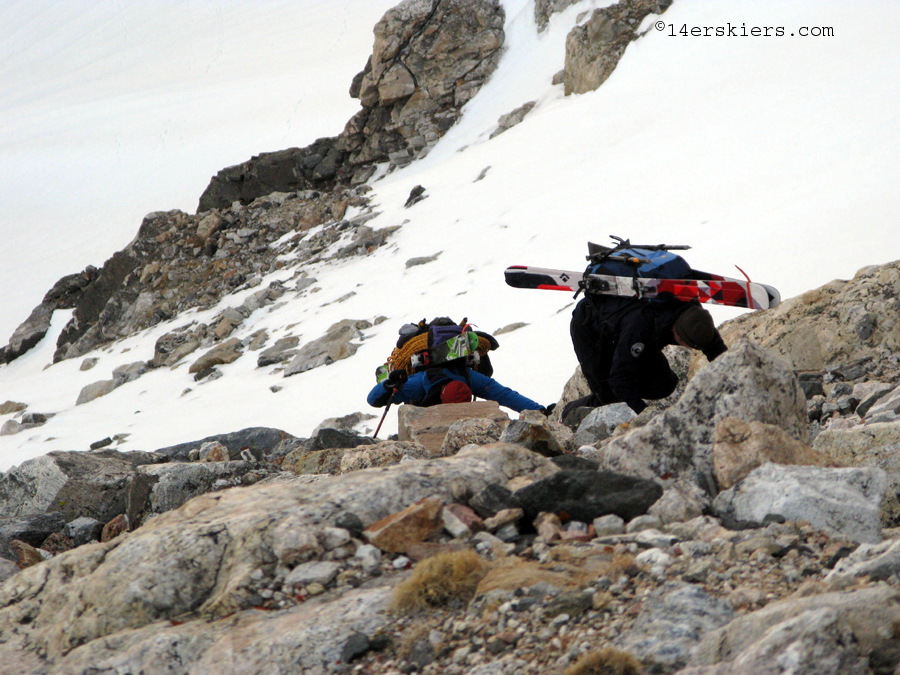 The view of the Glacier Route (East Face) of the Middle Teton kept getting better, and someone had laid down some nice tracks on it: 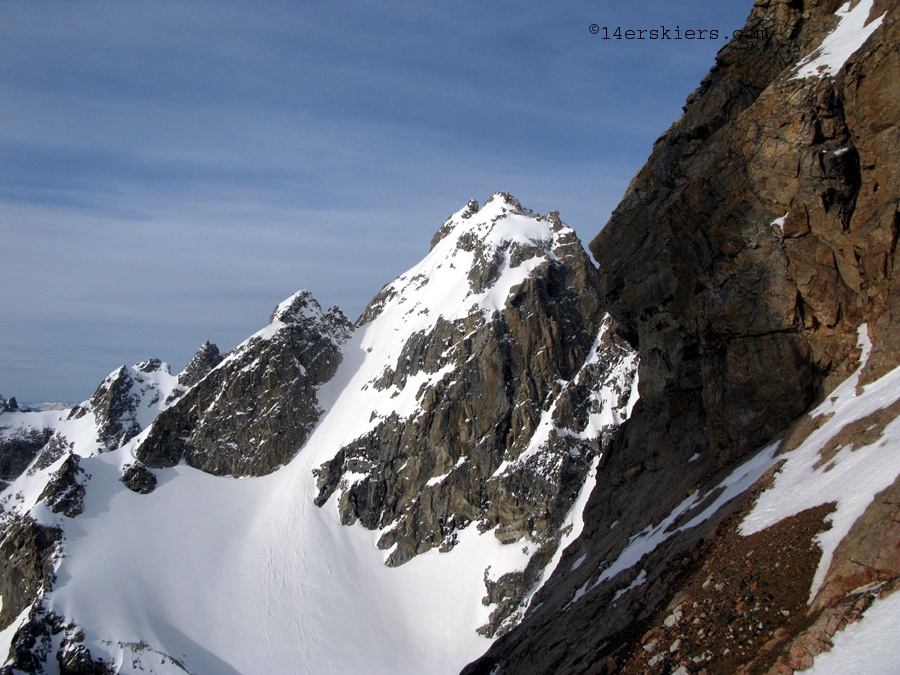 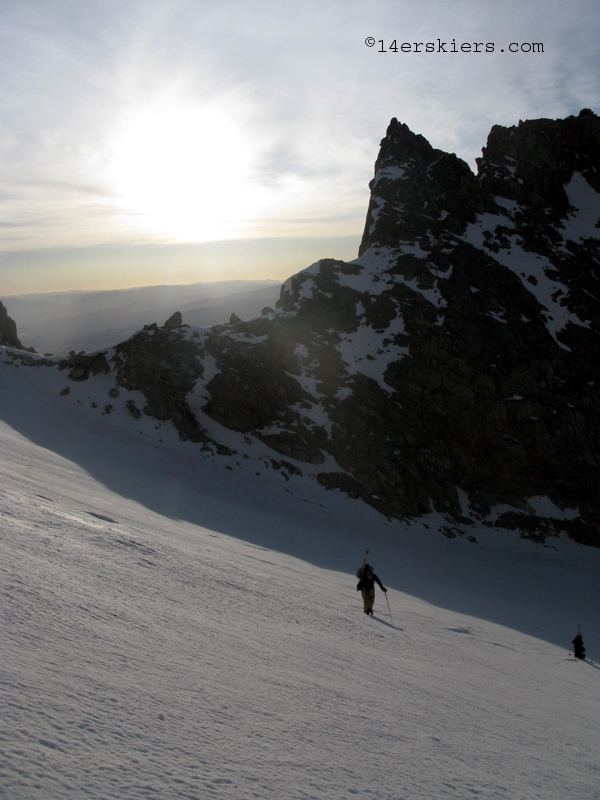 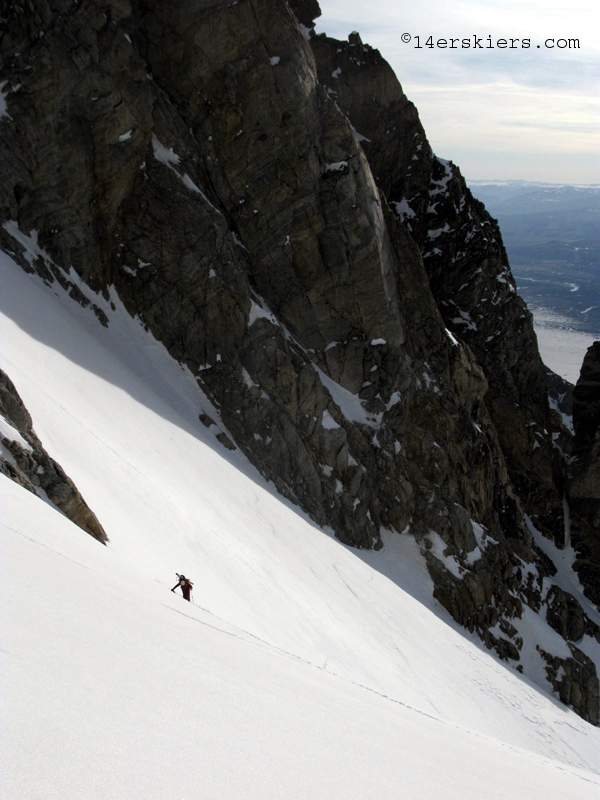 Brittany in front of the Teepe Pillar:

At this point, our large group began shrinking. Anton had been feeling a cold coming on, and midnight hiking blew it up into a full-blown cold. Brittany, meanwhile, hadn’t been feeling great either, complaining of occasional dizziness thanks to the lack of sleep. So we said goodbye at the top of the Teepe glacier and Josh, Jordan and I continued on, quickly reaching the bottom of the Stettner couloir and Glencoe col. The “real” climbing starts quickly at this point. Jordan: 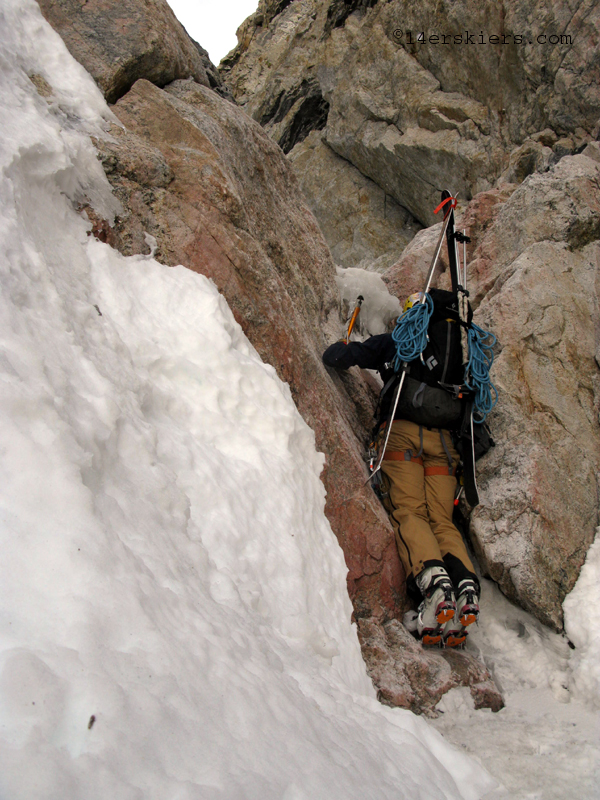 Not far above this pitch was the first rap/belay station. Since it was dangling 12-15′ above Jordan’s 6’4″ frame, it was pretty obvious that the Stettner wasn’t filled in this season like it is in better seasons. Josh above the first pitch: 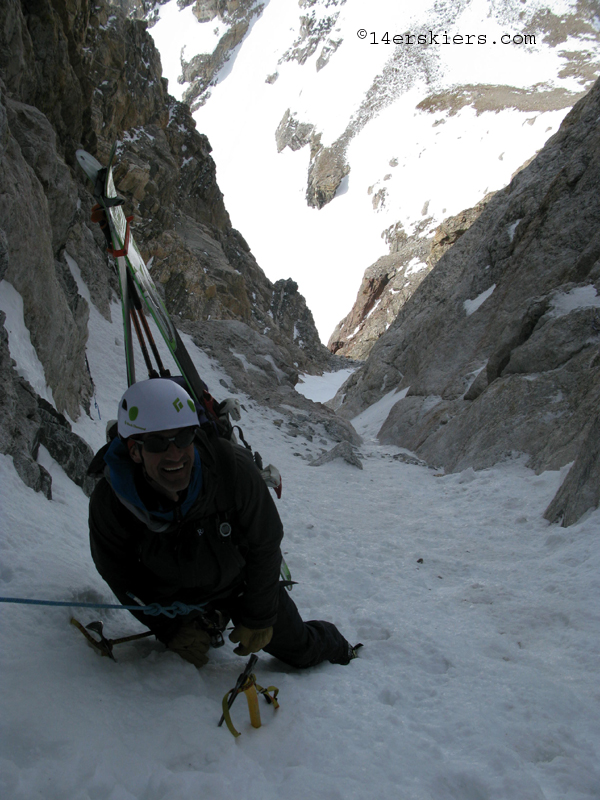 Jordan on the next pitch: 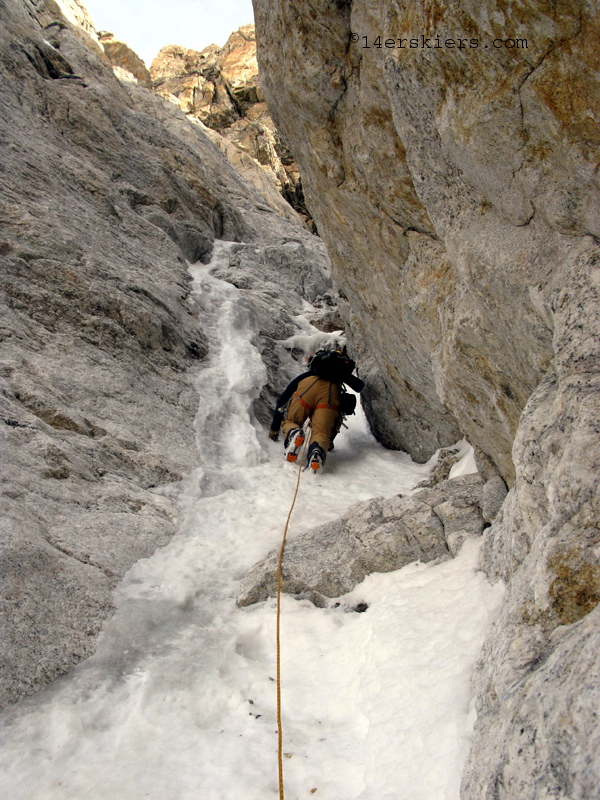 Just above this, it was clear that another route takes off to the left. Since it looked completely uninviting compared to the relatively easier terrain heading right (the Stettner), we went right. As it turns out, we may have wanted to go left as the ice bulges we were looking at are the start of the Chevy couloir that leads to the easier terrain of the Ford couloir. The Grand is a complicated mountain, and it takes a while to get it figured out. Heck, it took the late Steve Romeo 5 tries and Andrew McLean 3 to ski the Grand, so there you go. The Ford/Chevy/Stettner has become the standard on the Grand, but it should be noted that Bill Briggs’ first descent was via the Stettner without the Ford variation, so basically we were climbing the Briggs’ route.

Back to our story- we continued up the Stettner through 2 more pitches of snow, rock, and ice. We reached a point at about 12,800′ that ended up being our high point. Why did we stop and turn around? 1-It was taking too long and we were behind schedule. 2-It was really windy thanks to the incoming storm, so we were constantly getting pummeled by icy pellets blown off the upper face. 3-the wind also made us concerned that the snow wouldn’t soften. 4-The mountain seemed to say to me “Not today, boys.” The wind, the low snow conditions, etc were all talking to me. 5-This season didn’t just suck due to the lack of snow over most of the lower 48, but because a lot of people I know died. Not to get all hippy, but 2012 has a bad aura, at least for me. 6-Most everyone I know who has skied the Grand skied it in high style during high tide conditions- with just a small rap or 2. We were looking at 4 or more rappels and it just wasn’t what I wanted my Grand experience to be. As Tom Turiano writes in his book Teton Skiing, “In lesser snow years, skiers may have to make as many as five rappels, making the descent barely worth the effort.” 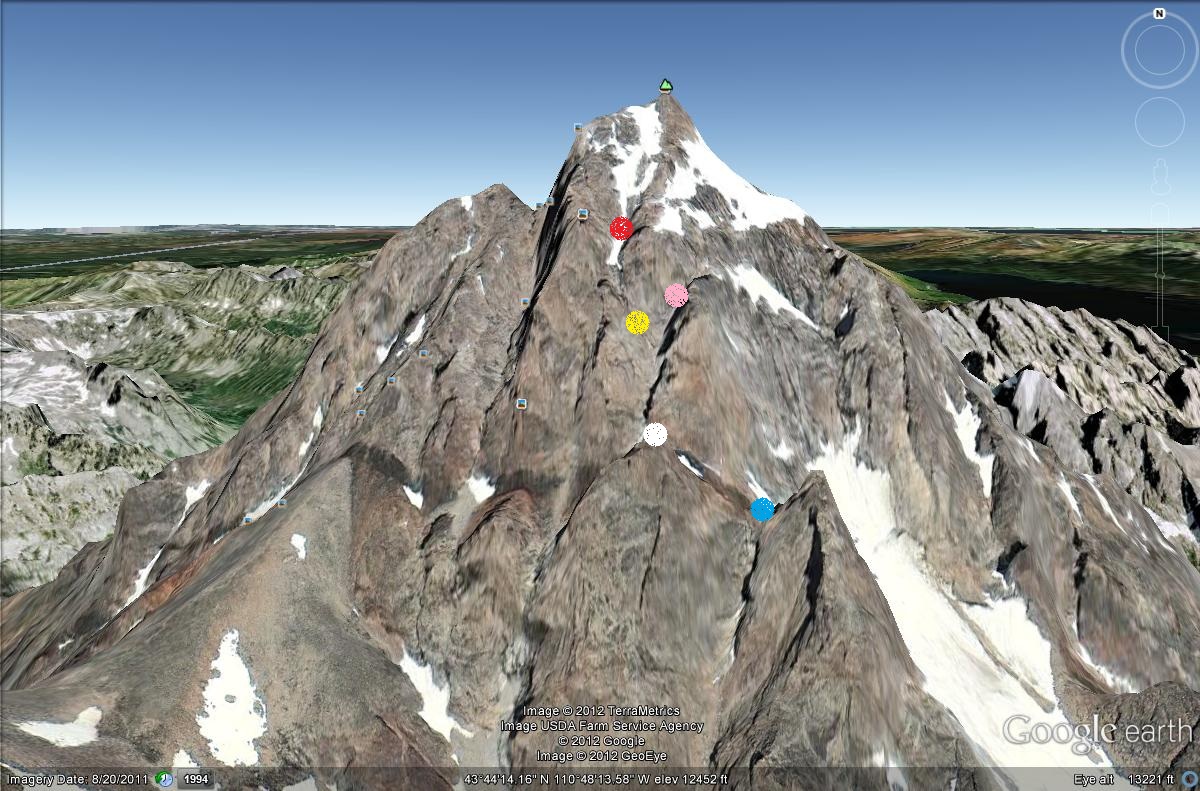 So down we went. Josh waiting to head down (don’t worry, we weren’t using the janky pieces in the foreground) 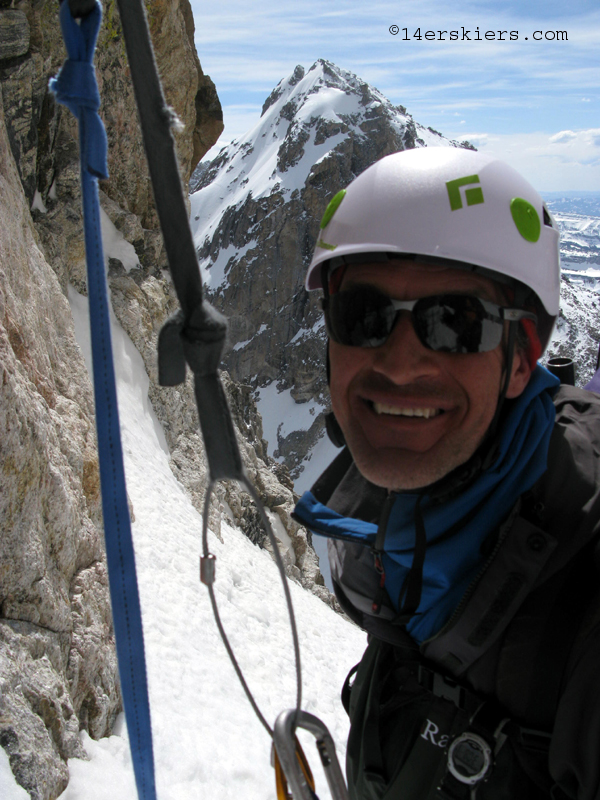 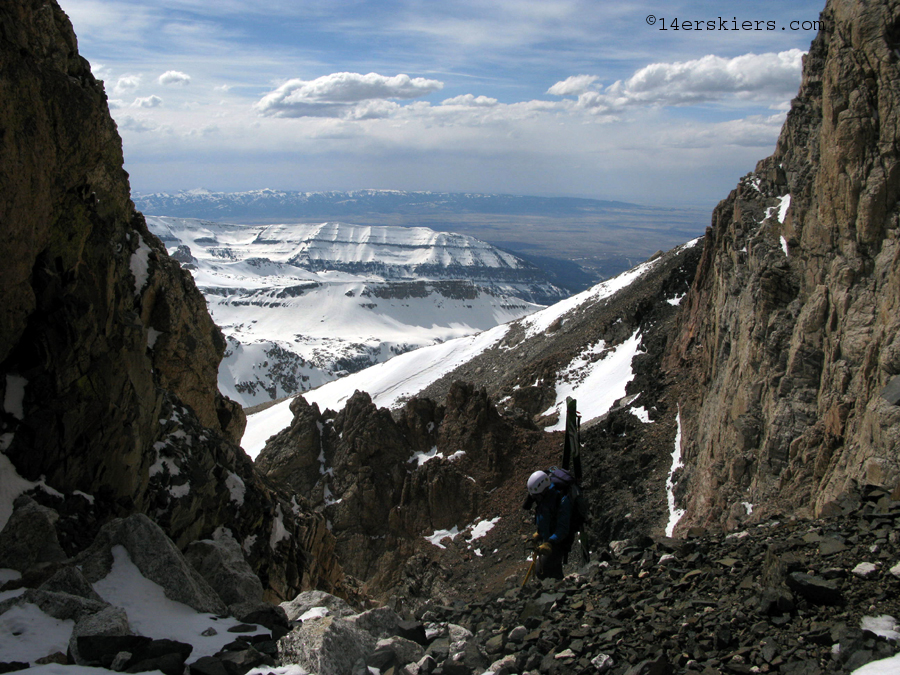 After 4 rappels/downclimbs, we were back by the Teepee Pillar, and we finally got to put our skis back on. Josh drops into the Teepe Glacier: 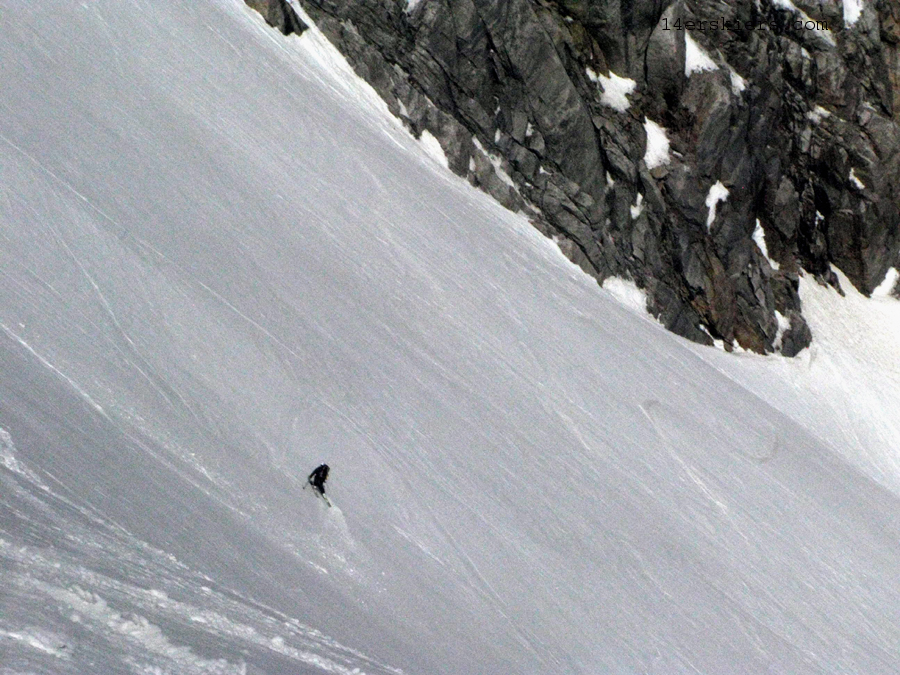 Jordan, with the Teepe Pillar behind: 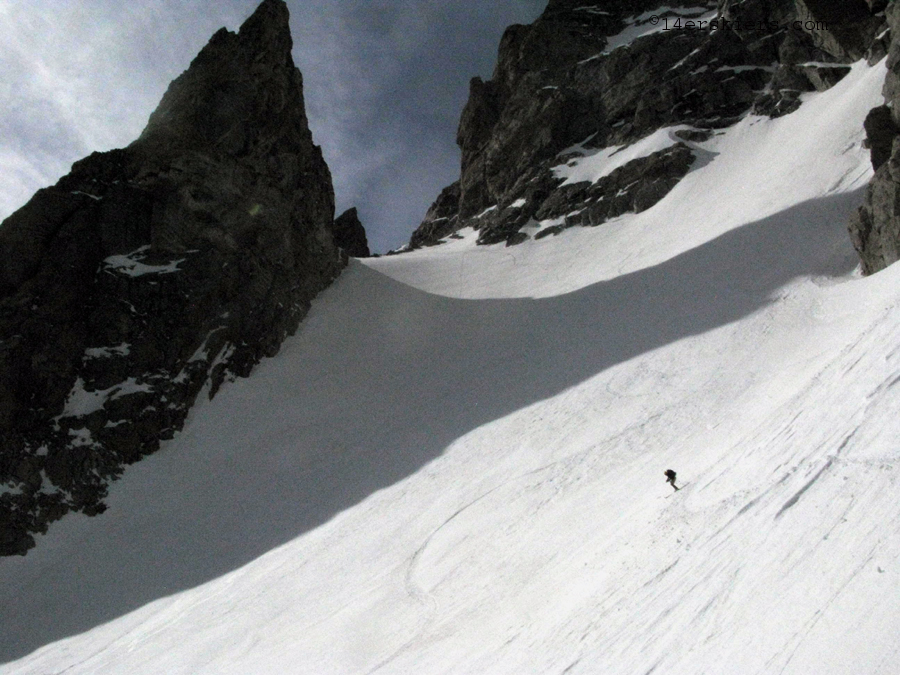 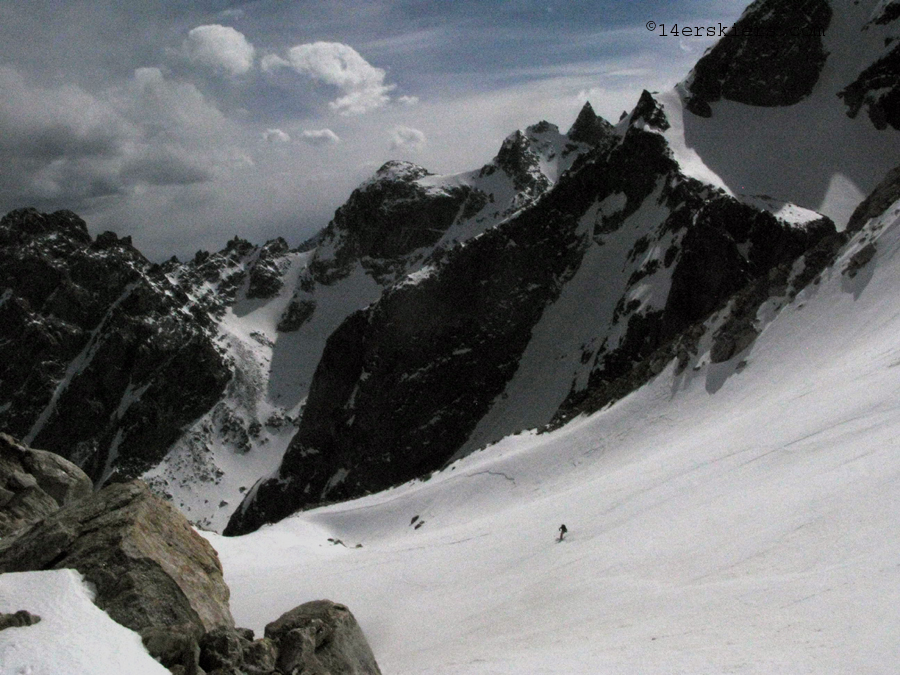 Frank. The Otter Body route can be seen above me in the first photo: 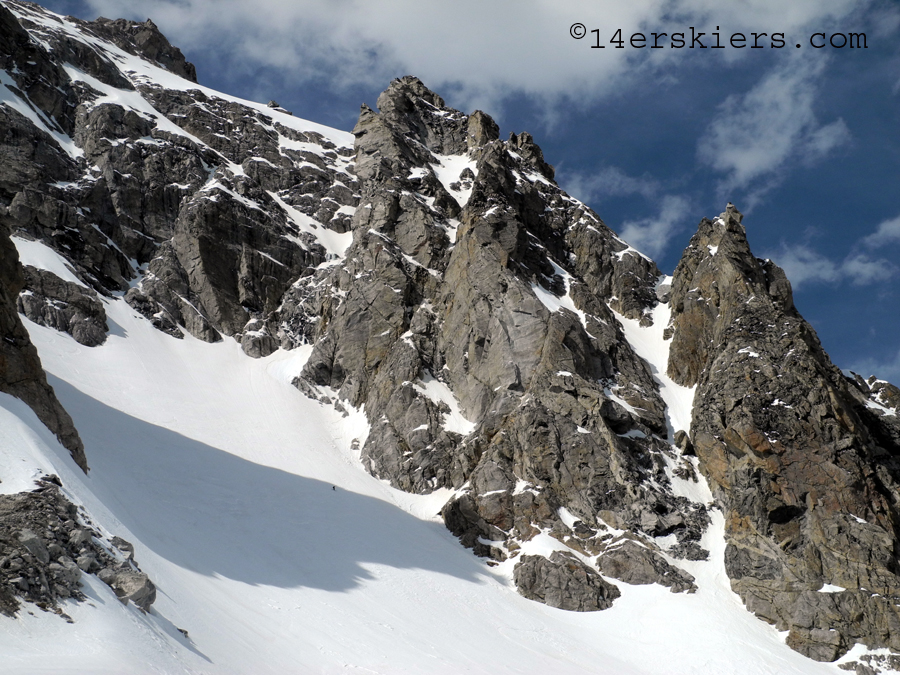 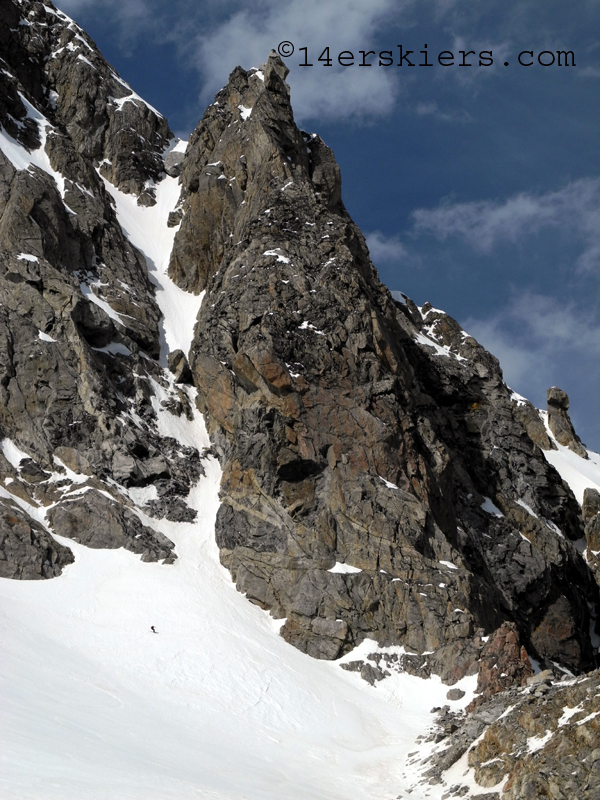 Brittany and Anton had only recently begun descending, so we caught up to them in the flats below the Teepe glacier: 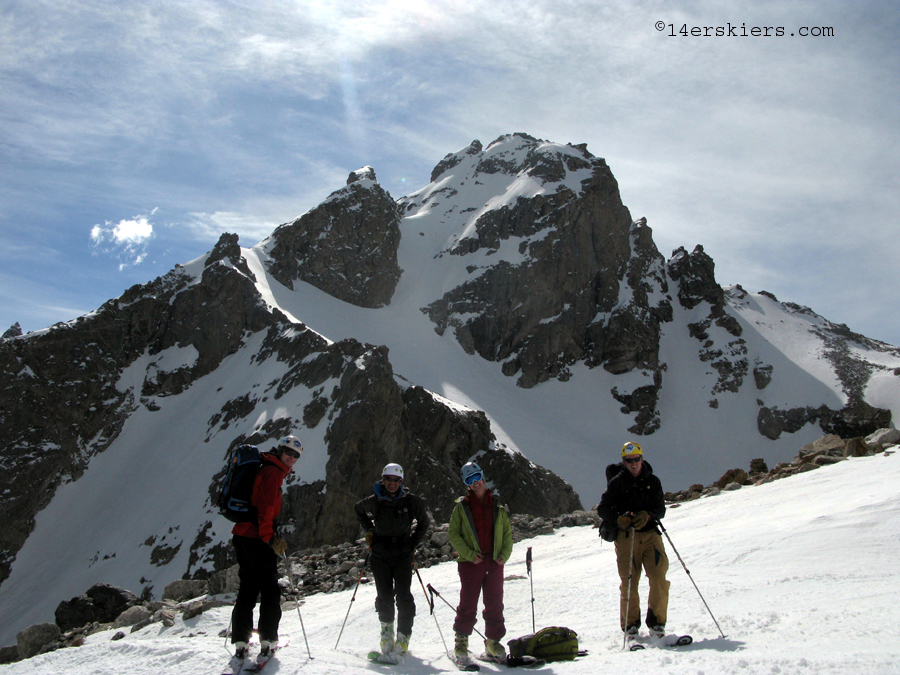 Brittany descending. There were some great turns coming out of the obvious diagonal couloir on Nez Perce behind her: 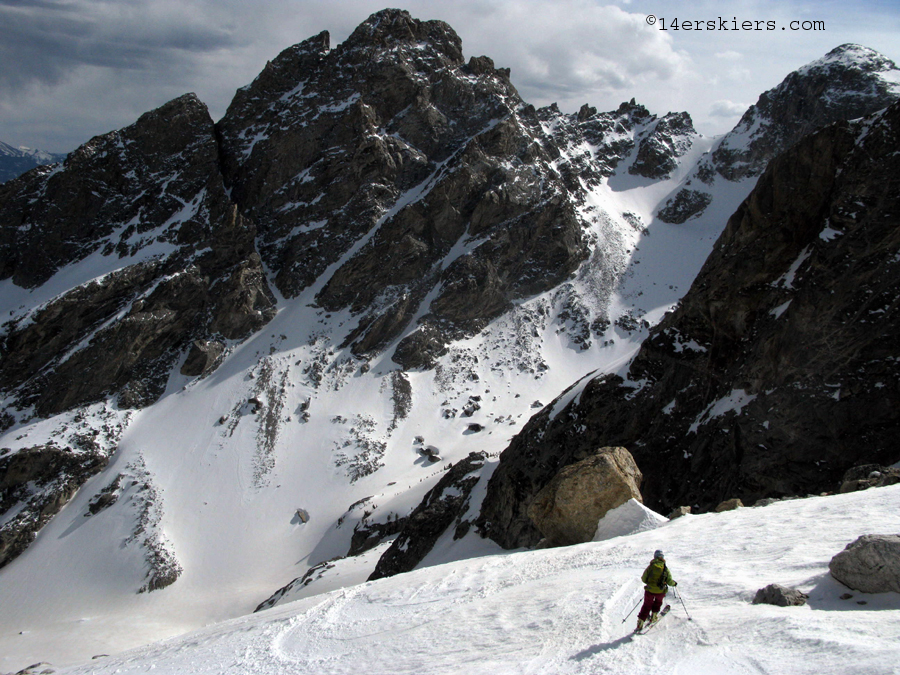 Brittany making the last steep turns before the meadows of Garnet Canyon: 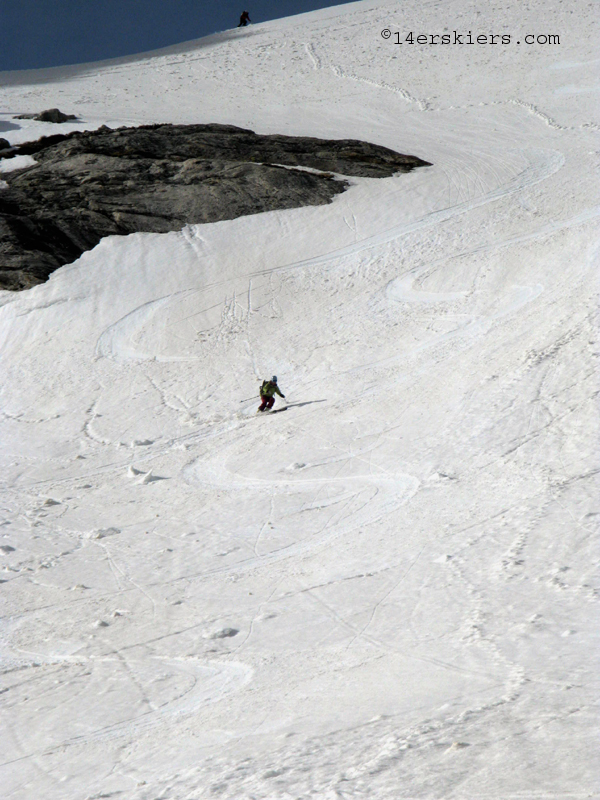 From there, it was some easy cruising down Garnett until Bradley lake, at which point getting back to the car becomes extremely tedious with small uphill sections dotting the route the rest of the way to the car. I guess the Grand is staying on the list a while longer, but it’s good to have some goals for down the road.