Time for a departure in titles from our recent straightforward title names. Spectres? Ping Pong balls? TT43, what is that code for? I’ve gone off my rocker, haven’t I? Read on…

Skiing in places like Alaska is quite the opposite of Colorado in terms of the weather you’re seeking. Here, it’s all about the high pressure letting you get out onto the big lines with blue skies and stable snow. All week long, Friday looked like it would be “The Day”. 0% chance of snow- sunny. Code Blue as they say in Canada. We’d spent enough time on Turnagain to have a few ideas for a big clear day, but in the end our “local consultant” and this Youtube video had us setting our sights on the tallest peak in the Turnagain area, TT43.

We woke up to snowy skies and a forecast which had changed overnight to a 60% chance of snow, but with afternoon clearing. While this would be cause for much celebration back in CO, we were dismayed at the new forecast but still hopeful that the sun would be shining by the time we completed the 4,000’+ climb of TT43. So up we went. 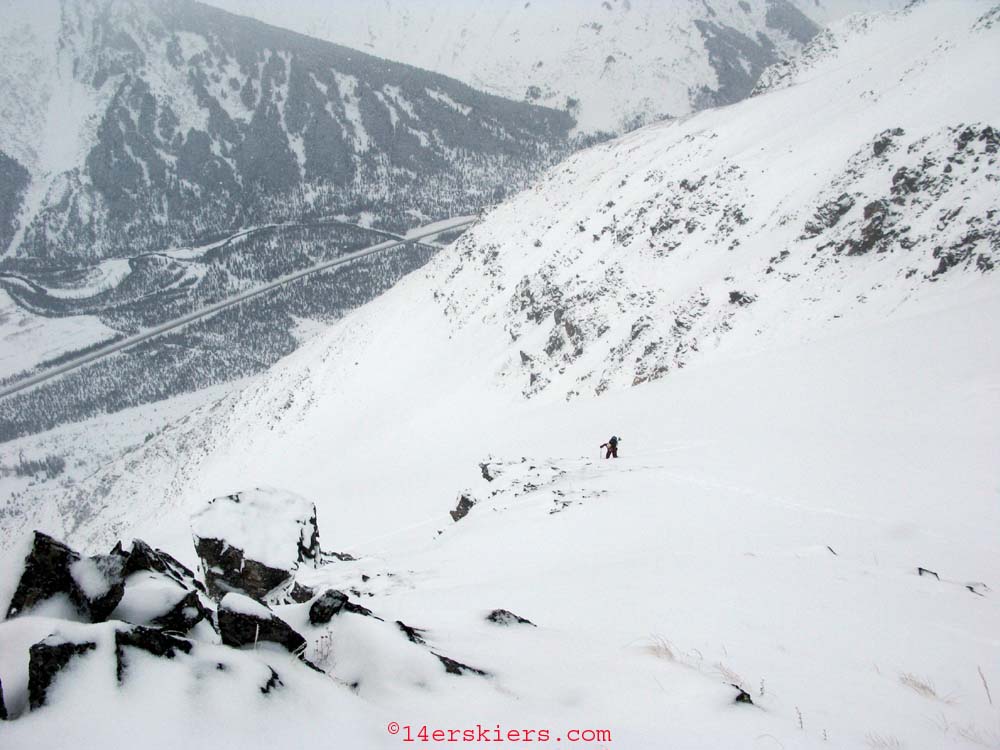 Then it got worse… 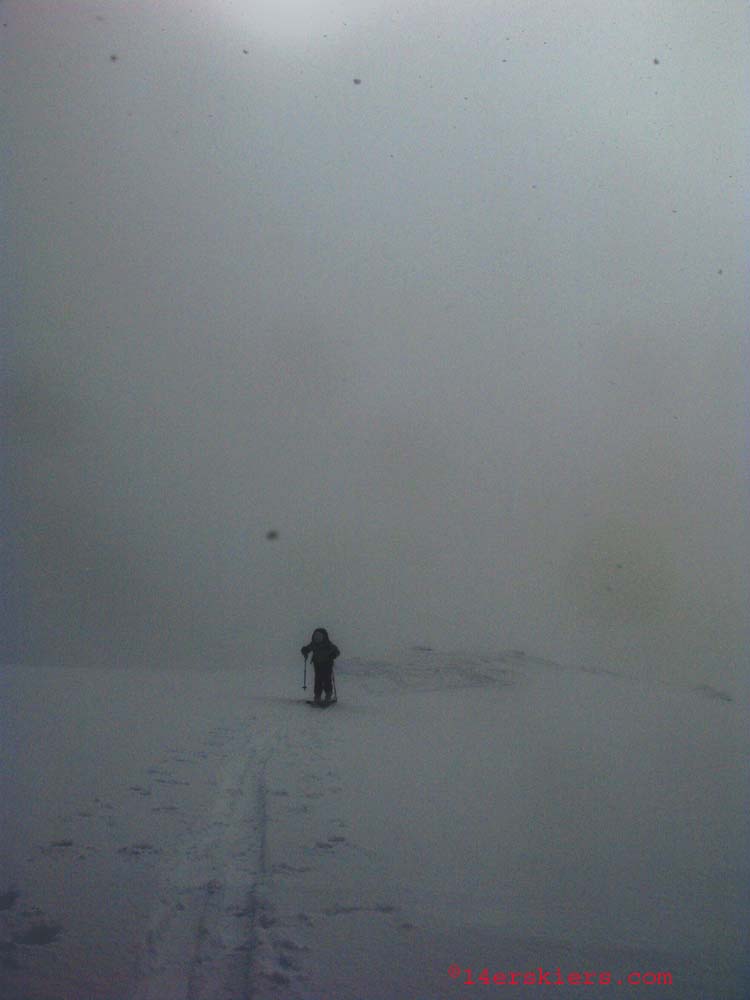 We kept climbing through the heavy clouds, hoping that the forecast was right and we would have a perfect afternoon. And indeed, the skies began to lighten as we neared the summit.

The summit… and it’s kind of, sort of, blue. 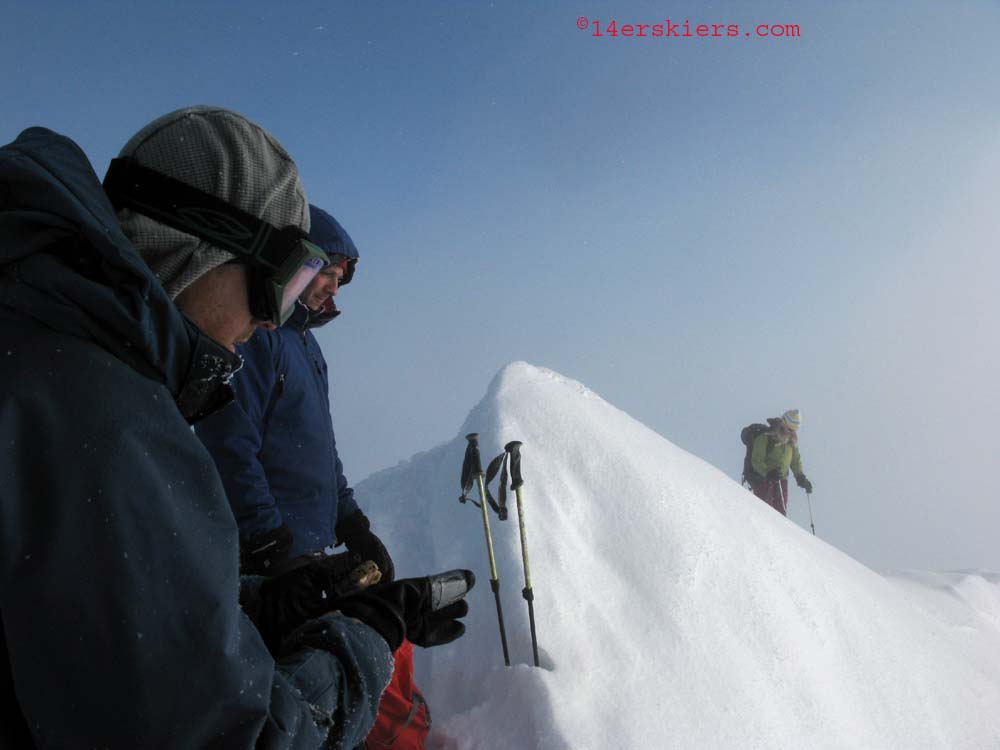 And a bit cold… 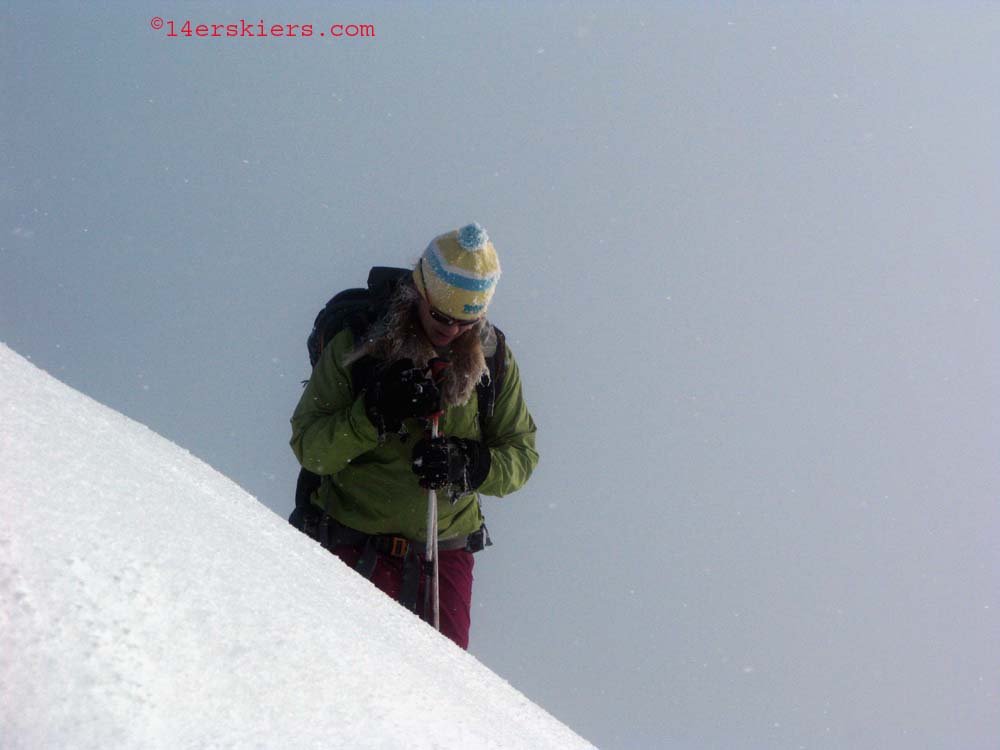 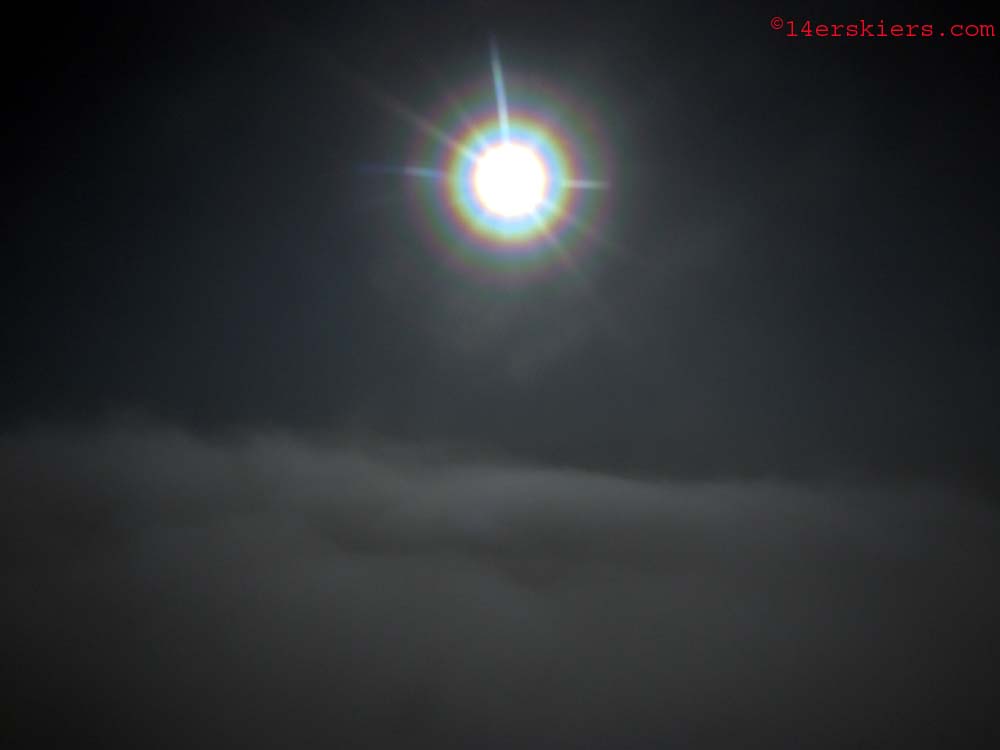 Of course, we were just above it. It was still cloudy down there. Beautiful none the less. We were on our own little island, though we could see other islands in the sea of clouds. 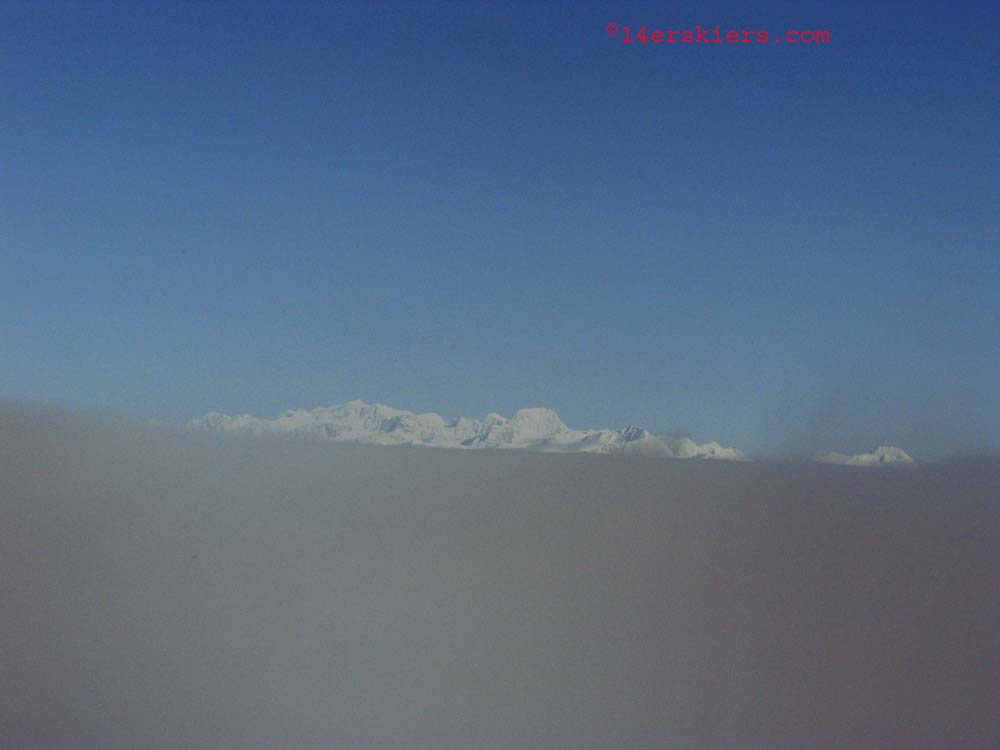 Next, we saw them. The spectres. Sometimes called Brocken spectres, this is a pretty rare occurrence when your shadow hits a cloud just right and makes a circular rainbow with your shadow at the center. I’ve experienced it before, but never to this level. Very, very cool, I have to say. 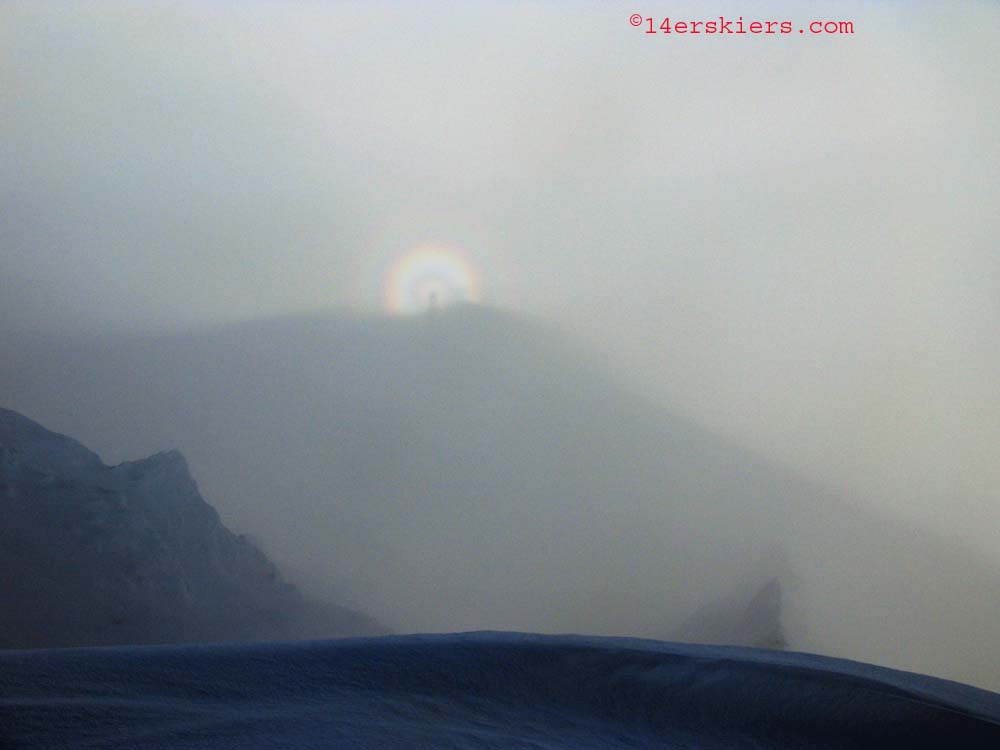 So there we were. Those first few turns looked pretty sweet, but then what? 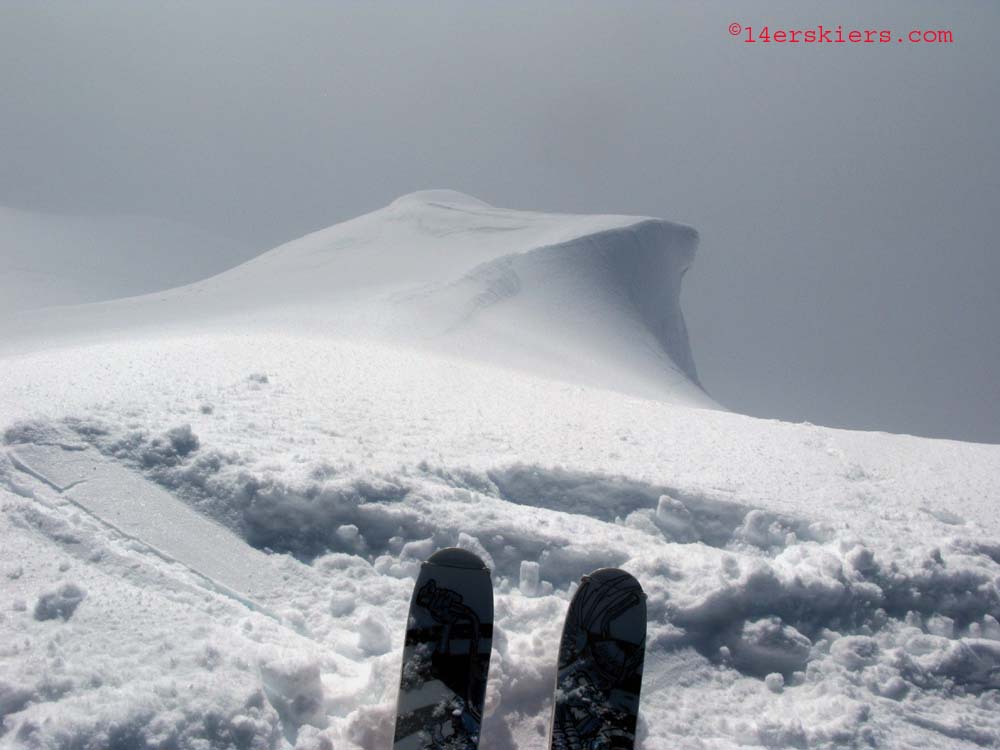 Well, maybe if we drop some cornice and hang out a bit, it will get better. 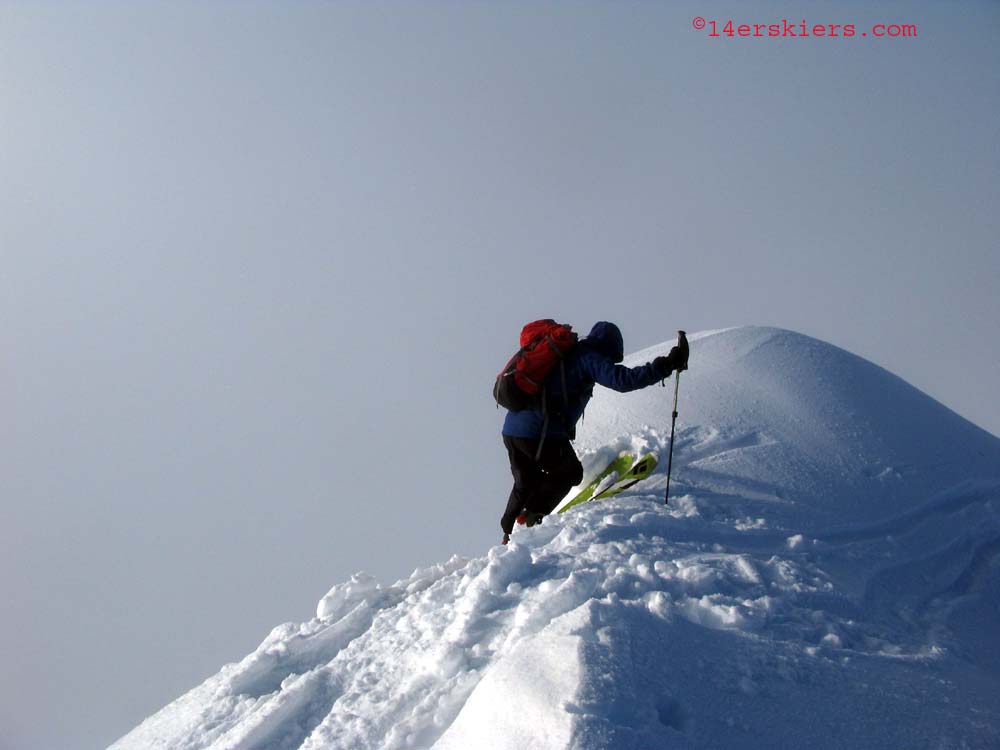 The light refused to change, and it was time to go, so we had to play our ace in the hole- namely that Dana had skied the line before. Brett, being the birthday boy, got first tracks. 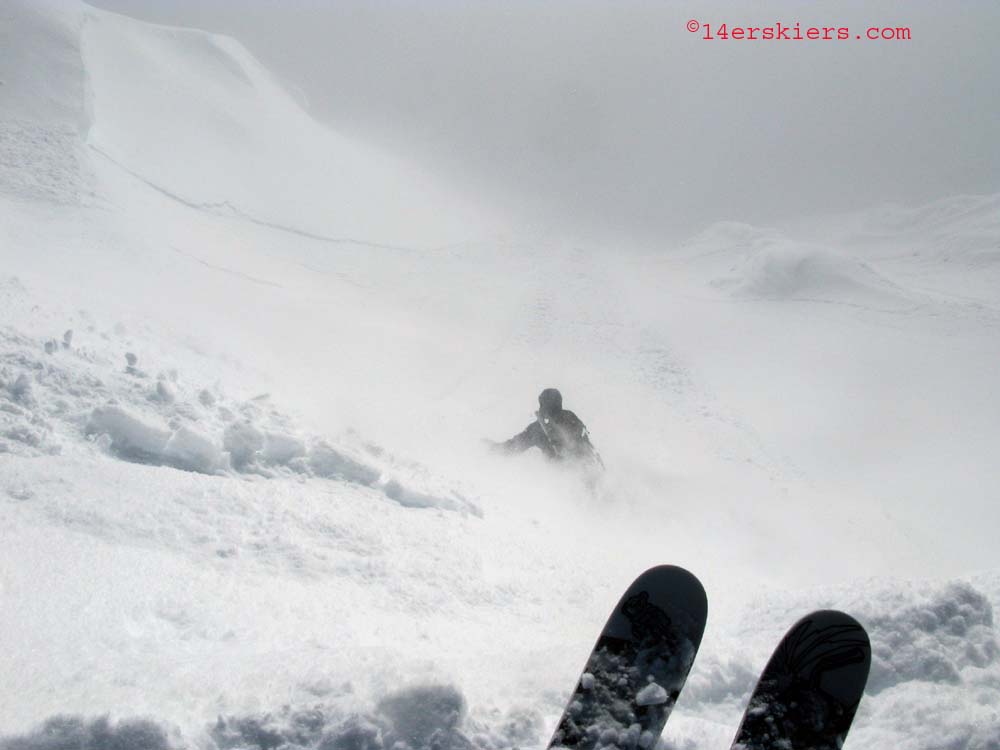 I got the next set… 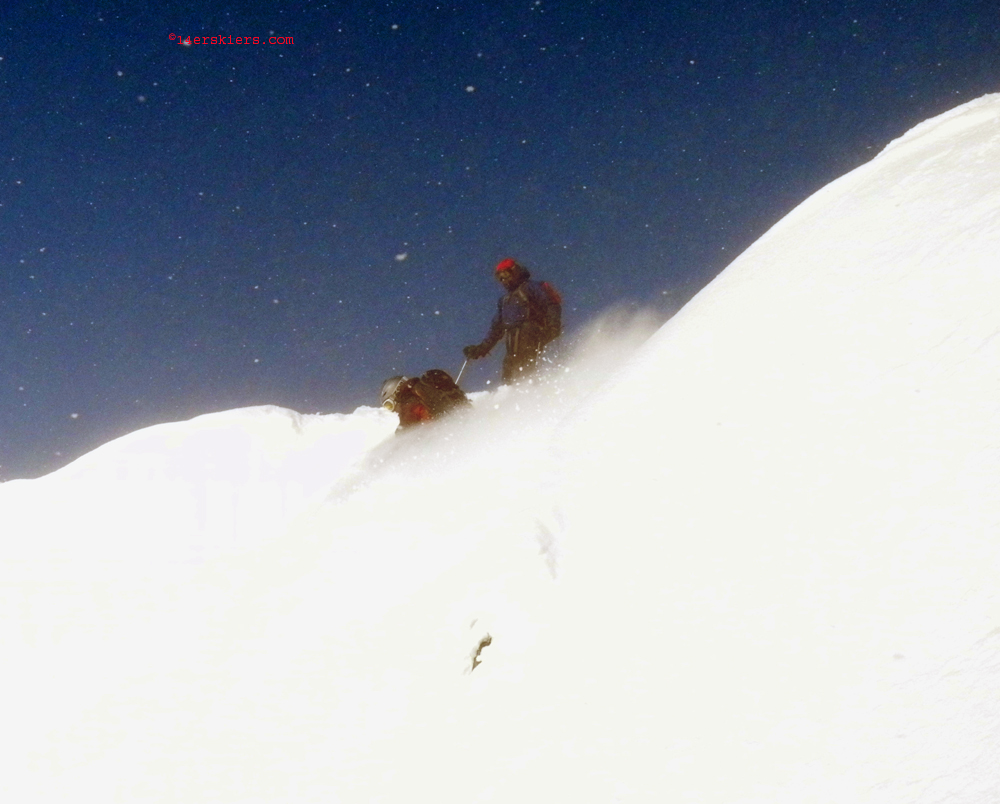 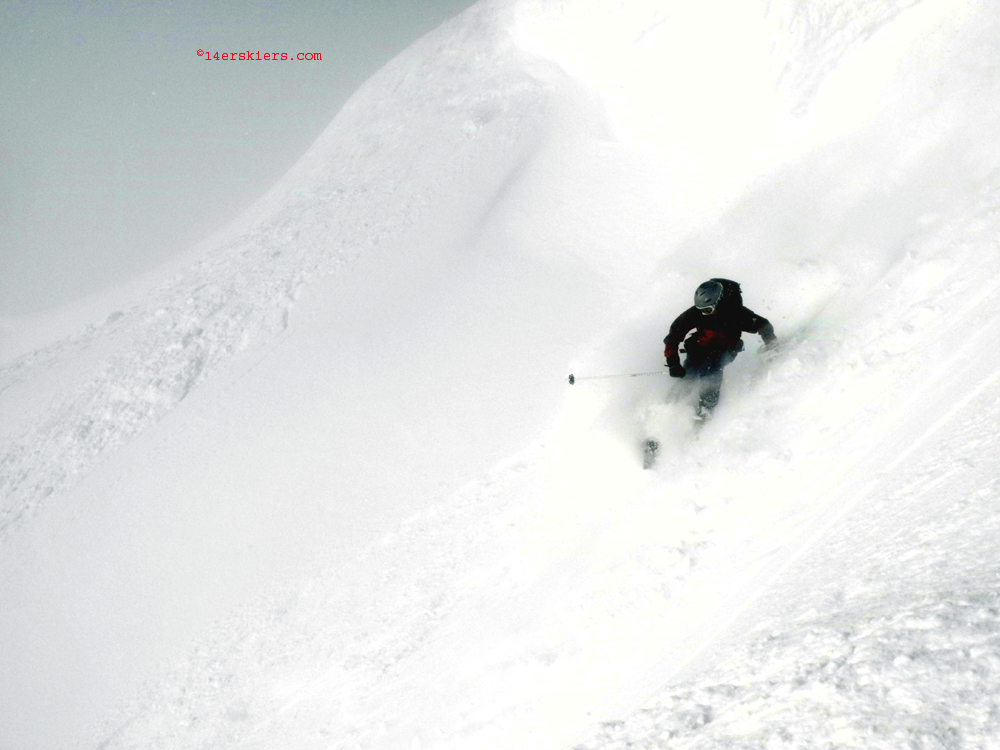 As expected, the visibility got bad from there, but the snow was oh so good. Life inside the ping pong ball isn’t so bad. Brittany: 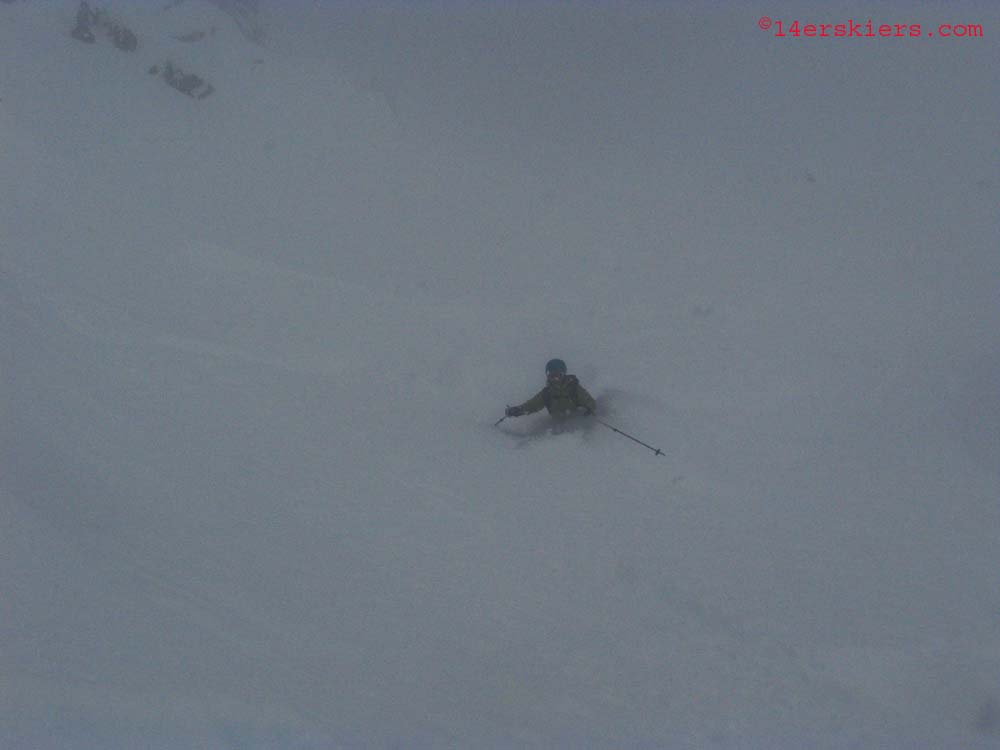 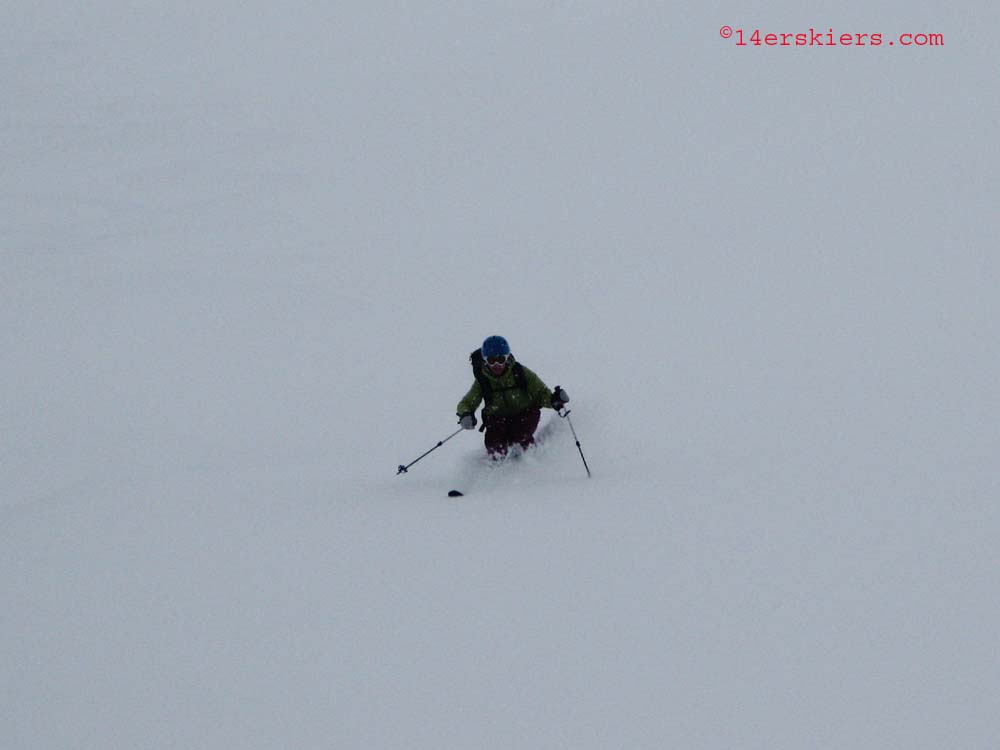 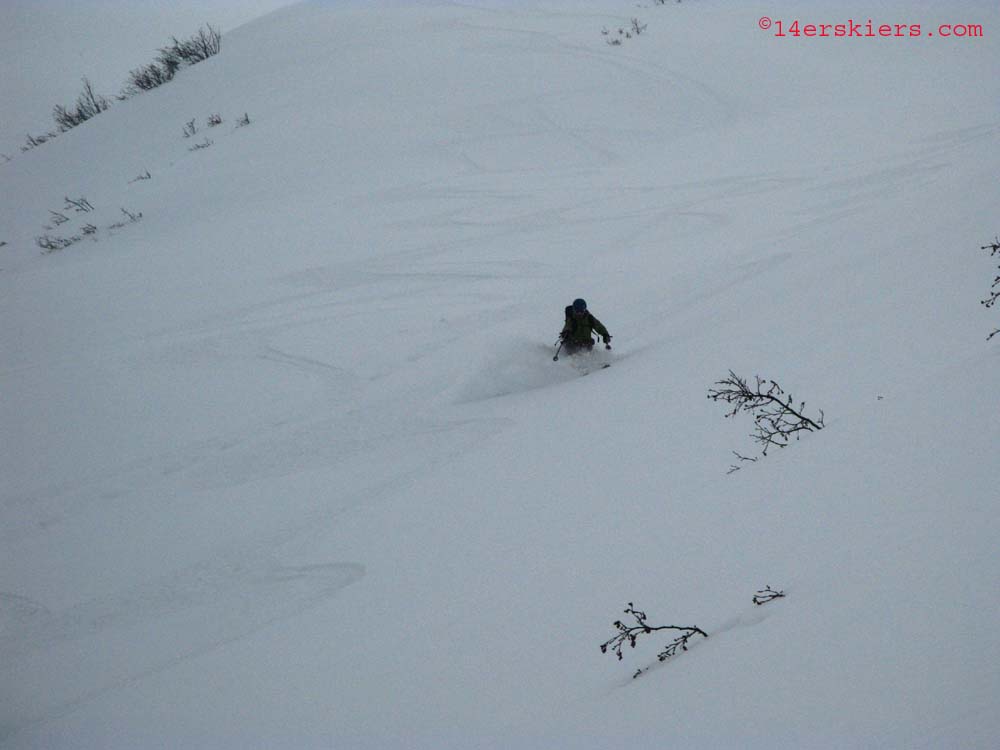 Still, we made it through the cloud layer and it wasn’t so bad after that. Frank: 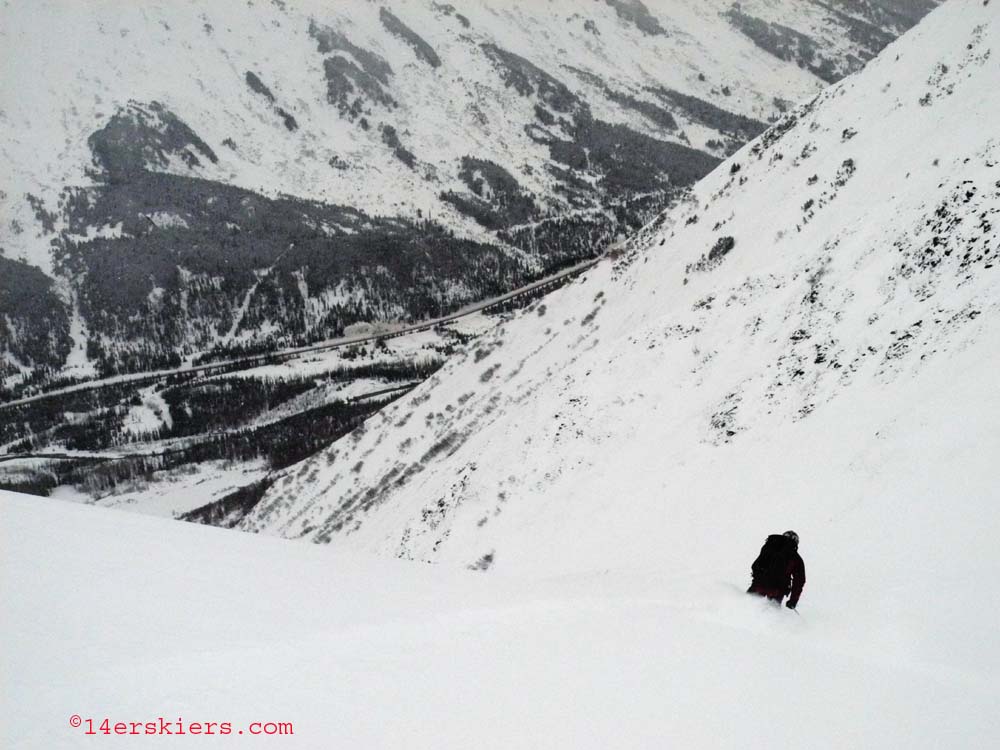 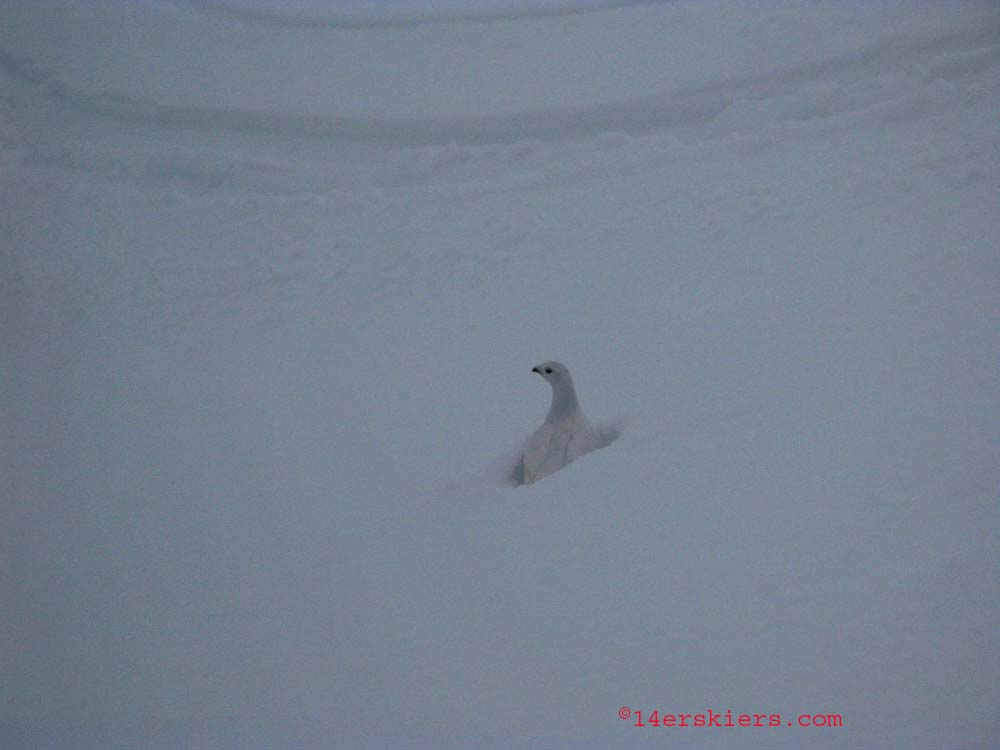 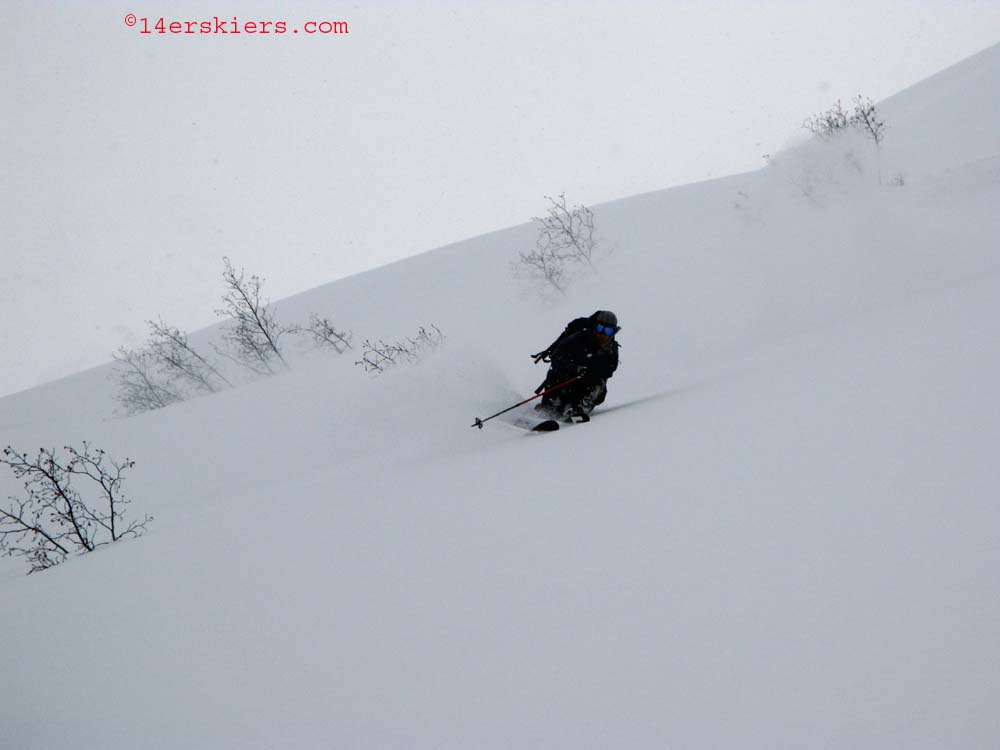 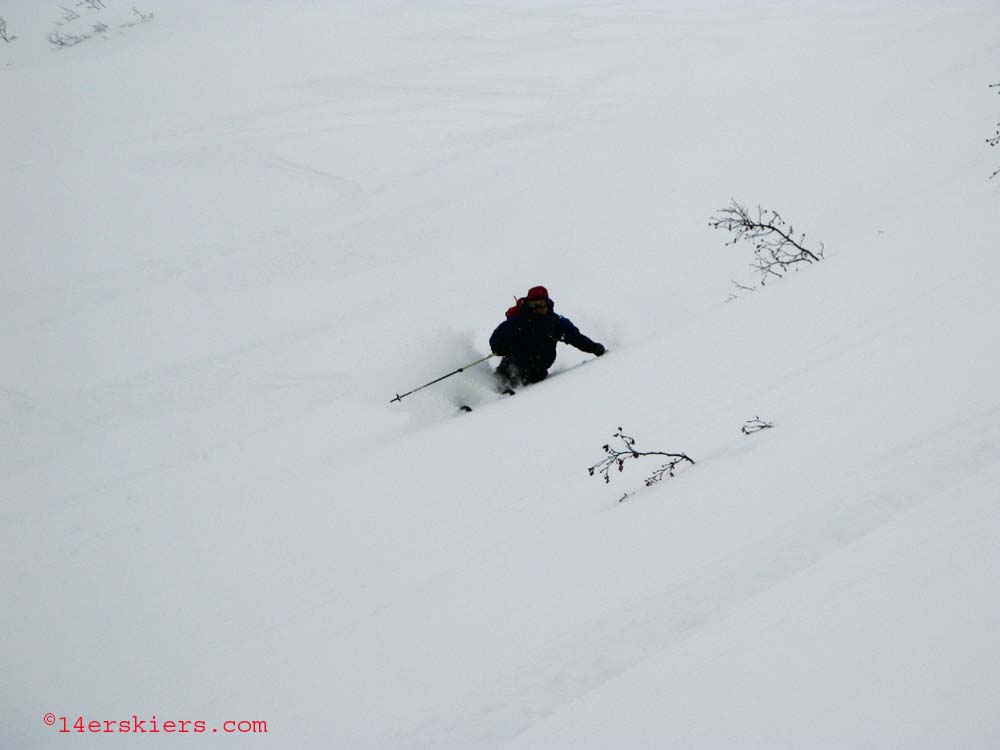 Looking back at the route. Most of it is obscured by the clouds, up and looker’s right. 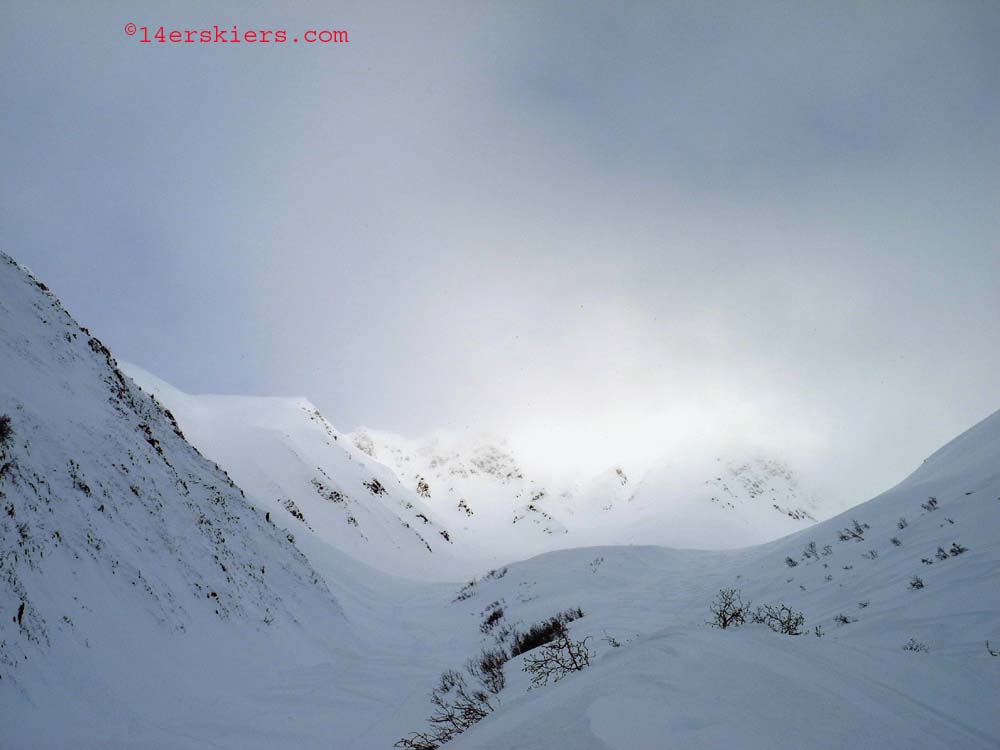 TT43 from across the highway the next day, bathed in sunlight (the route is on the opposite side): 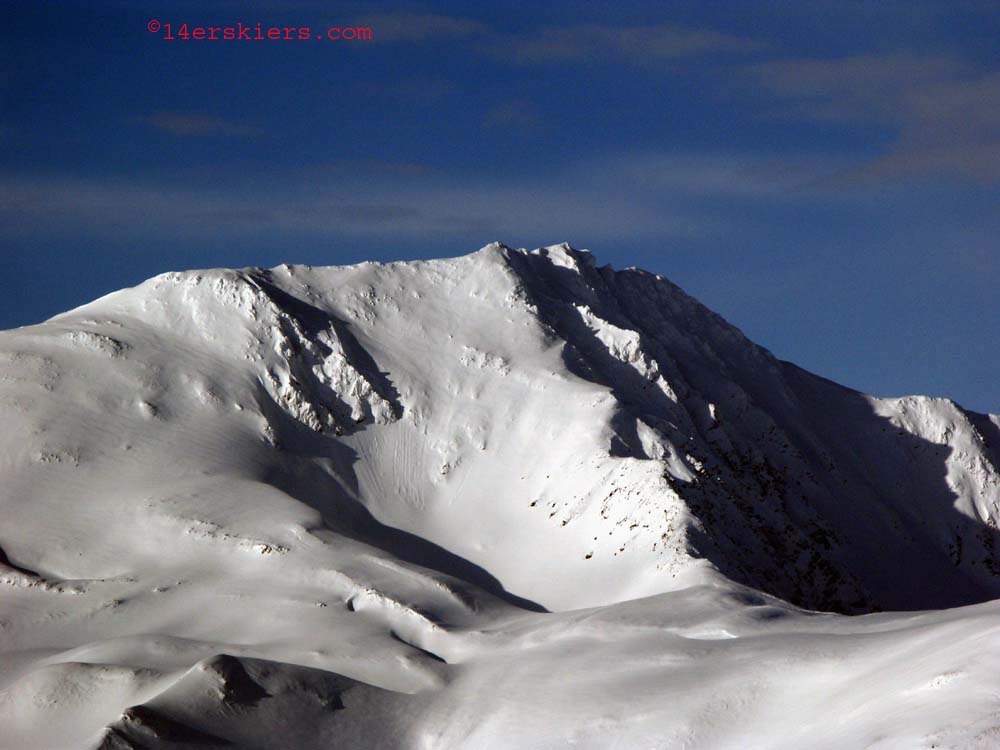 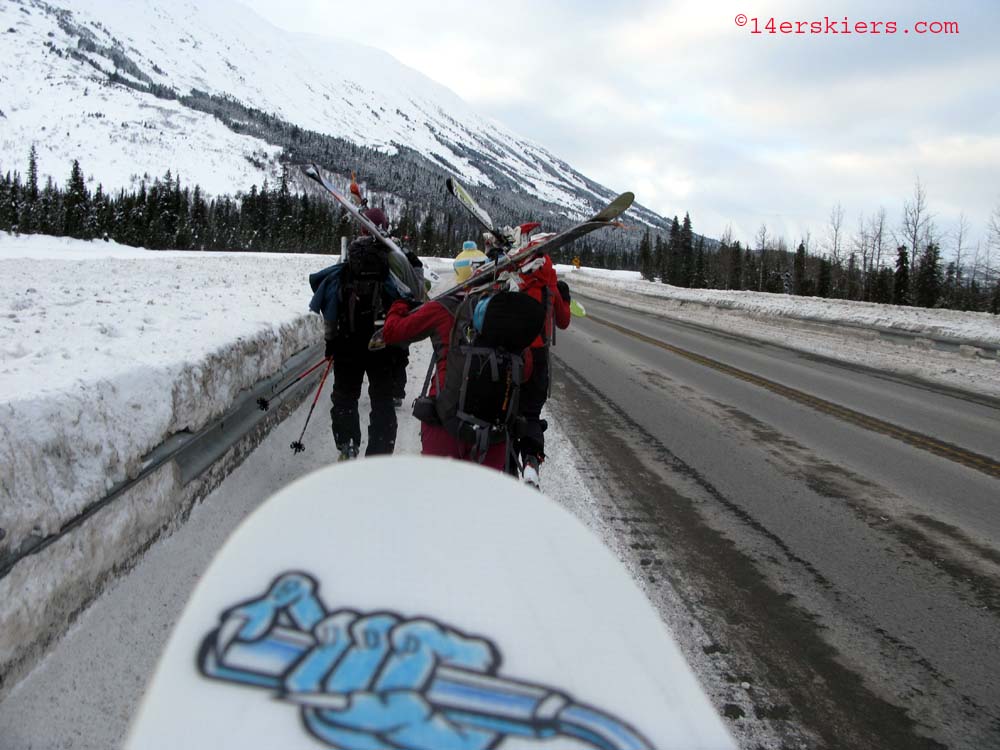 Posted these up before, but I pulled the trigger on them myself and I’ve been pretty happy with them so far, certainly for the price: