From Lisbon, we took a 3 hour flight to the Azores. We landed in the nautical and historical town of Horta on the Island of Faial. One of our first sights was the Pico volcano on the neighboring island of Pico. Guides and tour books highlight this very view. Still, it’s a sight not just to be seen, but also to be felt.

Unless you live on the East Coast, you probably aren’t sure where the Azores are. When I describe to people that they are in the middle of the Atlantic Ocean, most people picture the Canary Islands. But the Canaries aren’t really in the middle of the Ocean. The Azores that lie about 2000 miles from the East Coast of North America and about 1000 miles from Europe, right smack on the mid-Atlantic Ocean ridge. At the boundary of three tectonic plates, the volcanism in the area created this group of nine islands that belong to Portugal.

The original history of the Azores is a bit scant. But it is clear that Europeans knew about this group of islands in the Middle Ages and even appeared in maps in the 1300’s. Still, their official “discovery” happened in 1427 by Diogo de Silves, or in 1431 by Gonçalo Velho Cabral- depending on the source. Cabral is responsible for the first settlements, which happened in 1436 on Santa Maria first and then later on São Miguel. So, these islands were settled long before Columbus made his way to the New World.

From ECHO- A Natural Connection to the Azores, Log Books.

Though the Azores are not as well-known today, their location made them the center of many important matters throughout history. The Azores provided important refueling opportunities for ships between Europe and North American, the first telegraphs and phones relied on stations in the Azores, and trans-Atlantic flights used to stop here for rest and refueling as well.

Today, many Americans are unaware that the Azores even exist, even noted by Mark Twain during his visit to the area. But, ties between the Azores and America are actually pretty tight. In the mid-18th century, Americans had a crucial role in the development of the whaling industry in the Azores, which quickly became a major economic staple. Horta became the the sister cities to places like Nantucket, New Bedford, Fall River, and Cape Cod. Evidence of these ties can still be seen today: see Nantucket Today and New Bedford Whaling Museum (has an Azorean Whalemen exibit). As we visited whaling museums in the area, Nantucket and New Bedford were mentioned over and over.

The whaling ties brought Azoreans to the US, causing a wave immigration. As the whaling industry declined, and was eventually forbidden in the 1980’s, the economy of the Azores declined as well. The younger generation looked for opportunity and with existing ties to the East Coast of the US, many of these Azoreans found themselves there as well. Still, even as Anthony Bourdain noted in his Azores episode (see video clip below, these relocated Azoreans are proud of their heritage. And recent prosperity in the Azores is bringing many of them back.

From ECHO- A Natural Connection to the Azores, painted by Manuel Joaquim Madruga, currently located in the New Bedford Whaling Museum.

So, how did we come about spending our honeymoon in the Azores? As we discussed where to go, we decided to nix the skiing. We figured skiing would be the center of many of our future vacations and that our honeymoon should be spent doing something we otherwise would not do. We wanted off-the-beaten-path, but didn’t want to deal with the hassles of Third World. One evening we sat down to watch one of our favorite shows, Anthony Bourdain’s No Reservations– a food critic who travels all over the world telling tales of both food and culture. In this particular episode, Bourdain traveled to the Azores. I looked at Frank, “Why don’t we go there?” It certainly seemed to fit the criteria. We liked the idea of going to a group of islands that no one really knew existed. Further investigation revealed that is was indeed an interesting place. So, off to the Azores we went!

Faial is one of the smaller of the Azores islands, but still plays an important role in the history of the islands. Though the actual history of the settlement of Faial is a bit unclear, it seems to be documented that a hermit more or less settled the island first in the mid-1400’s. He was followed by some other Portuguese settlers that we know little about. But, true documentation begins when a group of Flemish, under the leadership of Josse van Huerter settled the island in 1467. They first settled in Praia do Almoxarife but had problems there due to a lack of potable water and relocated to a different valley to a town which which now bear the name of Flamengos, the Portuguese term for “Flemish people”. When a second group of Flemish settlers arrived, they concentrated around the present-day Porto Pim area, creating the Vila de Orta, a translation of Huerter’s name. Eventually, this name morphed into the city of Horta. Today, much of the Flemish influence has vanished, save the names of a few particular places.

Horta is a hub of history. As you walk around through the narrow streets and into the harbor it’s hard not to imagine it full of sailors. Or, better yet, being ravaged by pirates. At times, you feel like you’re in some Pirates of the Caribbean movie set – except you’re not in the Caribbean at all!

Pico at night. It’s hard not to be mesmerized by the beauty of this volcano.

We stayed at a bed and breakfast called Estrela do Atlântico, literally translated “Star of the Atlantic”.

That is where we met Ruth. A modernized hippie turned hotel owner, Ruth is full of vibrant stories, like so many others here. Originally from Germany, she made her way to the States for college. Eventually she found her way on to a ship that was sailing across the Atlantic. When I asked her how she found herself in the Azores she replied, “The same ship.” Her ship had stopped for some time on Horta and before she left to continue her journey on to Europe, Ruth pledged she would come back and buy some property. That she did. Those were the days when trans-Atlantic ships were more frequent than planes, Ruth explained. Several ships arrived daily, yet planes arrived maybe once a week. Though a few flights arrive each day now, the Horta airport is small, only about three gates, something we are accustomed to as our own local airport in Gunnison is the same size.

The interior of Estrela do Atlântico was as colorful as Ruth’s vivacious character.

Our room was gigantic- a bedroom, living room, and kitchen- decorated in the themed color of blue… or azul… The name of the “Azores” is said to be derived from the word azul.

Art work on our wall showed how proud the Azoreans are of their history.

The views from our room were lovely. 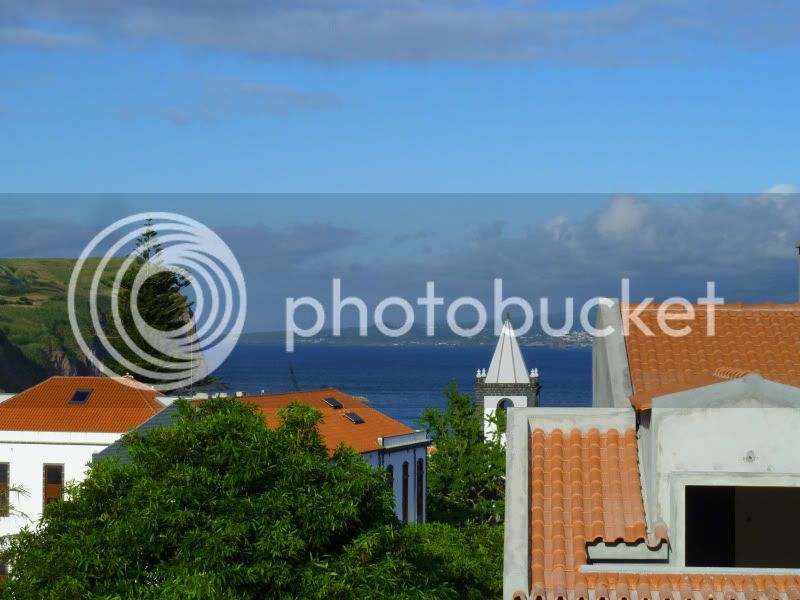 We still had so much to explore in Horta… coming up next!