Of the many peaks I hoped to find myself on this season, Precarious Peak ranked right near the top. Deep in the heart of the Elks and often shielded from view in the midst of other high peaks, Precarious had remained a mystery to me in both summer and winter. In January, mtnbikerskierchick took this photo of Precarious from Gothic, and I often caught other glimpses of it, or so I thought.

So often this season I’ve found myself re-tracing familiar steps on familiar peaks, or at best teaming up with someone like don pedro who may have already skied whatever day’s objective we were working on. Heading off towards Precarious with Rob11-11 yesterday into the relative unknown was something I’ve truly been missing lately. As much as I love not needing a map just about anywhere I ski or bike locally, the lack of adventure is often noticeable.

After driving the recently plowed and re-opened Gothic road to the trailhead, we made our way upvalley and caught our first glimpse of the day’s objective.

As we went higher, we were greeted by a high cirque of peaks and a number of fun looking lines that I’ll have to get back to. We were on the right track: 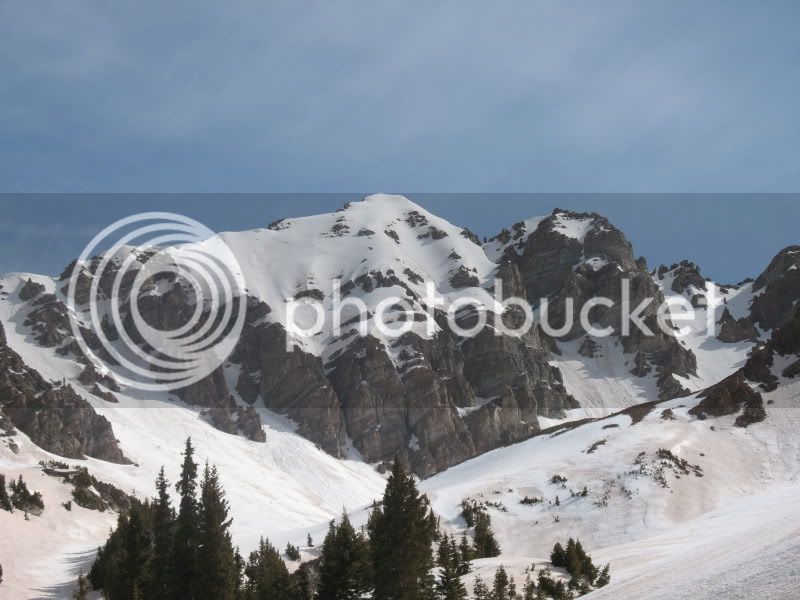 We finished off the skin and transfered to crampons and iceaxes. As is so often the case, the couloir was less steep than it had appeared from afar, not to mention shorter. Still, the last 25′ on the opposite side of the peak was incredibly steep. This photo of Rob doesn’t do it any justice at all.

Meanwhile, looking north I had to wonder if we were on Precarious or not. It turns out that Precarious was indeed across the valley and we had no idea what peak we were on, although it was the peak we had been shooting for. The real Precarious:

In the distance L-R are Siberia, Snowmass, Capitol and Daly. Bellview Mountain in front.

I do not know the name of this peak. I do know that I like it. A lot.

We dropped off the north side, then East to get to our S facing couloir. Rob:

Looking down the couloir:

Parts of the couloir had slid, but it was still super high on aesthetics and we were still stoked. Rob:

Meanwhile, since the temps were staying cool we decided that instead of skiing back the same way we came we should continue on towards another summit. From Mount Crested Butte, these twin summits are always visible:

It didn’t look like it would take too much effort to climb up the backside and drop right down the face and into Copper Creek. Being such visible peaks from our homes, Rob and I were psyched at the way things were working out this day. After about 1,000′ of skinning we dropped off the first summit and then cruised up the other, just because. Rob:

A project to be solved another season:

There were some high clouds, but the skiing was still near perfect corn, despite the best attempts of the stupid dust layer to screw it all up.

This was one rotten and nasty looking face:

At this point, our 11 hour day consisted of just a couple of things, one of which was checking out some pretty sizeable avalanche debris:

…And the other being a crossing of Copper creek:

All in all, this was one of the most satisfying days of the year for me. Hopefully I can get back into the zone this week before the dust marches up to the tops of the peaks.