Throughout my travels in the Sangres, I’ve often caught glimpses of the North side of Crestone Peak and thought “If only…”. As in, “If only that couloir ever filled with snow, it would be such a choice line.” The Sangres don’t get a ton of snow to begin with, and wind and avalanches seem to do a good job of removing any snow that does fall into this couloir. So when I was checking out a TR from Kit Carson on 14ers.com the other day, I was surprised to see the North side looking like this (Ted Mahon photos):

One of the people on that Kit Carson trip was my friend Ted, so I quickly emailed him and asked if the route looked that good in person and if so, would he want to ski it? He said yes on both counts, and rough plans were made. About an hour later, I ran into Josh on Elk ave and asked if he wanted to come as well, and just like that we were a party of three.

The road to Colony lakes was blocked by snow just before national forest land, so we unloaded our sleds and gear and drove back down to legal parking areas rather than risk all the “no parking, you will be towed” signs. Somehow the hinge on my topper had broken, which would prove to be the first of many broken items on this trip. Zip ties did the trick: 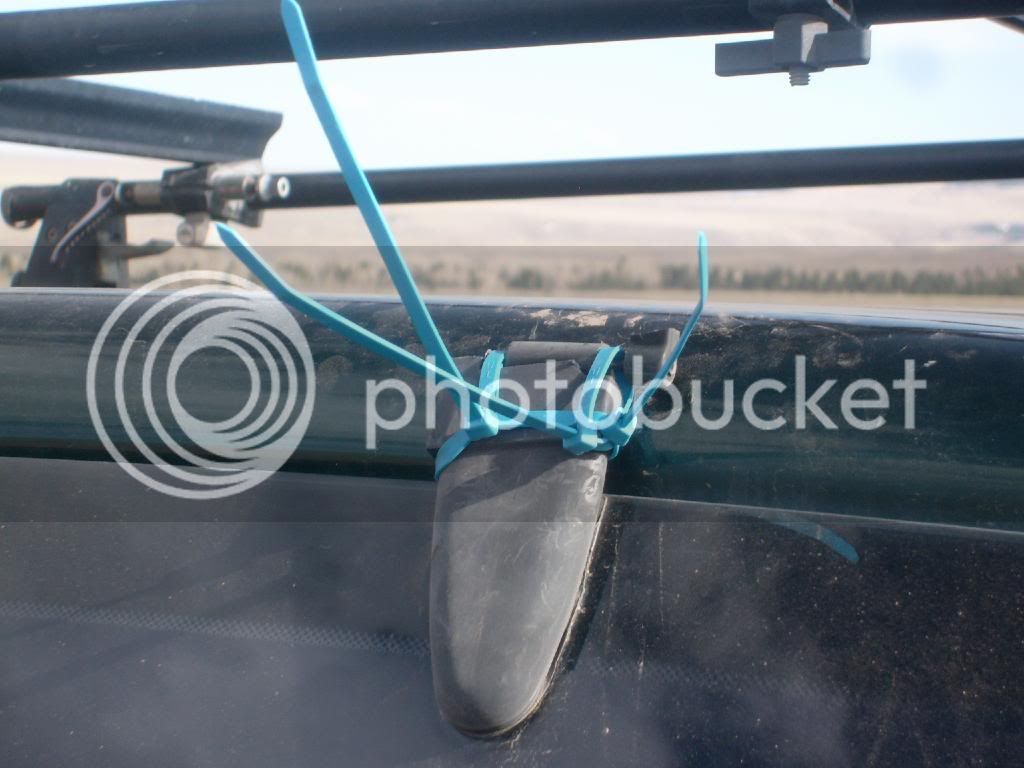 Back at the snowmobiles, the next thing to break was my pullcord. Since snowmobiles are pretty easy to start with webbing or rope even without the pullcord, we were still OK, although I was starting to wonder if this was an ill-fated trip. Some difficult snowmobiling brought us to the summer parking area where we set up camp and waited for Ted to join us. We set out the next morning and were quickly reminded that this view of the Needle never gets old:

Our first step was to make it to the Bear’s playground using the little chutes to the right of the Needle. Ted and Josh, with Marble Mountain (I think) behind:

The bootpack to the Bear’s playground was a nice little warmup for what was ahead. Josh:

Ted on top of the Bear’s playground, with Humboldt and the Wet mountain Valley behind:

We traversed from there over towards the bottom of the couloir which was surprisingly straightforward.

From there, the climb of the couloir was fun in nearly perfect cramponing snow.

The top part was the only hard part, and when a rope was offered, I took it.

From the saddle, we ditched our packs since the 200′ of skiing above looked pretty sparse and rotten. This earned us a nice view of our bootpack at the top of the couloir:

The next thing to break was Ted’s crampon as he downclimbed back into the couloir. Thankfully he wasn’t in a bad spot and the rope came out again to safeguard his one-crampon downclimb. The skiing was carveable powdery windboard for the most part. We had to do a few feet of rockwalking near the top, but after that it was smooth sailing to the bottom. Ted:

We decided to ski to the valley and do the easy skin back to the Bear’s playground from there, instead of traversing all the way from the couloir. We got to the bottom and looked up at… a whole lot of rock concealing our tracks:

We got back to the campsite and were hanging out and feeling good about our day and hopeful to ski Broken Hand peak the following day:

That’s when we finally suffered trip ending breakage of Josh’s well-worn fritchi’s. The snow was pretty rotten where we were camping, so Josh went to put his skis on to walk around when the heelpiece snapped.

Between Ted’s broken crampon and Josh’s broken binding, I was the only one with functional gear, although even I had not remained unscathed since my goggle lenses broke when they somehow got smushed into my pack wrong. With the skies darkening as another spring storm approached, we decided we had had enough things breaking and high-tailed it outta there, content with our ski of Crestone.