Teocalli mountain (13,209′) was named by the Hayden survey for its’ resemblance to aztec pyramids. Anyone driving from Gunnison to Crested Butte will surely notice this distinctive peak lying to the N about 2/3rds of the way up highway 135. Roughly 25% of the dogs in Gunnison county are named “Teo”. The south face is a local’s classic- both times I’ve skied it before, it had some of the best hero corn I’ve ever skied. But Teocalli is a skier’s mountain, and it is riddled with top-notch skiing possibilities on all aspects in addition to the S face.

People usually ascend the climber’s right ridge. While ascending this ridge, climbers will pass a couple of steep, spectacular chutes that drop to the NE. The only problem is that descending these chutes will drop you into Middle Brush creek, which is difficult to access on a snowmobile due to a really nasty sidehill. So, Pete and I decided to try skiing down and then reascend Teocalli, where we hoped to ski the W couloir and reach our snowmobiles.

Pete on the skin:

I’ve always liked the view of Crested Butte from here, with the North Face terrain front and center. Uncompahgre is visible in the far distance.

[URL=http://www.tetongravity.com/forums/showthread.php?t=92006]Star Pass[/URL] is in this photo. Last night, starting at midnight, competitors in the 10th annual [url=http://www.elkmountaintraverse.org/index.html]Elk Mountain Grand Traverse[/url] had to make their way over the pass on their way to Aspen (~40mi)

We had a great view of the S face of Castle. Pete made the first descent of this face a few years ago, trending skier’s right, then skier’s left on the super-exposed ramp and into the central couloir. The two couloirs on the looker’s right can be linked up with the East face. Jasper and Geo may have been the first to do this route a couple of years ago.

A little short of the summit, we arrived at our couloir:

The entrance was not as simple as most, and we took some time checking it out. We started on the right and then weaved our way through the rock bands until we could enter the couloir proper.

Wait, where am I going again?

Then I made my way through.

The couloir wasn’t as powdery as we had been hoping for, but it was still plenty carveable. Pete:

Pete enjoying the best snow of the day down in the apron. Our chute is the improbable looking one in the center, while another one is off looker’s left and there is a nice, straightforward one off the summit.

Our original plan was to ski down valley a little ways and then come up Teo ridge and rejoin our route from the morning. But the col between Teocalli and UN 12,934′ seemed like a better and more interesting option, so we headed the way.

This way was indeed fun, as it brought us deeper into the wilderness and farther from our sleds. We passed right under the N face of Teocalli, which has even more high-quality lines.

Once on the N ridge, we admired the surrounding mountains and their possible lines. Unfortunately, our bluebird day was turning gray, so the photo quality goes down from here on out.

A unique view of Snowmass, Capital, and Maroon:

Our route up the N ridge of Teocalli looked daunting from the col. 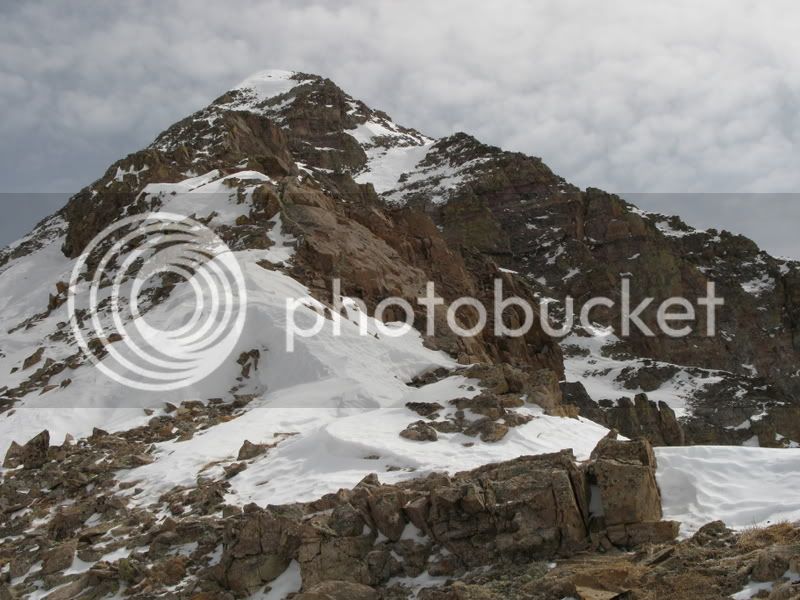 Pete cruised right up the snowy chossy exposed mess, while I struggled and cursed my way up. Pete:

Anyway, we made it up and by then, the skies had really gotten cloudy. This prevented our hoped for run #2 from ever softening up, so I guess the W couloir will have to wait for another day. Not a great picture of it, but it’s here:

We skied down the S face, which had softened up a little bit in the morning when there was sun, but it was far from being hero corn. We took a couple of shots despite the poor lighting conditions. Pete:

Yesterday was one of the better days I’ve had in a while, despite the turn for the worse in terms of weather. I should be out skiing right now, since we’re getting some snow, but yesterday kicked my butt, especially since I got to carry the rope whic