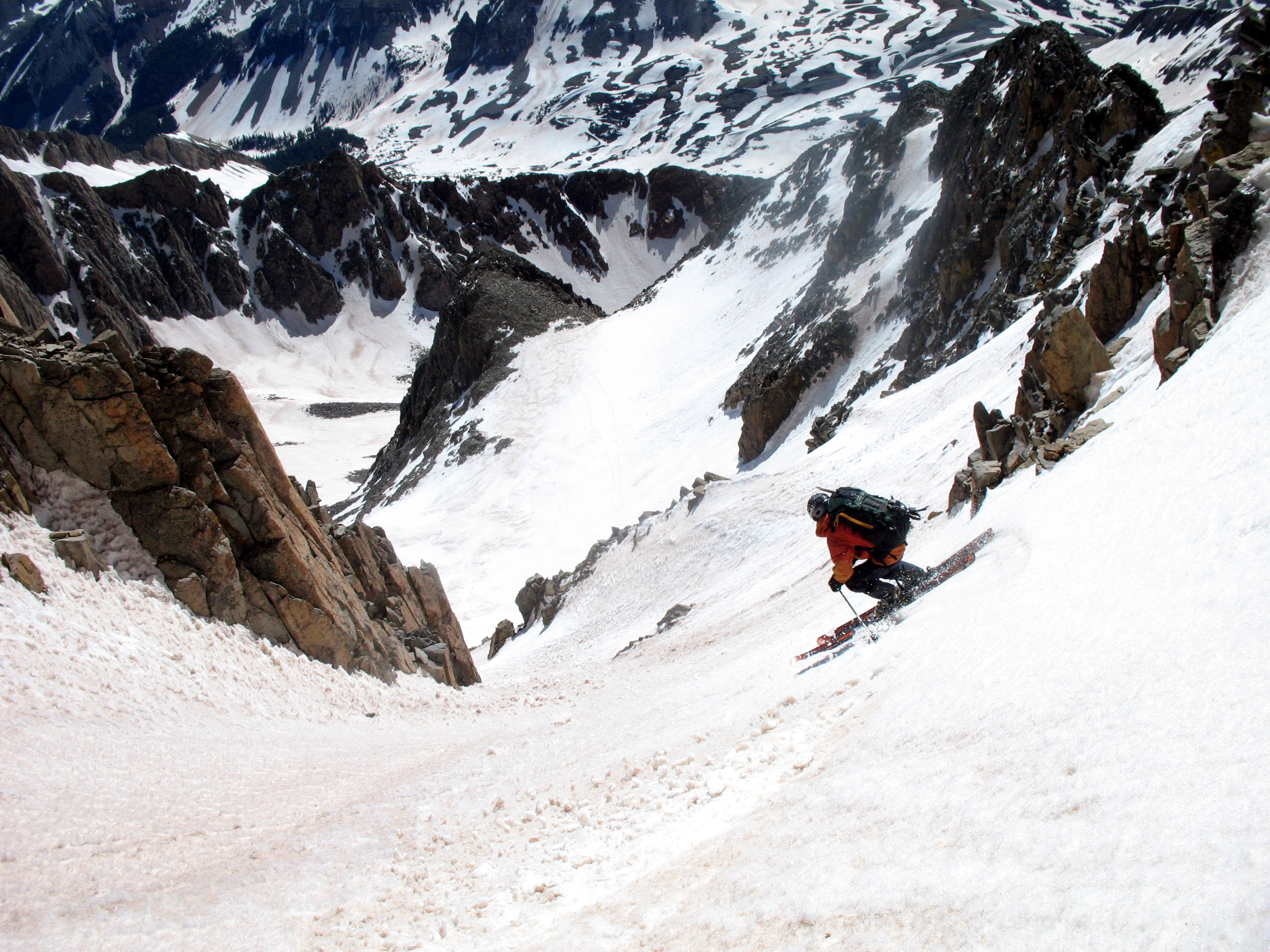 That said, there remains a bit of contention surrounding Mount Wilson, as it is not often that it comes into condition from the summit. But, when Chris Davenport skied it, Mount Wilson was in condition, and he was able to ski it from the top. During my first descent of Mount Wilson, I was not able to ski from the summit block, and was forced to walk about 40′. But, I personally think that to claim it as a true ski, you need to follow the Davenport standard and get this one from the summit. This is why I returned in April 2011 to claim a true descent, along with Matt Kamper and Kim Ross.

Since then, many others have skipped trying to ski the summit block altogether. I suppose it’s up to an individual’s personal standards. But, I feel that unless you have made turns from the true summit, you can’t claim this one – especially if your goal is to ski all of Colorado’s fourteeners.

Davenport certainly upped the standards for fourteener skiing, but I have watched them get degraded since in recent years. It is my hope that future fourteener-skiing finishers take a hard look at their summit skis and make sure to uphold the standards that have been set. These standards should be upheld as they make the goal just a little more challenging. Getting a line in condition is important, after all, and part of ultimately accomplishing the goal.

Below is a slightly modified version of my report for skiing mount Wilson, which would become my 52nd fourteener skied.

After tagging El Diente the previous day, we went back for more. It was another early wake-up at 3 am. Early wake-ups like this always start out a bit hazy. Once my mind began to clear away the dreams, I became acutely aware of just how cold it was outside- much colder than yesterday. Our suspicions were confirmed as we passed through the first few snow patches. We happily found the snow frozen solid where it had been slushy the day before.

As we continued to hike above treeline, the sun still had not risen above the mountains. Both Frank and I commented on just how cold it was. We believe that temperatures were into the teens.

As we reached the top of Rock of Ages saddle once again we headed to the left instead of to the right towards El Diente. Our plan was to traverse as much as we could across the basin, without losing much elevation. We were aiming for Gladstone Saddle.

Mount Wilson as seen from Rock of Ages Saddle, with Gladstone saddle to the left.

View of our traverse, as seen from the summit of Mt. Wilson. Rock of Ages Saddle lies to the left. The arrow points upward to Gladstone Saddle.

In our traverse, we only lost a couple hundred feet of elevation and we were able to hike up quickly to the top of Gladstone Saddle. The views were amazing.

From there, we headed up the east face of Mount Wilson.

Looking back toward the scenic Gladstone Saddle.

We approached the saddle to the lookers left of the summit peak, and from there wrapped around to the right for an easy scramble to the summit.

The register. As with El Diente, we are following in the tracks of our friend Jarrett.

Frank and I enjoying the summit!

One of the many reasons I like climbing fourteeners is for the spectacular views. This day, with its calm bluebird skies, was no different.

Wilson Peak and Gladstone with more of the San Juans behind.

The previous night’s hard freeze helped our summit approach. But, the temperatures were quickly warming so we switched into ski mode fairly quickly. Unfortunately, we were unable to make a true summit descent. The upper 15 feet had snow, but the 30 feet below that did not. Rather than bang and scrape my skis around to call this a “true summit descent”, I opted to downclimb this part. I’ll have to go back and get Mt. Wilson under better conditions for a true summit descent. But, for now, I’ll say its a 14er descent with an asterisk:)

Here’s Frank’s opinion on the matter:

Summit descents of Mount Wilson are hard to come by. It is one of the peaks which Dawson did not ski from the summit, instead starting at a notch roughly fifty vertical feet below the summit, which Ted Mahon did as part of his project as well (he’s since gone back, however). Davenport and his crew found the East face to be in condition, and made some great technical straightlines off the summit. A week later, Frank and Jeremy Wegner were able to do the same. Summit descents since that time have shifted over to a short SW facing gully, with Joe Brannen, Jordan White, Jarrett Luttrell, and Christy Mahon all skiing/snowboarding this line. Some were able to do this without downclimbing. Others skied until the snow petered out and they were forced to downclimb a short portion of the 40-50 vertical feet of the gully. Jarrett’s report is here, while Joe and Jordan’s report can be found here. (Christy and Ted skied it the same day as Jarrett, but they have stated that they were able to keep their skis on the entire time, whereas Jarrett could not keep his snowboard on.) The skiing in this gully seems pretty marginal, but sometimes that what is needed for a true summit descent. In any case, we skipped the 10 or 15′ of skiing in this gully and downclimbed the entire 40′. Under Dawson’s old standards, this would count for sure, but other descents have started off the summit, so this particular descent of Mt. Wilson gets an * for the time being. We’ll repeat it at some point, it’s a great mountain that’s well worth repeating. Ultimately, those who wish to ski all the 14ers (and claim it) have 2 main responsibilities: being honest with everyone about what they’ve done, and finishing the goal in a way they can be internally comfortable with.

Frank, making his way down the upper East face.

Me, skiing the upper east face.

Frank making his way toward the Boxcar couloir.

Looking back up at the upper east face from the top of the Boxcar couloir.

And then he was off!

I kind of liked the Boxcar couloir too 🙂

While we were in the Boxcar couloir, warming temperatures gave us a warning sign as briefcase-sized (and shaped) rock came whizzing by me, landing only two feet away from my skis, continuing down the slope. “Rock!!!!! ROCK!!!!” I screamed at the top of my lungs, as Frank was below me. After that, we booked it on out of there as quick as possible.

Taking the Boxcar put us lower down in the eastern basin and we had to skin up to Gladstone Saddle once again.

A few more scenics from the top of Gladstone saddle.

From there, we skied a little ways down into the northern basin, and then skinned up Rock of Ages saddle for the third time in two weeks. The ski down brought us to a beautiful mini-ice fall that had formed overnight from the cold temperatures.

Though this route on Mount Wilson requires many transitions, it is still a fairly time-efficient and simple route. Skiing the Boxcar couloir is a ton of fun – and, in our opinion, should not be missed if you’re already taking the time to ski this peak!

Frank and I thoroughly enjoyed our Memorial Day weekend, tackling these two peaks, Mount Wilson and El Diente, knocking two more fourteeners off of my list. At this point, I still have two fourteeners remaining- Pyramid and Pikes peak. I missed the optimal snow and weather conditions on Pyramid, and will be saving this peak for next season, hoping to hit it during it’s prime. And Pikes… well, that’s been the one I’m saving for last. Hopefully there will be a party on Pikes next spring 🙂

Article Name
Mount Wilson Ski
Description
Located in the San Juans, Mount Wilson is a great fourteener to ski! Join Brittany as she recounts her descent of this peak, her 52nd 14er to ski!
Author
Brittany Walker Konsella