At the start of this summer, I jotted down a few goals that I hoped to accomplish this summer. One of them was to climb Avery’s “Red Diamond” face, the impressive slab of rock that most every rider of trail 401 has noticed as they pass under it on both the road and the lower part of the trail. For various reasons, whether it was finding the right partner, the weather, or simply my focus on biking in the summer, Avery has been on my list for years but I’ve never gotten around to making it happen. This year, with Brittany off the bike for the most part, she suggested we climb a peak and then she suggested Avery- so Avery it would be!

We began our hike at what used to be the Avery Peak picnic area- a flash flood tore through the area a few years back so the USFS closed it off (but all but the most recent maps will still show it). We walked up the road, past the solitary house, and onto 401 for 75 yards or so until we were directly under the face, staring at the gully of doom. 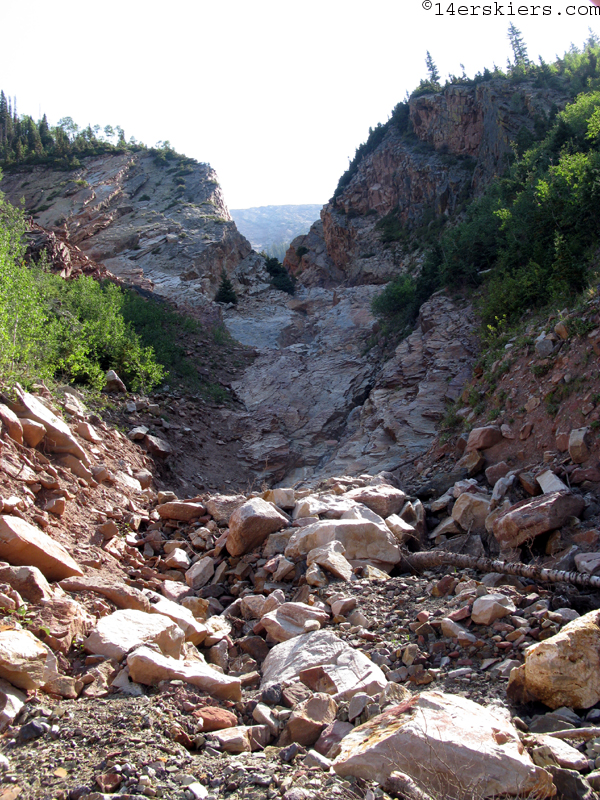 Perhaps the gully was the main reason I’ve never been up Avery- it looks horrible. Surprisingly, however, we found out it wasn’t all that bad. Perhaps the flash floods that roll off the face and into this gully every year or two “cement” everything in place- whatever the case the rocks weren’t very loose so the climb up the gully was downright enjoyable and even gave us the occasional warmup for the climbing ahead: 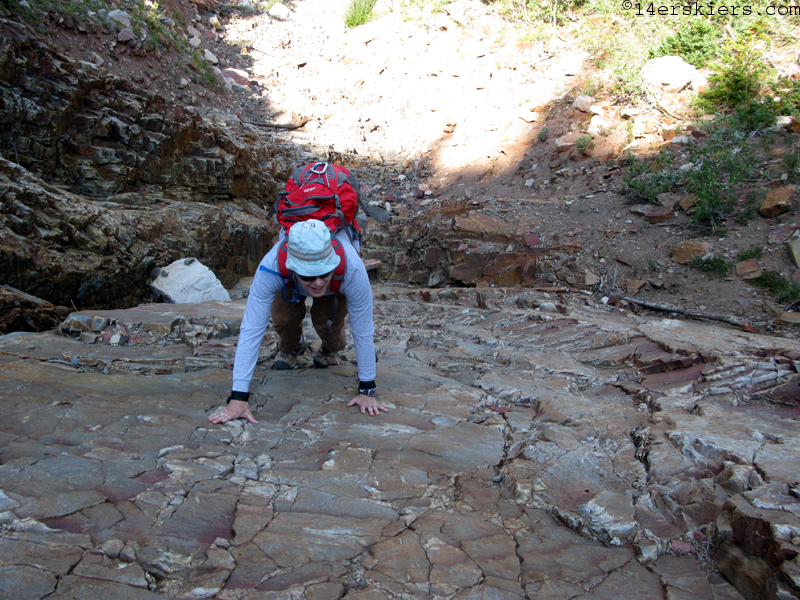 Then I went up. 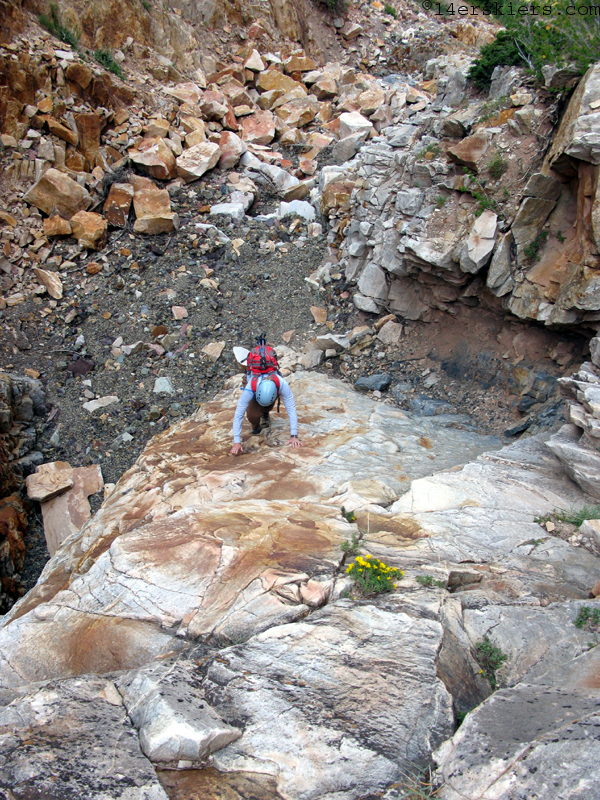 Eventually, the face begins to open up and you’ll want to get out of the gully and onto the face. At this point, we switched to our rock climbing shoes, as most climbers of the face do. Sticky-soled approach shoes will work as well, but the main point is that you’ll want more than just your average Vibram sole.

At this point, Brittany told me to make it look like I was doing something, so I did. 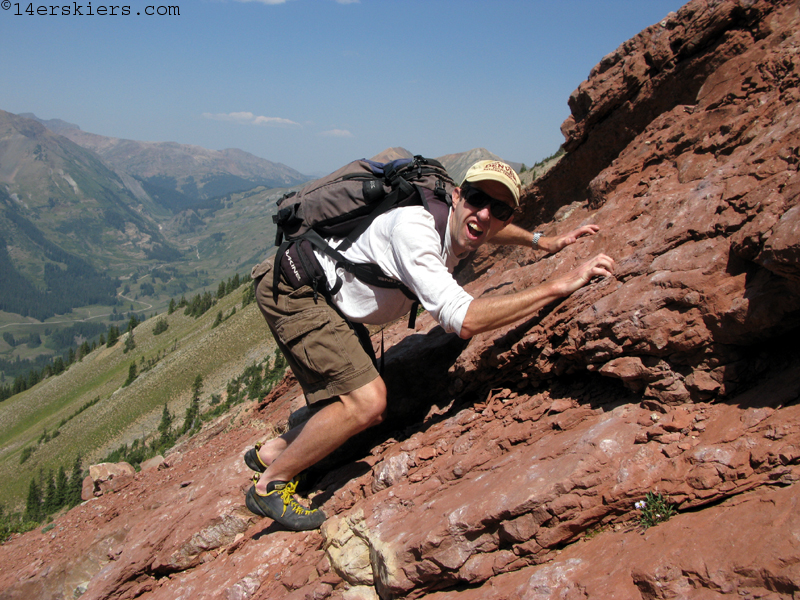 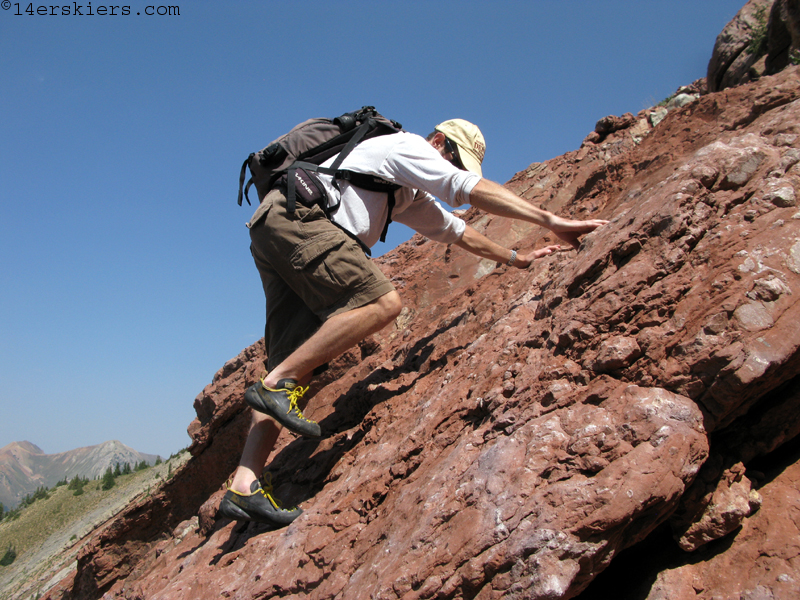 Brittany begins her climb on the red sandstone that comprises much of the face. We also found quite a bit of white conglomerate that was even better for climbing. 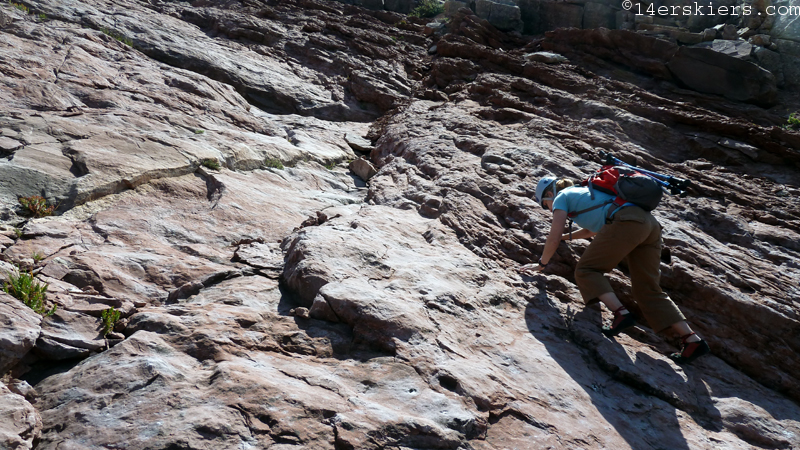 We trended right during the bottom half of this climb. The name of the game on this face becomes apparent very quickly- you’re scanning for clean rock, even if it’s steeper than and more intimidating than rubble-filled steps to the side. Rainstorms clean off many areas of the slab like a shopkeeper hosing off his/her sidewalk- and that’s what you’re looking for. 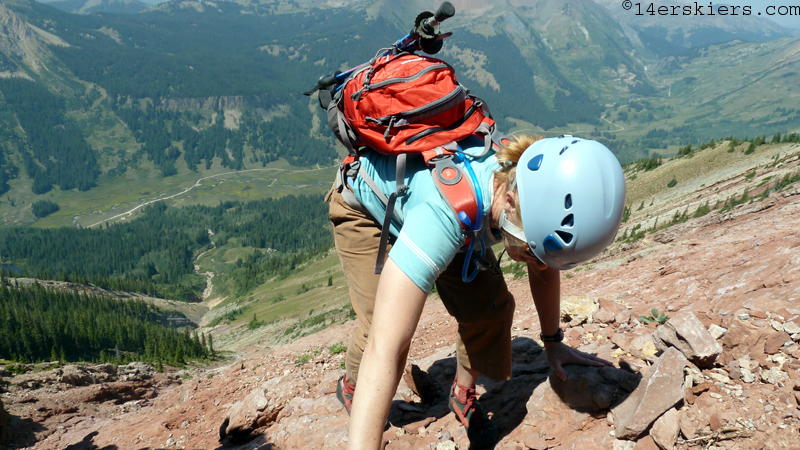 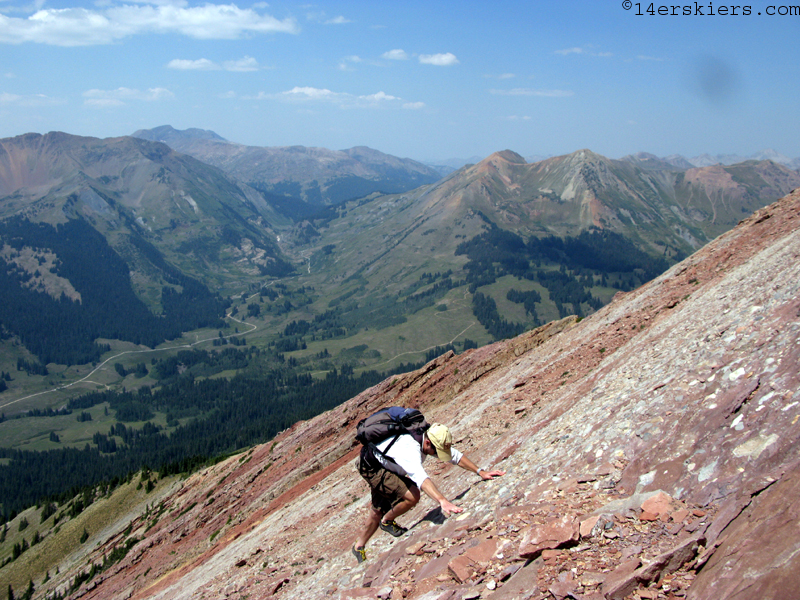 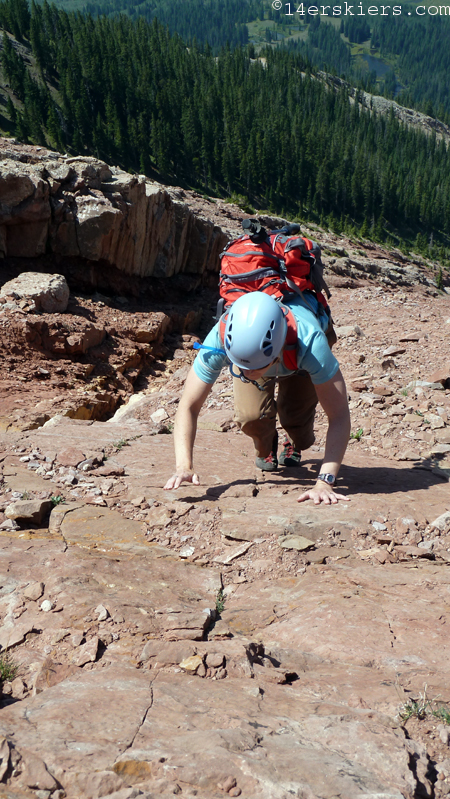 The climbing here is beautiful and of the “choose your own adventure” style- go right, left, or straight depending on your mood. 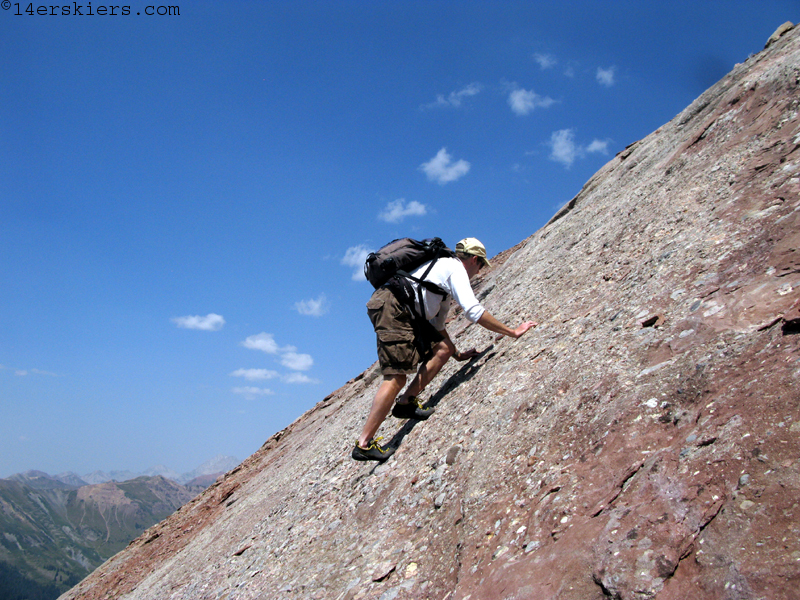 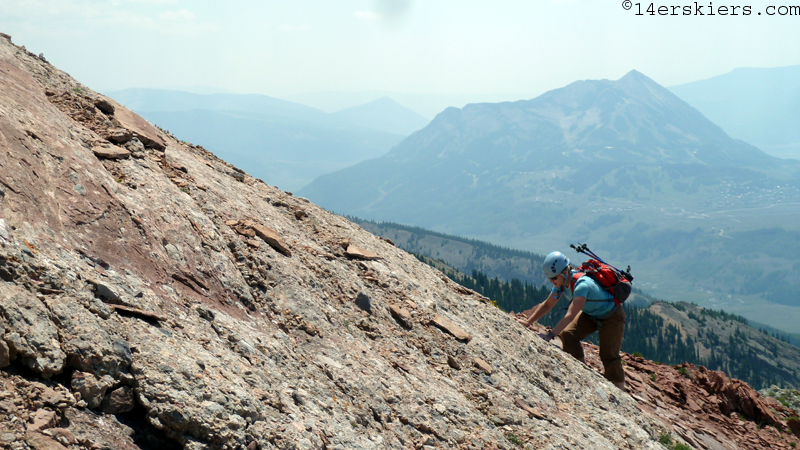 The rock here was truly beautiful: 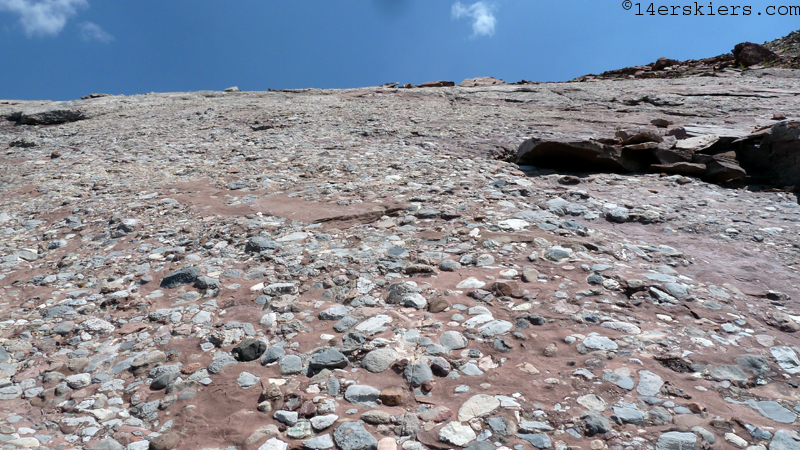 The face sits at roughly 45 degrees, but it will feel like more than that at times. 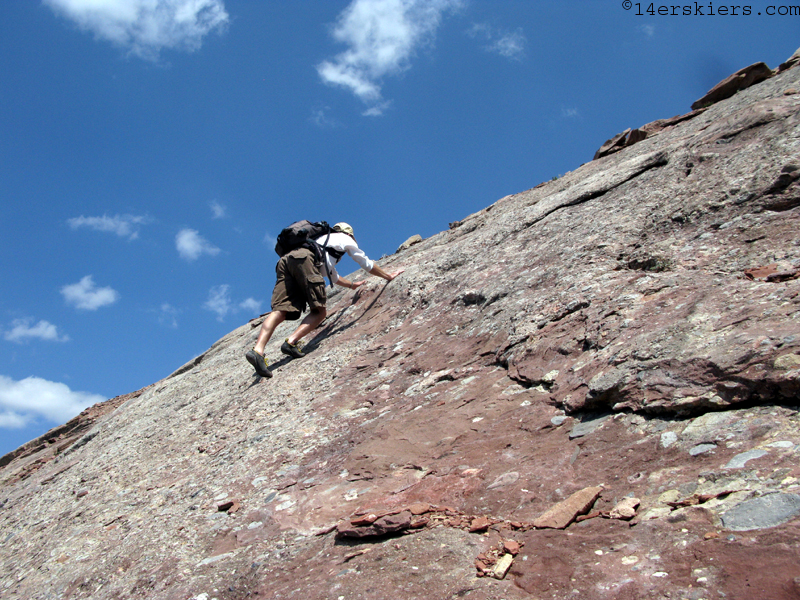 After starting out on the right side of the face, we had traversed left back to the center and climbed nearly straight to the summit, with just a short ridge walk to go. 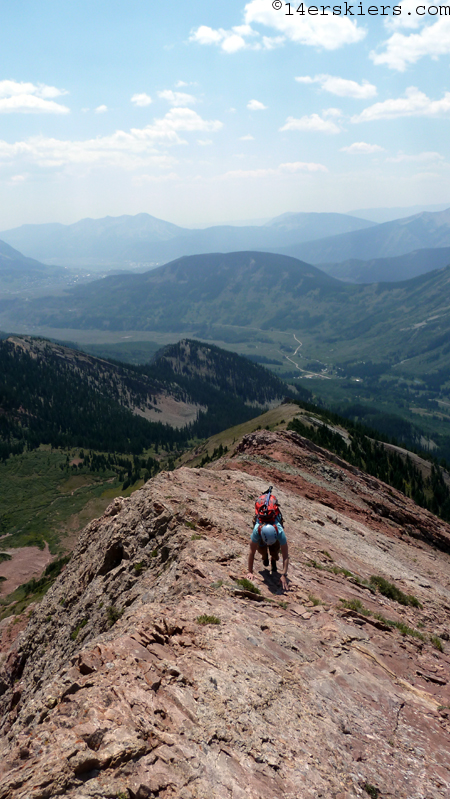 Avery’s “summit” is just one point of many along a ridge that stretches out to several sub-summits. Still, the views from this commanding summit were impressive in all directions.

There are several ways off the summit, but we were hoping to reach the ridge to our East, as this had been recommended by a friend of ours as a great circuit. 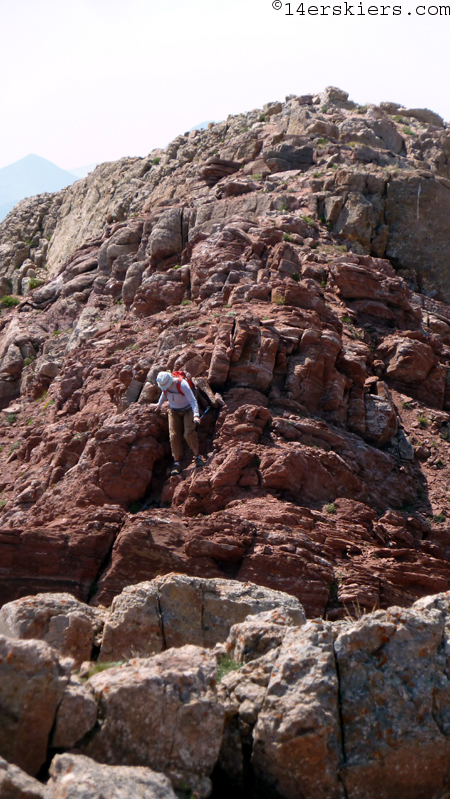 We weren’t finding any easy routes to connect over to the ridge so we decided to just head straight into Virgina Basin. The summit, and what we downclimbed, is behind Brittany: 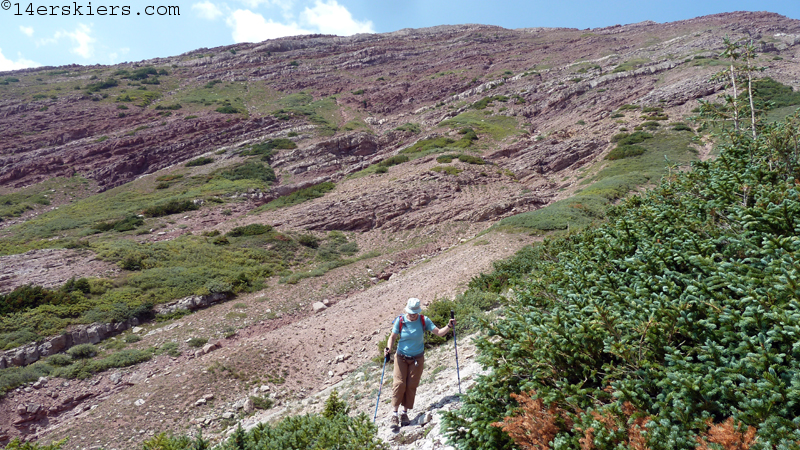 We spotted some game trails, so the willows weren’t as bad as Brittany’s hat makes it appear: 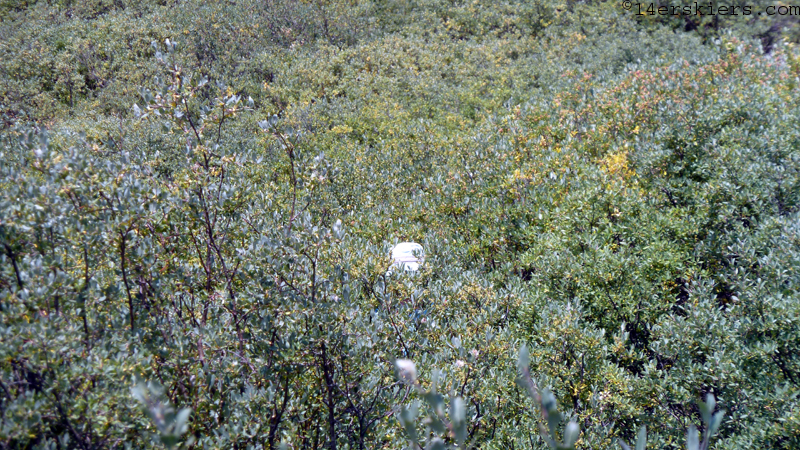 As it turns out, there is a substantial trail in Virginia Basin that isn’t marked on maps, so we lucked out on some easy sailing down to the Judd Falls/ East Maroon trailhead, followed by a quick hike up Gothic road back to the car. 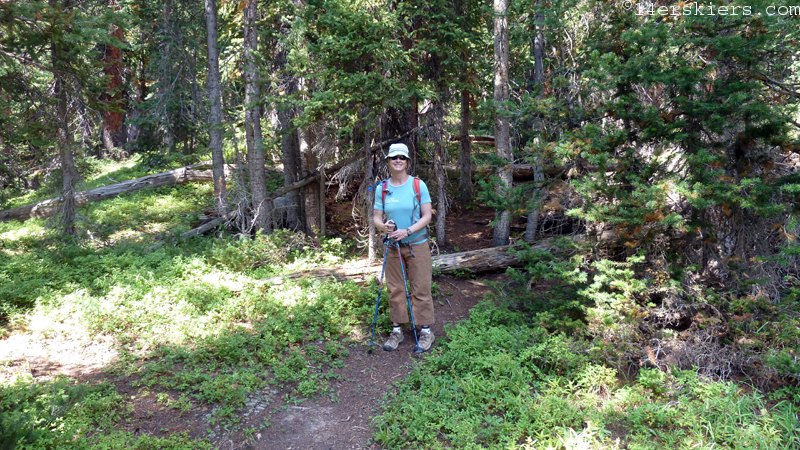 I don’t do as much hiking/climbing/scrambling as I used to, but I’m still prepared to put this route at the top of my list. The only route that is even in the same category is the standard route on Crestone Needle, but Avery was better- and it’s in our backyard! The rock is generally quite good- but you should still try to climb side by side and use extreme caution on the occasional ledgy areas. And of course, choose your day carefully, since this would be an incredibly uncomfortable place to be in a rainstorm. Ropes are neither warranted nor recommended since the protection options aren’t great and the rope would just as likely knock rock down on the belayer as anything else. Brittany was the smart one (well, she always is, right?) wearing a helmet on this climb.