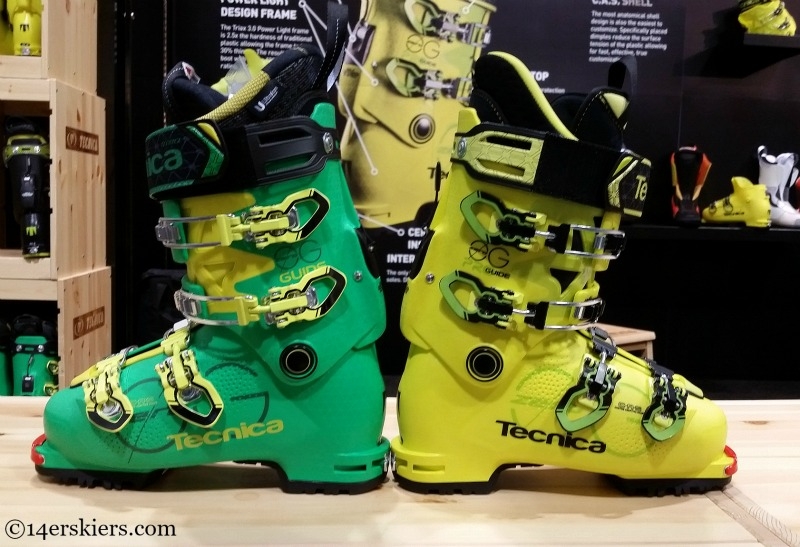 We’re not gonna sugar-coat it. But, this year’s SIA was a bit of a let down. There just weren’t very many products that made you go “Ooooh” and “Aaaah”. Not a whole lot of things stood out. And while innovation keeps infiltrating the ski industry, nothing was on the Thomas Edison or Ben Franklin levels of some SIA’s past.

That said, we spent a lot of time at SIA searching for things that made us happy. Here’s some things that caught our eye at SIA 2016.

I’ve been loyal to other boot companies in the past. But, Frank could be a Tecnica rep himself with the many generations of Tecnica ski boots he’s beaten into the ground in the past. So, we stop by the Tecnica booth every year, and every year I notice the careful thought and creativity that goes into designing their boots. This year was the final straw – I think they’ve finally won me over with the Zero G AT boot.

One thing to note is that the Zero G Guide Pro will come in Women’s sizes too, as their size range will be 22.5 to 30.5. Finally! A stiff AT boot women with small feet can wear!

The range of motion in tour mode on these boots is nothing to rave about, being a mere 44-degrees. But, 44-degrees is adequate for certain. To compare, the comparable Tecnica Cochise models have a 42-degree ROM. Tecnica is quick to point out that the ROM is where it’s needed – allowing for movement for in the front of the boot, and only what’s really needed in the back. Other boot manufacturers tend to put a lot of effort into allowing more movement in the aft of the boot, far past the point of where that motion is actually needed.

The Zero G boot is a step up from the Cochise. It’s 4-buckle with a powerstrap, whereas the Cochise is a 3-buckle boot with a powerstrap-buckle integration at the top. Furthermore, Tecnica has lightened up the shell by using bi-injection, making it both lighter and stiffer. Tecnica also learned from reports where the tour/ski locking mechanism in the Cochise models was getting worn out, allowing for a lot of play in the boot while in ski mode. They fixed this by creating a notch-lock system, where the pin will wear into the notch, causing a deeper notch, but not a wider notch, therefore not sacrificing the overall stiffness of the boot.

I personally can’t wait for Tecnica to start making my size in the Zero G boots so I can test them out!

Leki has a couple of nice additions to their poles coming out for next season. First, they have a Whippet-style pole. If the design looks familiar to you, then that’s because it is basically the same as the Grivel Condor. Leki has licensed the name and the design. So, now the Grivel Condor is the Leki Condor.

The Leki Condor has a retractable blade, which is nice because then you don’t have to worry about impaling yourself unintentionally when you’re skiing and don’t actually need to use the tool. 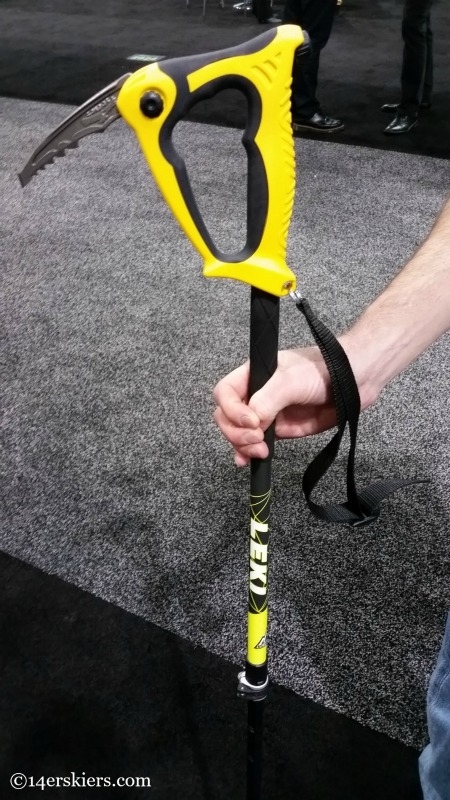 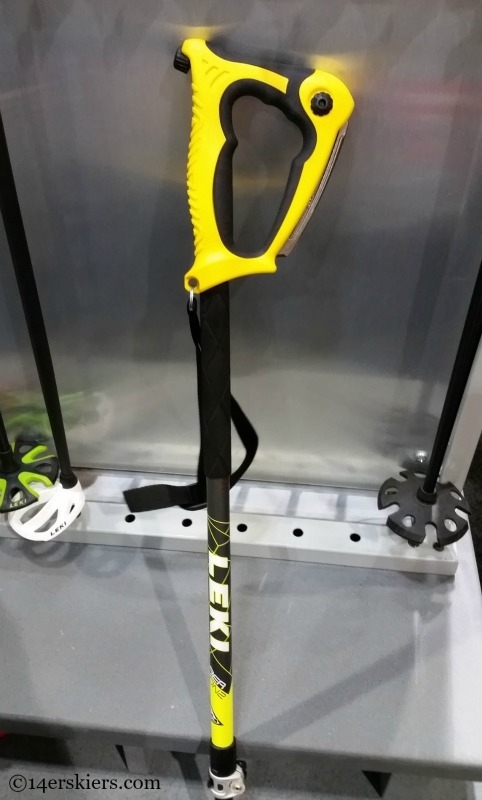 Furthermore, the Leki Condor comes with the new Vertical Trigger strap technology, and other poles will come with this technology too.

Leki is an innovator when it comes to designing poles with really unique strapping systems. This can help increase the speed of the swing of the pole, and the releasabilty of their straps helps prevent injuries like skier’s thumb. But, at the sames time, this releasability presents a problem – the strap can come off easily when the trigger is hit. That means you can lose a strap while loading on the chairlift, or by placing your hand over the top of the pole for additional support.

Enter the Vertical Trigger system. In this system, the trigger release is smaller and you pull on the lever instead of push it in to release the strap. That means that you’re less likely to release the strap unintentionally, as it is much more intentional to pull a lever outward than to push it inward. This video shows how the release mechanism on the Vertical trigger system works:

Additionally, the Vertical Trigger clip has elastic built in to allow for more movement. This is especially good for touring, as it allows you to be able to easily place your hand on the top of the pole without having to unclick out of the trigger.

We’ve told you about 2 out of the 5 things that caught our eye during SIA 2016. We still have three more to go! Check back tomorrow for the remaining products that piqued our interest!

Article Name
5 Things that Caught our Eye at SIA 2016
Description
A preview of the Tecnica Zero G AT touring boot, the Leki Condor self-arrest ski pole, and the Leki Vertical Trigger pole strap system, all of which caught our eye at SIA 2016.
Author
Brittany Walker Konsella