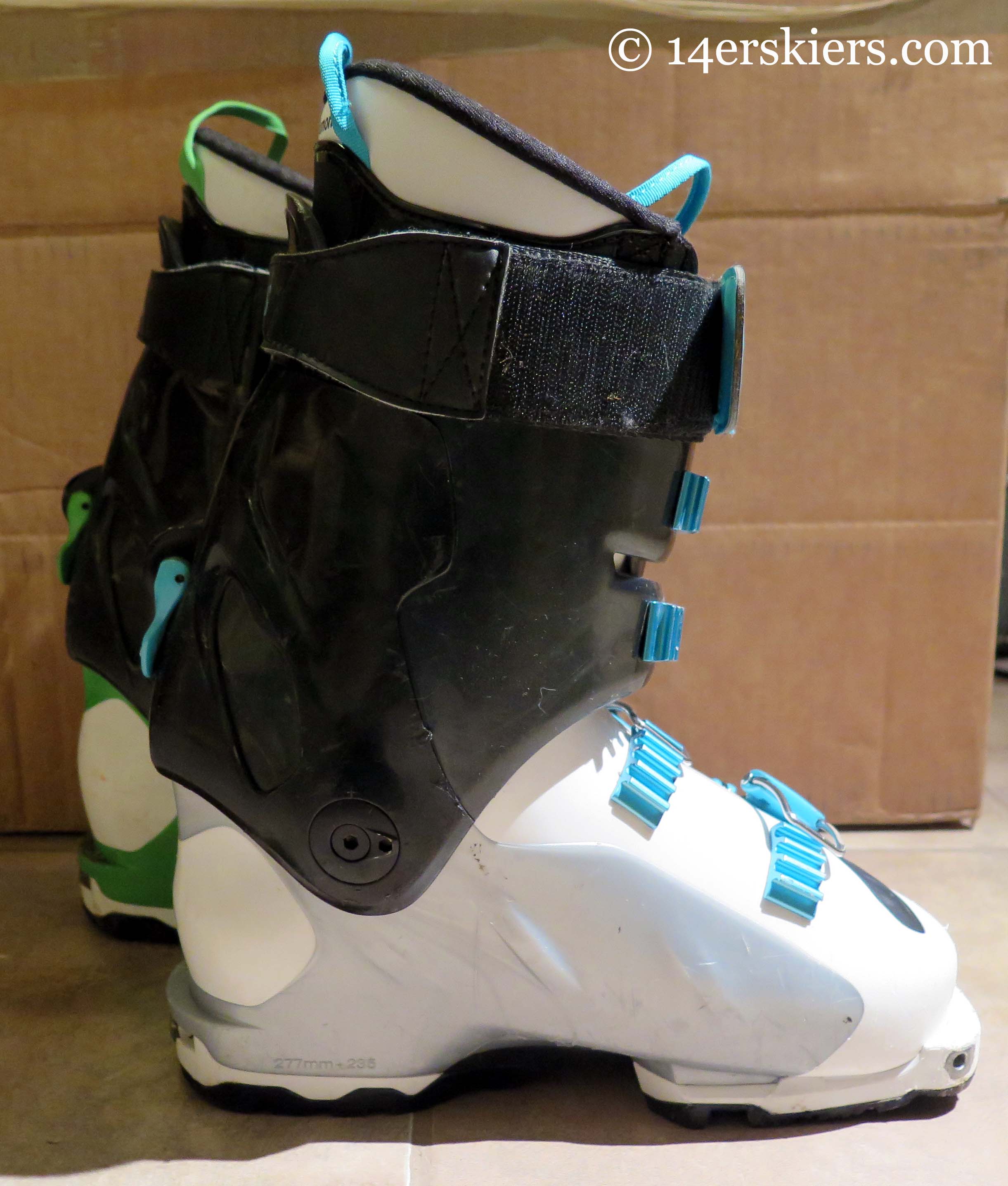 Frank recently reviewed the BD Factor MX. Here, I will review the 2014 Black Diamond Shiva MX freeride AT boot and compare it to its predecessor Shiva which I began skiing in 2011.

The Shiva is intended to be a freeride AT boot. It has been built as a stiffer AT boot that skiers can use both in and out of bounds. Sole blocks are available for both AT and alpine bindings.

Black Diamond has listed the flex of the Shiva MX to be 110 compared to the previous Shiva’s 100. While flex ratings are somewhat arbitrary, I feel that these ratings are fairly accurate compared to what I am used to in a true alpine boot. Either way, the Shiva MX is noticeably stiffer than the previous Shiva. Some of the improvements in stiffness are likely due to a higher cuff and a wider power strap. But, some of it has also to do with the plastic and structure of the boot.

First, when comparing how the sole blocks are attached between the older Shiva and the new, you can see that there are a lot more screws on the newer model. This means that the sole block is attached more solidly in more places. In addition, the screws on the MX are attached to a HeliCoil-style insert that is already embedded into the boot, instead of being screwed directly into the plastic. Additionally, these screws penetrate deep into the boot. The result of all of this is that the sole block moves more with the boot instead of separate from it, decreasing the small amount of play that can occur with removable sole blocks.

In addition, the heel of the sole block is designed differently. The top of the heel piece is actually still a part of the boot, which means that for a standard-frame binding, the binding is attaching to the actual boot and not the actual removable heel piece. This concept applies largely to a tech-fit style heel too as the tech-fit piece actually attaches between the boot and the heel attachment – and the place where the heel locks for the tech-fit attachment is actually also on the boot itself, not the sole attachment. Again, this reduces play in the boot that can be caused by removable sole blocks, allowing for quicker response, therefore increasing the overall performance of the boot.

I loved my original Shivas, and I still do. Until the Shiva Mx, they were the best AT boot I’d ever skied. But, my main complaint was always their touring mode. While the Shivas were fine touring uphill, touring on flat or down-sloping terrain was difficult. It was also difficult to walk downhill in them. This was because their touring range was limited, especially in the aft position. But, Black Diamond fixed this in the Shiva MX. The improved motion is noticeable right away.

Both the older Shiva and the Shiva MX come with micro-adjustable buckles. But, the buckles on the MX are 30% lower profile and therefore lighter. However, buckle durability was improved on the MX by having them attach to two points on the shell, rather than one. The buckles on the MX also have smaller spacing between the adjustments, which is nice sometimes for adjustability. My only complaint is that there is a rather sharp curve on the top of all the ladder notches, especially for the touring-mode rung. The bail actually gets stuck a little too often in these rungs and it can be annoying at times when transitioning.

The Shiva MX has discernibly less forward lean when in ski mode compared to the original Shiva. This is keeping up with a more industry-wide transition where freeride boots are built with a more upright ski position. It is my personal opinion that this helps people drive turns from the middle of the ski rather than the tip – which is also a transition I have been feeling in skis too. I still prefer a more traditional lean, however, overall.

The Shiva MX came stock with a forward lean of 18°, but can be adjusted to either 22° or 14°, depending on preference. Adjusting the forward lean position is a bit of a pain, especially compared to the older Shiva. But, with a few tips, it doesn’t have to be hard. So, if you need to adjust the forward lean position, make sure you read our post on how to do it. It could save you some headaches and keep from you having springs bouncing around everywhere like we experienced 😉

I tried all three positions and I found the 14° to be basically impossible to ski. I didn’t like the 18° position either, but I did find the 22° to be tolerable. I still would like a bit more forward lean. But, I feel that the lean could be adjusted with a heel riser under the foot bed and/or a spoiler in the back cuff of the shell.

Again, this forward lean is just a personal preference. I grew up skiing in boots that had a pretty aggressive forward lean overall. So, that is what I am used to.

Finding a boot that fits you right is one of the hardest things. I have a fairly low profile, but wide, foot and narrow ankles and calves. I also have a small foot (my alpine boot is actually a size 22.5). The Shiva has always fit most of these aspects of my foot/ankle/calf profile. But the MX fits even better.

The most perceptible improvement is in the heel. The boot has a deeper heel pockets and fits tighter around the heel, decreasing heel movement and the chances of developing those pesky bone spurs. The improvement in the heel is remarkable.

The removable toe blocks between the two Shiva models are a bit different. The older Shiva has a slightly more rounded shape. The Shiva MX is a tad boxier. I believe this is the reason why I find it easier to step into tech bindings using the Shiva MX over the older Shiva.

Like I said before, I loved my Shivas. But, I love the Shiva MX’s even more. With improved stiffness and performance, a better fit, and much better touring mode, the MX is a great AT boot that can transfer well into skiing the resort as well. My only suggestion for improvement would be to alter the buckle system a bit to reduce the likelihood that the bails get stuck on the ladder. Otherwise, I am happy to say that this boot skis with high performance, but is light and comfortable for long tours. The Black Diamond Shiva is a great boot – the best AT boot I’ve ever skied!