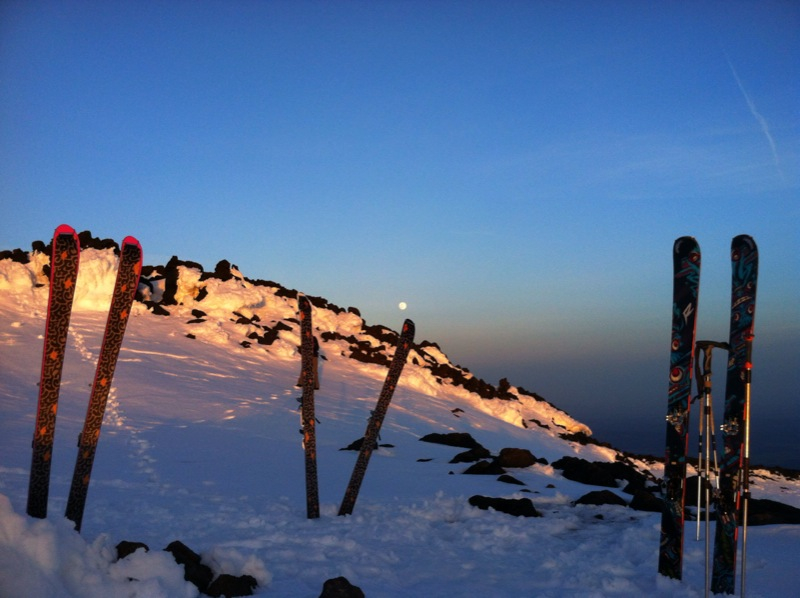 On May 8th and 9th Zach, Cam and I climbed and descended Mount Adams, Washington. In stark white, Mount Adams sits among other classic Cascade volcanoes: Mount Hood to the south, Mount St. Helens to the west and Mount Rainier to the north. I had not met the Cascade Volcanoes before. They stand towering like magistrates; humbling those beneath them and keeping eyes on their brood of rolling blue hills that unfold like the sea at their feet. 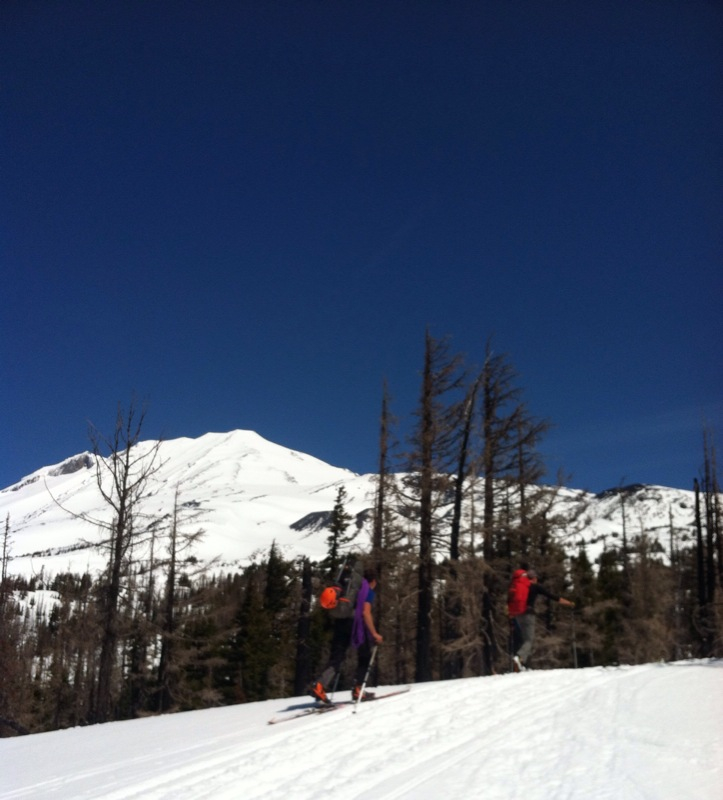 I got my first glimpse of Mount Adams from our camp spot before we began. Much of the lower mountain had sustained a forest fire in 2012, so the forest did not hide the mountain—she stood proud. My head cocked back, me eyes widened and my jaw fell open. There she blows! 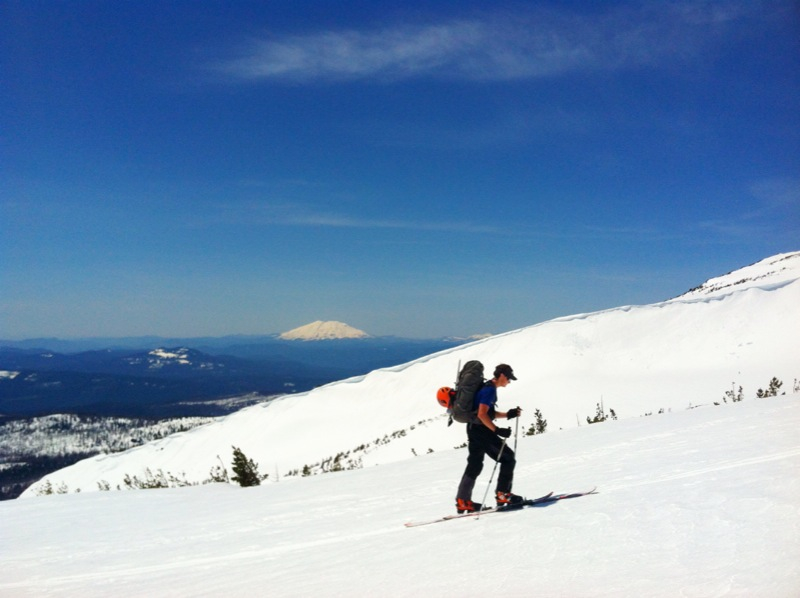 The first day, we skinned about two-thirds of the way up Mount Adams. At the start our climb, we skinned out of the burn-zone into a green sub-alpine forest where the sweet taste of spruce and fresh cedar flooded every breath. The scent hung in the air like Christmas morning, conspicuously sneaking into your nostrils. Sadly, the smell was slowly replaced by sulfur as we zig-zagged up past tree line and entered ‘Volcano Planet’—filled with rocks and snow. Breezy, barren and home for the night. 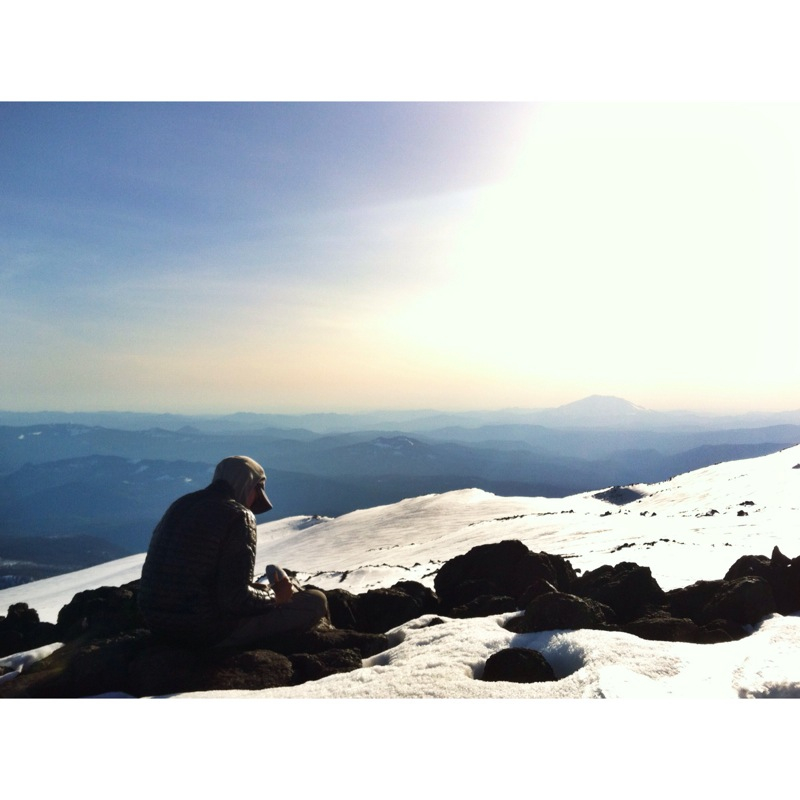 After a pleasant night spent under a full moon, the three of us awoke at four to get started for the day. The sky was purple already—another clear, warm, sunscreen-every-hour type of day opening its eyes.

Donned with crampons and ice axes, we climbed and climbed that morning—the wild blue hills and the bustling world beneath growing farther and farther. As I neared the top of the first headwall, I began to feel weary. More weary than I would expect to be. I continued to pump water and granola bars into my body, knowing that with each step I was closer to the top and closer to the down. My feet hung heavy off of my legs, swinging almost carelessly into established tracks. As I crested the first headwall, the final thousand-foot climb stood before me.

I took a seat on my pack for a moment, gazing out to our beginning. “You’ve made it this far,” I thought, “The snow is still firm, the sun hasn’t touched it yet. You have time to make it to the top safely. You can do it. Slowly, you can do it.”

Zach and Cam sensed my fatigue and stayed behind me, allowing me to set the pace. I was burned, and beginning to feel light-headed. We trudged, we paused, I panted, we marched on…until I began to lose my balance. The first time I fell I snagged my crampon on my pant leg and tripped to my knees. “No biggie, it happens,” I thought, staggering to my feet. We marched on. Then I started stumbling more frequently, and my dizziness was not subsiding with water or food. At this point we had reached almost 12,000 ft in elevation and were within about 500 vertical feet of the summit. We were so close. “I’m from Colorado! I have spent my whole life at 8,000 feet! I don’t get AMS!” I joked. But apparently, I do. Zach was kind enough to escort me down a few hundred feet to a position where we could still keep eyes on Cam as he pushed for the summit. 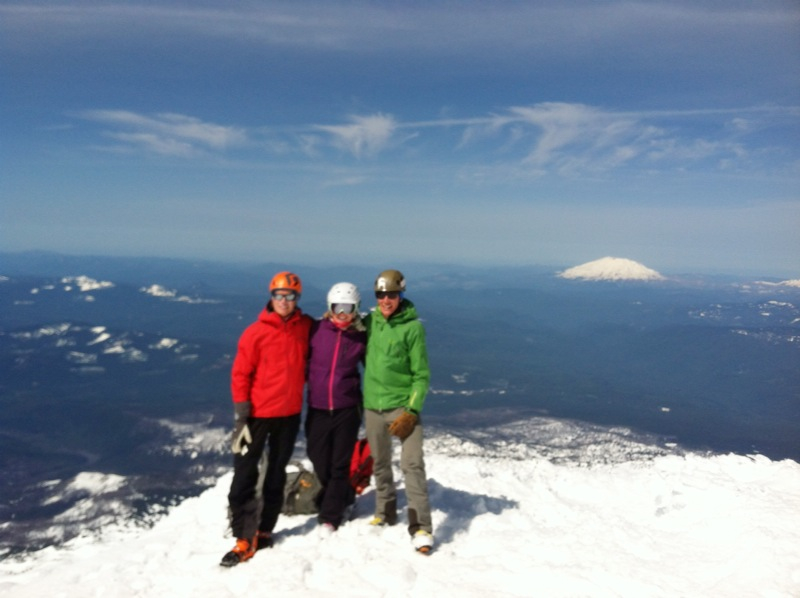 Lucky for me, the top of our line, the SW Chutes, was a few hundred feet lower. After some rest, we geared over to skiing, which (of course) was instantly rejuvenating. Over 8,000 vertical feet of turns (okay, and some trudging too) back to the car!

Right off the bat, we dropped into 3,000 feet of perfectly warmed, wide-open corn. The snow was perfectly even, edgable, soft and stable. Bliss. It was the carefree, wind-in-your-hair, springing from turn-to-turn type of skiing that dreams are made of. 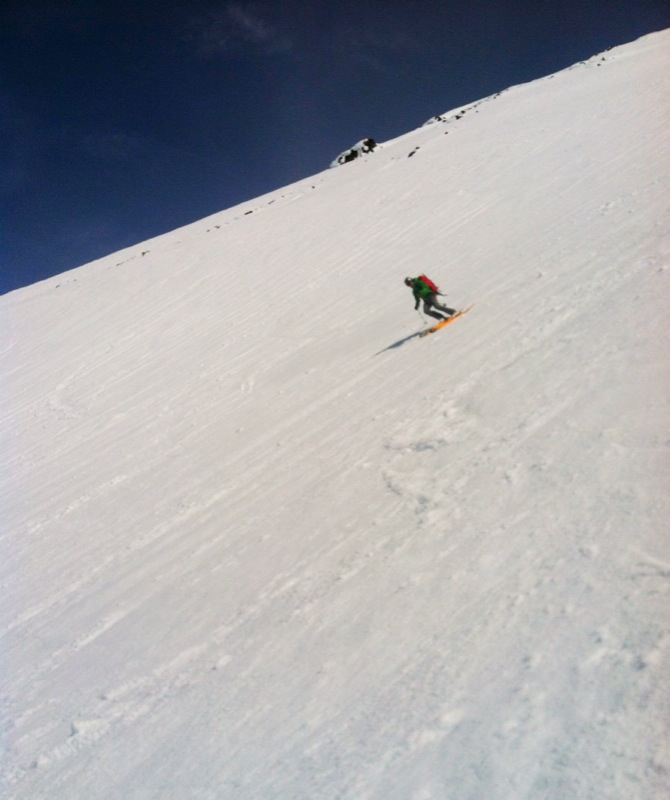 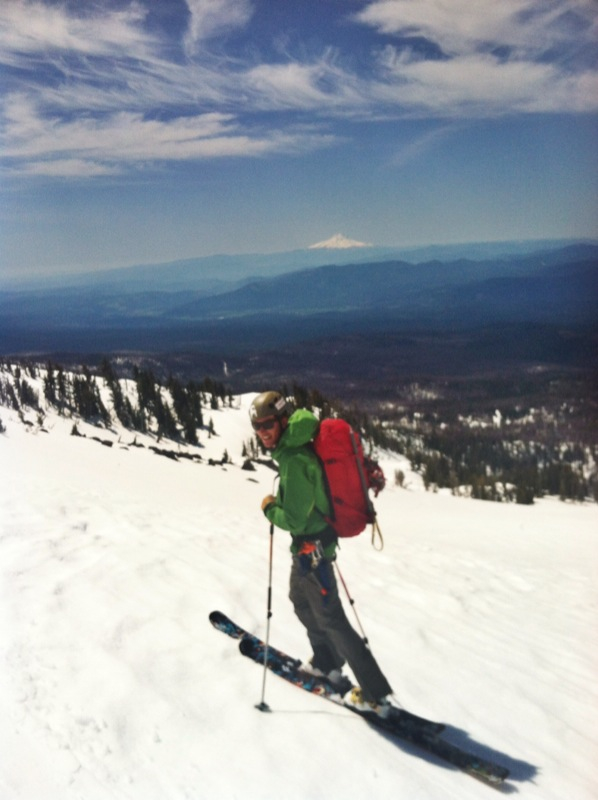 As we worked our way down and back into the trees, the skiing became a bit more sloppy…as one could expect from temperatures in the fifties. We wound our way through the burnt forest, grins as big as the crescent moon on our faces. Body aches and sunburns were no worry at all. The turns were spectacular, the climb was beautiful and dang it, I want to see that summit! I’ll be back for you Mount Adams!

Grete Gansauer grew up in Colorado loving the outdoors.After living in Crested Butte for a year, she found herself in Salt Lake City. She continues enjoying an athletic life by wandering the country in pursuit of outdoor adventures.

Grete Gansauer grew up in Colorado loving the outdoors. After living in Crested Butte for a year, she found herself in Salt Lake City. She continues enjoying an athletic life by wandering the country in pursuit of outdoor adventures.