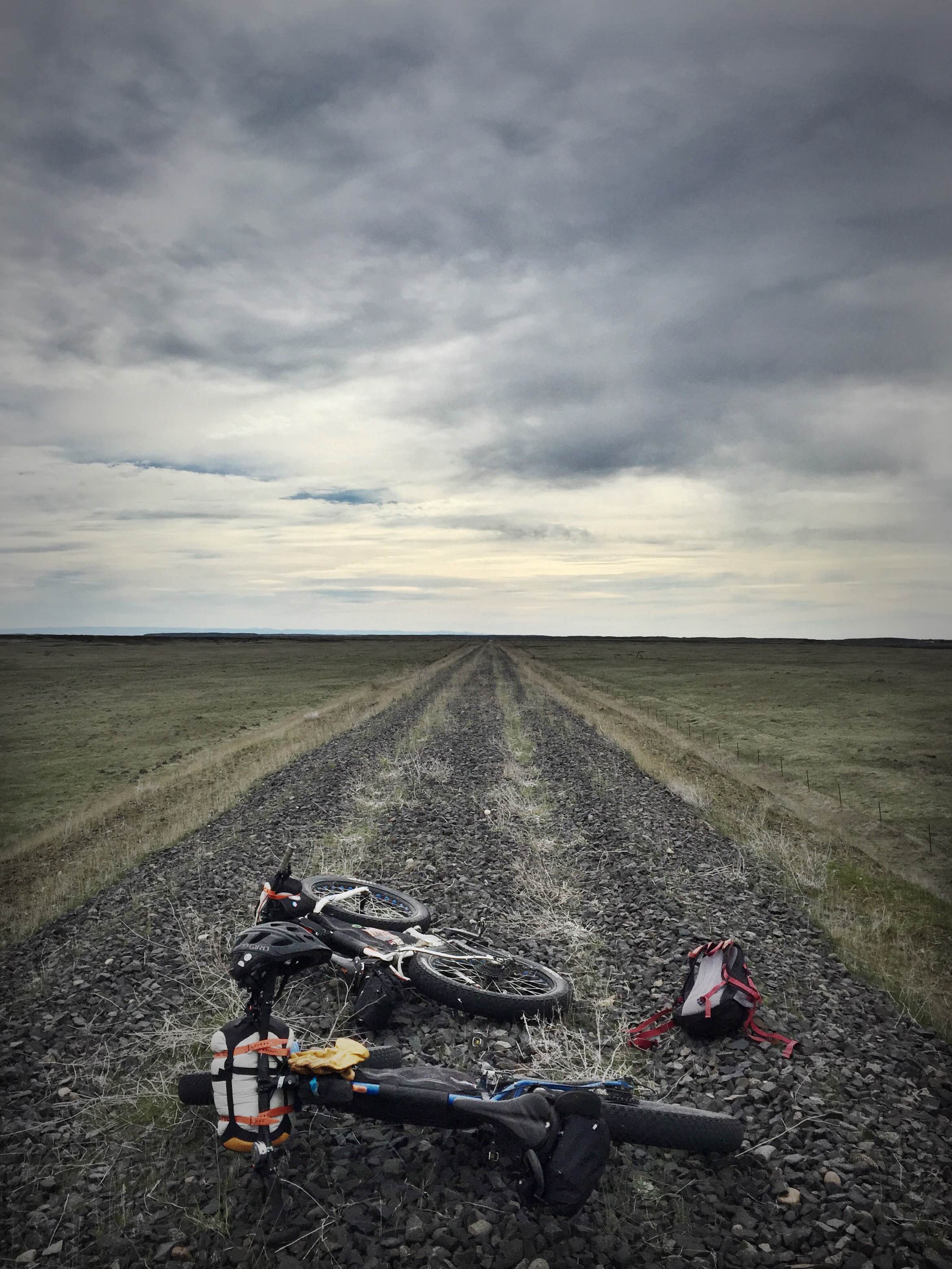 As I unloaded my bike from the train in Spokane, Washington at three o’clock in the morning, the question “what do we do now?” came to mind. I had begun pondering this issue two days prior when my ever-adventurous fiancé Zach came up with an impromptu “rails-to-trails” fat-bike-packing trip across eastern Washington. The plan was to begin by taking the train to Spokane with our fat bikes (arriving at, ahem, 3 a.m.), pedaling a converted railroad bed 150 miles southwest to the tri-cities, then grabbing the train east from Pasco, Washington back home to Whitefish, Montana. 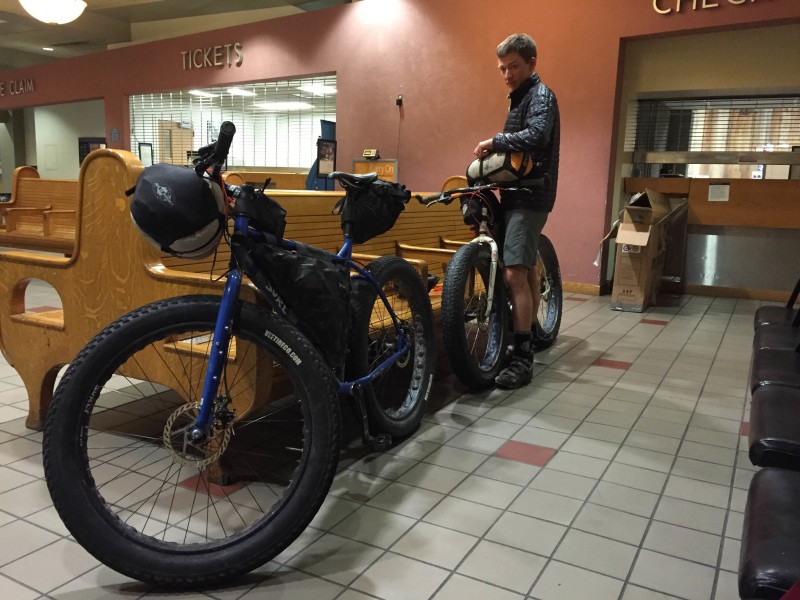 So there I was in Spokane, beginning our journey as the lone pig-tailed white girl amongst a horde of nocturnal train station loiterers. Ah, the florescent glow of 3:30 a.m. The shadow people wearily stirred, lighters flicked aflame and a draft sent crumpled up Cheeto bag cartwheeling past my feet like a tumbleweed. Blending in and curling up on a filmy bench for the next few hours was officially not an option. “Let’s pedal out of town,” I said to Zach. “Let’s get out of here and into the woods!”

Navigating by smartphone we wound our way to the edge of Spokane where we caught a bike path, then a lonesome highway for 15 miles. We arrived at the trailhead of the Columbia Plateau Trail just before sun up. The CPT is part of the nation-wide Rails-to-Trails conservancy that transforms abandoned railroad tracks into bike paths. It’s a very cool idea that, unfortunately in this case, is very far from being fully developed. More on this later…but for now, a preview: 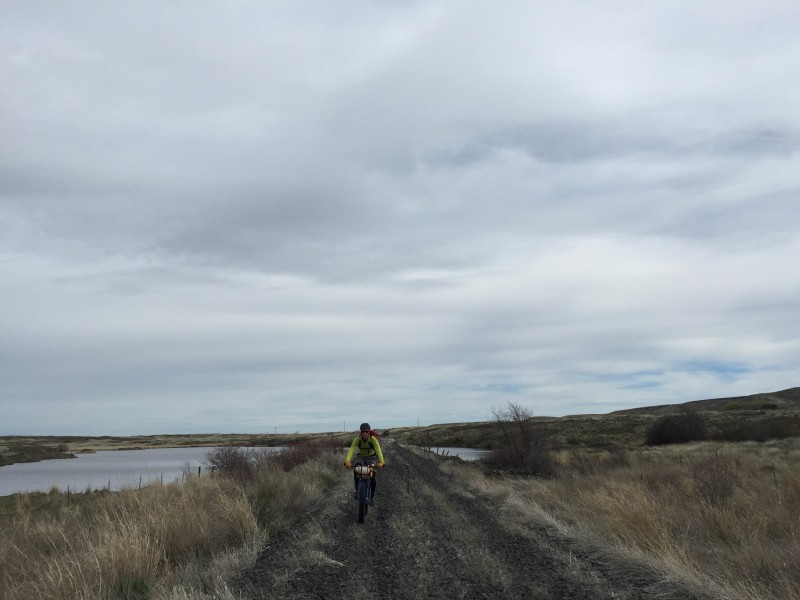 After stocking up on food in a nearby town, we began what would come to be the most pleasant 20 miles of the trail. The beginning of the trail is developed pavement and dirt road riding and made for very easy and enjoyable riding through Turnbull Wildlife Refuge: 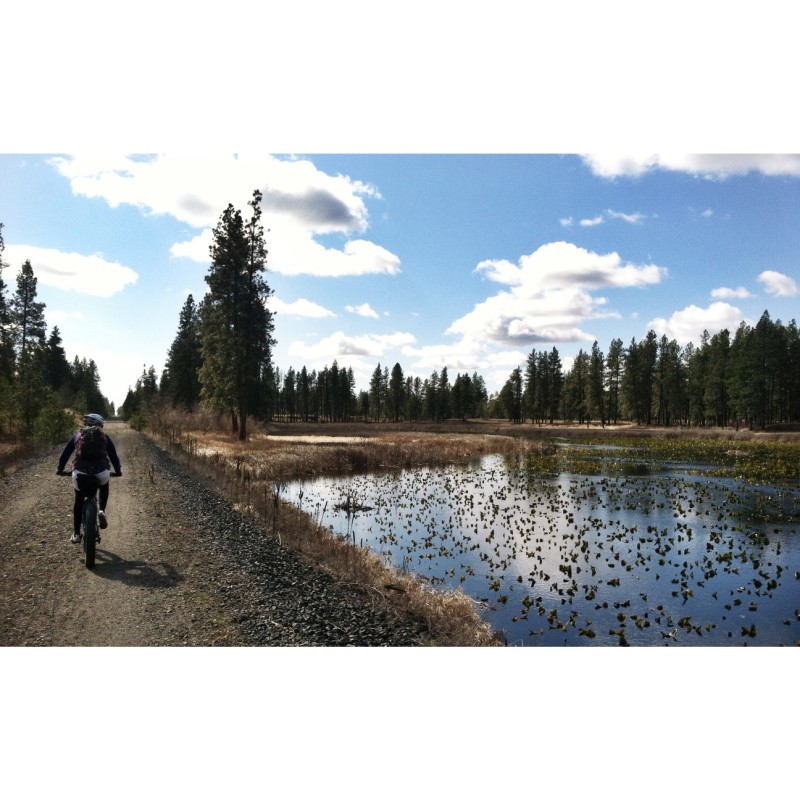 As a skier, mountain biker and self-proclaimed ‘mountain-girl’, I have not given myself much time to spend amidst the vast grasslands of the American West. Through the window of a car, the plains go by too quickly (or perhaps too slowly, if you’re trying to make it all the way across Kansas) to heed the intricacies and simple wonders they hold. But on a bicycle, rangelands blossom into surprisingly beautiful and diverse landscapes—the large number of bird species we encountered during our trip was a veracious testament to the value of preserving our grasslands (and wetlands) as habitat. And this is the unique magic of traveling on a bicycle: bicycling can transform an austere place into a fascinating and challenging one. 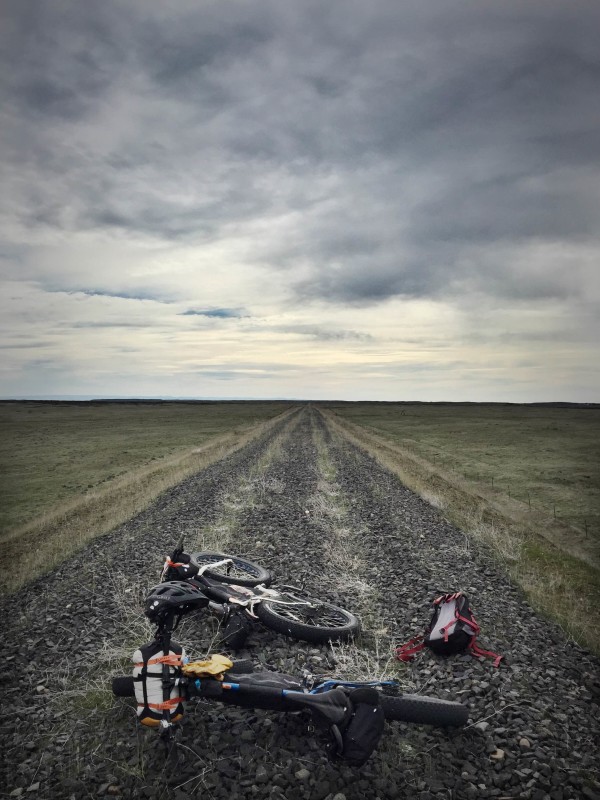 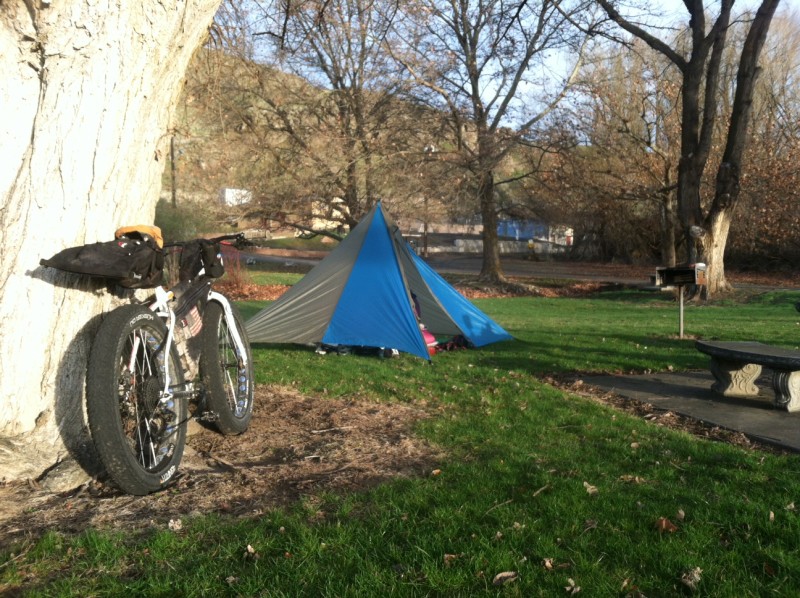 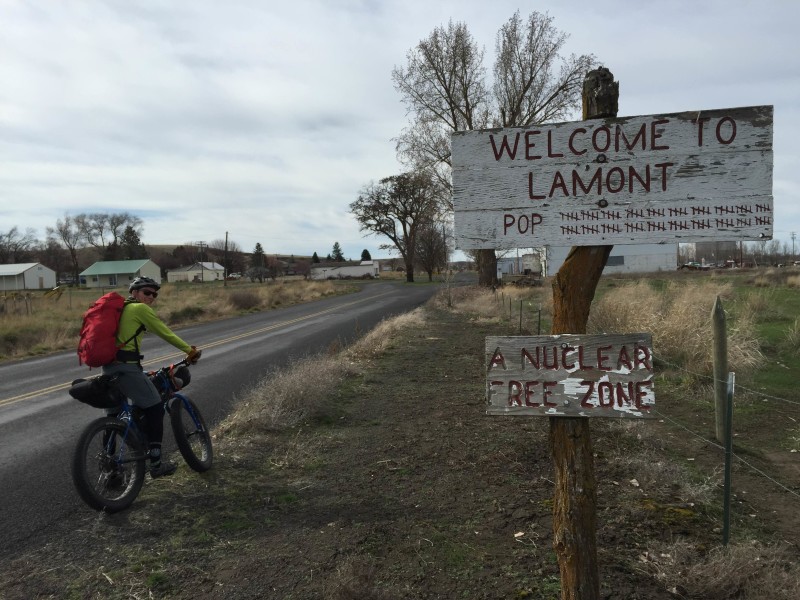 Oh, the delicious challenge we encountered over those few days on the Columbia Plateau Trail! After a pleasant beginning to the ride, on day two the trail abruptly turned to undeveloped railroad ballast…and stayed that way for the next 92 miles. That’s right: the next 92 miles of “trail” were to be a challenging mix of loose rocks and—oh yes—completely overgrown weedy portions. 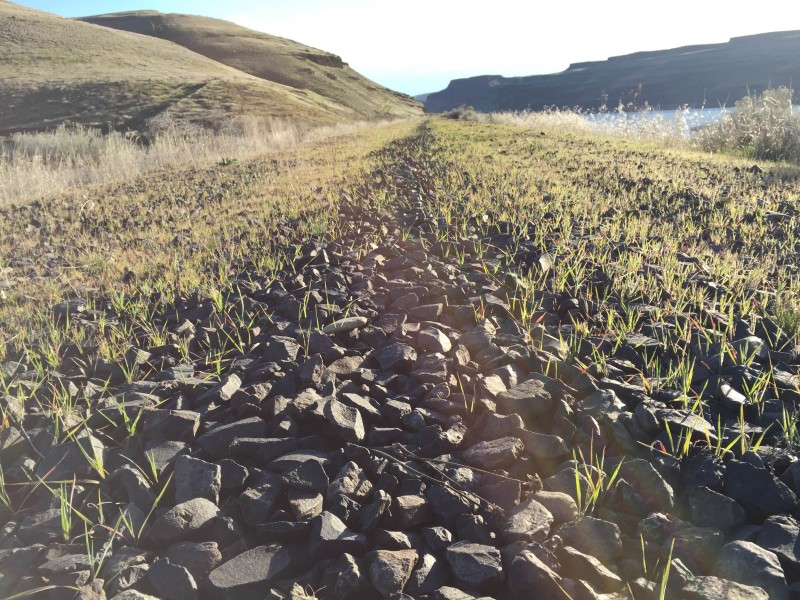 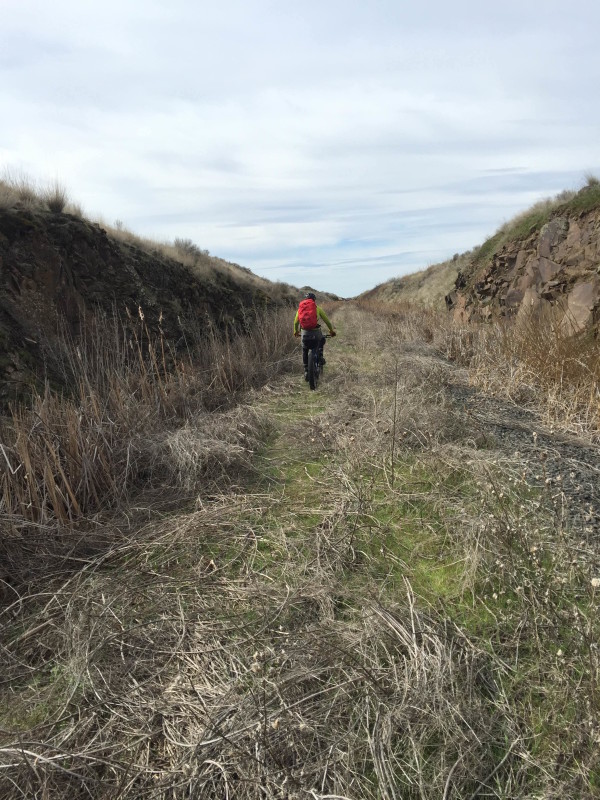 I actually grew to be thankful for the bicycle-bushwhacking because it provided a more cohesive and consistent riding surface than the ballast, which felt more like riding through sand with grains the size of fists. No amount of chamois butter or padding can protect you from the unrelenting butt-pummeling that is riding on an abandoned railroad track. The fat bikes were definitely a good choice for this surface, however, I am not convinced that any bike has the power make railroad ballast fun for 92 miles. 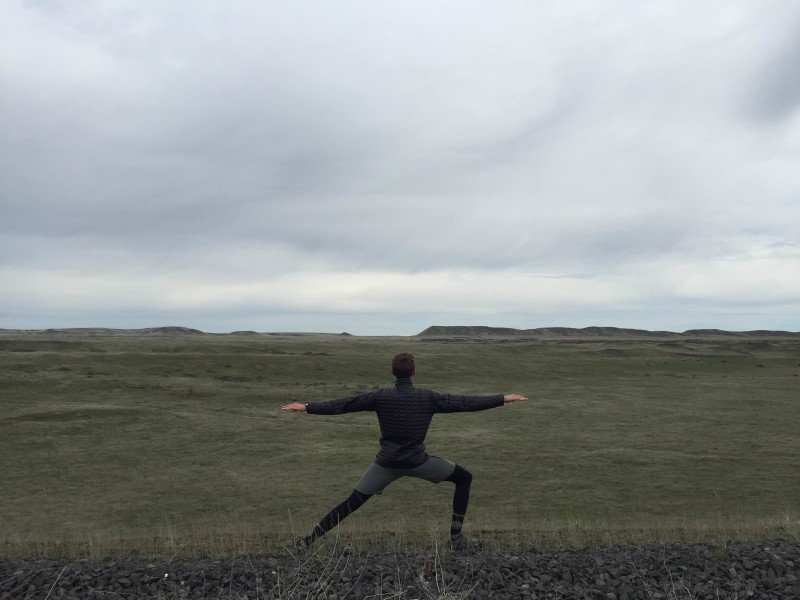 So it was with smiling butts that we welcomed the opportunity to take a road detour when we stumbled upon the scant farm town of Benge, Washington. From Benge, we linked seldom-traveled county roads to the tiny towns of Washtucna and Kalotus and eventually re-joined the CPT on the Snake River where the trail was developed again. Sidenote: the highways out there were very well maintained with great visibility and wide shoulders—eastern Washington offers many beautiful options for road-touring and welcoming small towns if you ever get the chance! 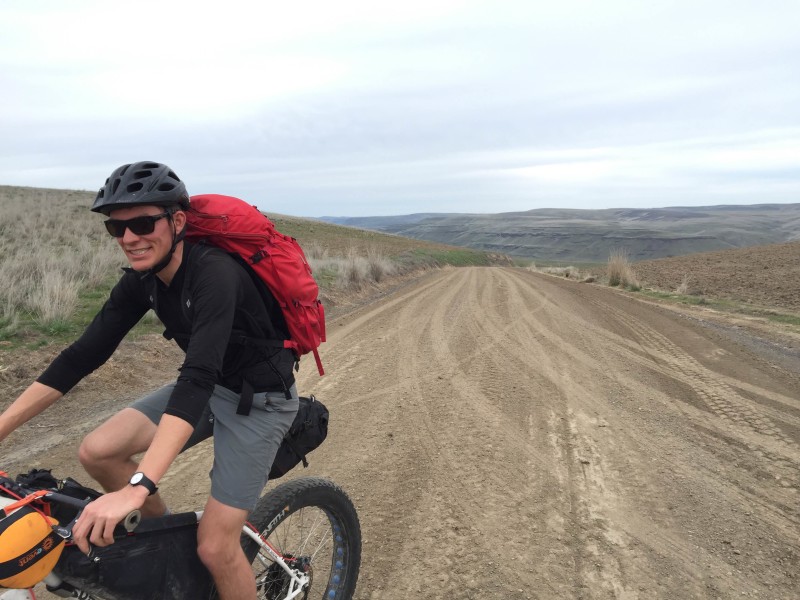 Our road detour also allowed us to skirt a couple of suspicious gaps in the map we downloaded…which turned out to be unmaintained and impassable bridges that were blocked off with barbed wire. This lack of development is a shame, because this ride would surely be a hidden gem of the PNW if this trail were, well, a trail. So, roadies, keep an ear out for the day the CPT gets paved. Then ride it from Pasco to Spokane (lest you battle the relentless westerly headwind we encountered, whom I named “Goliath”). 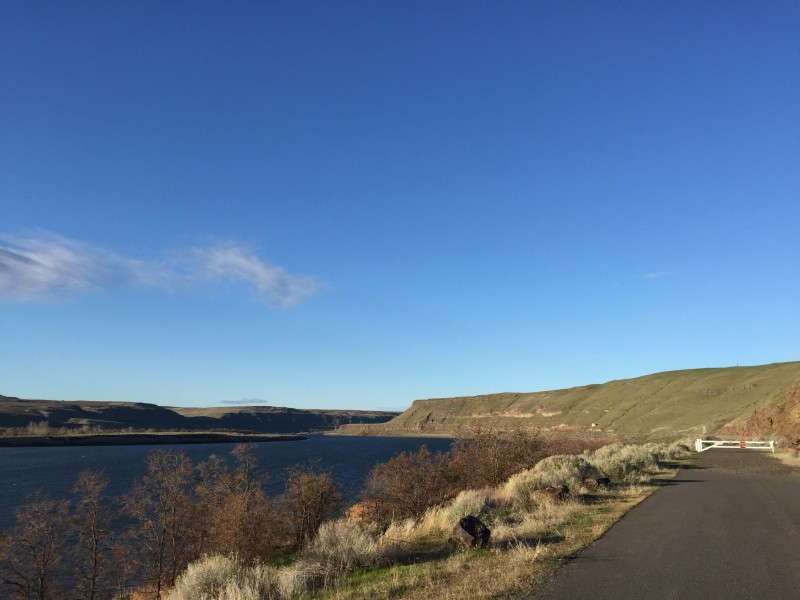 Our four days on the Columbia Plateau Trail were as unforgettable as they were, surprisingly, enjoyable. Truly, the trip was a beautiful reminder that things are not always as they seem: The vast rain shadow of eastern Washington is far from empty—it is full of diverse plant life, interesting geological history and the vivid music of many birds. Similarly, a flatland trail with a total elevation change of less than 4,000 ft over 150 miles is, apparently, far from our idea of a facile vacation—it is a savory trial of perseverance and, now, a fond memory.

Zach’s story and pictures from our trip can be found here.

Grete Gansauer grew up in Colorado loving the outdoors.After living in Crested Butte for a year, she found herself in Salt Lake City. She continues enjoying an athletic life by wandering the country in pursuit of outdoor adventures.

Grete Gansauer grew up in Colorado loving the outdoors. After living in Crested Butte for a year, she found herself in Salt Lake City. She continues enjoying an athletic life by wandering the country in pursuit of outdoor adventures.

One thought on “Bike-Packing TR: The Columbia Plateau Trail- The Road Not Traveled”