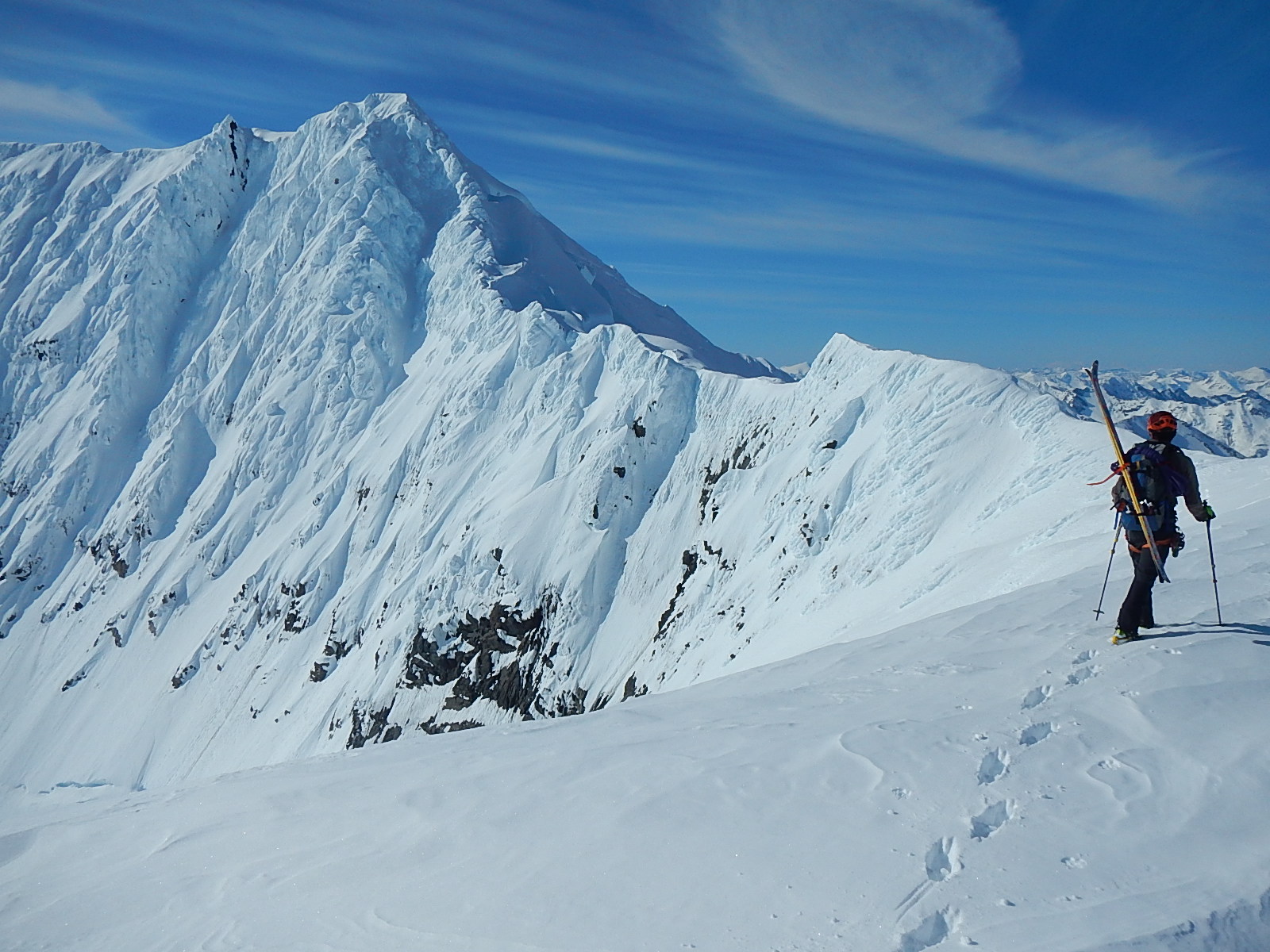 Carpathian, the name is filled with intensity and intrigue, but where does it come from? Does it come from the Carpathian Mountains of Romania, perhaps the mythical super humans that inhabit them, or maybe an Indo-European root word for rock? No one seems to know. Regardless, the mysterious power of the name embodies the mountain. Storms pouring into Turnagain Arm from the Prince William Sound pound the Kenai Peninsula’s tallest mountain with precipitation – rain, snow, ice. The extreme weather and the seracs, avalanches, and glacier hazards that it bringswith means that it often takes two, three, even four attempts to get up and down Carpathian.

Back in late March, Malcolm and I decided to check it out. Due to my usual early morning grogginess, the day started out as a bit of a shit show. I forgot the appropriate allen key to adjust my crampons for my new boots, and my camera was definitely missing its SD card. But, after a refueling stop for power rings (donuts), we were on our way across Portage Lake. Due to its proximity to the coast, the lake is often a nightmare – a wind tunnel of ice fog and ground blizzards. We got lucky, finding calm wind and fast, firm snow. 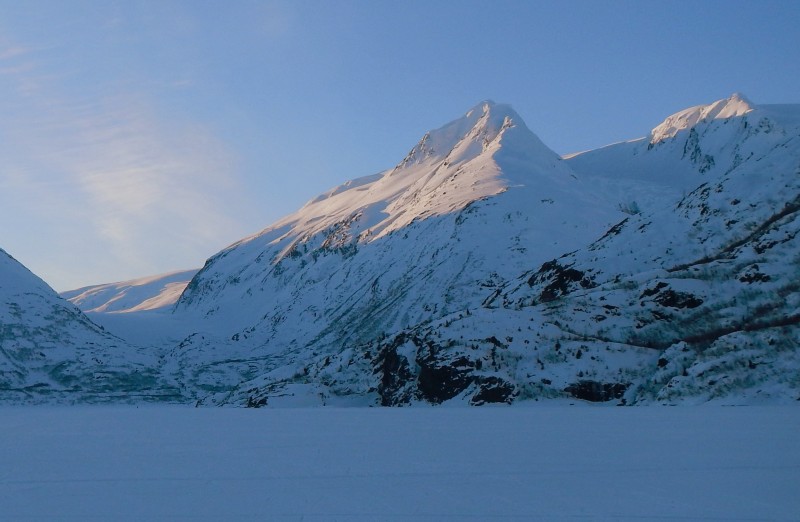 Three miles later, our faces covered in a fresh layer of rime, we were across the lake and at the base of the Portage Glacier:

Following the advice of a friend, we continued past the toe of the glacier, then climbed one of the lateral moraines which brought us past the terminal ice fall. As we moved up the Portage more glaciers came spilling down towards us. 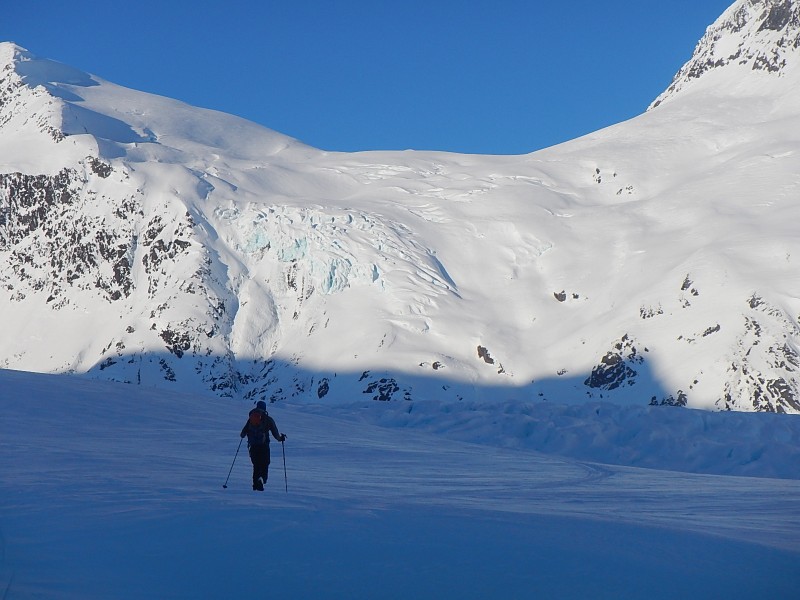 After a few more miles we roped up, threading our way through the crevasses and holes. Malcolm running up through a gap in one of the ice falls: 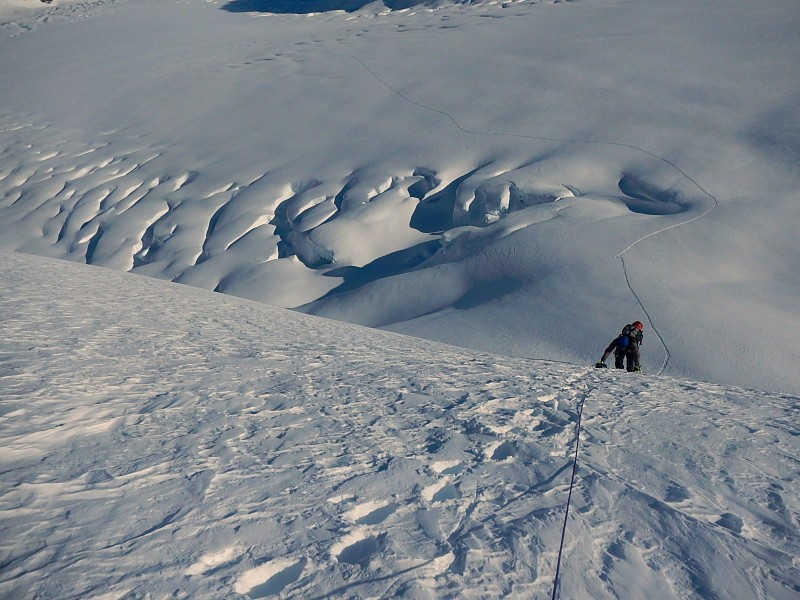 After negotiating another ice fall the summit pyramid came into view. The exit couloir from the hanging snow field is not visible in this picture. It exits through the rocks just lookers right of the large hanging serac. 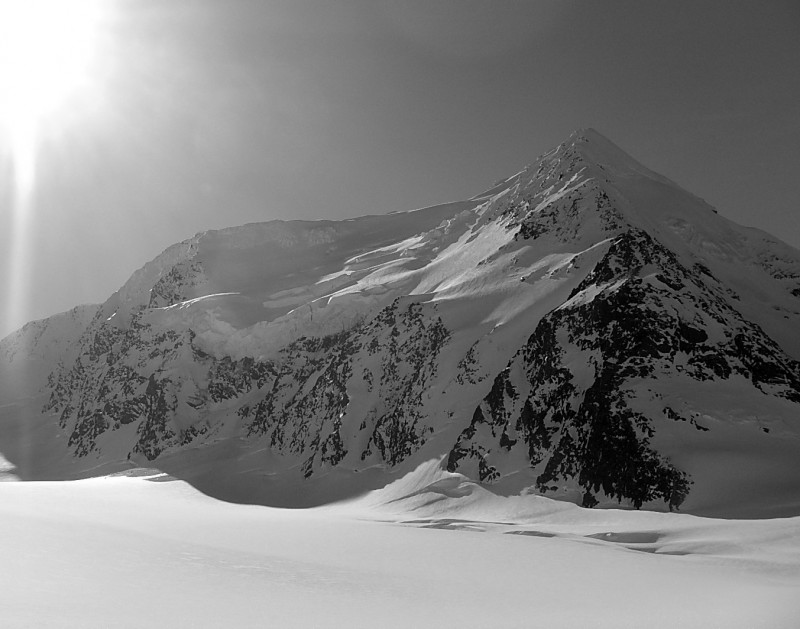 Feeling the pull of the mountain, Malcolm surged ahead; he is so fast, something I was quickly reminded of by the rope/tow strap between us. 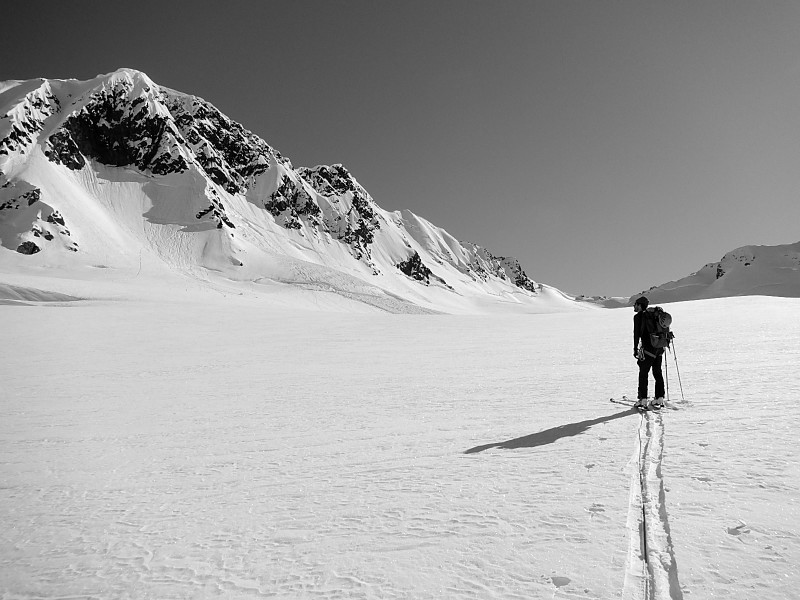 We passed under the huge north face of Carpathian following a narrow pass towards the northeast ridge. At the pass, the ice field and Blackstone Glacier unfolded beneath us.

From there, we followed the northeast ridge towards the summit. Covered in firm rime and snow, the exposed ridge was fast and fun. 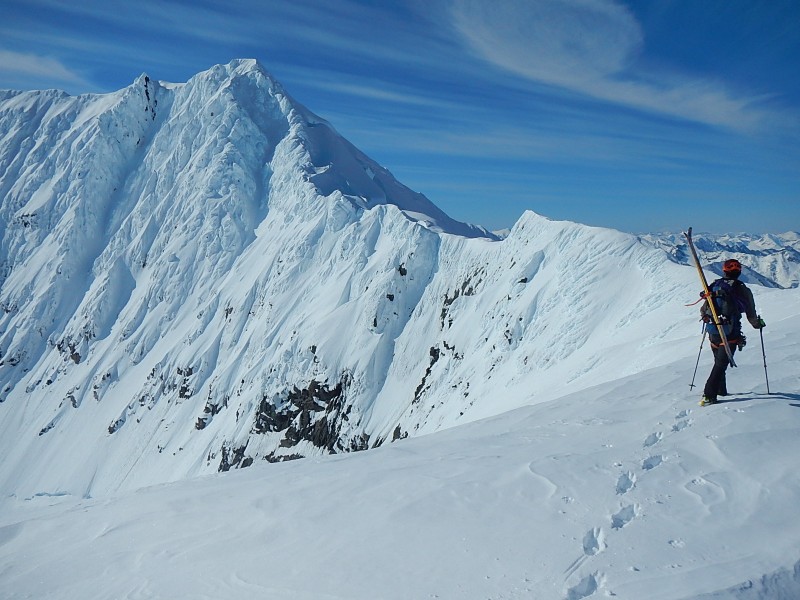 100 vertical feet below the summit we moved back onto the north face, belaying each other across one last sagging crevasse before the final climb. Of course, the last 65 degree push to the summit was shiny and hard alpine ice complete with a frustratingly rotten layer below it. Hoping we’d find soft snow somewhere, we brought our skis to the top. 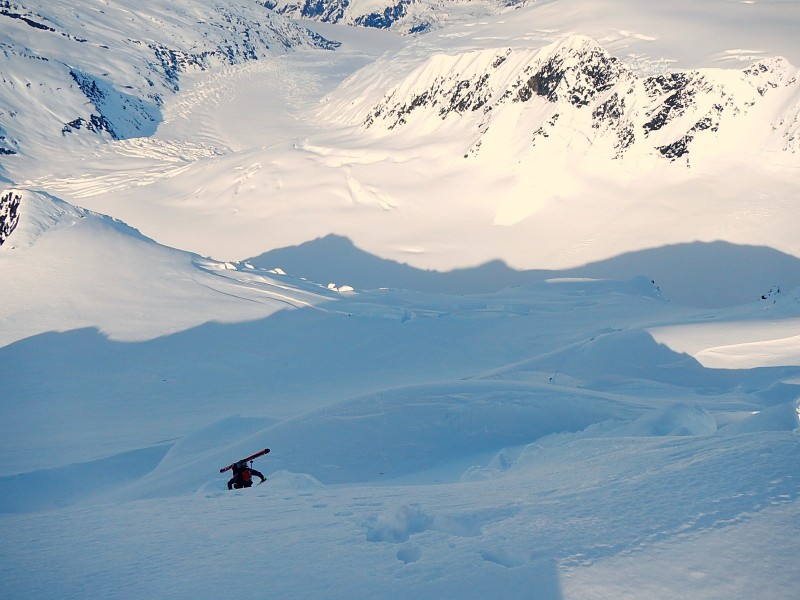 Popping out on the summit, it was much smaller than I expected. Its just a few feet wide and 50 feet long, falling thousands of feet to the ice field on one side and Skookum Glacier on the other. Knowing we still had miles ahead of us we briefly took in the incredible views of Marcus Baker, the Prince William Sound, and Isthmus peak, to name a few. 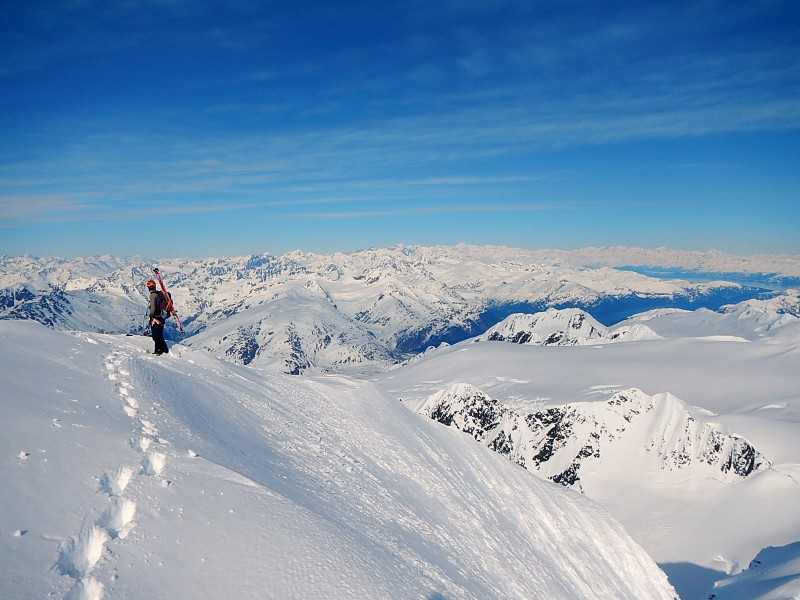 Skiing rock hard 65 degree ice above open crevasses, seracs, and thousand foot cliffs was out of the question. So, we began the tedious process of climbing down the final 100 feet. This process was mentally exhausting for me. At least I had an ice axe, Malcolm had forgone his ice axe for a whippet. But, Malcolm is Malcolm, and was unphased. After the downclimb we put on our skis and approached the first bergschrund crossing. I jumped it first, with Malcolm bringing up the rear. 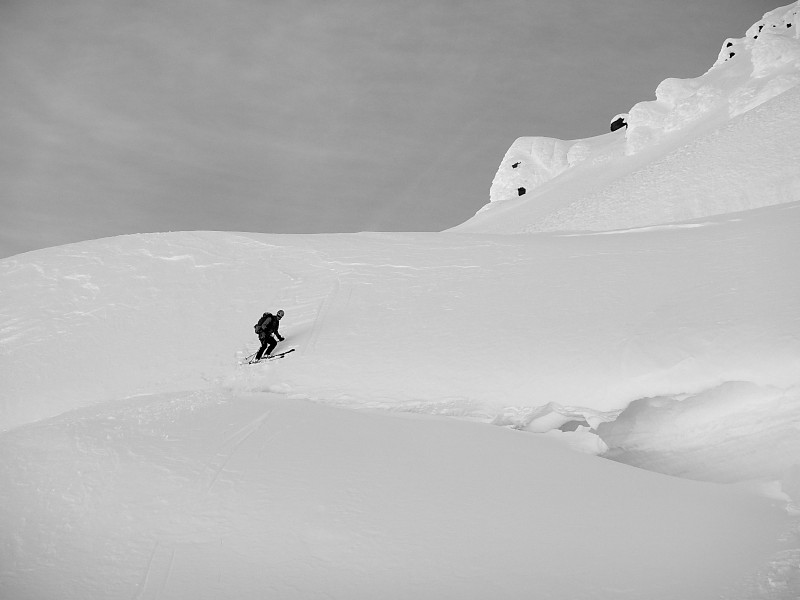 The next 1,000 vertical feet was intense: equal parts chalk and gnarly ice. Navigating the ice through open and bridged crevasses was…rough. 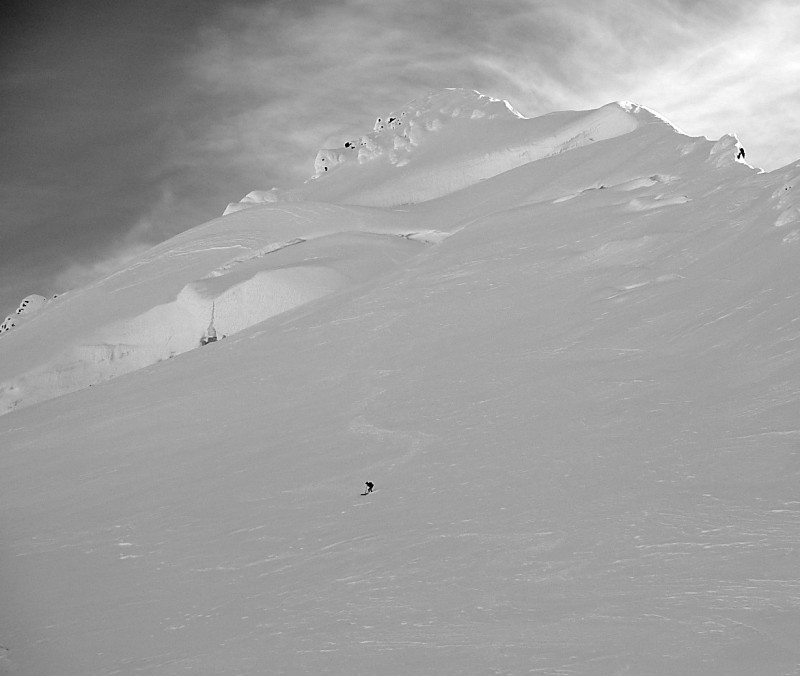 Stoke or relief? Both? 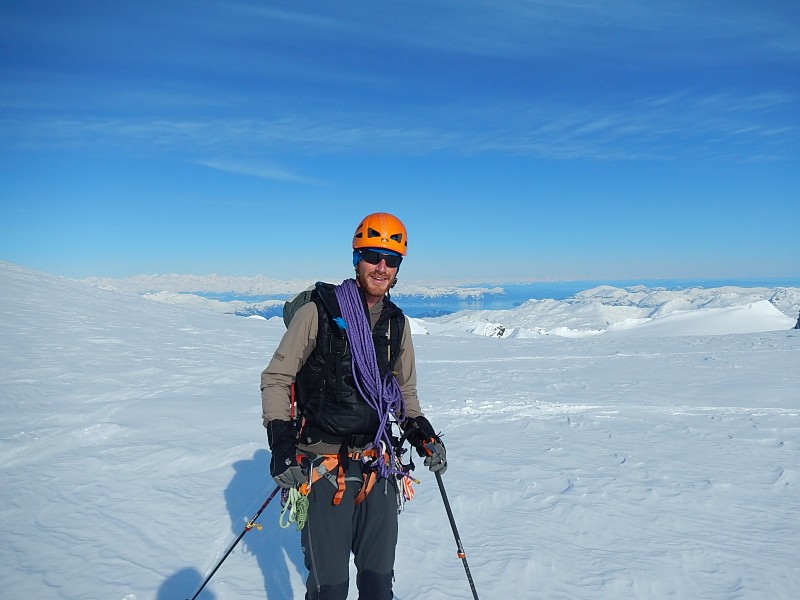 We rolled into the next steep section with the constant concern of more ice as we skied towards the huge cliffs below. 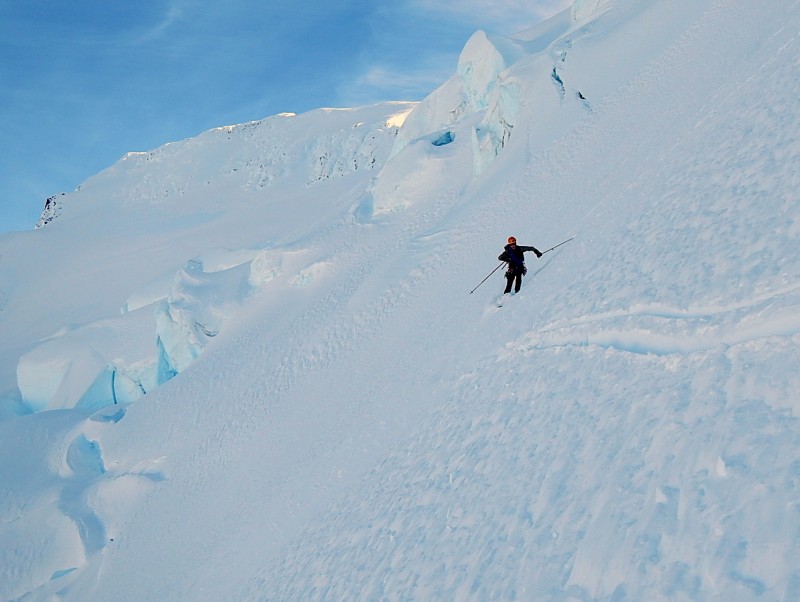 As we approached the exit couloir, it got firm again. Really firm. I watched Malcolm slide sideways on his edges past the entrance. Finally he was able to get his edges into the ice, stop, and begin the painstaking process of sidestepping uphill on the bulletproof ice. Getting into the protected couloir was a huge relief. Fly on the wall: 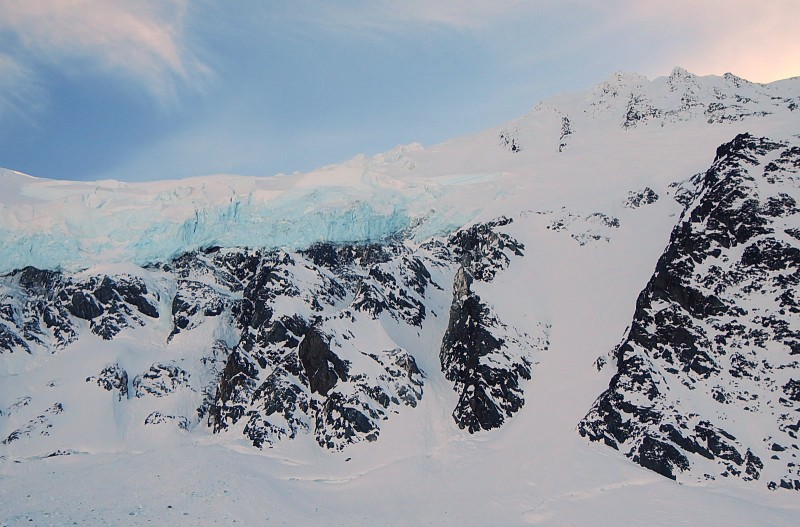 Into the good snow, time to relax a bit: 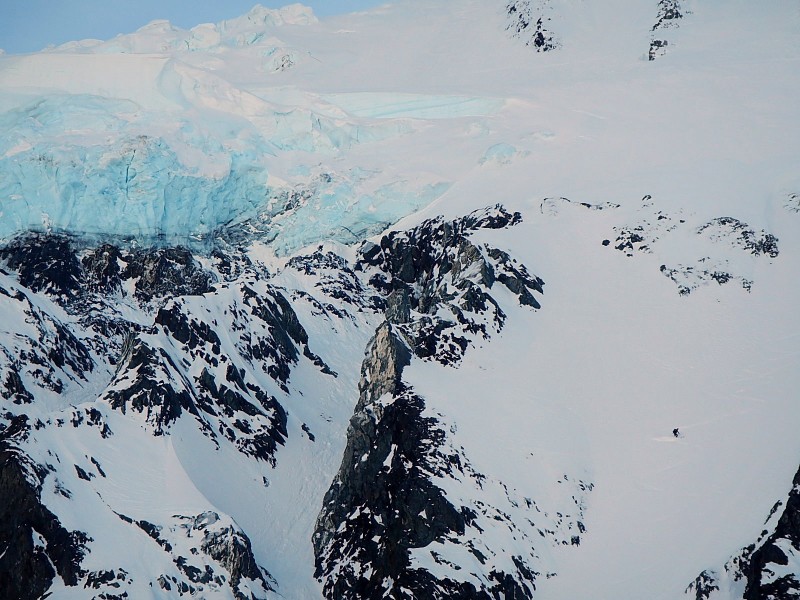 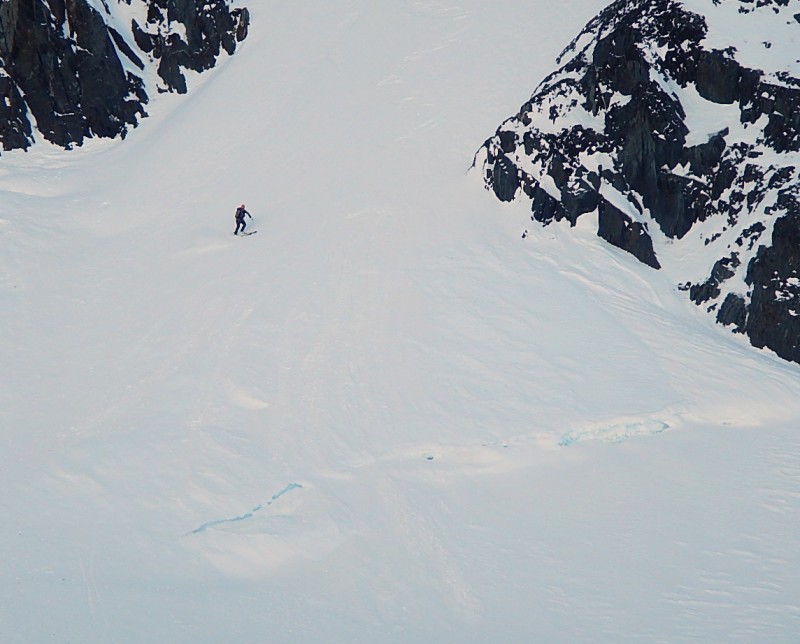 The exit couloir already hidden from view, we enjoyed soft relaxing turns below the summit block. 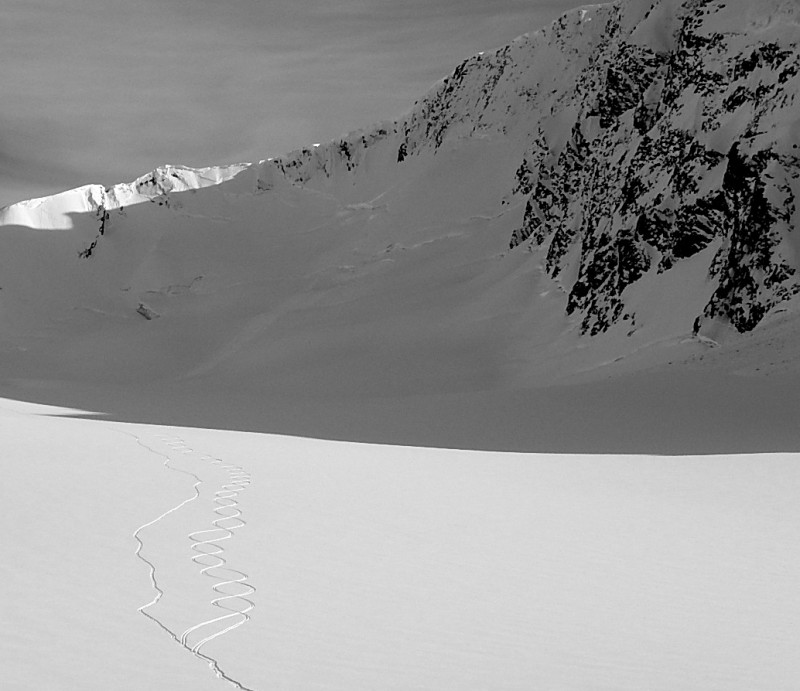 Then retraced our steps back down the Portage. 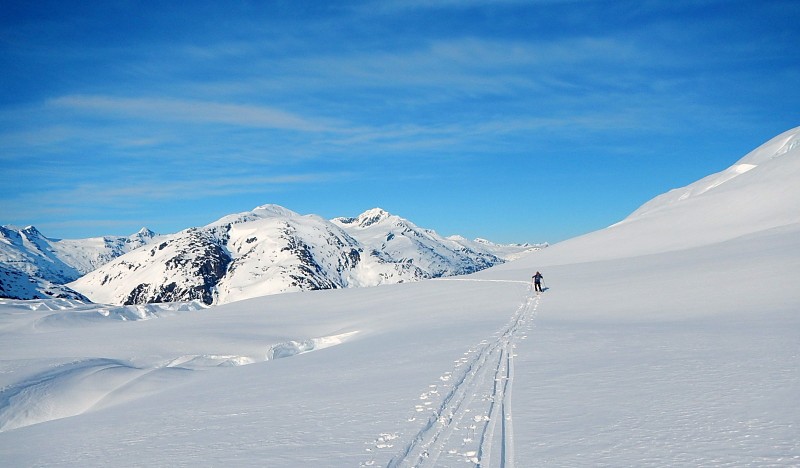 Back at the lake we refueled on wined and smoked gouda, offered to us by a wonderful transplant from Georgia. All we had left was the three mile skate out across the lake. Looking back at Bard, still on the hit list. 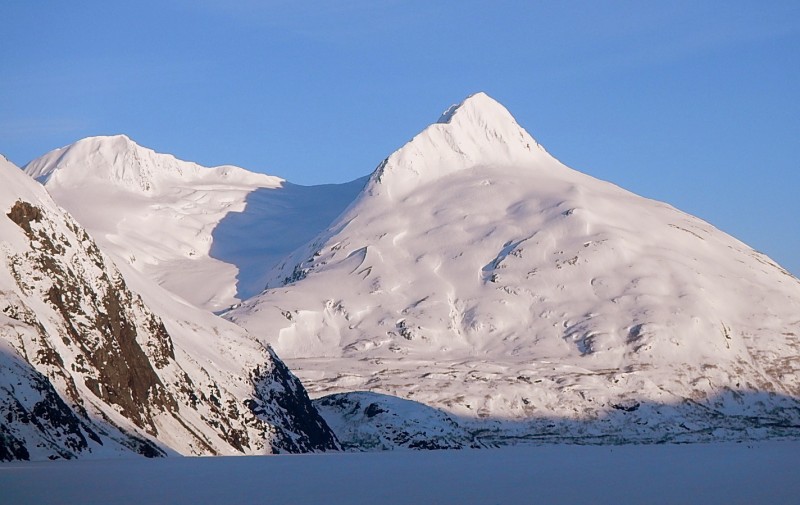 10 hours and 25 miles later we were back at the truck, sharing our adventures with a stoked group who had just ridden Bard.

Combining all the elements of big mountain skiing in Alaska, the day was physically and mentally exhausting. I can’t wait to string together Bard, Carpathian, and Byron next year. And, yes Malcolm, I have scars from the blisters I got on our race back across the lake.

Mike grew up in the mountains of Colorado; after grad school he wanted to go where the nights were longer, the crevasses deeper, and the claws sharper. So, he moved to Alaska. Mike keeps his own outdoor blog at www.mikerecords.com

Mike grew up in the mountains of Colorado; after grad school he wanted to go where the nights were longer, the crevasses deeper, and the claws sharper. So, he moved to Alaska. Mike keeps his own outdoor blog at www.mikerecords.com