For years now, I’ve had a problem with the constant objectification of female athletes. It happens in many sports. But, I think skiing is particularly prone. Female skiers are often literally forced to sell themselves for their sex-appeal rather than for their skills. I’m not sure why this actually is. Maybe it’s the whole concept that skiing has often been considered “glamorous” and therefore “sexy” in the past. But, I’ve had a problem with it for a long time.

Many female athletes have been upset by the recent article “10 Hottest women in Freeskiing” by Freeskier Magazine. But, Freeskier has been a proponent of objectifying female skiers for far too long. It was 2002 and I had been a subscriber of Freeskier since their inception in 1998. Then, I got this issue in the mail. 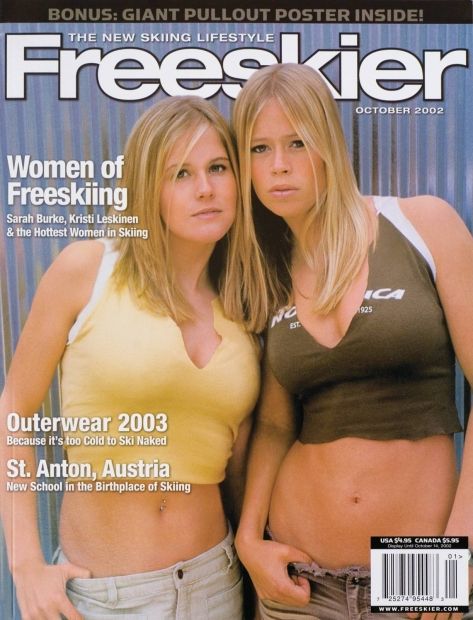 It made me mad. Maybe it was the fact that it was too close to home. I grew up skiing with Kristi Leskinen in freestyle competitions. I remember her as a spunky high school kid. I remember when Jonny Moseley gave Kristi her first pair of twin-tips which would forever change her life and the sport of freeskiing. To see the images of Kristi being displayed as a sex-object abhorred me. Kristi as a Nordica girl (think Lange-girl style pin up) – even worse. I dropped my subscription to Freeskier, and I scorned the Nordica/Lange girls.

Isn’t the fact that these women can shred most men off the mountain sexy enough?

Fast-forward to 2011 and the release of the 2012 Friends of Berthoud Pass Calendar. I wanted to buy every copy and throw it in the trash. But, I bit my tongue, although I should have not. Too many of my friends posed in near-naked photos for this calender. Why? Supposedly for a good cause, right? But, their posing, and everyone buying this calendar only sent a deeper message: Female skiers can and should be objectified. It sells. 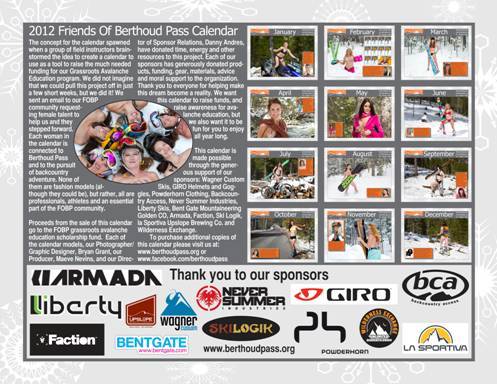 Their message is wrong.

Lynsey Dyer says it best in her open letter to Freeskier:
“I challenge you to be good Freeskier, be so damn good in your clever posts and progressive photography, in your writing and forward thinking that people can’t help but follow you as a leader. I know it’s not the easy way but I know for fact it is what Freeskier Magazine was founded on back in the day. I challenge you to be the progressive, forward thinking magazine your founder set out to create. The magazine all of us was inspired by and dreamed to be showcased in for our talent. ”

This message does not apply only to Freeskier. I believe it applies to the ski industry as a whole.

Imagine you had a sister… or a daughter. If you are the type of skier that usually reads blogs like this, you probably want your sister or daughter to be a little ripper on that mountain. You want that girl to shred like the men. But, what if that sister or daughter of yours wanted to make money as a skier? Would you want her to sell-out for her sex appeal? Or would you want her to be known for her accomplishments as an athlete?

Jen Hudak describes her own experiences with sexual persuasion:
“I’m guilty myself of falling into the trap of using my sexuality to gain exposure. As a 17 year old girl (at the time of the photo shoot, not of the publication) I was asked to be a part of Freeskier’s “Women of Freeskiing” issue. The magazine came out in the fall of 2004, I believe it was the 3rd annual issue, and I had just turned 18. The previous winter I landed on the podium of the US Freeskiing Open in Vail, CO and followed it up with a 4th place finish in Whistler at the World Ski Invitational (WSI). Back then, I was known for having “man-sized air” as one article noted, and I burst onto the scene with so much motivation and enthusiasm for what would lie ahead. Little did I know that my first chance to be in a ski publication would have more to do with my good looks than my skiing talent. I posed in a bubble bath. A bubble bath. And I don’t even like baths! At the time, I thought it was great. I actually really enjoyed the photo shoot–I love sports but I’ve always loved being a girl too, I love to get dressed up and I’m really not shy in front of the camera–but my 17 year-old self didn’t realize what I was allowing to perpetuate. Thank heaven the internet wasn’t as prevalent back then, or when you google “Jen Hudak” today, an image of me sitting in a bubble bath would be the first image to come up.

That is the real problem. These sexy images of female athletes live on forever and can actually do the athlete disservice. The more attention that is paid to a woman’s looks, the less attention gets paid to the woman herself, her accomplishments and her athletic achievements. She just becomes another piece of eye-candy. ”

So, male skiers of the world. Please start admiring female athletes for their accomplishments, not their boob-size. If you want to look at women without their clothes on, there’s a whole separate realm of magazines and internet world with which to accomplish that task. To the female skiers of the world, stop agreeing to be objectified. Such actions set a poor example for up-and-coming young female athletes. Their lives are already bombarded with sex. They don’t need to see it in their role-models. To the ski industry, let’s start respecting women more for what they actually have done. Many women have achieved incredible feats. Why not honor them?

It’s time for these lady skiers to show us how they ski. Chances are, they shred harder than you.

6 thoughts on “Of Women and Skiing”