After our last visit to North Pole Basin, the big couloir dropping from near the summit of Galena Peak was at the top of our wish list. With Gothic Road still open and another storm approaching, we knew our chance to ski this line was now or never. Besides, it was my birthday, and I like skiing good lines on my birthday. Pete Sowar and John Jasper joined Brittany and I, and they came up with the supremely appropriate “Santa’s Chimney” name for this line:

What would Santa leave in our stockings this year? I must have been naughty this year, because Santa gave me a lump of coal…

We parked in Schofield Pass and made a diagonal towards Rock Creek through a beautiful forest:

Discussing whether or not to take this knob to the right or left:

Brittany and I ascended this point, while Pete and John traversed under it to the right. Both ways worked just fine. Brittany ascends with Baldy behind her:

The Northeast face of Galena had several intriguing but short runs coming off the summit. Pete and John can be seen on the ridgeline to the right of the summit:

Frank nearing the summit of Galena:

The views of Snowmass and Capitol never get old from this part of the Elks:

The wide angle view of the Elks, with all the 14ers except Castle visible:

Crystal Peak was directly across the basin, and looks like it would have great skiing once it was a little more filled in:

Enough with the skinning and scenics, on with the skiing! The couloir looked wind affected from the previous few days’ worth of wind, but not bad once we got into it. John Jasper drops in first:

Brittany dropped in next: 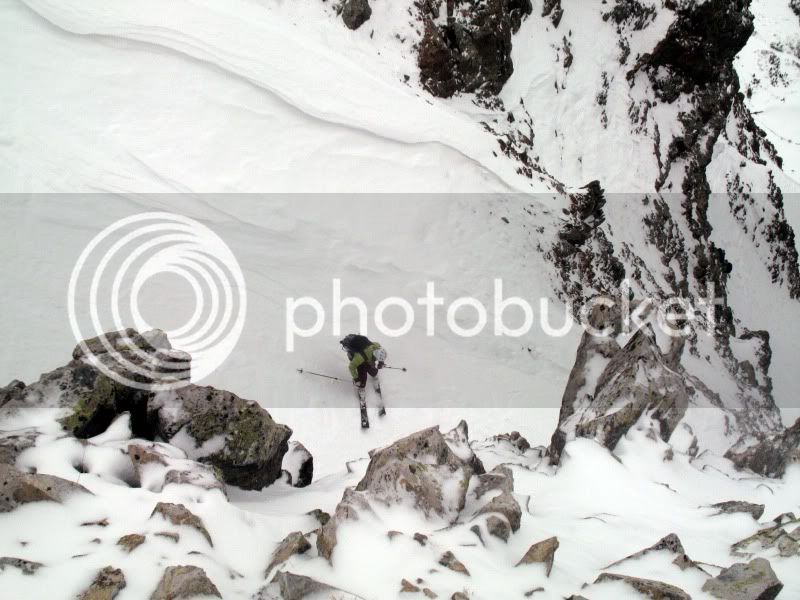 My GoPro camera mounted on my chest mount caught this shot of me as I dropped in myself:

Nothing but smiles after the first pitch:

Santa served me up my lump of coal right after that photo was taken. As I went around the corner, I hit a hollow spot that sent my ski tips under some harder wind affected snow and sent me headfirst down the slope. The true steepness of this line soon became apparent, as it took me three rolls before I finally came to a stop. Since the conditions are still somewhat thin, I was using my old skis and equally old Fritchis, and while they have been basically trouble free over the past 10 or so years, I guess they were ready to be retired. The heel moved on its’ track to a size way bigger than my boot, and the adjustment screw refused to move it back. Great. Only one thing to do. Just 1200′ more of one-ski skiing left to go:

At least everyone else was still having fun, and the snow continued to get better as we descended. John:

Yes, my right leg is still sore. And no, I’m not really making turns look that good with one ski:

Luckily, Jasper was able to fit into my broken ski well enough to shuffle out the flat valley, while I adjusted one of his skis to my smaller boot. It would have been an epic slog out otherwise. Despite the broken gear, this was still a great descent in an amazing zone. All things considered, I’m more interested in skiing aesthetic lines than seeking perfect conditions, and this line qualifies with ease. This stuff will never get old to me:

Click the image below to give it a listen and subscribe on Apple Podcasts or Android! Kent Viles talks about his lifetime of playing music, from playing fraternities at 13 to developing the Dobrato Guitar- a Grammy award winning instrument.