Many big peaks got skied this weekend:
* Pyramid- by a group of young Aspen skiers
* N. Maroon– by Dave Bourassa, Mark Cavaliero, and Andy Dimmen
* Capitol– by Ted Mahon and Al Beyer

Ted’s success on Capitol makes him the third person to have completed all of Colorado’s fourteeners. Congrats to Ted!

This weekend, we also joined in the fourteener slaying by skiing Holy Cross via the Cross Couloir. I was joined by Frank Konsella, Jeremy Wegener, Pete Sowar, and Kellie Baker.

Why do they call the mountain Holy Cross? This picture should answer that question.

For those of you not privy to the history of Colorado’s mountaineering, many of the first recorded ascents of Colorado’s fourteeners were done by surveyers. There were a few different surveying projects that went on. One notable surveying project was the Hayden survey. It was F.V. Hayden himself and photographer W.H. Jackson who made the first recorded ascent of Holy Cross in 1873. In the process, they took the photograph above, and the mountain then became famous.

The standard approach route is not difficult, but it can be long. We began with snowmobiles up the road to the Halfmoon Campground. We then skinned about 1000′ up to Halfmoon Pass, where we skied down about another 1000′. We then had to climb a good 4000′ or so to the summit. We skied the Cross Couloir, but not all the way as the snow does not continue to the bottom of the cross. Instead, the standard route is to exit skiers right on a field of snow, down to the Bowl of Tears lake. We then skied down the drainage until we were near our previous tracks, to skin back up to Halfmoon Pass. From there we skied back to the snowmobiles. All in all, it under 10 hours from when we left the snowmobiles to when we returned.

Frank has written the report for our trip to Holy cross. You can view it here

The Cross Couloir is out of view on the left. 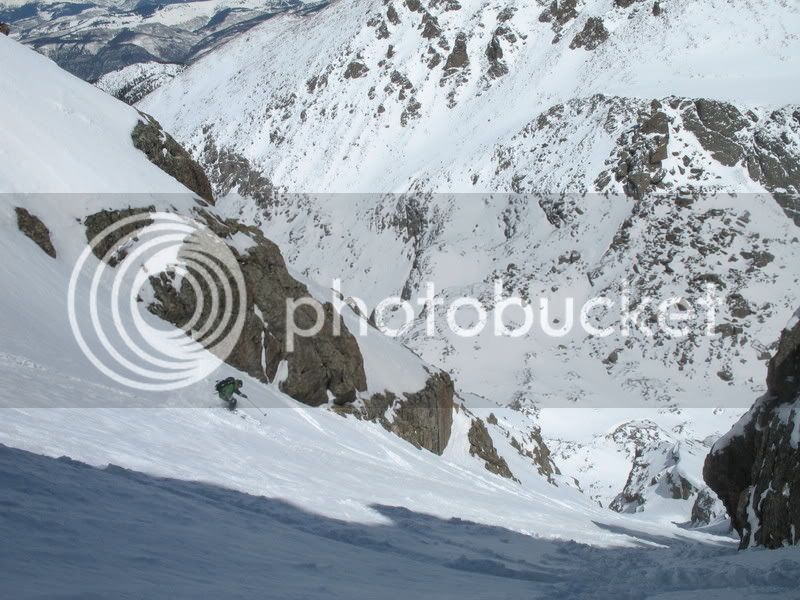