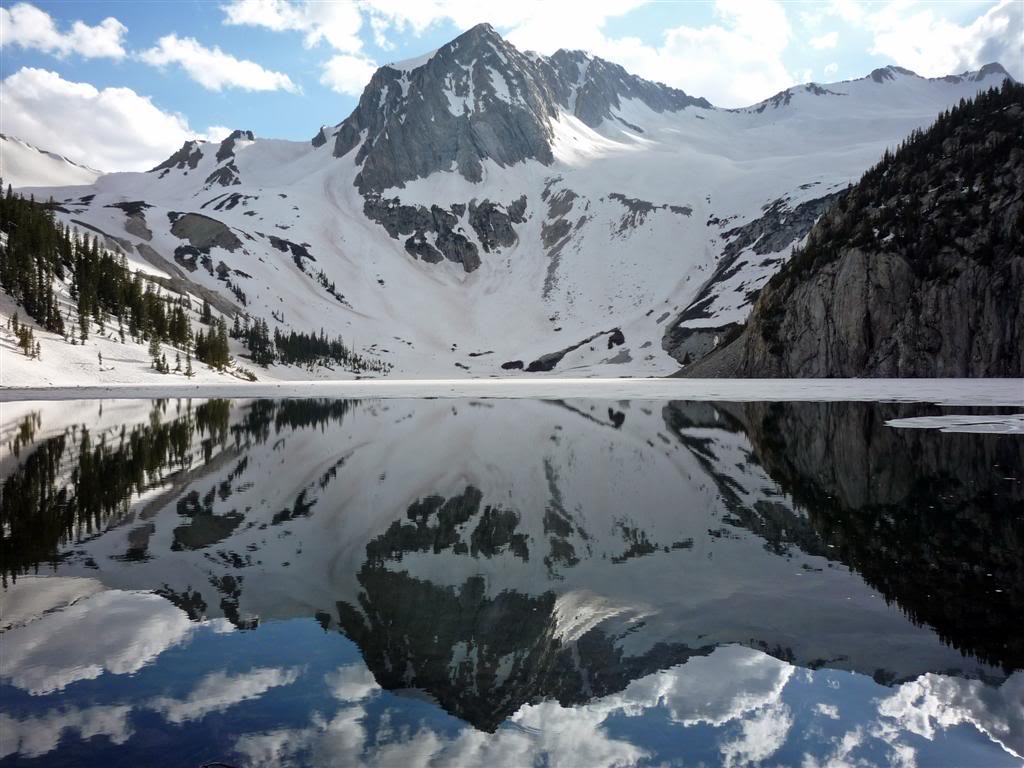 Snowmass Mountain was a great end to my fourteener season for 2008. I was lucky to be joined by my friends Jim Clarke and Marko Ross-Bryant. Below is a slightly modified version of my report for skiing Snowmass Mountain, which would become my 45th fourteener skied.

Snowmass Mountain is always one of those obvious peaks seen from far away. True to its name, Snowmass Mountain seems to always have a huge mass of snow on it’s east side. For a couple of years I’ve wanted to ski this east bowl, but I always knew it was a slog- approximately 22 miles round trip.

Then the east side became the plan. Partners fell easily into place. And the slog up Snowmass Creek began around 9:30 am on Thursday morning.

Part way up the valley, you catch a beautiful glimpse of Snowmass Mountain from the Bear Creek drainage.

However, the peak is still miles away.

A closer view of Snowmass Mountain, which is the “lump” on the left of the pointed peak.

Jim tried the log jam, but the logs were easily rolled. It looked like he was in the “log-roll” game at the water park where I grew up in Ohio. I suspect as the water levels go down a bit the logs settle, making it easier to cross. But, we actually found it easier just wading across the river below the log jam. The river was pretty fast and deep- thigh deep for me. We were able to use submerged logs on the bottom of the creek to help make the crossing easier. Marko crossing.

From there, we continued on the trail as it quickly gained elevation. Just a few hundred feet above Oxbow Lake we found ourselves in a dark forest with a trail covered in snow. I quickly switched to skins. Seven miles of carrying my already heavy pack with skis and boots on it as well was plenty enough. It was about another mile to Snowmass Lake. But, it was definitely a sight for sore eyes after carrying our packs for 8 miles and 2,600′ vert!

We quickly set up camp near Snowmass Lake.

And we spent the evening enjoying the amazing views.

Hagerman Peak stands impressively over Snowmass Lake, with Snowmass Mountain on the right.

We woke early in the morning and got a fairly early start at 4:15 am. The hike started with an immediate creek crossing in knee-deep water which was freezing cold- ending up on the other side with a steep (at least it feels steep trying to walk with wet barefeet) frozen/snowy embankment. Somewhere in the process of pulling myself up the frozen embankment from the icy-cold water I felt my pole slip out from my hand and into the creek. “My pole! My pole!”. But it was still dark. We couldn’t see
anything in the creek. And before I knew it, my pole was gone. Lesson learned: Use pole straps! Many thanks to Marko and Jim, though, for always making sure I had another pole to use when I needed it!

Nevertheless, onward we went, and we were happy to find ourselves walking on frozen snow. Cold temperatures in the night had allowed the snow to freeze quite solidly.

Skinning up the bowl toward Snowmass.

Marko, with the Maroon Bells in the background.

Eventually, we made our way to the ridge on the south side of Snowmass where we found some fun climbing.

And finally the summit! Marko posing on the summit block.

Looking down at Geneva Lake.

Getting ready for the skiing, Capitol behind.

Wanting to ski from the summit, I picked this line to the lookers right of the peak.

I told the others it was probably not wise to follow me. As I made my way down, the snow was manky on the upper face and I ended up exposing twice as much rock as had been there before. A look back at my line on the upper face.

Me skiing the bottom of the line.

Jim and Marko took a line to the lookers left, a bit further down the ridge. Jim skiing.

And then, we had the opportunity to ski corn all the way down to Snowmass Lake.

The creek crossing back to camp.

We hung out at camp for a couple of hours, eating, laughing, and then finally packing to head on out back to the trailhead. None of us was looking forward to the slog out. We were able to ski for nearly a mile. But, after that, the skis and boot went back on the pack. I must say, two days in a row of carrying a heavy packs like this (the skis and boots are the killer) is truly grueling. We were all finding our own states of misery and pain. But, we all persisted.

Jim and Marko taking a break after the snow bridge crossing.

On our way down, we met a few groups heading up to Snowmass Lake, including a pair of skiers.

Finally, around 7 pm, we arrived back at the trailhead. Marko captured this photo of me so happy to take my pack off, and Jim giving beta to another skier.

I am glad to have completed Snowmass Mountain this season, though the distance carrying a heavy pack made it a difficult feat. This wraps up my fourteener attempts for this season, as any new ones I need do not have enough snow to ski any longer.

I wanted to thank Jim and Marko for joining me. I couldn’t have done it without you two. Thanks also to Marko for contributing lots of pictures.

And I want to thank all of you as a whole. When Frank completed his fourteeners, I was worried about being able to find partners to join me on skiing my remaining 15 fourteeners. However, people and partners have come out of the woodwork, and I truly appreciate all the support and beta dozens people have been giving me. I now have only 9 fourteeners left, and it wouldn’t be so without the help of so many of you!

And that wraps up my 2008 season. Unfortunately, in 2009, a tear of my left ACL and subsequent surgery for repair prevented me from skiing any fourteeners that season. I would not be able to pick up my project again until 2010 – leaving 21 months of no fourteener-skiing in-between. And I would pick it up again with a BIG one. Stay tuned!