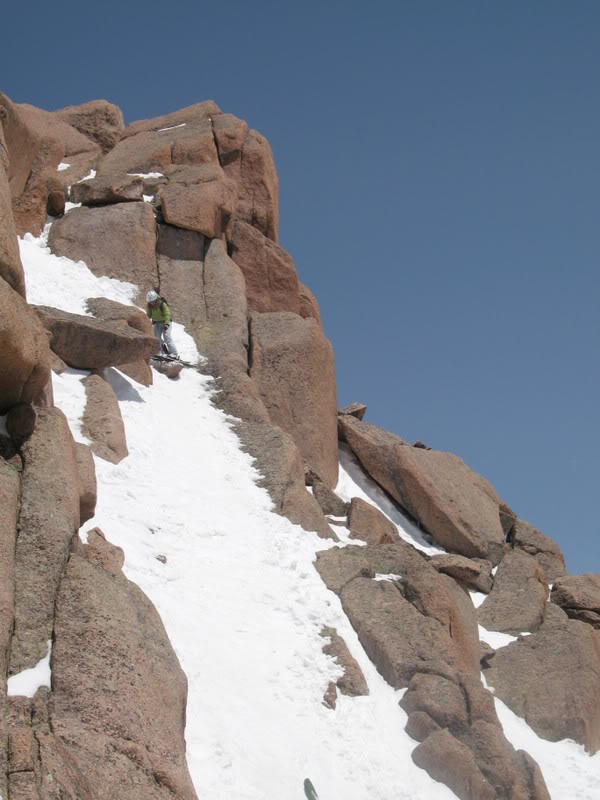 The Chicago Basin fourteeners are among some Colorado’s highest peaks that are difficult to access. We made the train trip, and hiked in to Chicago Basin, setting up a camp that would be our home for a few days. After skiing Eolus the day before, our goal was to ski both Sunlight Peak and Windom Peak in one day.

So, on a crisp cool spring morning, Frank and I headed out to achieve our goal, along with our friends Jordan White and Jarrett Luttrell. Below is a slightly modified version of my original trip report for Sunlight Peak, which would become my 37th fourteener skied.

After skiing Mt. Eolus, the next day we decided to go for the two remaining fourteeners in the basin: Sunlight and Windom. Knowing that the weather was going to be less cloudy and warmer this day, we made sure to get a much earlier start.

Skinning to the higher basin in the morning.

Looking back toward Jupiter.

Our goals for the day (as seen from S. Eolus the previous day).

The climb up Sunlight was pretty easy at first.

Then it got a little steeper and harder.

And then it turned into a wall of rock.

Jordan hanging out on the summit block.

With all this rock, skiing from the summit required some creativity. There was some snow on the east face, although the primary face we wanted to ski was south. On our climb up, we saw this “tunnel” which would become our “portal” between the east and south faces.

Skiing from the summit.

And then the tunnel!

From the tunnel we were able to enjoy fantastic snow all the way down the south face.

Our ski route on Sunlight Peak.

After our descent of Sunlight Peak, we paused for a break in the warm spring sun, before beginning our ascent of Windom. Check back for our report of the Widowmaker Couloir next week!

Article Name
Sunlight Peak Ski
Description
Sunlight Peak is among Colorado's most remote fourteeners, and is difficult to ski from the summit. Join Brittany as she recounts her ski descent of Sunlight Peak!
Author
Brittany Walker Konsella
14erskiers