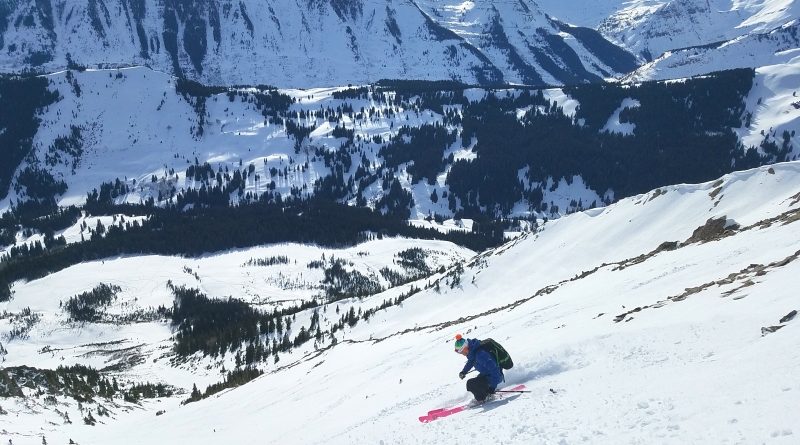 I’ve said it before and I’ll say it again. This year’s snowpack in the Elks, especially around Crested Butte, has been scary. So scary, that we’ve largely avoided our backyard backcountry. Perhaps the most scary was the cycle at the end of February and very early March where we saw enormous natural slides. Natural large slides were observed Axtell, Beckwith, Gothic, Redwell, and much much more. Perhaps the most notable was the one on Afley, where the entire southeast face slid, and propagated over to the east side too. Either way, it was getting hard to count the number of slides out there. It was a good time to ski the resort, as they were finally opening more extreme terrain anyway.

But then after the first week of March, the snowpack experienced a little bit of melt-freeze cycles. And before we knew it, our two weeks of CONSIDERABLE avalanche rating was bumped down to MODERATE. It was time to step out and see what the snowpack had in store for us.

Our friends Andy and Larry were visiting from Steamboat and we talked over a few options for some skiing. Everyone agreed that Gothic Mountain would likely be a fun yet relatively safe ski for our current transitional snow conditions. Our goal was to aim for the south-facing Spoon or the west side gullys – both aspects having no mention of “avalanche problems” in recent forecasts. We also were hoping for a little more solar snow with the transitioning snowpack.

The bootpack up Gothic is always one of our favorites! Me. 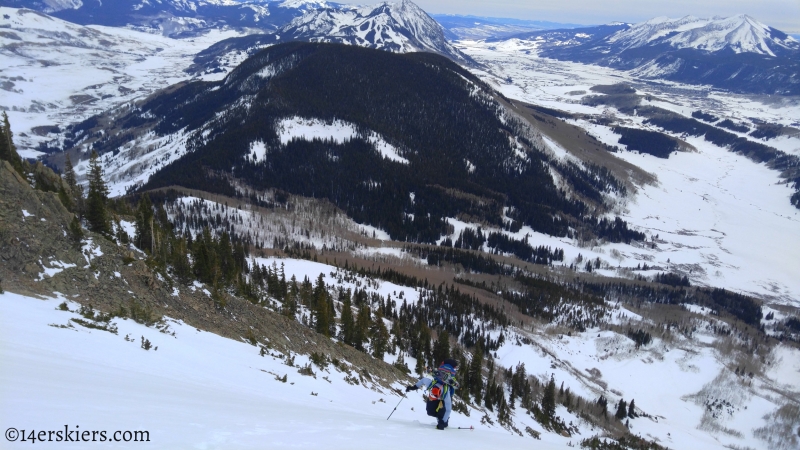 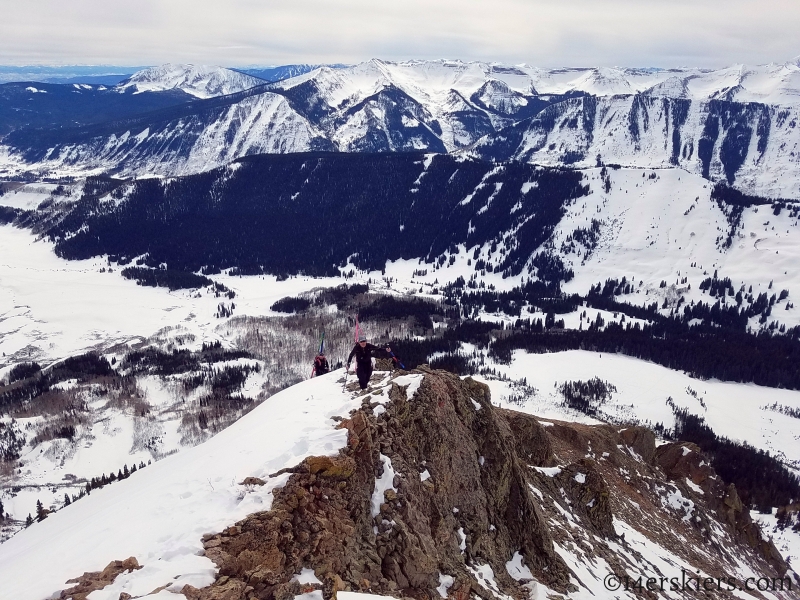 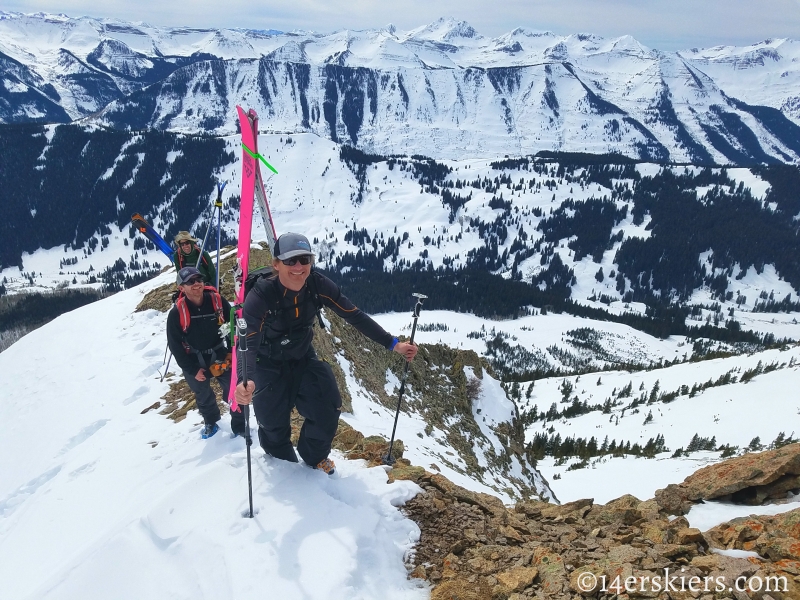 As we rounded the ridge we got a better look at Gothic’s west side. We decided it looked to be in better shape for skiing than the Spoon. But, one of the gullies had a heavily wind-loaded ridge that dipped southeast. I pointed it out and stated that we should not ski that particular line, given the state of our snowpack for the season. Everyone agreed.

The boys went ahead on the final stretch of the ridge and by the time I reached the summit, somehow they had changed their mind. The exact gully that we had all agreed was dangerous to ski was suddenly now okay to ski…. at least in their minds.

That’s when things started to kind of fall apart – a poor example on our part of backcountry decision-making. Instead of sticking my ground right away, I began to succumb to the peer pressure. Alright, I’ll take another look at the line. But, when I did, I said straight up, “It gives me the heebie jeebies.” I kept saying that over and over again. But, somehow the boys had largely decided this is what they were going to ski.

Communication broke down. Larry was putting on his skis in one place, Frank in another, while Andy sat on the ridge. We weren’t together discussing the situation. Instead, we were trying to shout from our place on the mountain. It wasn’t good, and I had the vision in my head of those avalanche reports that get released where they describe one or two skiers decided to ski something that the group didn’t agree on, but it happened because communication was poor – and it ultimately resulted in tragedy.

I kept saying the line made me uncomfortable, that we’d find more mature snow further down the ridge. You could see that the snow in that particular gully had been less affected by solar radiation, and could therefore be less stable. What I didn’t explain was that the wind-loaded gully was the classic thing we should be avoiding right now given the history of remote triggers in similar terrain throughout the season. We were already venturing out on more risky terrain, why not ski the safest line possible given we had choices? But, somehow that never made it out of my mouth. Why? Because I was upset that my friends wanted to ski something we had previously all agreed on was unsafe. Instead, I just found myself feeling bad for being the one who was trying to change everyone’s mind.

Peer pressure is tough. Especially when it comes from two of my best ski partners. I almost gave in. Larry made a few turns at the start of the line. I even started putting on my skis. But, my gut… my gut… my gut wouldn’t let go. It was screaming at me. It was saying, don’t do this! And the few times I haven’t listened to my gut have not resulted in positive results.

And then Andy simply said, “Well, Brittany, if you really don’t like this line, let’s just go ski the other one.” And then we did.

We walked the ridge south to a safer west-facing line that wasn’t wind-loaded. There the snow was more consistent and in better condition. And we had some good turns down the west face. Frank dropping in. 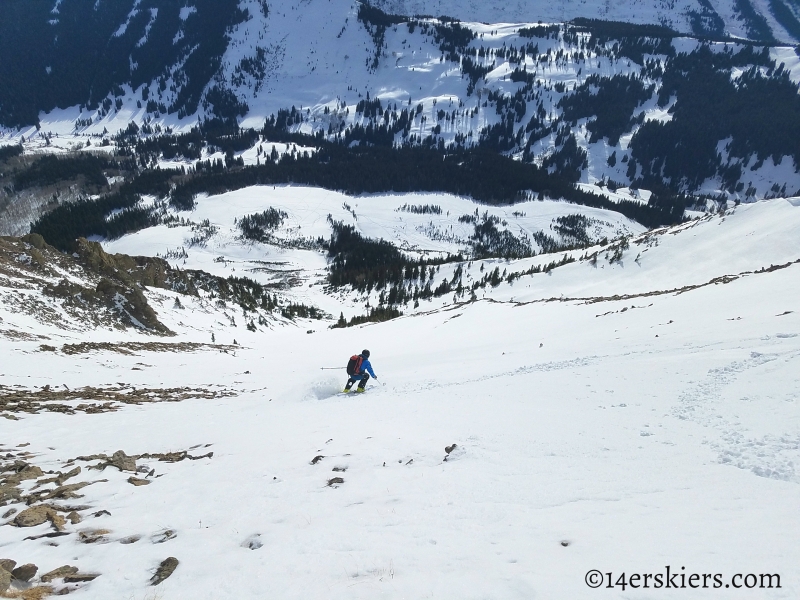 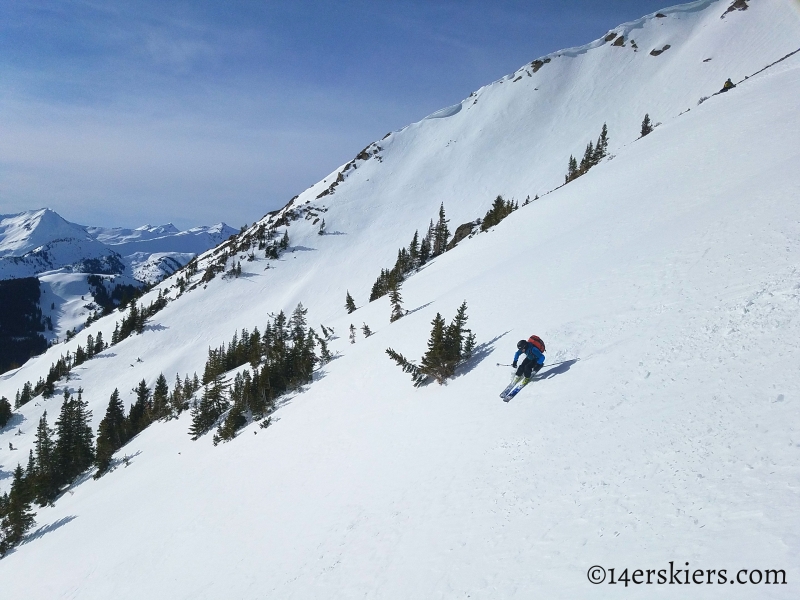 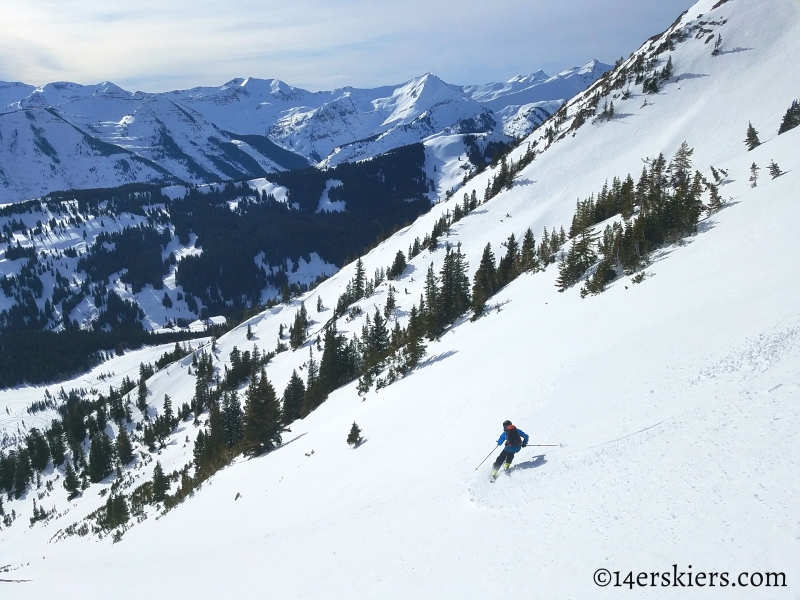 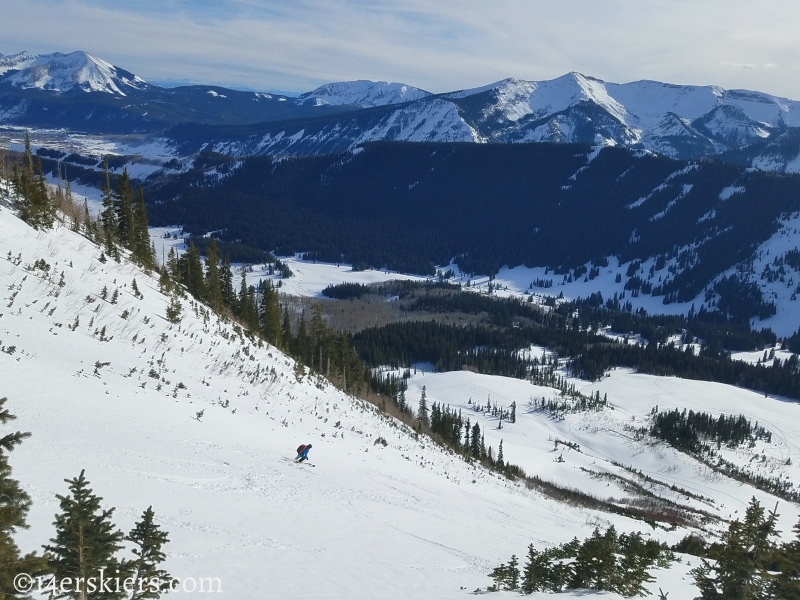 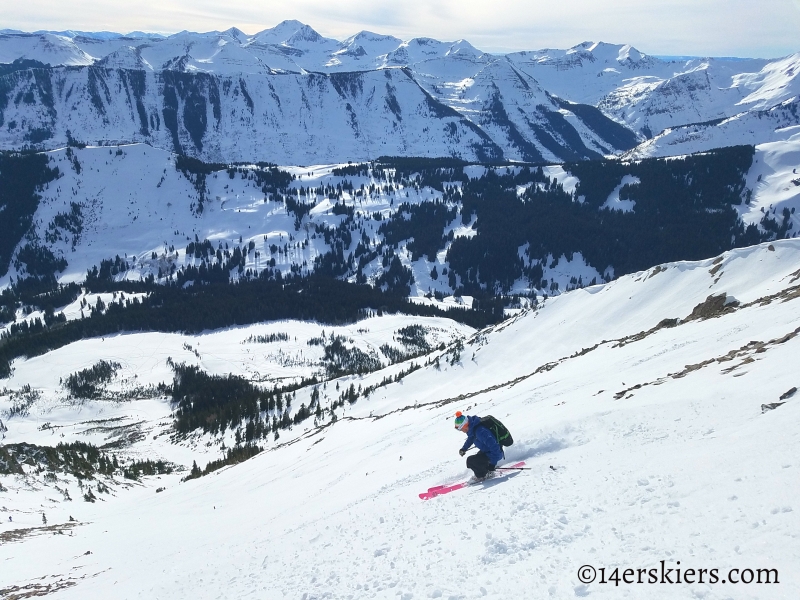 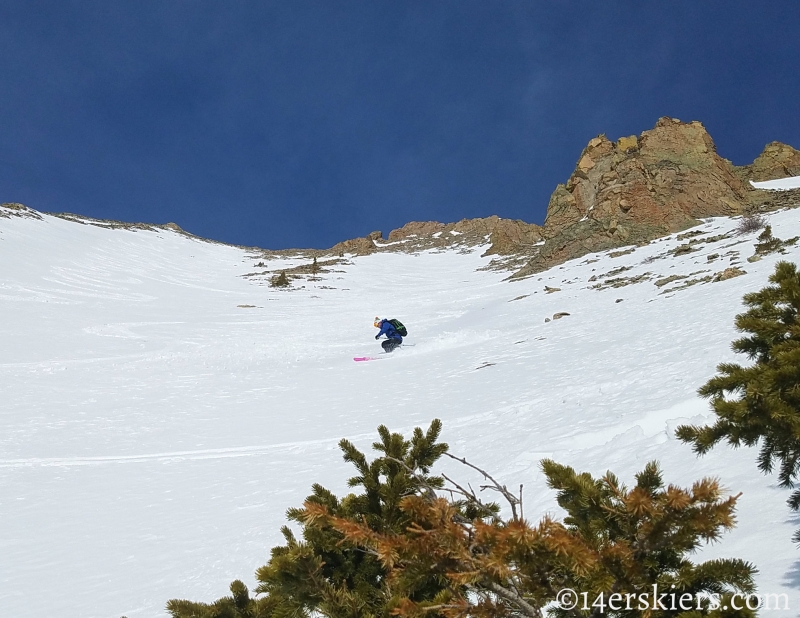 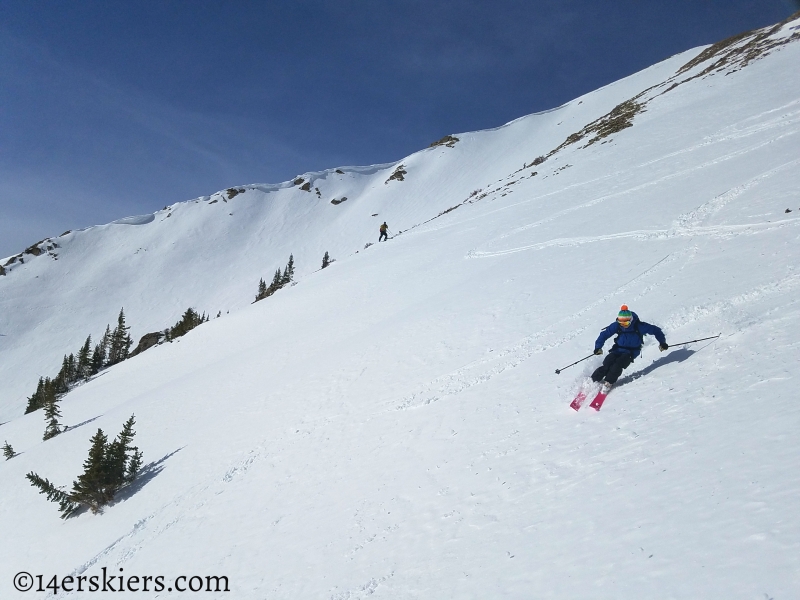 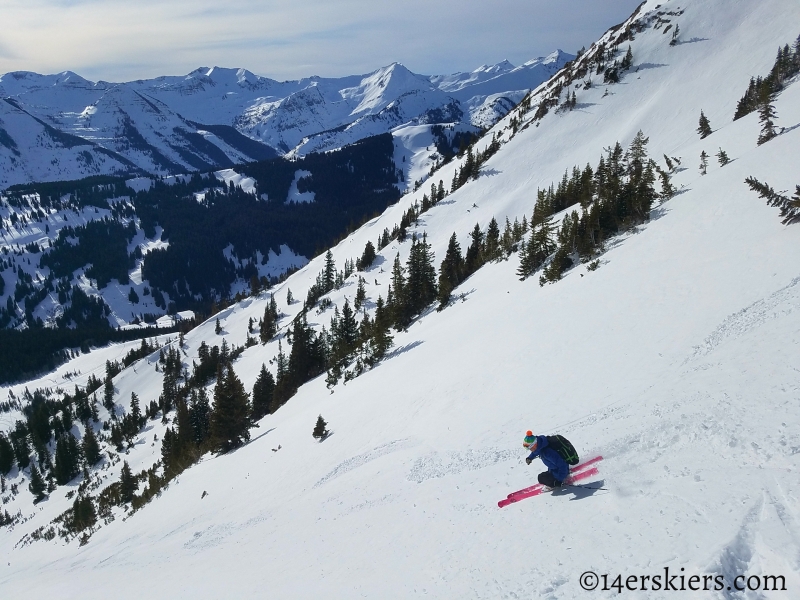 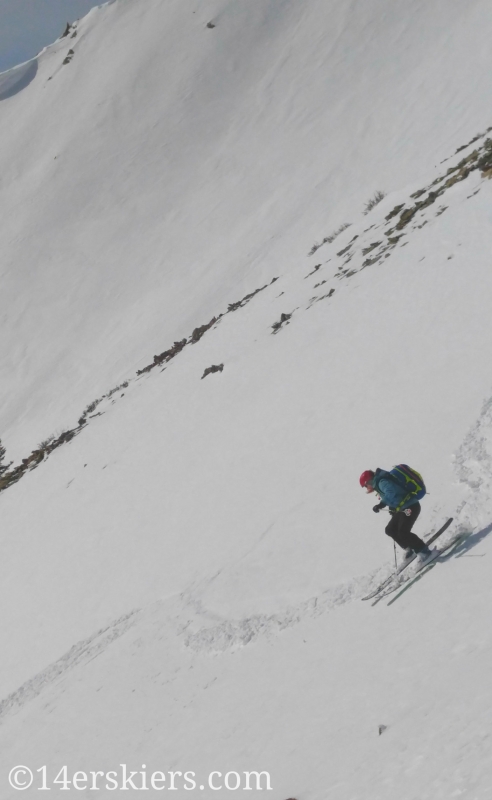 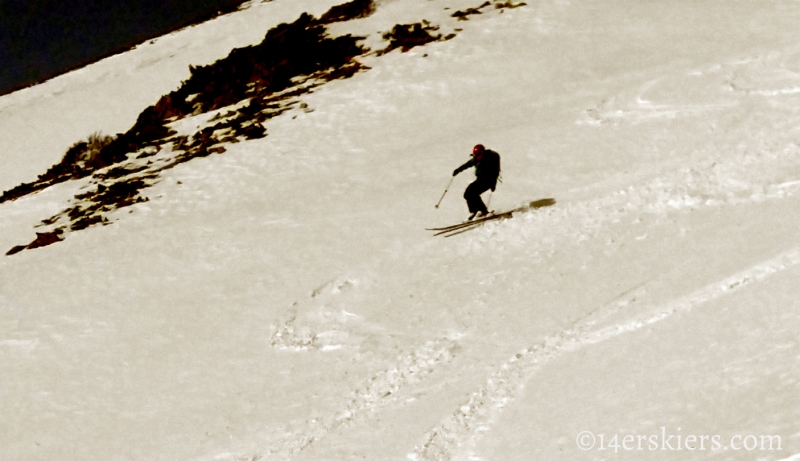 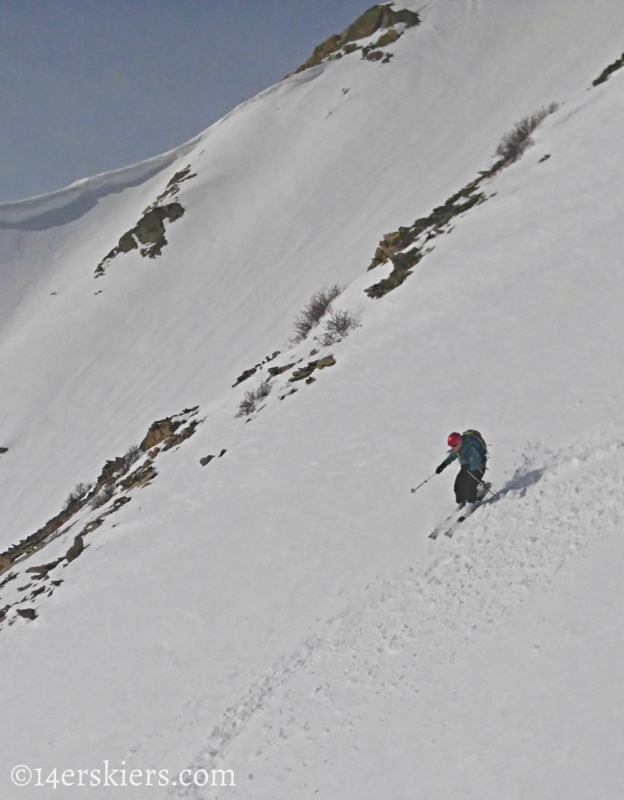 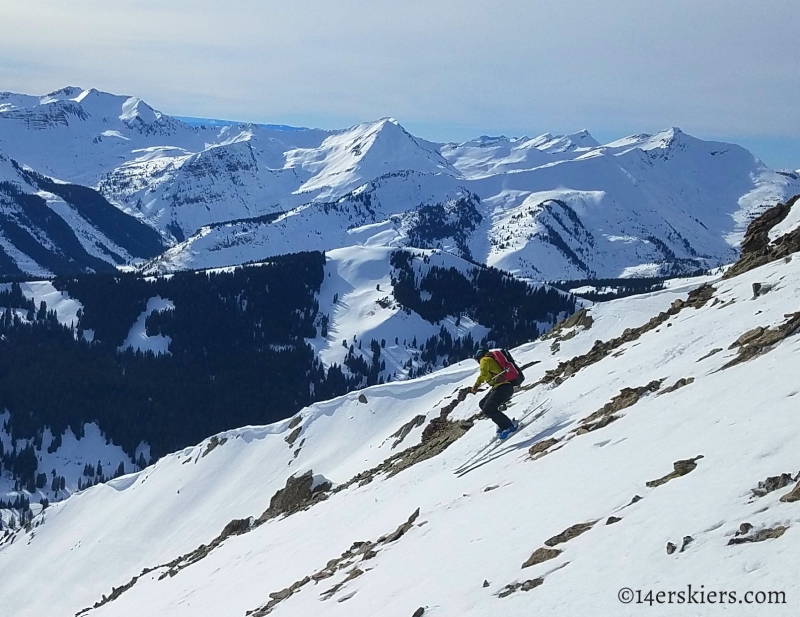 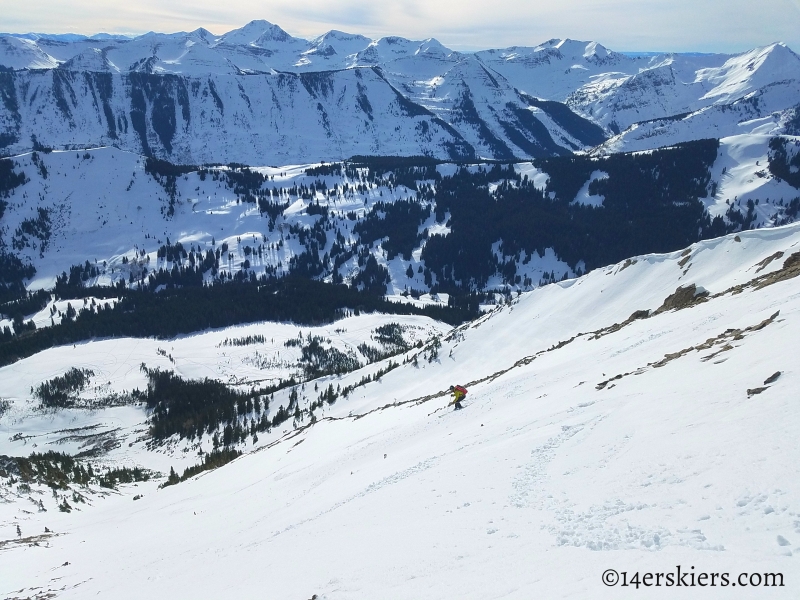 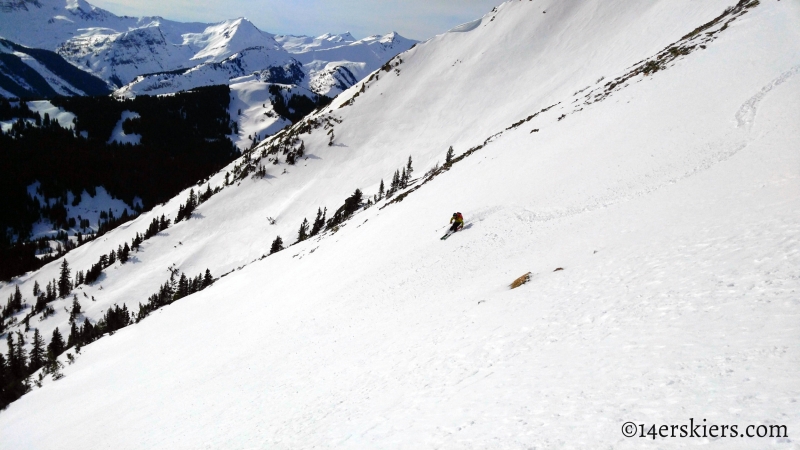 Notice the wind-loaded ridge behind Larry, the feature I wanted to avoid in the previous gully. 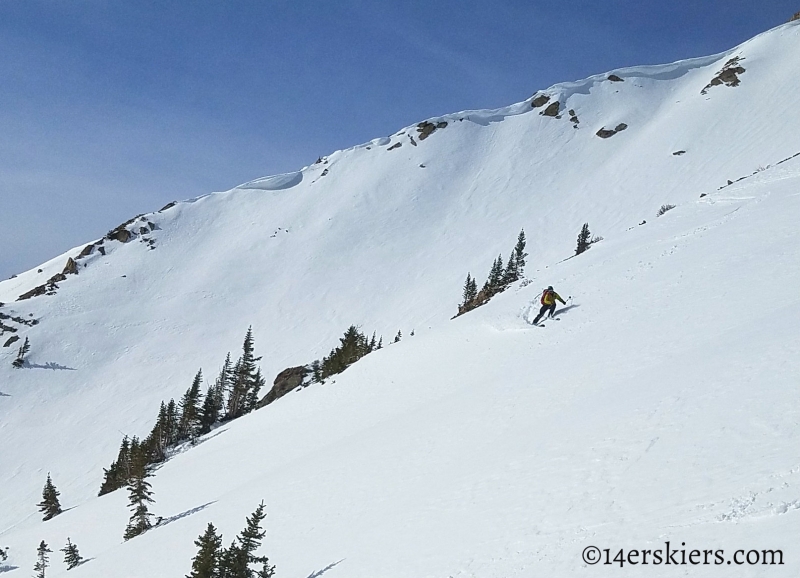 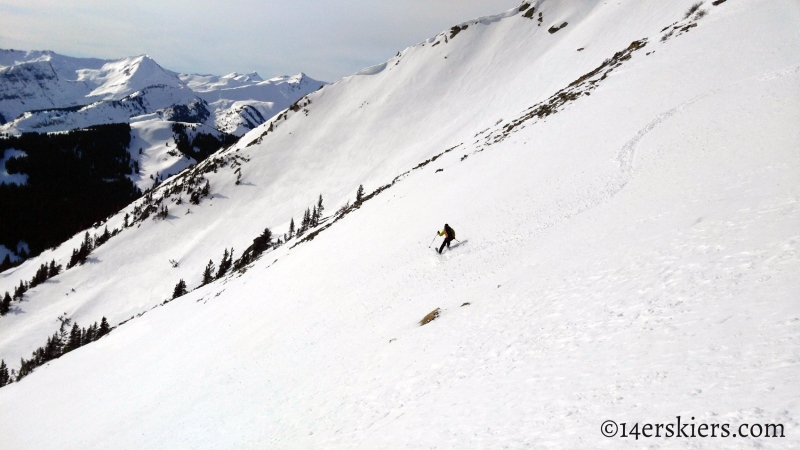 The bottom of the line had some nice skiing in the trees. Andy. 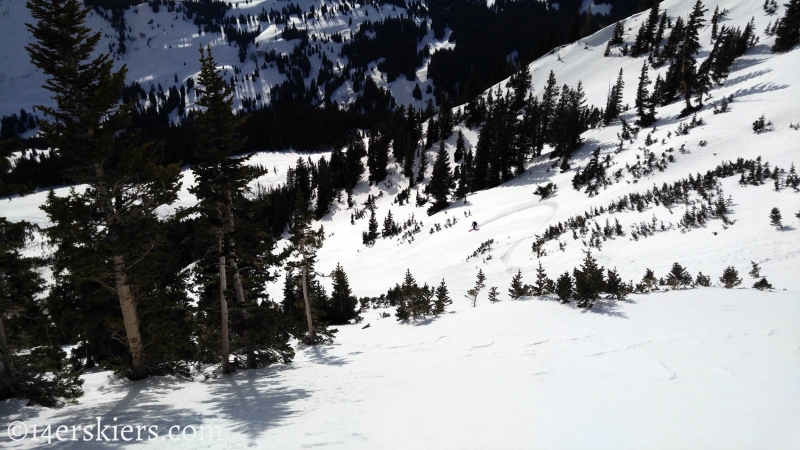 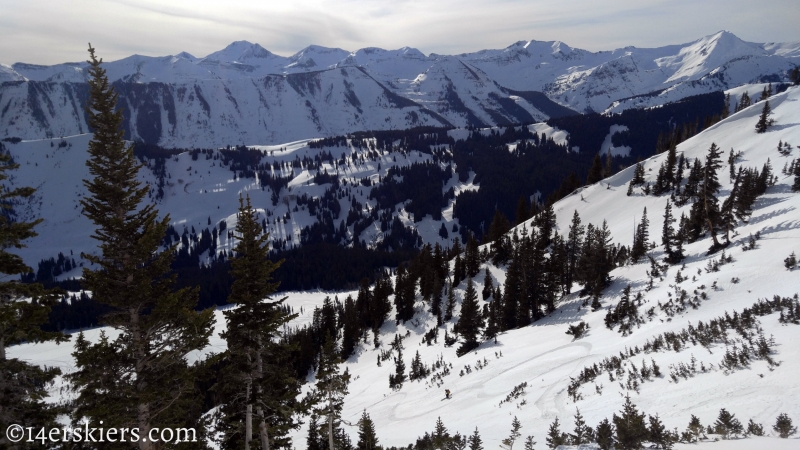 When we regrouped at the bottom, Frank said to me, “In looking back up at the west face, we all agreed… It’s better that we skied what we skied. So, thanks for standing your ground.”

I didn’t say anything. Not outwardly anyway. But, inside, I was loosing it. Honestly, I didn’t exactly have the best ski down because I was distracted…. Distracted because I felt betrayed by some of my best ski partners…. That I had clearly said I didn’t want to ski a particular line, but somehow their minds were changed. I was upset that I had to be the one to stand my ground and I felt that never should have happened in the first place. 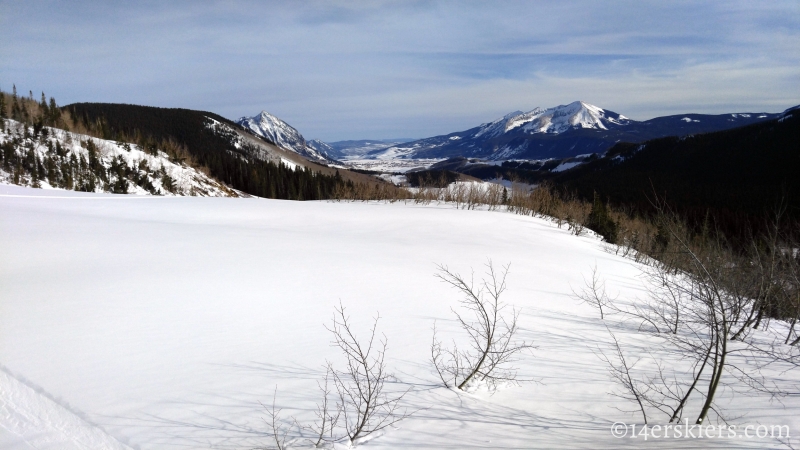 To be honest, even though we all ended up safe and skiing the right thing, I’m still processing this event. Is it possible that we could have skied the wind-loaded gully and been fine? Yes. It is. But, I’ve learned that when your gut screams at you to not do something, you’d better listen, despite what logic your mind might be turning over to justify your choice. And given the fickle snowpack we’ve had this year, taking a little extra caution is the right thing to do.

What would I do differently next time? Better communication. I would be that annoying one who makes everyone regroup and talk and make the decision together. I feel if I had done that, then my concerns would have been better heard from the start. I hope this story makes you think a little more about how to communicate with your partners about your backcountry decision-making.

Am I glad we ended up skiing the line that we did? You bet I am.