After skiing Little Bear, I had my sights on Ellingwood Point and Blanca Peak, also located in the same zone. But, I had to wait for conditions to improve. A good spring storm coated the peaks sooner than expected, and I was on it….

Below is a slightly modified version of my report for skiing Ellingwood Point and Blanca Peak, which would become my 47th fourteener skied.

After hitting Little Bear a week and a half ago I knew Blanca wasn’t really skiable, as can be seen in this picture. Ellingwood is on the left and Blanca is the pile of rocks on the right. 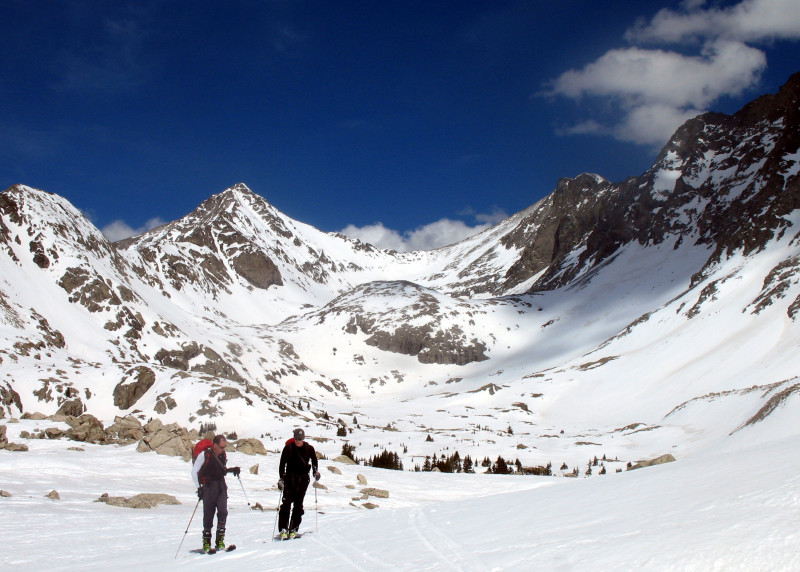 I knew that in order to ski this peak, I’d have to be patient and wait for a nice wet spring storm to come in and cake Blanca with snow, making it a peak more appropriate to it’s name. Well, that storm came sooner than expected. Much better coverage this time!

Sunday’s plan had originally been to ski Wilson and/or El Diente. With Frank being sick all week, I rallied our friends Chris and Pam to join me. But, upon waking up on Saturday morning and seeing how much snow had fallen in the San Juans, I realized these peaks were not the good choice. Time to shift gears. Snotel was reporting over 7 inches of snowfall in the Sierra Blanca at 10,650′. With spring storms like this, I knew 7 inches could mean a lot more up high. This storm could be what I needed to cover Blanca. Chris and Pam decided to pass this one up. So, I scrambled to find partners. Tom Runcie and Brennan Metzler rose to the occasion, along with AE Films crew Dave and Keith. To ski Ellingwood Point and Blanca Peak we would go!

We camped at the two-wheel drive parking on Como Lake road, and then drove up as far as we could get early in the morning. A combination of snow and increasing difficulty of the road forced us to stop at 8,800′, where we had stopped just a week and a half ago on our Little Bear trip. However, this time, we were able to skin right from the car- a surprise that everyone enjoyed.

Dave and Tom pause past Como Lake, checking out our goals for the day- Ellingwood on the left, Blanca on the right. Everyone was surprised how cold it was. Temperatures were likely in the teens.

A closer look at Ellingwood. I wish the couloir connected to the top!

When we reached the basin between Ellingwood Point and Blanca Peak, just above Crater Lakes, we dropped off Keith. He was to remain there for the majority of the day, posting as our camera guy. Keith had to endure howling winds and cold temperatures all day, all while standing still in his “camera hole”. Thanks Keith!

Brennan, Tom, and Dave leading the way to Ellingwood.

Tom nearing Ellingwood’s ridge with Lindsey behind on his left and the Spanish peaks in the distance on his right.

Tom on the summit!

From Ellingwood, it is very clear that Blanca dominates.

We stayed on the summit for a while, enjoying the sunshine, checking out the views. Brennan and me.

And proceeded to rip out a pocket of snow which went crashing over the cliffs below us.

Looking at the pocket that Brennan ripped out from below.

After a break in the basin to eat some food, we headed back up for Blanca.
Though this peak is 300 feet taller than Ellingwood, the peak itself on Blanca is physically closer, and therefore took less time to reach than Ellingwood. Brennan skinning up.

Brennan and I approaching the summit.

As can be seen in the pictures, poor weather was moving in. Winds increased and the already cool temperatures got colder. We did not last long on the summit. View from the summit.

Me, navigating through the upper rocky section.

Past the rocky section, snow was abound. Tom dropped first, and I missed photos of him. But, I did manage to grab a few of Brennan on his way down.

In the basin we re-grouped. Our day was a success. Fourteeners #48 and #49 were done for me, and I now have 5 more fourteeners left to ski. Keith was pleased with the footage we’d gathered. Tom was happy to have tackled his first two fourteeners ever (he didn’t really know what he was getting into when I suggested he come along with me this weekend). And Brennan was happy to have boarded some fourteeners in pow.

Heading back to Como Lake.

A look at Baby Thunder couloir, where we had been skiing just a week and a half before. Pam lost her ski in the hanging snowfield at the top of the couloir to the right. I caught it just before it went sailing down the cliffs below.

Back at the valley floor, the weather was warm and nice. A huge contrast to the cold temperatures we’d endured all day long. Sunsets are beautiful on the plains too.

Thanks to Tom, Brennan, Keith, and Dave for your support and for making this a fun and successful mission on Ellingwood Point and Blanca Peak!

Just 5 more peaks to finish skiing all the fourteeners in Colorado. It was nearly May. Could I finish them this season?