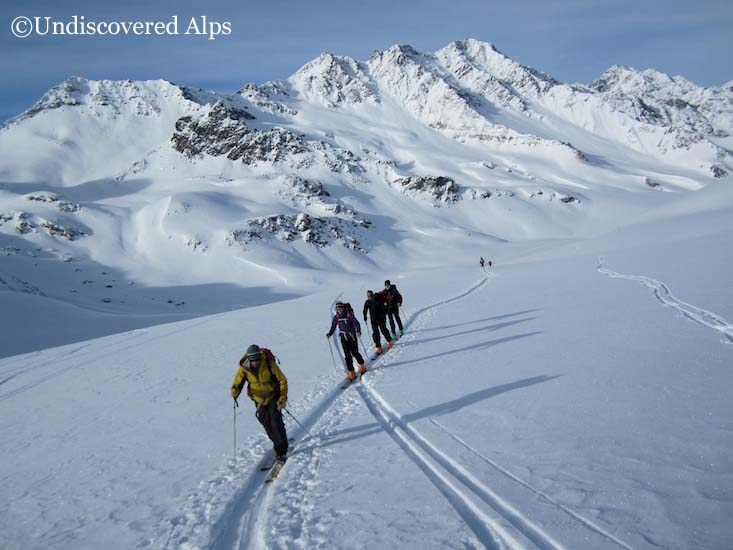 Today we are pleased to post a guest blog about ski touring in the Queyras which is on the border of the French-Italian Alps. We hope you enjoy it!

The Queyras is located in the French Alps on the border with Italy and is one of the oldest mountain ranges of the Alps. It was also one of the last ones to be opened to public tourism towards the end of the 20th century, so is relatively untouched by development.


For ski touring, the Queyras is world class with several summits over 3000m, and a huge variety or ski touring friendly routes for all levels. Access is easy due to the high altitude villages, including Saint Veran, the highest village in Europe at 2042m that you can drive to! Note on this: beware the roads are narrow and windy and entrance to the car park is payable and limited.
Once away from civilization, the summits are served by a network of excellent mountain refuges which remain open throughout the ski touring season offering fully catered accommodation – so no need to carry huge sacks!!
It was March 2014 and, after an incredible dump of snow, it was a rare avalanche risk 5 in the majority of the Southern Alps, including some of the Queyras. Our ski touring clients arrived, rather gloomy at the prospect of all being cancelled due to the conditions.

After several discussions and phone calls between guides and refuge guardians a plan was hatched! We would head up to the Refuge de la Blanche from Saint Veran.


For snow security we chose the cross country ski pistes and wide valley bottom as our route up. In more stable conditions it is possible to skin up to the ridge and then traverse and ski down to the refuge but for today, this was a reassuringly gentle ski in with some wonderful reminders of the culture of this area steeped in history.

There were the rustic stone shepherd’s huts half hidden under the snow, the ancient copper mines and the Claussis chapel (built in 1847), an annual Franco-Italian pilgrimage every 16th July.

The refuge was amazing, nestled on a little plateau at the head of the valley overlooked by the impressive Tete des Toillies 3175m. We watched a group of skiers make tracks in a tempting slope of virgin powder, about a 30 minute skin up from the refuge.
The following day we headed up to the Col de St Veran choosing the least exposed route up. With the ridge being the safest option we chose to continue up to the Pic Caramantran at 3025m, a rather interesting ridge requiring a little bit of scrambling with the skis on the sack.
All along the ridge it is possible to ski with one foot in Italy and the other in France and it’s easy to see why this ridge is the border!

The view from the summit was magnificent with a view of Mont Viso, the highest mountain of the Cottian Alps 3841m.


The risk of avalanche was too dangerous to head over the ridge and into the big bowl and down to our planned objective, the Refuge d’Agnel so we decided to do a loop into Italy and come back over the col back to the Refuge de La Blanche. This allowed us to take less exposed, gentler slopes. The untouched powder of the Refuge D’Agnel was left for another day.
Yes our tour was limited by the conditions but we still got out and we saw the potential. We will be back again this year with more clients and fingers crossed we’ll have tip top conditions this time!
The flexibility of ski touring options in this area with the added attraction of being on the border of two countries, each with their own definite culture and history makes the Queyras a world class ski touring destination and definitely one to add to the list. This article was written by Sally Guillaume who runs independent holiday company Undiscovered Alps, specializing in activity and adventure holidays in the Alps.

One thought on “Guest Blog: Ski Touring in the Queyras – in the Alps”