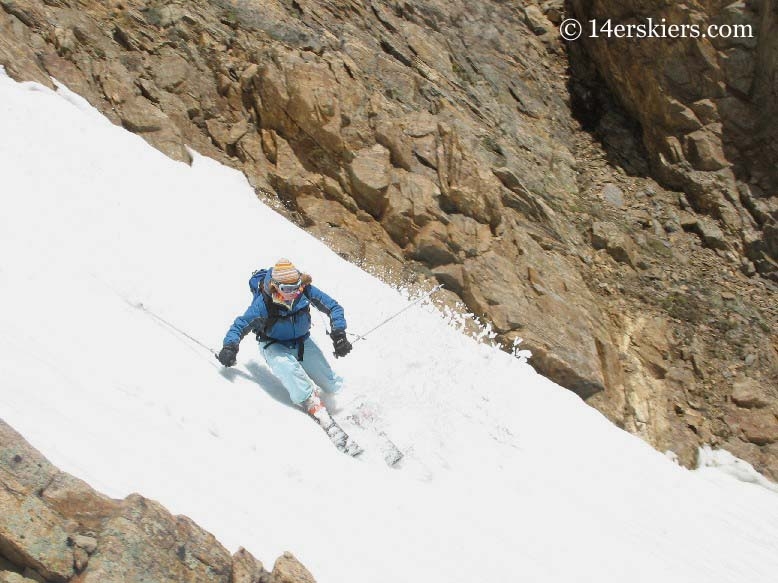 Mount Elbert was my 4th fourteener to ski. We descended via the Box Creek Cirque. Even though the summer was approaching and I was supposed to be locked onto my bike to train for mountain bike racing, I was already addicted to this project. I decided that fourteener skiing and mountain bike racing simply weren’t going to jive together, so I made it my last year of racing bikes.

Below is a slightly modified version of my original trip report.

Frank and I camped near the Mt. Elbert trailhead the night before our hike. We were rudely woken up in the middle of the night to music playing… Pink Floyd to be exact. The Pink Floyd groupies had arrived quite late and had decided to set up camp next to us. When the sun rose the music was still playing. It’s a shame that Pink Floyd had to be used to disturb my sleep. We were to start our day with only 2 hours of sleep. I told myself that if our Pink Floyd camping neighbors were asleep when we returned I’d sing the Brady Bunch song at the top of my lungs 🙂

We began our hike around 6:30 in the morning. We took Mt. Elbert trail to the summit. Near the bottom the trail was quite steep and passed through a section of forest where hundreds of trees had recently fallen. It was also full of mosquitoes…. and we weren’t even in the Mosquito Range!:)

Frank hiking on a flat section of the trail. 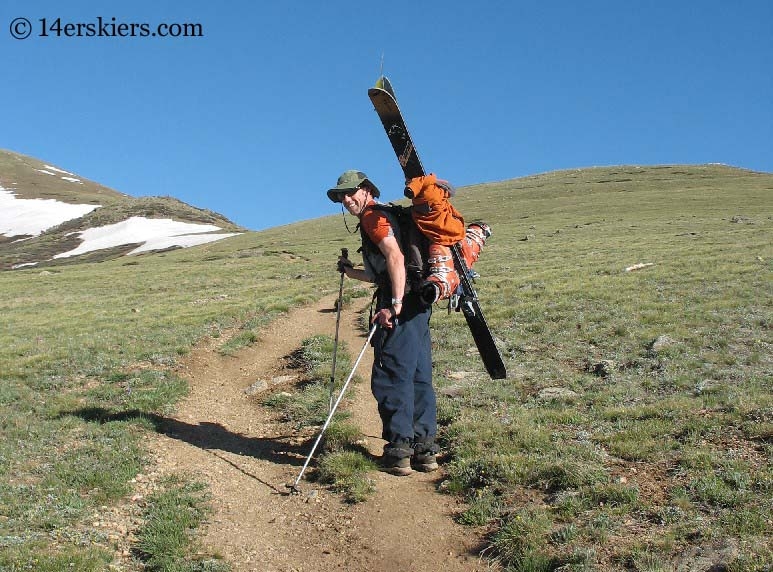 We made good time with our hike at first, but the lack of sleep caught up with us near the top, where we felt sluggish. We boot packed the entire way up the mountain, and we were able to follow the summer trail most of the way.

We reached the summit around 10:30 am, where the views were spectacular, especially of La Plata. We hung out there for awhile talking to tourists who were surprised we’d hauled our skis all the way to the top of a 14er. Frank & I on the summit. 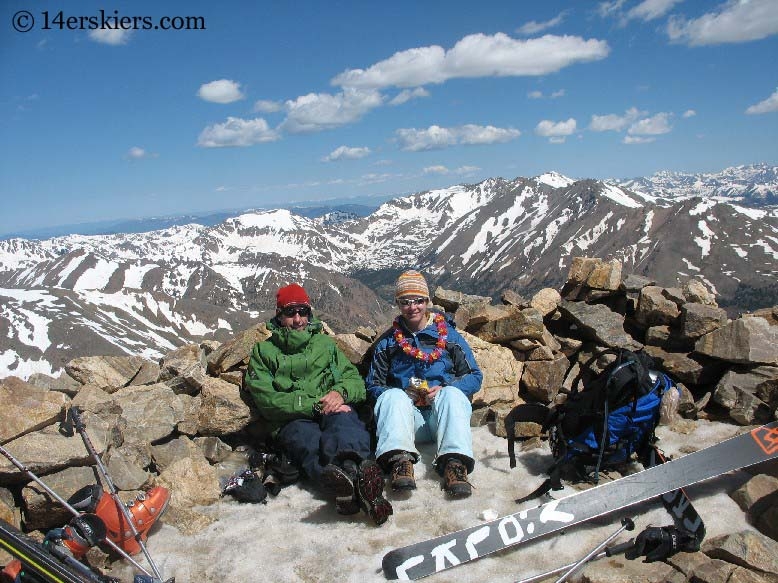 La Plata was screaming my name… and that became the fourteener I wished to tackle next. 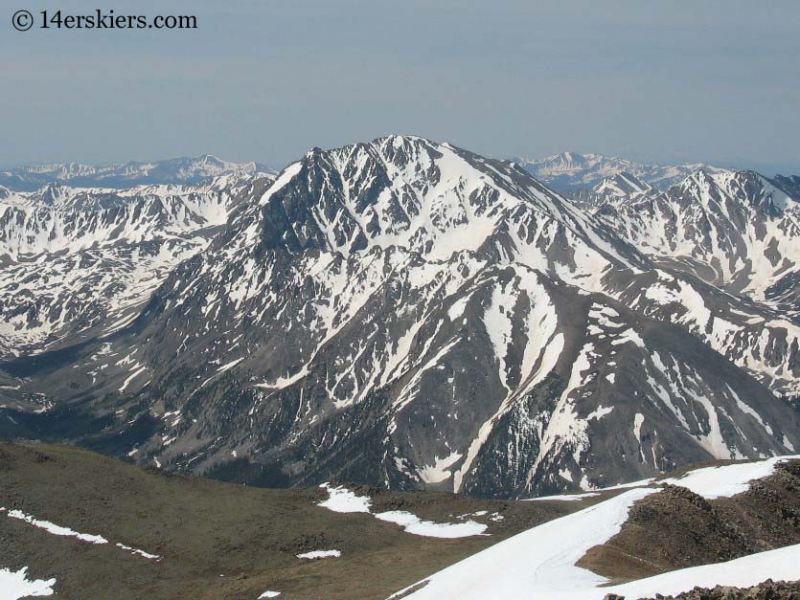 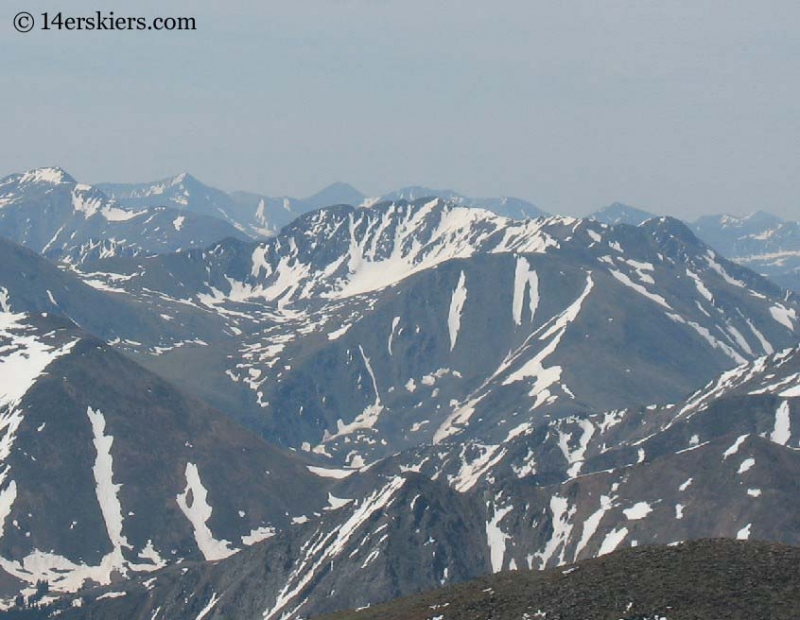 Turns from the summit. 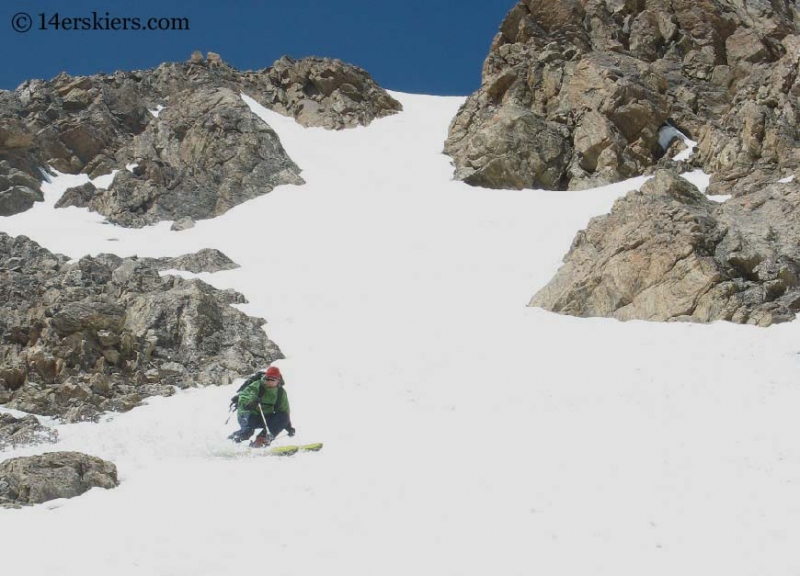 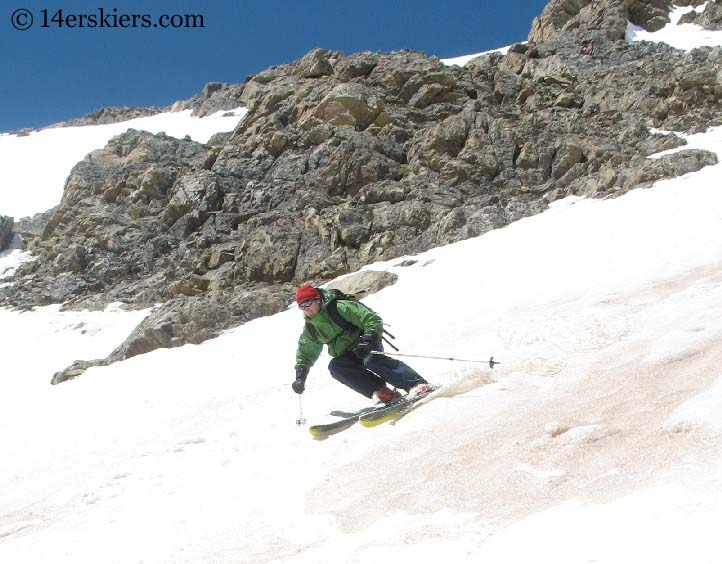 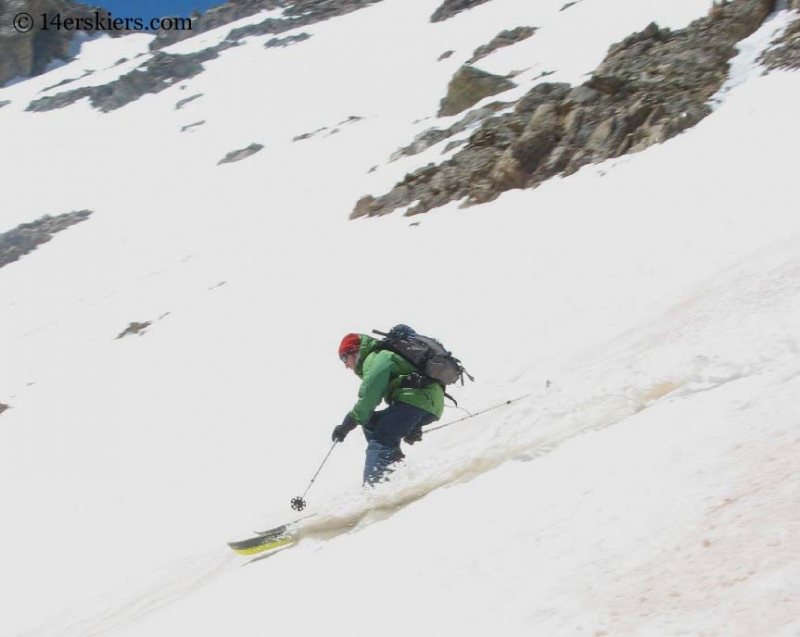 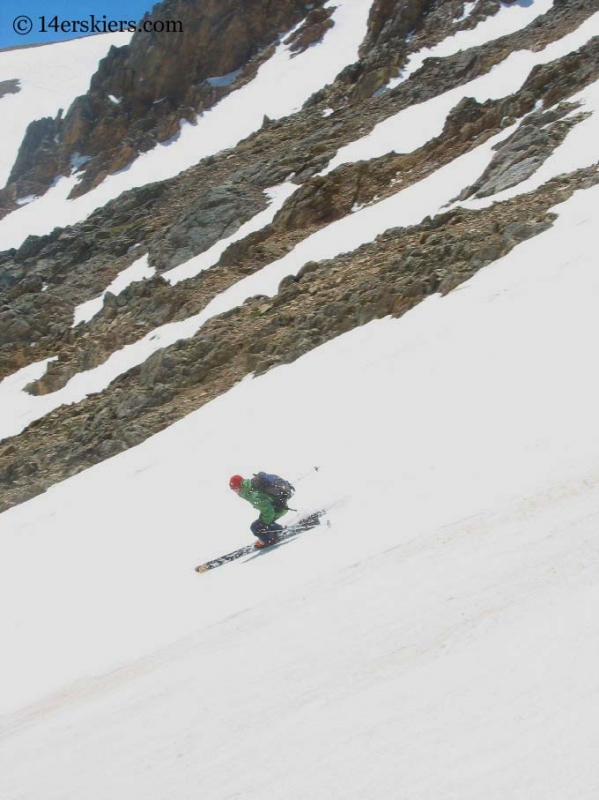 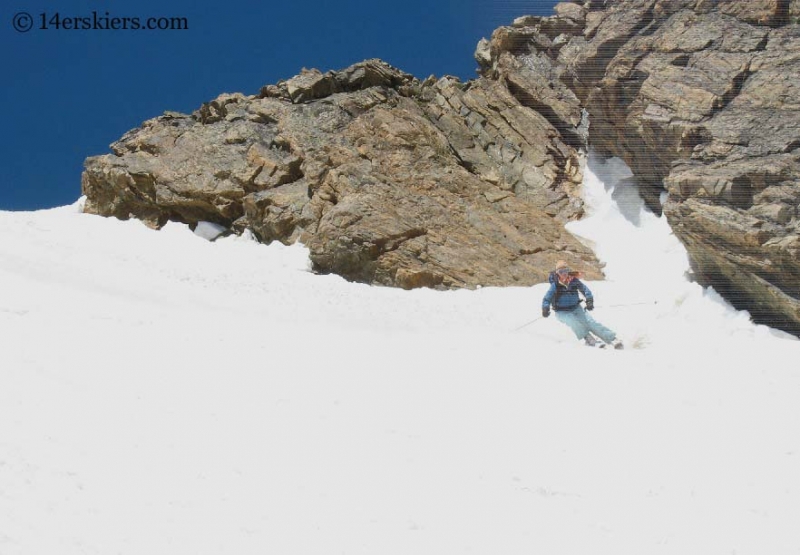 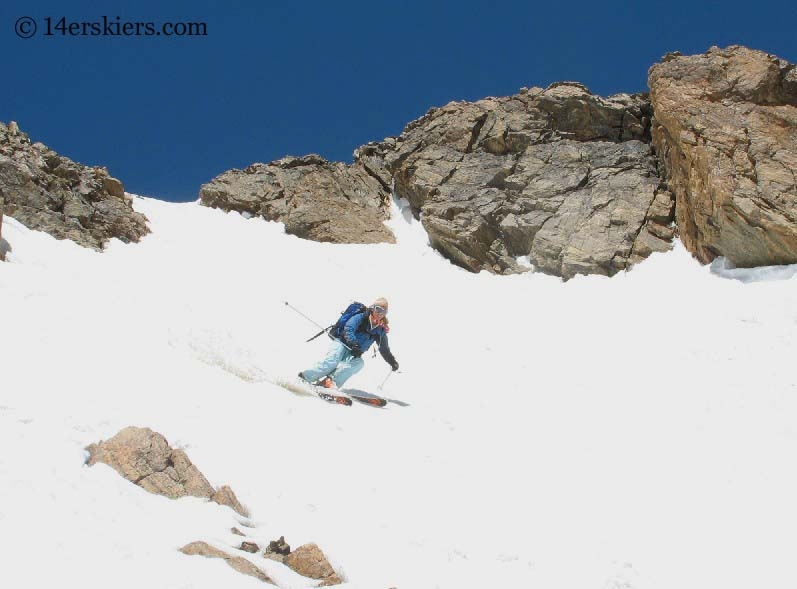 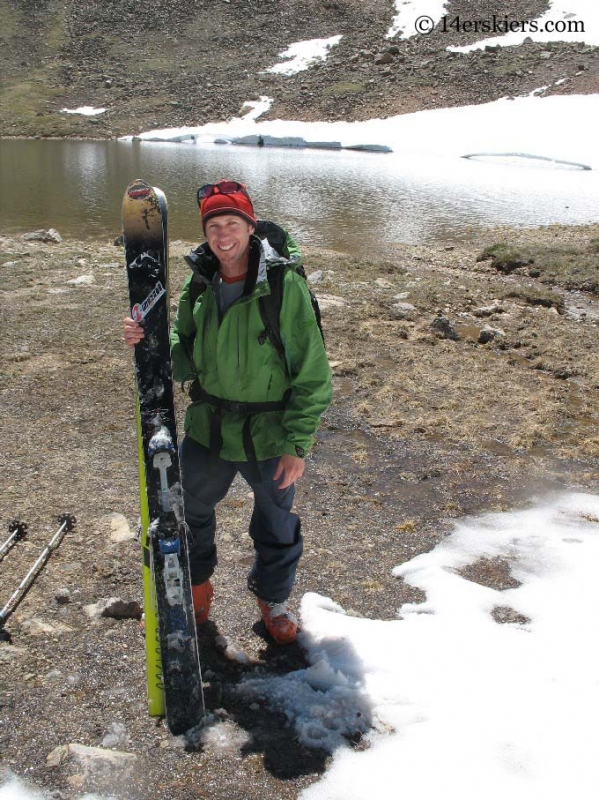 A view of the Box Creek Cirque as we hiked away from it. 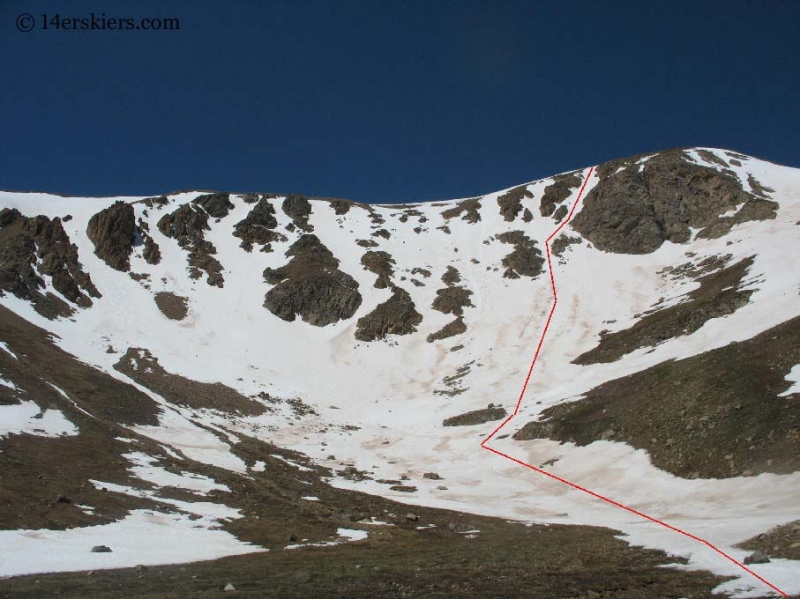 We hiked the trail the rest of the way down. The hike down was pretty quick and relatively easy, and we were back to our campsite by 1:30 pm. It was hot, so we sat in the shade drinking beer for awhile before parting ways to go home. While sitting in the shade, a Texan chatted with us for awhile, and bragged to us that he’s climbed Mt. Elbert 40+ times, the SAME way each time 🙂

On my way back to the Front Range, I stopped along HWY 24 to take a picture of Mt. Elbert. A horse came to say hello as I was taking my picture. I pet the horse for awhile, but eventually, like all things, I had to say goodbye. 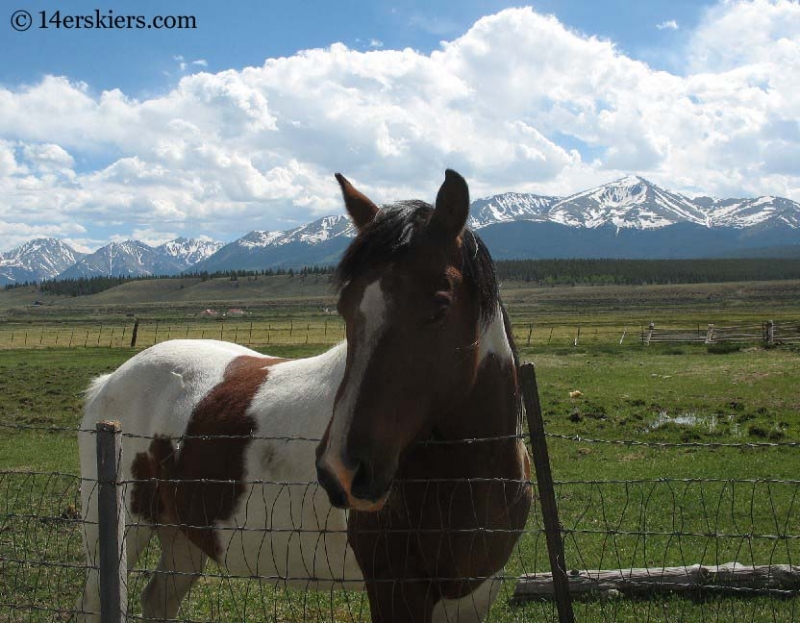 And the actual picture of Mount Elbert I was trying to capture: 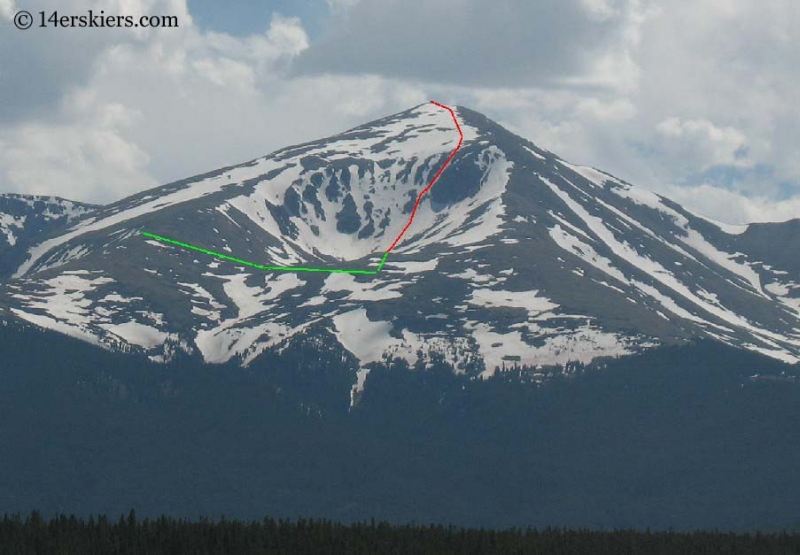 Mount Elbert may be Colorado’s highest fourteener, but it’s far from the hardest. I wasn’t done skiing fourteeners even though it was June. I still had more to check off the list that spring. But, Frank and I would return to Mount Elbert a few different times – not to ski, but to bike. It’s one of the few fourteeners that is not in Wilderness and bikes are technically allowed, although not common.