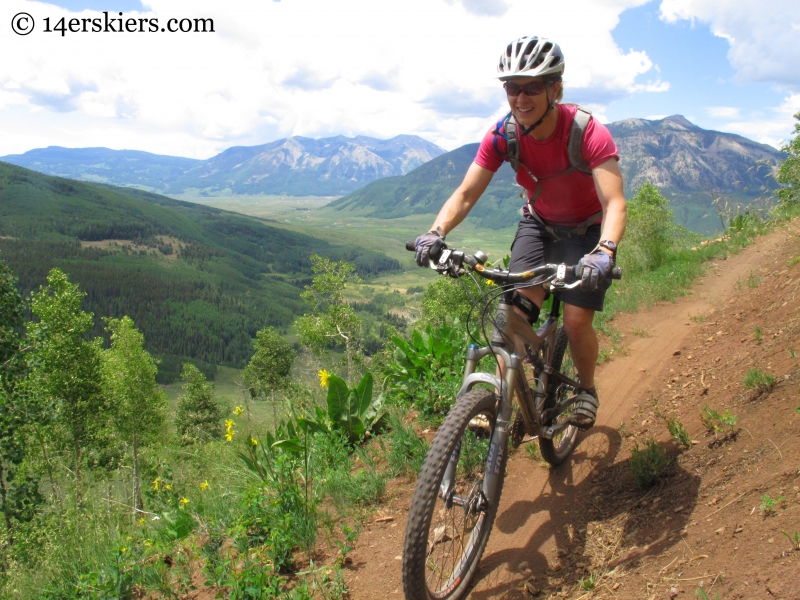 Teocalli Ridge was a favorite mountain bike trail of ours before it was closed a little over two years ago. The National Forest Service temporarily shut it down to reconstruct part of the trail which had been eroded – erosion that was partially due to dirt & mountain bikers, partially from weather, and partially just due to trail design. The Teocalli Ridge trail had been closed for so long that people were beginning to forget that it was even an option. But, on July 1st, I heard that people were riding Teocalli Ridge, and I was happy. In fact, I was ecstatic. I was ready for one of my favorite trails to be open again.

Frank and I stayed clear of Teocalli Ridge over the 4th of July weekend with fears that it would be crowded with people. As it worked out, a couple of friends of ours were visiting mid-week and jumped at the chance to ride this trail with us.

Oh Teo, how I’ve missed you. 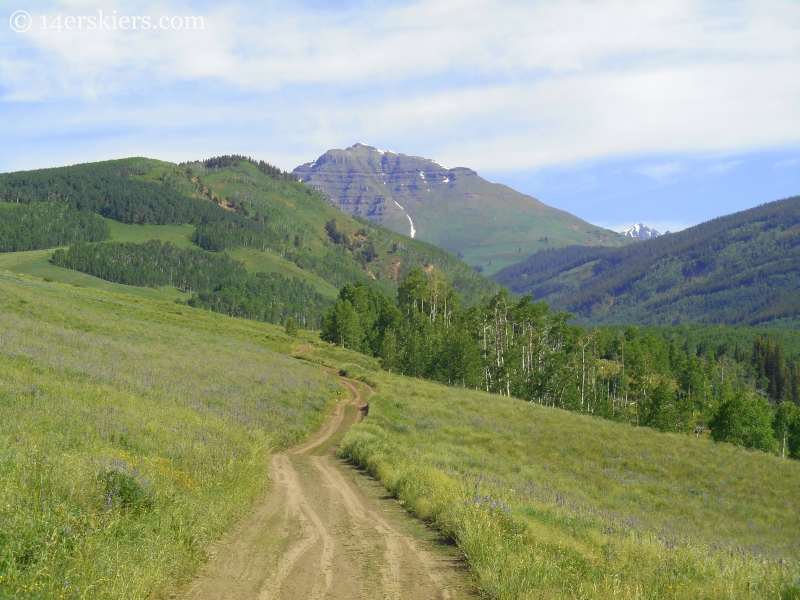 The ascent hadn’t changed much. It’s still a long, grueling, and steep climb to the top of the ridge. But, the trail was in good shape- not too loose and mostly rideable. 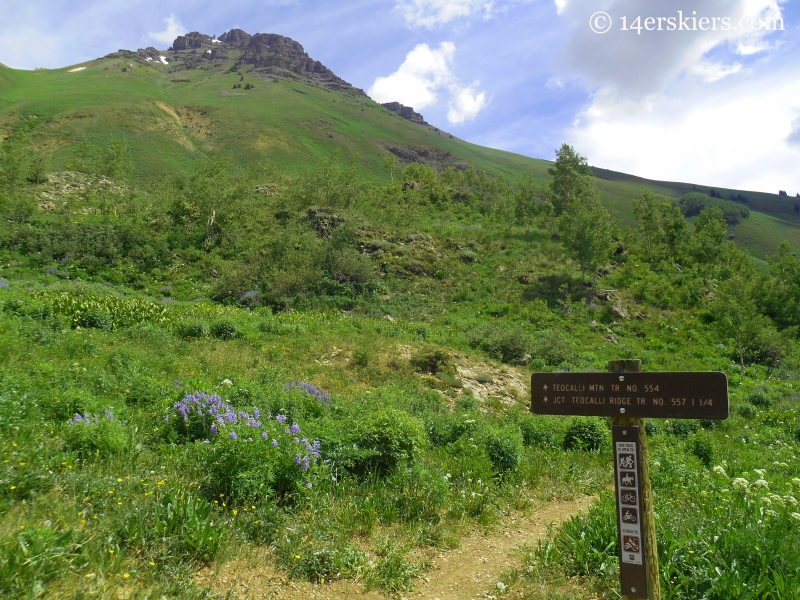 Better yet, the pain of the climb was tempered by the beautiful wildflowers and views that surrounded us. Grete. 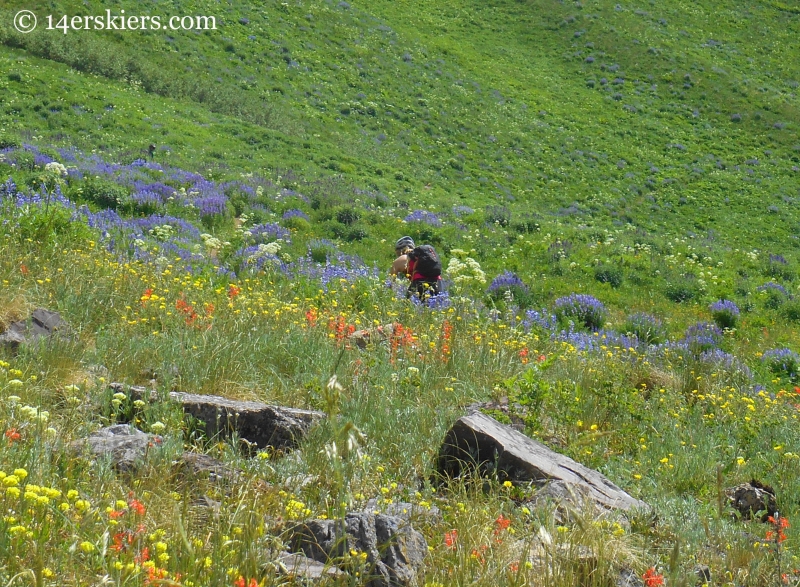 Grete is a tall girl, minusculed by the grandeur of the scenery. 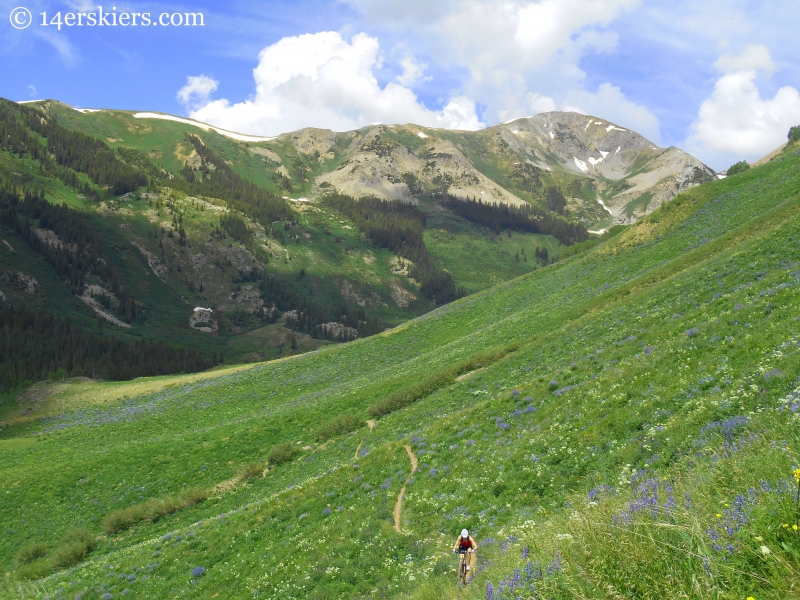 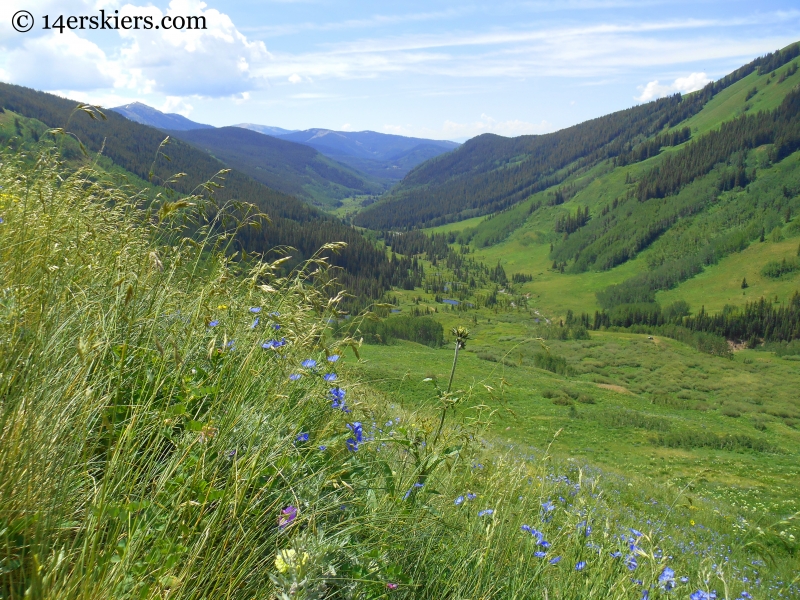 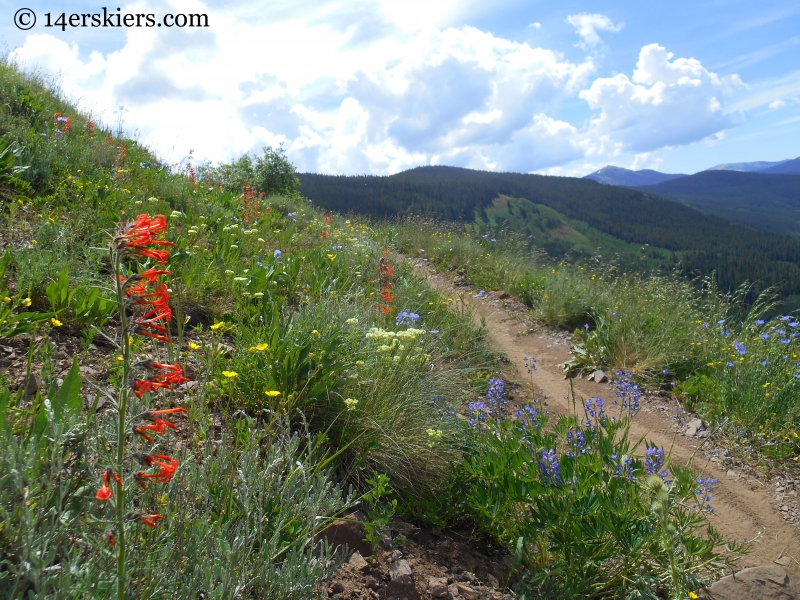 The last bit of the climb was longer than I remembered. But, I remembered the view. How can you forget a view like this? On top of the ridge, we gazed upon the Brush Creek Valley toward Pearl Pass. 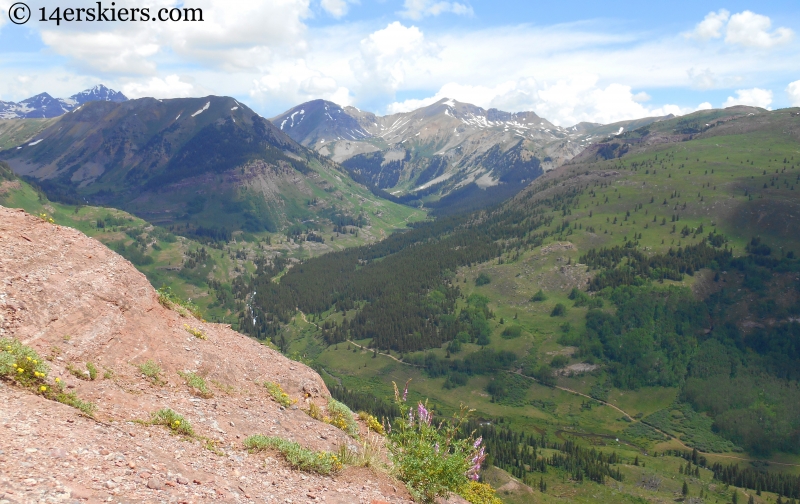 Then, there was the descent. That’s what we came for. I think Grete likes it 😉 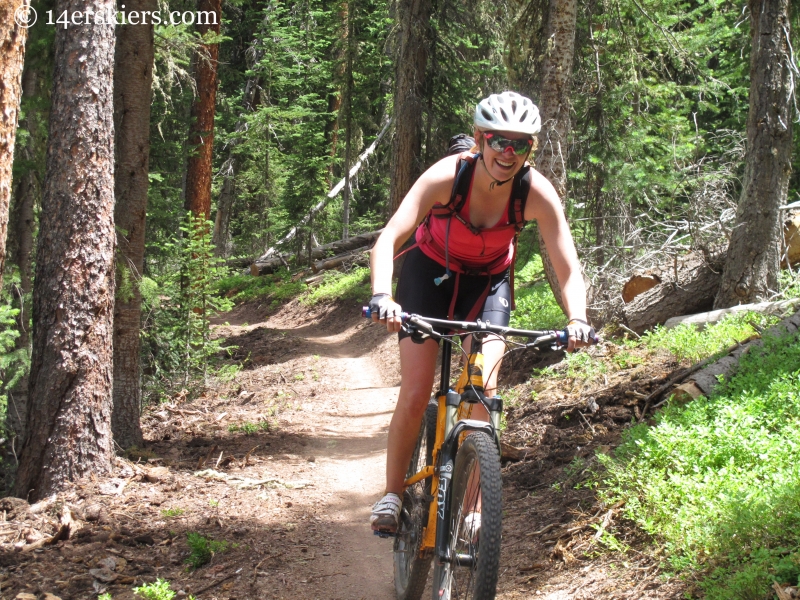 The first part of the descent remained the same as the old route. However, the trail had been significantly improved – widened in places, ruts removed, and cinder blocks used in some areas to prevent future erosion. But, around here, the “new” trail started. Zach. 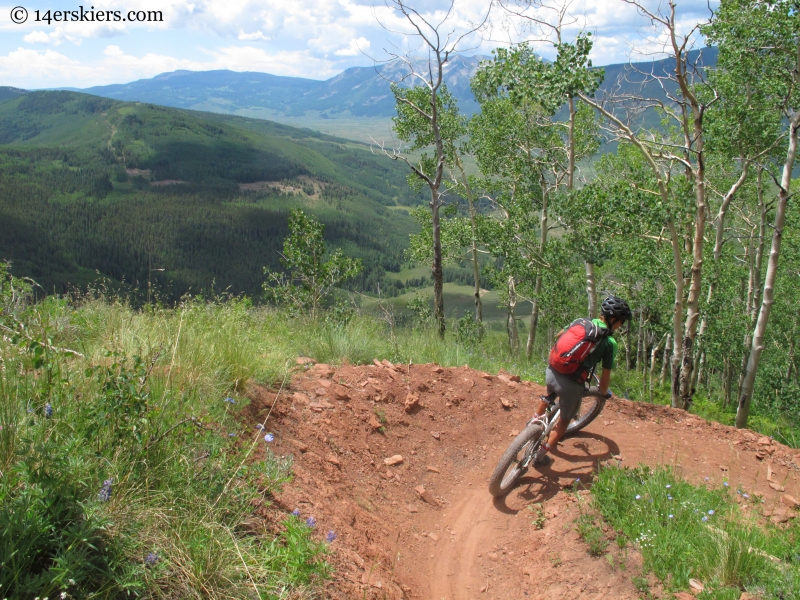 The new part of the trail was built with moderate steepness, and a series of switchbacks that make their way down from the ridge to the valley. Frank. 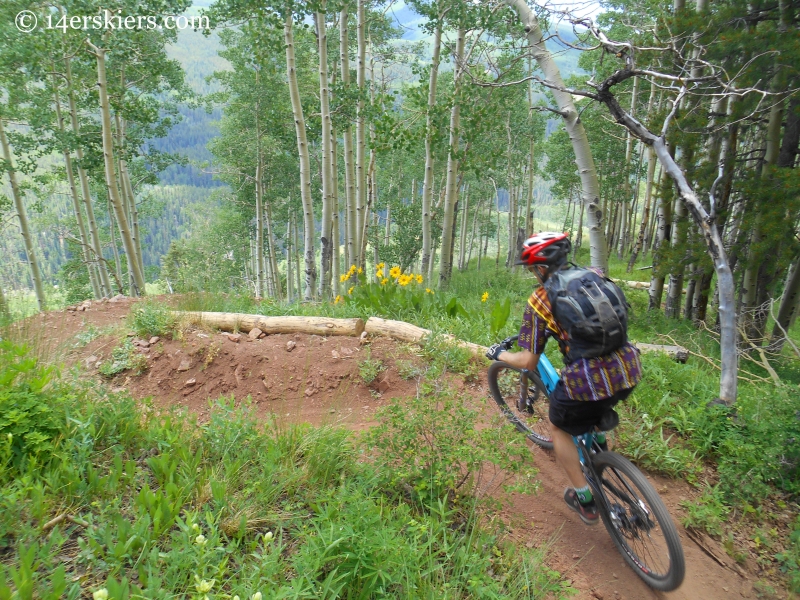 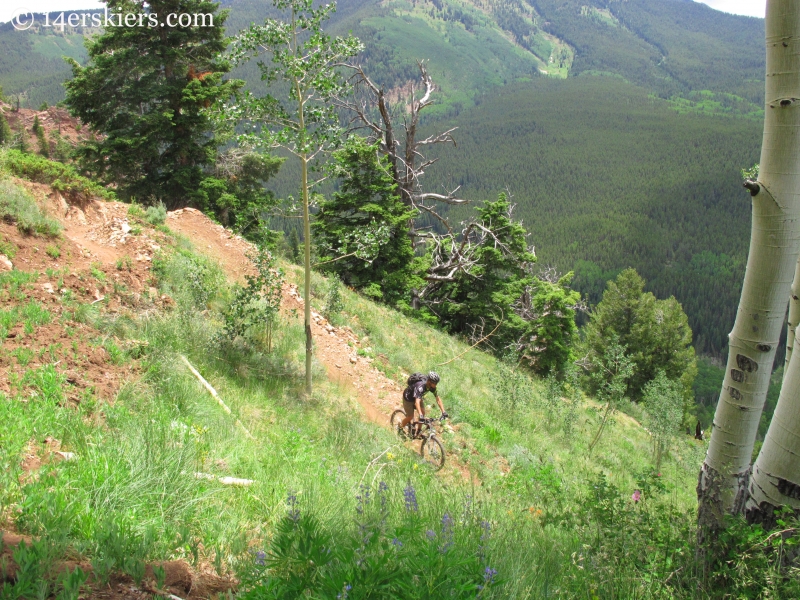 The trail eventually merges back with the old trail, opening up to an amazing field currently covered with spectacular wildflowers. Frank. 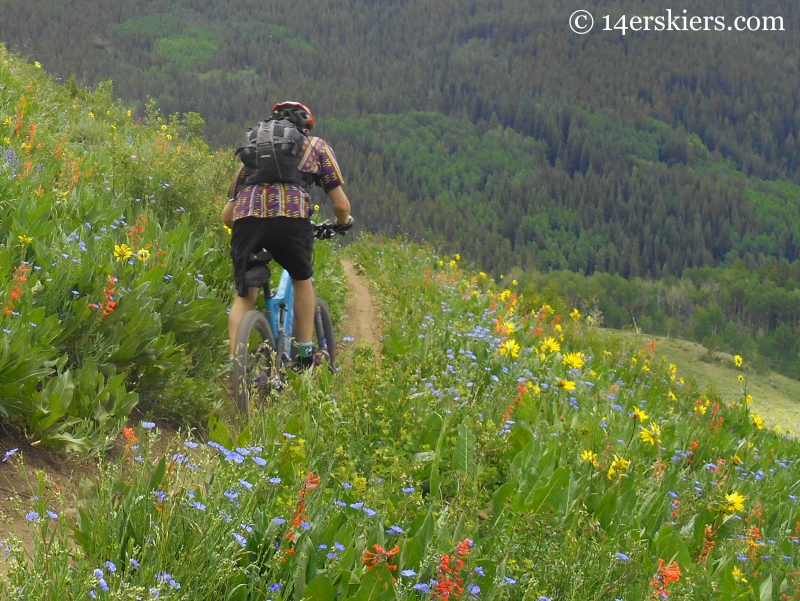 Me among the wildflowers. 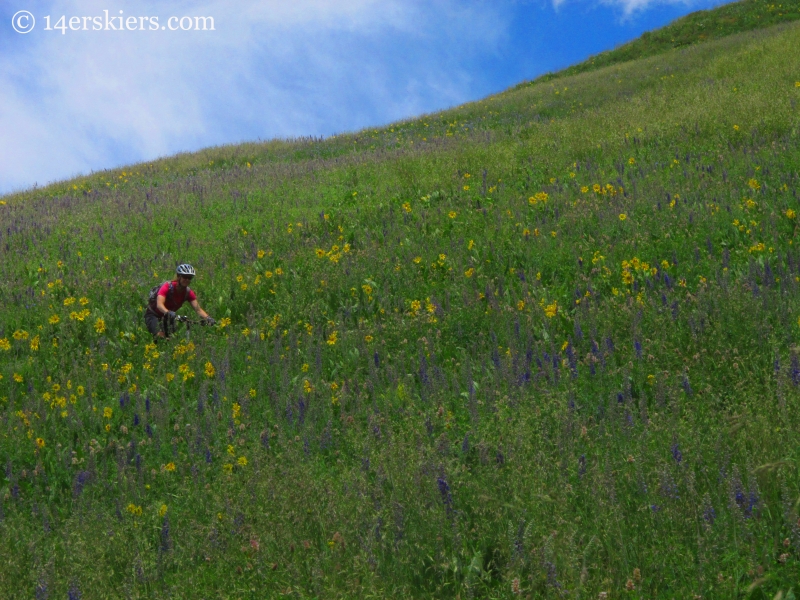 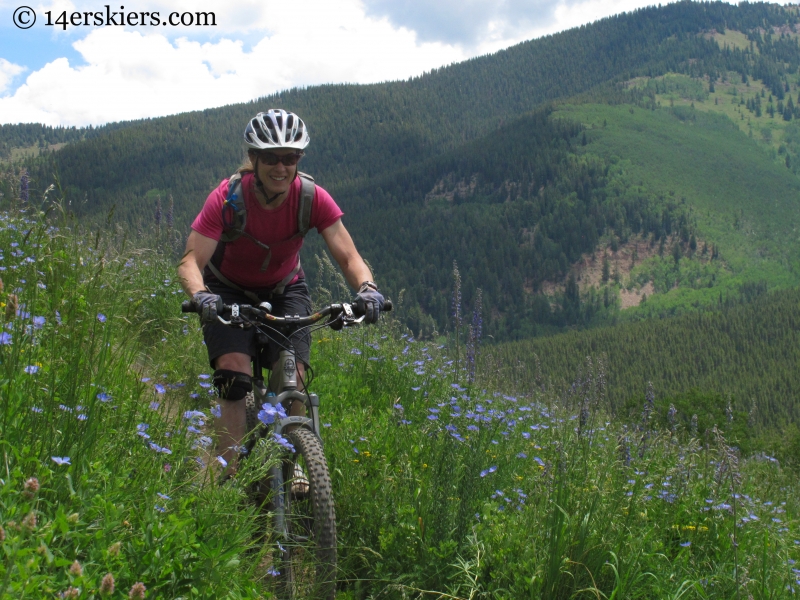 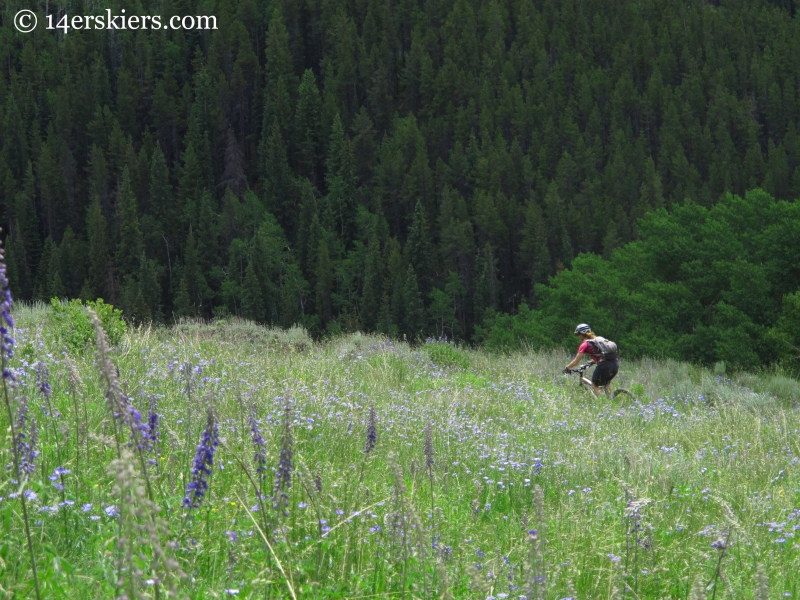 Frank finishing off the single track. 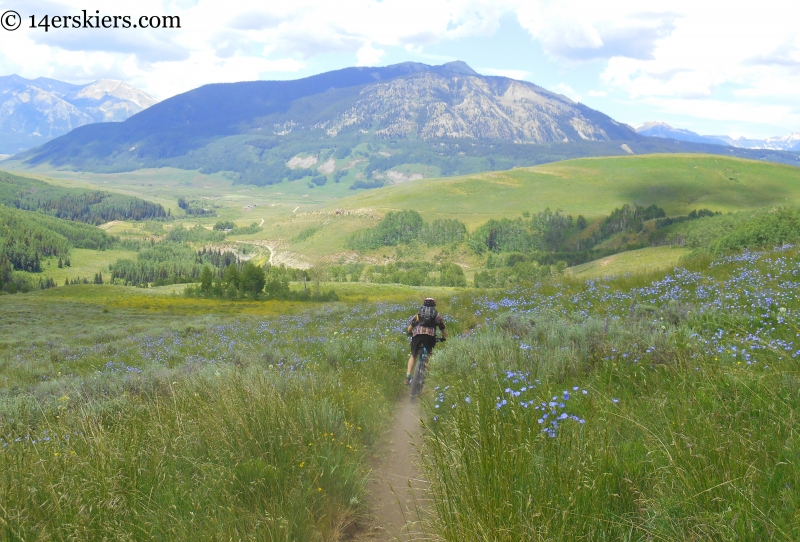 After Teocalli Ridge trail, we headed toward the Canal Trail and Strand Bonus – always better to finish off the ride with a bit more single track than road. For those wondering, the Brush Creek stream crossing is possible, but not for the faint at heart.

So, what do we think of the new Teocalli Ridge descent? Well, we like it. The people who constructed that trail (National Forest Service) certainly put in a lot of work. But, to be honest, we kind of miss the old trail too. We miss the technical parts that were inherent in the old trail. The new trail is smooth, and buff, and well…. easy. Almost too easy. I’ve seen some people refer to this trail on Facebook as “techy”. That, we do not agree with. Doctor’s, 409 1/2, and Ferris are all considerably more technical than the new Teocalli Ridge Trail. But, that may change as the trail erodes and takes a more natural shape. Also, the switchbacky section in the new part of the trail had occasionally abrupt flow which again might change as the trail is broken in with riders. However, we would still call this trail fun. The views are magnificent. And we’ll definitely be riding it again soon 🙂