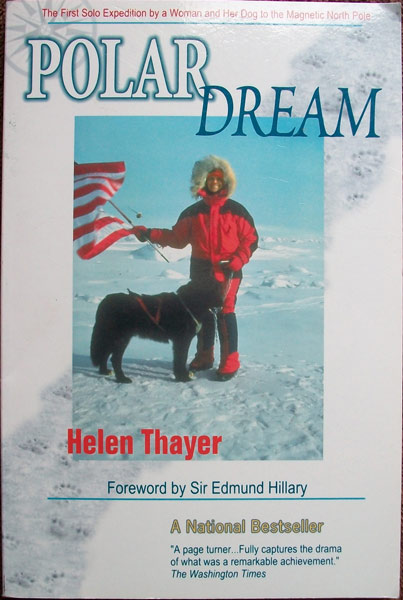 Why would anyone want to venture to the North Pole on foot, solo, spending 27 days in unimaginably cold temperatures, facing numerous polar bear threats and polar storms? Thayer explains why from the get-go. Her reason was to inspire and to educate. But, after thumbing through page after page and suffering along with her, it’s obvious that Thayer soloed to the North Pole for one simple reason -she wanted to see if she could do it. Traveling to the North Pole solo was a personal challenge, and one Thayer did not take lightly.

This book is an autobiography of Thayer’s voyage to become the first woman to solo to the North Pole – and it has it all. Thayer of course makes it to the North Pole and back – otherwise the book would not have been written. But, along the way, she suffered through frost-bitten hands, fear of polar bears, starvation, and perhaps the greatest challenge of all – being alone in an inhospitable part of the world. She accomplished her goal prior to the days of reliable GPS systems, so navigation was a challenge as a compass was basically useless.

Polar Dream is a lesson in the arctic. Through Thayer’s adventure, readers learn about the brutal climate and the rare wildlife. They learn about the arctic ice and its associated dangers, and how it also provides a haven for hunters. Even while the harsh arctic climate caused Thayer agony over and over again, she still spoke highly about this beautiful biome. She knew all along she was just a visitor and had to adjust accordingly to life in the arctic.

Thayer’s only companion was a dog she named Charlie, whom an Inuit persuaded her to bring along to guard against polar bears. And guard he did. Thayer might not have survived without Charlie. This book is as much about the companionship an animal brings as much as a book about overcoming adversity.

The challenges Thayer faced throughout her travel are simply amazing. Just when you think the worst is over, the worst gets worse. I personally cannot believe what Thayer suffered through. If it were me, I would have thrown in the towel. But, Thayer prevails through her own personal challenge, proving that not only is she physically strong, but also mentally unbreakable.

Polar Dream is a great book for those looking for a story about a great adventure, about overcoming adversity, and about digging deep for that mental strength you didn’t know you had. Let Thayer take to you to arctic. It’s worth the visit!

A video slideshow of photos Thayer took during her arctic voyage:

A video capturing some of Thayer’s arctic photos along with an interview of Thayer herself: