Movie of the Month: Riding Giants

Where can I find it? Amazon.com and Netflix 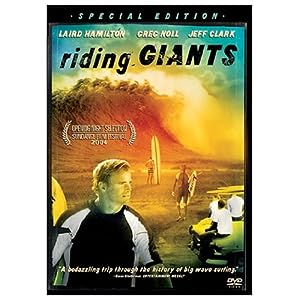 I have surfed before, but I am by no means a surfer. Still, it’s undeniable that surfing and skiing share many of the same characteristics. Riding Giants isn’t a ski movie. Instead, it’s a movie that follows the history of surfing from the Polynesians to Laird Hamilton. But, any true skier will love the adrenaline-driving footage and will understand the surfer’s outlook on both life and sport.

Riding Giants is a play on words having a dual meaning. The movie features the love of surfers constantly searching for that perfect big wave- always looking for more, just like skiers keep searching for the perfect run on the perfect day. But, the movie also highlights some of surfing’s greats like Greg Noll, Jeff Clark, Mark Foo, and Laird Hamilton.

Riding Giants gives viewers a taste of the surfing subculture and it’s evolution. Just as the first ski bums began to emerge after WWII, so did surfing’s beach bums. As the narrator in the movie states, “Surfing wasn’t something you did, but something you became. Not just a sport, but a statement.” Skiing was undergoing the same evolution. For the first time, groups of people were living minimally simply to enjoy the love of a sport, and in that, living life to the fullest. Often scorned by mainstream society, surfers, like skiers, created their own counter-culture. As Greg Noll said, “The more fun we were having, the more it would piss off society.”

Throughout the movie, surfers describe their sport using phrases to which skiers can easily relate. Surfers describe their meaningful big wave experiences as being as memorable as the birth of their son or daughter. “All I know,” says Noll, “is once you get into it there’s an adrenaline, a stoke, and that high is so addictive that once you have a taste of it it’s very difficult to not want more.” That is the very same high experienced and sought by skiers too.

The movies tells the stories of some of the sport’s greatest surfers. Characters range from the colorful Greg Noll styling his prison-striped shorts to the more solitary Jeff Clark who surfed Maverick’s off the coast of California alone for 15 years. But the most touching story is that of Laird Hamilton. Laird was only 4 when Billy Hamilton spotted Laird body-surfing in Hawaii. It was an instant connection between the two. Laird needed a father-figure in his life and his mother needed a husband. The transition was seamless and a surfing family was born.

Laird Hamilton is the Shane McConkey of surfing. Always looking for the best waves and the best rides required him to think outside the box, just as McConkey wouldn’t limit himself to skiing as we knew it. McConkey revolutionized the sport of skiing with his ski-base jumping and reverse-camber reverse-sidecut skis. Similarly, Laird changed the sport of surfing forever when he developed the idea and technique for tow-in surfing. Tow-in surfing is where surfers are towed to catch a wave by jet-skis. Until this technique was invented, the greatest problem surfers faced was gaining enough speed to catch a wave. The bigger the wave, the faster they needed to be going to catch it. Long surfboards were developed to help surfers gain this speed. But, tow-in surfing allows surfers to come in to the wave already with speed, allowing them to catch bigger waves and eliminating the need for longer boards. Laird was among the first to ditch the bulky long board for a shorter one, with straps for the feet increasing its maneuverability.

Just as skiing has its dangers, so does surfing. There are always dangerous obstacles. Surfers have sharks, skiers have snow-snakes. Skiers have avalanches, surfers can get pummeled by giant oncoming waves. Skiers have terrain traps, surfers can get stuck in dangerous areas like the jagged rocks on Maverick’s. And, just as skiing has lost some of its greats to its own sport like Doug Coombs and Shane McConkey himself, surfing has lost some if its own legends like Mark Foo. But, not all legends are always lost. Surfing, like skiing, often relies on a deep partnership. With tow-in surfing, jet-ski drivers are often saviors to the surfers who don’t quite make the ride down the wave. Similarly, backcountry skiers rely on their partners searching and digging skills if an avalanche should arise.

Inevitably, the best skiers and surfers alike put their lives on the line. When asked by his father why he rides such big and dangerous waves, Laird replied, “I have trained my whole life for this. I don’t want to miss an opportunity.” As Seth Morrison continually states, “Skiing is all I know.”

A skiers life is a surfers life. Ther are both searching for the same happiness, the same thrill. They ride waves in different forms- but whether the form is solid or liquid it’s undeniable that it breeds the same addiction and passion. Riding Giants might be about surfing, but underlying, it’s about living life for the love of a sport.

Catch a glimpse of the Riding Giants experience in this trailer:

One thought on “Movie of the Month: Riding Giants”