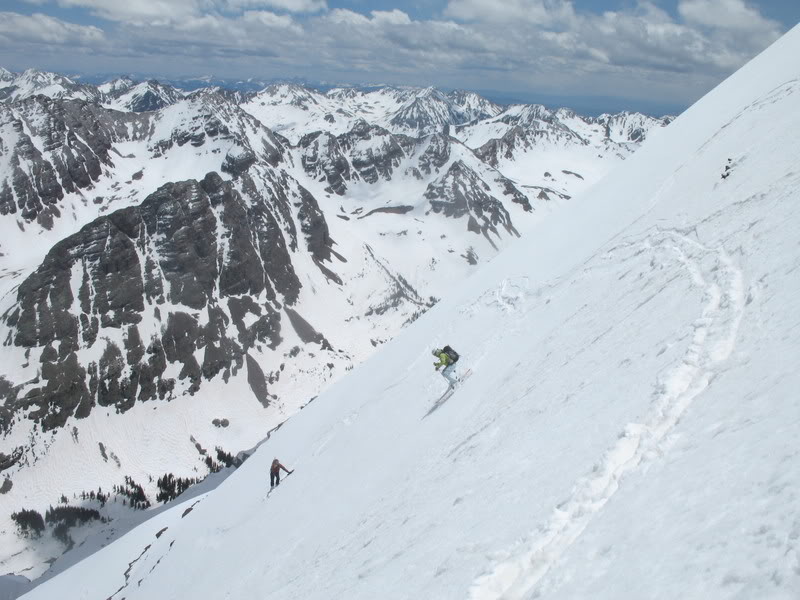 School was out for the summer, and being a teacher at the time, I was happy…. there was more skiing to be done. But my life was in a bit of an upheaval as well. I was in the process of relocating from the Front Range to Crested Butte, where Frank already lived. Besides being busy packing and moving, I was also trying to rent out my townhome. Despite all the craziness, I was dedicated to skiing a few more lines this season. And South Maroon was high on the list. Below is a slightly modified version of my report for skiing South Maroon, which would become my 43rd fourteener skied.

What does it mean when your friends pick you up on the Front Range for the weekend ski and ask you if you’ve brought a salty glass because they have a pitcher of margs to drink on the way up to the mountains? Is that a good sign or a bad sign? Only time would tell 🙂

Well, the signs weren’t so good when we arrived to the Maroon Lake parking lot at 11 pm and it was raining. The forecast of 20% precipitation seemed like a bit of an understatement. We went to sleep and somewhere in the night rain turned to snow. We woke up at 2:30 in the morning to snow falling from the sky. At this time of the morning (or is it still night?) motivation is always lacking, and the snow didn’t help. Most of us had thoughts of bagging the trip and just sleeping in for a bit. But we have Frank Stern to thank: He motivated us to get going. “We’re here right? We might as well go check it out.”

The recent snowfall made it difficult for us to find the trail in the morning. We lost the trail a few times in the darkness, adding to our time. By the time we arrived at Crater Lake, it was light enough to turn off our headlamps.

When we arrived at the Garbage Chute (which is just below the East Chutes and the Bell Cord), we could barely see that there were even mountains above us.

This was the time of critical decision. Do we go up? Or do we turn around. And then a good thing happened. We saw blue sky!

We figured the front must be breaking up. So, up we went.

The bit of snow and light clouds created some beautiful light. Every time I looked back down the valley, I was stunned by its beauty.

Frank leading the way up the East Chutes.

Part way up, we started encountering snow that was difficult to boot pack in. The rain and clouds prevented the snow from freezing well the night before and we were postholing in “cement”. Around then, two other climbers, Joe and August caught up to us. Joe was a skier, August a climber.

At that time, I was leading the way, but getting tired from the conditions. As soon as August passed, though, I was thankful. He lead the rest of the way to the top at a good pace for the rest of us to follow.

View of the valley from the top of the East Chute. The snow that had fallen in the valley was rapidly melting away.

At the top of the chutes we swung around to the SW side of the mountain and scrambled our way up to the summit.

Me on the summit, Pyramid behind.

I tried to rally the group to ski the SE face on South Maroon. It looked so sweet!

But, the group consensus was for the Bell Cord on South Maroon instead. It’s a classic line, of course, and I didn’t want the group to split up. So, to the Bell Cord we went!

Skiing the ridge to the East Face (which precedes the Bell Cord).

Pam skiing from the summit.

Chris got some great shots of me skiing off the top of that face. (Thanks!)

Pam says she can’t take a picture to save her life. I think she’s lying. I handed her my camera for a bit and this is the results.

Pam skiing down the Bell Cord.

The bottom of the couloir was a bit runneled and laden with debris. But the top was great! When we got to the bottom of the Bell Chord we enjoyed some nice corn in the apron. We hopped over a few deep runnels in search of better snow, but all in all, it was still fun!

It wasn’t long before we found ourselves back at Maroon Lake, with all the tourists asking us “Did you ski?” “Where did you ski?”
“You left at what time???” “You did all this just for one ski run?” “How did you see where you were going in the dark?”
“It snowed this morning?”

Sometimes you think the snow will never melt (end of April):

But, somehow, sadly, it usually does.

My season STILL wasn’t over. Though snow was melting fast, I still had a goal of skiing at least two more fourteeners for the season, so I could begin the following season with less than 10 remaining. What would be next?