One of my more favorite videos to be circulating the Internet lately is this one, which I call “Done Skiing”.

The video portrays a comical conversation between a die-hard skier and guy who’s “done skiing” and will drive 20 miles to go ride his bike on 3-miles of muddy trail, and spend an hour cleaning his bike afterwards. Afterall, “corn is for cobs”. Frank and I, being an avid die-hard skiers ourselves, enjoy this video which mocks the people who are always looking forward to the next season.

I mean, think about it. There’s always those people out there. In August, they’re thinking about skiing. In April, they want to throw the skis away, and bring out the bike. But, what happened to enjoying what you have now? If it’s good weather for skiing, then ski! If the weather’s warm in November, stick with the bike! What’s the shame in that?

So, here I am, pondering these thoughts, and realizing that I’m being my own hypocrite. But instead of throwing the skis away for the bike in April, I want to cling to them. Take the skis away, and I feel like a child who lost her favorite blanket. I keep clinging to my skis, refusing to put them away in the closet for the season. I am in denial of the fact that it’s June, and that even the hard-core skiers have hung up their skis for the season. I’m an addict, after all, and skiing is my drug. I belong in rehab, really. Every week, I find myself hiking farther and farther on dry ground to go seek a few turns on the dirty spring snow that we call “snirt”. But, I don’t care. I’m not done skiing 🙂 It doesn’t matter that the grass is green all around me. There’s still snow in them there peaks! 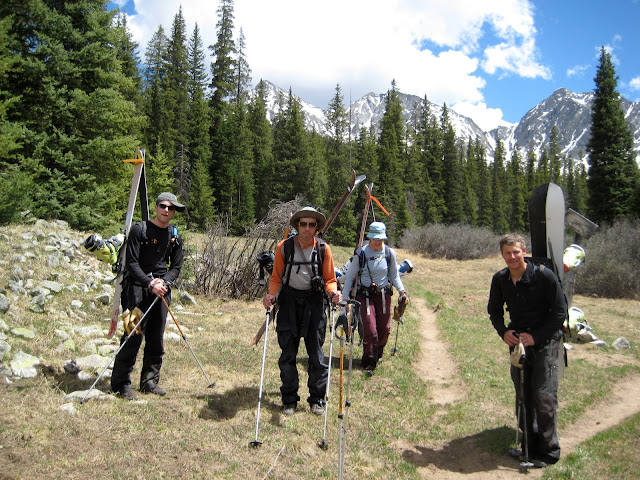 Maybe I’m trying to make up for lost time? I mean, my season did get cut in half last year by an ACL tear in February 2009. I missed my favorite time of year to ski- March, April, and May. Or maybe it’s that I love skiing more than I love doing anything else on this earth? Or, perhaps it’s the simple matter that I’m just too lazy to get back on the bike. My butt has barely touched a bike seat since November and I know it will kill after my first few long rides. Maybe it’s because the bike doesn’t inspire me like the skis do. Maybe it’s all of the above.

But, when does the skiing stop? If I could have it my way, I’d ski all year round, in a permanent winter/spring. Forget summer and fall. Who needs them anyways? I live for the fluffy white pow, or the round mushy corn. I’ll take either one really. I’ll even take that confidence-inspiring carvable styrafoam. Still, there always comes a point that I really do get “done with skiing”. In 2008, that point happened after skiing Snowmass. The snow was manky, and the hike out was miserable and long, carrying 60+ pounds on my back for 12 miles (including skis and boots), postholing through wet snow, and then still having to hop in the car and drive 3 hours home. I was tired of it. Tired of the hiking, the weight on my back, the postholing, and the driving. I nearly came to that point this past weekend, after our expedition on Ice Mountain (TR coming soon!)- where we lost the faint trail and bushwhacked through the forest for hours, crawling over fallen tree after fallen tree, postholing through hundreds of patches of slushy snow, and marching through bog after bog of mud and bacteria-filled marsh, and crossing flooding stream after gushing stream. My feet were so wet I thought I was going to get “trench-foot”. Still, I amazingly came out of the whole scenario with a smile on my face. I mean, after all, I’m lost without my skis 🙂 So, I guess I’ll just keep on skiing… until I’m finally “done skiing”… and hopefully keep a few of you entertained along the way 🙂

One thought on ““Done skiing”?”