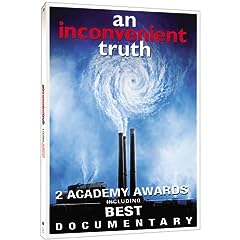 Movie of the Month: An Inconvenient Truth

Where can I find it? Netflix, Amazon.com, climatecrisis.net

An Inconvenient Truth is inspired by Al Gore’s global warming campaign. Since an accident almost claimed the life of his six-year old son, Gore has vowed to try to make this world a better place. Since college, Gore has shown interest in the research and science behind global warming. As Vice President, Gore continued his interest and was a political leader in global warming policies. But nothing has been stronger than Gore’s current campaigns.

An Inconvenient Truth documents Gore’s recent campaigns where he educates people about global warming. His goal is to campaign as hard as he can about a subject that he believes is one of the most important global issues. In this campaign, he educates regular people about global warming. Afterall, he states, the only way he knows how to tell the story is to impact one person at a time. This is Gore’s campaign.

In An Inconvenient Truth, Gore breaks down the science of global warming, making it understandable to the average person. He avoids scientific jargon and makes the points plain and simple. The throws myths out the window. For instance, Gore addresses the myth that some scientists believe global warming is not happening. That simply is not true. He also highlights scientific research in CO2 and climate change. Paleoclimatologists have long recognized the correlation between rising CO2 and rising temperatures. Many people think that the earth can handle today’s skyrocketing CO2 levels, as it is just the same as a cycle in the past. But, what most people don’t know is that climate records have never shown the CO2 levels being much higher than 300 ppm (parts per million). What are today’s levels? 387 ppm according to 2008 Mauna Loa studies. As far as we know, CO2 levels have never been this high. How is the earth going to handle it?

Gore goes into details about what will happen as a result of temperatures rising. Many of our biggest cities will be under water. The global ocean circulation will shift, causing weather patterns to shift drastically. Rising ocean temperatures will allow storms to absorb more moisture causing more drastic disasters like hurricane Katrina. We’ve all heard these stories before, but Gore brings these to reality.

Gore addresses the issue that US citizens are energy whores. Per capita, we use the most energy compared to any other country in the world. European countries use about half the energy we use per person. With countries like China and India on the industrial rise, we need to set a good example of our energy use.

With these things in mind, Gore states that we already have all the measures we need in place to reduce CO2 levels back more normal levels. He makes it clear that we all need to do our part and that we all need to spread the word about global warming. How can you make a difference? Find out on climatecrisis.net.

Global warming is no doubt happening. Here in Crested Butte, we had some of the warmest temperatures in January and February this year than has ever been recorded. If this rise in temperatures continues, we will no longer be able to enjoy our favorite sport of skiing. Even worse, future generations will not be able to enjoy it either. On top of this, global warming is a major factor in the spread of beatles which are killing our forests. Soon, we may not even have forests due to this devastation. Global warming will impact each and every person on this planet. Please do your part to prevent it!

You can also purchase the book here: