When I woke up at 3:15 am, after not having slept really the whole night, I was wondering why the heck I like doing this. I couldn’t remember. It had been too long. It was too easy to crawl back into my sleeping bag and just sleep the day away. But, as the day went on, I began to remember. I like climbing up steep couloirs. I like standing on top of that mountain and seeing nearly the entire state of Colorado beneath my feet. I like to see just how many other fourteeners I can recognize and decide what I should ski next. I like the feeling of my legs being so tired I can’t make another step. I like feeling my arms trembling from jamming the ice axe in the snow/ice so many times. It’s weird, I know. But I like it. It’s who I am.

What’s in a name?

Many say that Kit Carson is named after the Wild West “hero” who was known for his success in battles against the Native Americans and Mexicans.

But others say different. The mountain soars over the tiny town of Crestone. Crestone locals say that the mountain known as Kit Carson was the namesake of the town, and in fact is NOT named Kit Carson, but rather Crestone Peak. But wait, there’s already a Crestone Peak! And, besides, according to the BGN, they will no longer name a mountain a Peak. It seems that somewhere back in the early 1900’s the names of Crestone Peak and Kit Carson got confused or switched somehow. No one knows how it happened. But, Crestone locals swear that a change has happened. They have taken the mistaken so personally that they have filed an official name change request with the BGN, offering Mount Crestone as a replacement name for Kit Carson.
More details can be found here: Crestone Eagle Newspaper

Kit Carson was Lou Dawson’s final peak which awarded him the success of being the first person to ski all of Colorado’s fourteeners. I think I know why it was his last peak. It’s remote, and the approach is long. Timing is everything as the only skiable lines require skiing a southeast face from the summit, which is difficult to find in condition. If the wind hasn’t blown all the snow away, then the sun has melted it. If you wish to make this a one-day trip, that means a very early start (avoiding the typical wet slide activity typical of east aspects) and a very long day. And what a long day it was!

Early light across the valley.

The trail was largely snow-packed for the first 1000’. Skins could have been used but we found that the trail had been so packed down by hikers to the Willow Lake that we were faster on foot. When the trail rounded a ridge which was a more south-facing aspect, the snow and dirt were rather sporadic until just below the cliff-bands at about 11,000’.

Booting up the bottom of the cliff bands.

Once above the cliff bands we followed the valley to the Willow Lake.

The ice falls at Willow Lake are very picturesque- and the photos don’t do it justice.

Getting past the cliffs around the lake require a bit of rock climbing.

We continued to skin for about another mile past the Willow Lake.

But we were a bit concerned about the weather. Though there was no snow predicted, the forecast for the day said winds would be between 15 and 25 mph with gusts up to 40 mph. This continued to worry us as we passed by Challenger Point and saw a series of spindrifts. 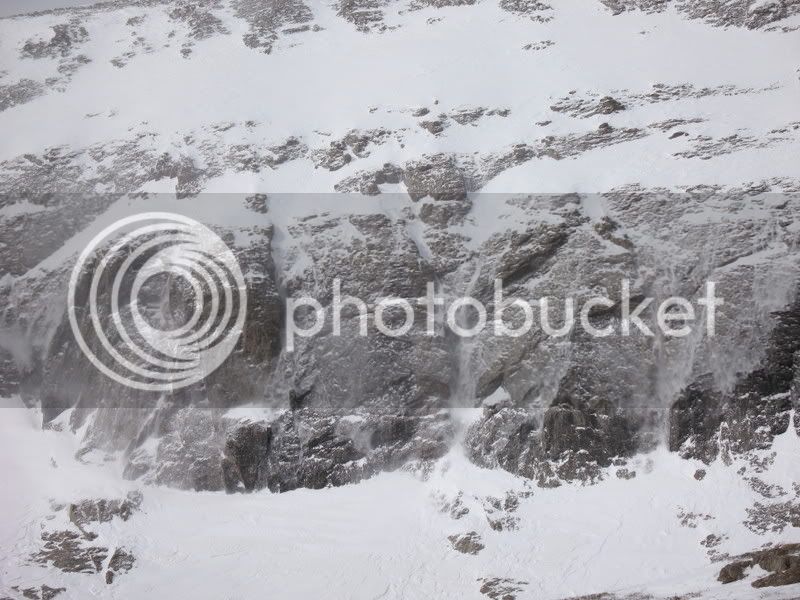 But, when we spotted the Outward Bound Couloir we decided we should give it a go.

Mark approching the top of the couloir.

When we reached the top of the couloir, we took a look right and we were a bit disappointed. From the limited view we had, the amount of snow on the SE face didn’t look promising. But, as we rounded the corner more we could see that the SE face was in fact holding plenty of snow to ski! We were in luck!

Mark led the way to the summit.

The snow on the SE face was difficult. It was wind affected, sun affected, and sugary. At times, there would be a thin suncrust on top of sugar. Other times it was pure ice.

We reached the summit around 1 pm.

View to the north. 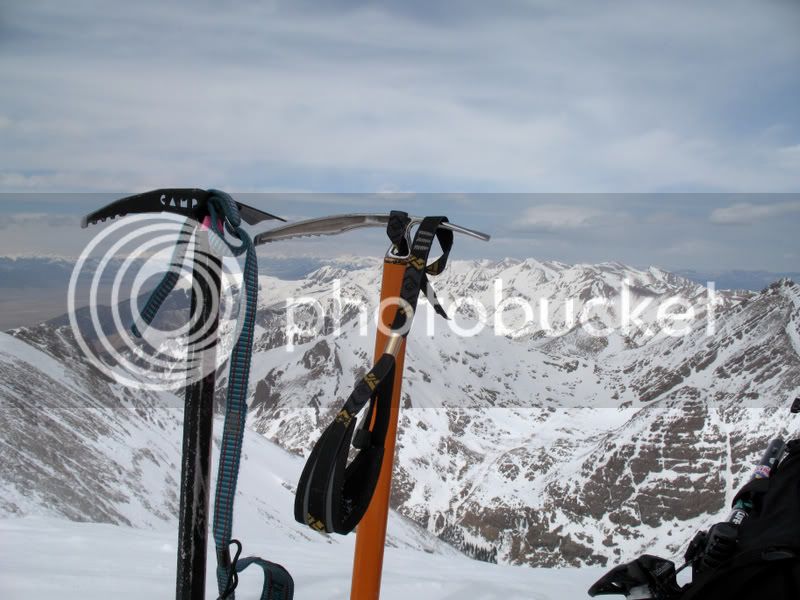 Pikes Peak in the distance.

The nearby majestic Crestone Peak.

Humboldt in the background, with no snow as usual :rolleyes2

The Blanca Group (looking rather thin on snow) towering over the Sand Dunes.

By the time we reached the summit the weather had broken for a bit. We had low winds and nice temperatures on the summit which allowed us to spend at least a half an hour enjoying the summit views.

But, eventually it was time to ski. Frank skiing from the summit

Skiing the southeast couloir was one of the most difficult things that any of us had ever skied. It wasn’t that it was that steep or even that icy. It was the sheer variability and unpredictability of the snow. You really didn’t want to fall because a fall in those conditions could send you for a death slide down to the bottom of the wrong couloir.

Mark made it look pretty good too!

Me on the SE face.

Rather than following our exact ascent route, we felt it was better to avoid the sugary snow and ski the SE face down into the South Couloir (also called Cole’s Couloir). We then booted up a few hundred feet back to the notch where we connected with the Outward Bound Couloir.

By the way, the South Couloir looks to be in condition, but not for much longer. It’s melting fast!

Me and Mark preparing to ski at the top of the couloir. By then the winds were howling again!

From there, we picked our way down the valley to the lake.

One last look at the wonderful ice falls.

Mark skiing down toward the cliff bands.

This is how Frank celebrated 🙂

The day was long, 14 and a half hours round trip. But, it was worth it! The climb was probably more fun than the ski. And we lucked out with the weather as the winds settled when we needed them to settle most. Most importantly, he partly cloudy day afforded us more time to reach the SE face.